I was facebook surfing today (I do this a lot) and came across some photos posted by Chuck Welcome... a dashingly handsome man who has been a set designer around the Atlanta theatre scene for a good long while... his partner, Robert Egizio, is the Artistic Director for Stagedoor Players in Dunwoody, a great little black box theatre where I was blessed to be able to hang out for a bit during 2003-2005 or so. During most of the time I worked there my dear Mr. Drake was Artistic Director which is how we became chummy. I downloaded some of the photos Chuck had posted of shows - the ones that I had a part in - and I thought it would be fun to share with you. Plus, I feel like all I've talked about lately is the fur babies and genealogy... you're due for a break! 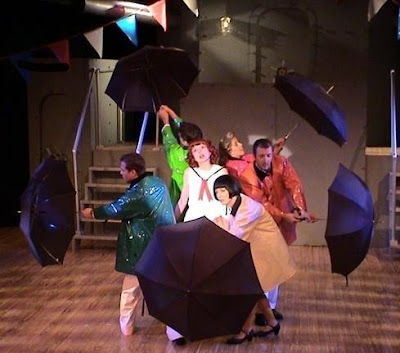 this is Dames At Sea, 2003 -
I didn't have a WHOLE lot to do with this production other than finishing up the costumes when the costumer became a bit overwhelmed with other projects. I spent a few days working long, long hours (once until 2am - which is shockingly late for me, even then!) to get this show finished up. My great find for this show was sailor suits for the men. Stagedoor has a really limited budget and initially the sailor costumes were being rented for about $900... I went to a fabulous lady with an enormous costume warehouse in Griffin, Georgia and rented them for $30. The raincoats, I believe, came from Burlington Coat Factory. This was a 40's style musical with a lot of happy music. 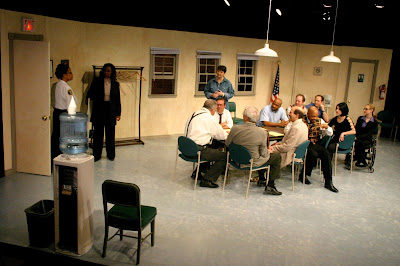 I think most people are familiar with the play, Twelve Angry Men. I costumed this one all by myself and while it didn't require the razzle dazzle of a musical, it's tricky to costume twelve people, at least half of them men, to look "court room appropriate" without having them all dressed alike. You have to think about things like not having two actors who are sitting side by side wear the same color shirt, and so forth. My big victory with this show was with Teal, the girl in the wheelchair. (you may have seen her in a Liberty Mutual commercial... she's awesome!) Teal was more comfortable choosing her own clothes - several of the actors did - and so I had enough money in the budget to pay for her to have her nails done for the show. Since she was rolling herself in, and it's such a small theatre space, I knew that attention would be drawn to her hands. She looked great! 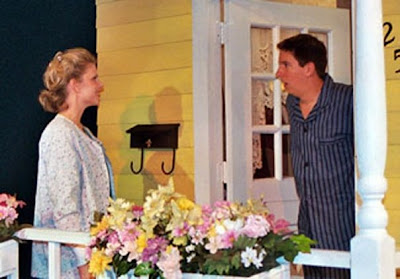 Over the River and Through The Woods was a play about the generation gap... and how we work so hard to build a better life for our children and grandchildren, to the extent that we end up being unable to relate to one another. The costumes weren't terribly complicated... the girl on the left was a nurse and the actress in the role had scrubs (a huge money saver) and the costume closet had a pair of pajamas that fit the other actor pictured here. 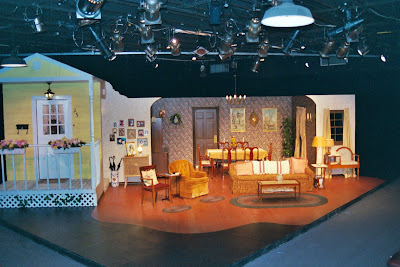 It's tricky in a black box theatre to design sets because you don't have the luxury of drawing the curtains and changing the set away from the eyes of the audience. You kinda have to put it all out there... with the exception of a few rotating pieces... and you have a limited space to create the story. Chuck's sets are always a great use of that limited space, as you can see here.

Another great example of that whole creative set design process. This is the set from Crossing Delancey. You may have seen the movie that came out in the 80s... basically it's a Jewish girl who is looking for a husband... or rather, her grandmother is pushing her to look for a husband. The park set in the middle of the stage served as a transition point... and at one point we had to go from one day to another without the actress leaving the stage. We had to give her a costume that allowed her to "change" without seeming to change... in about five seconds... and the other fun thing was that it was set it in the 80's... so we had a major "Dynasty" look about things. 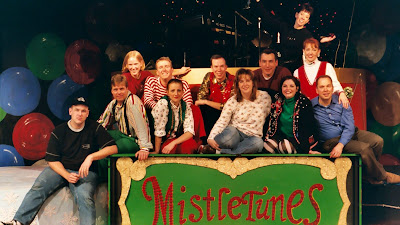 I posted the costume sketches for Mistletunes about a month ago... it was a Christmas show written by Rand Hopkins (who passed away in 2005). It required really over the top costumes for the actors who were all "Christmas Nuts" (except one - the guy in the super subdued costume on the right). My great find for this show was a sports coat on which someone had painted a very elaborate Christmas scene that fit a tall actor PERFECTLY. Another great find was footy pajamas for the same really tall actor that we were able to borrow from another local theatre. Costuming on a budget... and usually my budget was less than $300 per show... required begging, borrowing and stealing. Ok, I never stole. But it involved a lot of begging and borrowing. 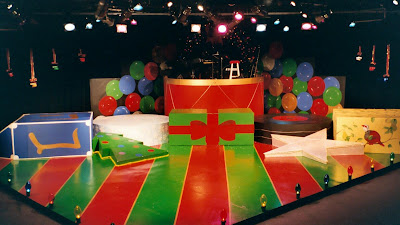 The set was soooo fun! You can see how the different aspects of the holidays were incorporated. The band sat on top of that drum. 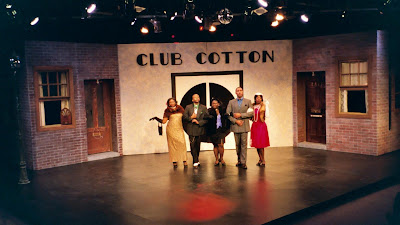 Ain't Misbehavin' was a personal triumph. This was a really difficult show for me to do because we had two completely contrasting color schemes... going with drab browns in the first part, like sepia toned photos... and then bursting with color in the second act. It's a high energy musical... with a play, you really only have to make sure your costume looks good from about 30 feet away so you may have people taped or pinned into costumes.. hems don't have to be as permanent... you have a little leeway. With a musical, especially when the actors are singing, dancing, doing a lot of belting (with deep breaths) you need to make sure the costumes are durable. That was tricky as - I am not a seamstress. 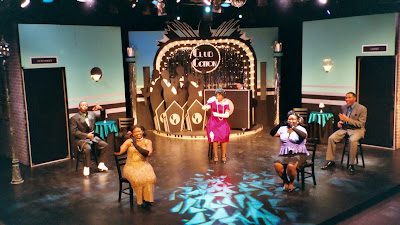 You can see how the stage transitioned from the drab exterior in the first picture to the colorful interior in the second. You can also see how the lighting changes the perspective of a small stage. These technical aspects of a production are done by people with way more training and expertise than me... and it was always a treat for me to see how things came together, with each person adding their own talents, in addition to the actors, it always felt like magic. 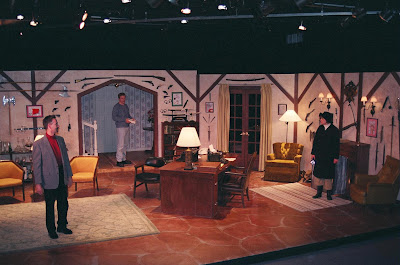 Deathtrap was a great play... and presented a few challenges... one was having an actor who was outside of the standard size of what we had available in the costume closet and outside of what I would be able to find at a thrift store (my usual go-to for inexpensive clothing). He needed a suit... and there was no way I could have come up with the budget to buy one new... fortunately, he had one that he was willing to use for the show and we took care of dry cleaning it for him after each weekend of the run. Another tricky situation was having an actor who had to be bloody and muddy - but he first appeared in the outfit without it having anything on it. The most unlikely find... I found two of the exact same outfit at the thrift store in exactly his size! It was insane! So we had our nice outfit and messy outfit. 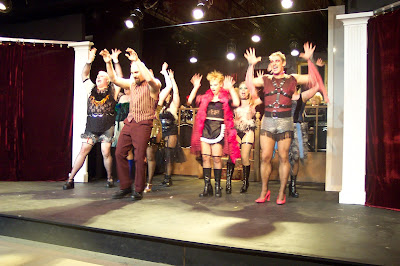 During this same time period, I was able to help out on the Rocky Horror Show at Onstage Atlanta. My contributions were minimal... I spent a few long, long days putting fringe and fur trims on the costumes... bedazzling things... just the finishing touches. During the run I worked in the front of the house, working as an usher, selling concessions, and just pitching in wherever needed. It was an incredibly fun show to be associated with and I could write a whole series of blog entries on the things that happened then. 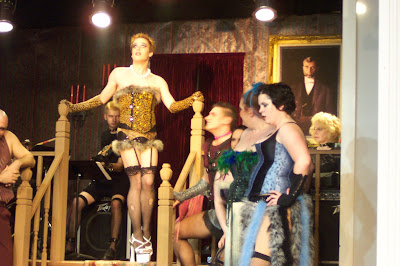 
So that's a little peek into my wild and wacky, albeit brief, theatre career. Hope you enjoyed  it... and I hope Chuck won't mind me sharing his photos (and plugging these great little theatres!)

God, some of those shows were fun! And I especially had fun with you working on them!

Say this too. Robert & Chuck have been so good for Stage Door. Truly, my hats off to them!