Continuing my effort to blog less but more often...

It's the noon hour and I've already accomplished a lot today! I do have a bit of a routine and it helps, somehow. There is something calming in doing things in some semblance of order. So far today I have:

done my Italian lesson on Duolingo. I could in no way converse in Italian but I find that I'm recognizing words more easily. I'm much better at translating Italian words to English than I am at finding the Italian words from English.

I took Austin to the store for something he forgot yesterday

played a few rounds of Yahtzee - my new time suck 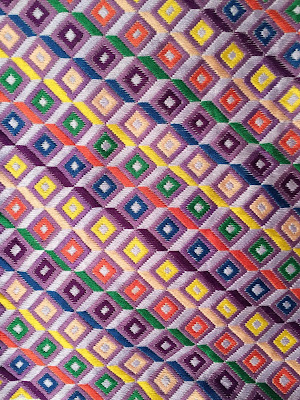 (left) finished my latest embroidery project - it will be a pillow whenever Mom feels like sewing a back on it. I've got a feather pillow that looks like it went through a massacre. I'm going to use the feathers in this pillow. Now I have to find my next project... I went ahead and taped off my next piece of fabric. I like to let it sort of unwrinkle under a pile of blankets before I start to work it.

had lunch - the second half of the Chickfila wrap I had for dinner last night. I tried the new "superfood side" at Chickfila. It's a kale salad with a maple vinaigrette, broccolini, dried cherries and roasted nuts. I liked it a lot better than cole slaw, the item it replaced in their menu.

I watched a documentary on Asa Carter - a segregationist from Alabama who wrote The Outlaw Josey Wales and The Education of Little Tree under the name Forrest Carter. I'm always confused by the idea of segregation... like... how did that ever make sense to anyone?

I watched a book talk on a book about the history of autism. I didn't realize that the first diagnosis of autism happened in 1943. Mind blown. To realize that it's that recent of a disorder and that at first the mothers were blamed so the common practice was to separate the child from its' mother... crazy! In our case, more than fifty years after the first diagnosis, I felt blamed for Austin's "behavior problems" and had to become far more of an activist than I wanted to be. It's interesting to realize that my experience was very similar to those originally diagnosed.

Anyways... so that was my morning. This afternoon I plan to catch up on my favorite vloggers on Youtube, find my next embroidery project, work on Ancestry.com and play some more yahtzee. My parents are going to see Jamie perform in Honor Chorus so I'll be doing a bit of Oscar-sitting - or as I like to call it, "Oscar-verting" - like introverting but with a dog.

I'm trying to decide if I want to buy a mini-keurig machine. Austin got one last week and I'm sort of jealous. I don't drink coffee often and I can't drink much because it aggravates my tachycardia but every now and then I would like to have some. I could just get a regular old coffee pot but I would never drink more than a cup at a time so it would be a waste. I don't know. It's not crazy expensive but I can't decide if it's too much of a splurge for a couple of cups of coffee a month. Also, I think I'm going to have to get a new digital camera because mine is on it's last legs. Not a life or death decision but just part of what's happening in the Life of Heather right now. I could afford to get both but I try to be frugal and not just buy every little thing my heart desires.

Tomorrow I have a hip injection. I'm not sure exactly what's involved, I just know I can't have anything to eat or drink for 8 hours before. With my sore throat - that's still here even after being on antibiotics since Monday - that's going to be really miserable. I'll definitely be using chloraseptic. 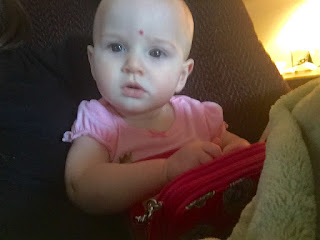 Bordering on a longer blog than I intended so I'll wrap things up here. I'll leave you with this picture of Cosy and "her" purse that I took right handed with my iPhone so it's not a great quality picture but she looks SO MUCH like I did as a baby here that I love, love, love it! Austin commented this morning that she has really started to play. I couldn't think of a better way to describe it. It is so much fun to see her discover the world around her! She loves opening and closing the purse and looks for the copy of her dad's drivers license (that I keep on hand in case he loses his wallet and we need the license number to order a new one). She finds her dad and puts the paper beside her face and says, "oh... dada". She likes to pull the cards out of the card holder. I've added lots of business cards and expired gift cards for her to pull out. She pulls them out and then puts them in and closes it again. I'm rattling on like an obsessed grandmother... but I do think she is the most amazing baby girl!

Hi Heather, what sort of hip injection are you having? Is it a cortisone injection into the bursa? If so you can eat and drink like normal but if it's for something else then best to follow their instructions. I have them every 6 months and they work wonders. If that is what you're having I hope it works well for you too. Oh and keep the baby spam coming. I love seeing those little faces!
Hugs from Oz...xxx