Feeding Time At the Zoo

My Uncle made it through ten hours of surgery yesterday and is expected to remain in ICU for the next few days. The surgery was complicated, there is infection and he is still in need of much prayer. My Aunt (his wife) has also not been well and this hospital stay creates a hardship for her, so if you would include her in your prayers.

And for my mom who, like me, really struggles with pain and fatigue, to spend an extended time in the hospital like she did yesterday was truly an act of will.

Fortunately Cody ended up having a shorter work day than expected so I didn't have to go pick up Marquee from school which meant that I was able to take pain meds after work as usual and it was a much easier day than I had expected. I had Doggie Daycare Duty but the furbabies were cooperative and even ate for me - crazy as it may seem - these dogs won't eat unless my mom is home. It's like they go on mini-hunger strikes when she isn't around. And Oscar, the rotten little dachshund, is normally fed by hand. But we managed yesterday.... I put Oscar's bowl on the stool that he and Stubby use to climb up on my bed and he went right to it and ate most of it.... and then we both started worrying that Lily the Greedy Big Girl was going to go after it. She's a sweetheart unless food is involved and she'd chew your arm off if you got in between her and something she wants to eat.

Then I moved his bowl to the arm of my recliner... and had Little Trouble Kitty on the left and Hungry Oscar on the right. 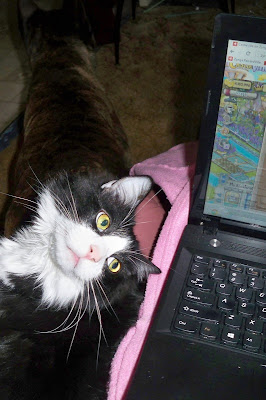 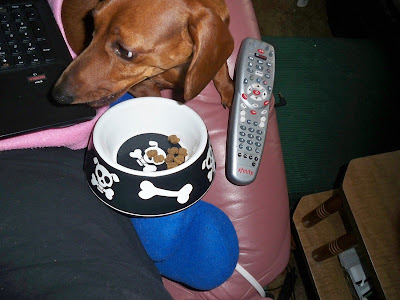 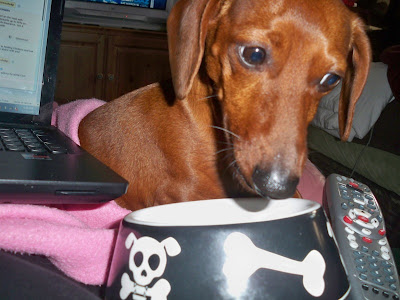 I was a little stuffy after work yesterday but today I'm a full fledged snot factory and sleeping under a draft where Trouble is trying to tunnel out to the bird's nest on the window unit didn't help much. It's hard core misery. Relatively speaking.

All of it is relative, isn't it? Anyways... it's Thursday and we're tucked in the nest today...