It's a creepy dark Monday and I have no idea what time it really is. Days of sitting on the nest and time change has me all turned around. I'm hungry. I'm in ridiculous pain, all over pain, this is a fibro kind of pain more than arthritis because it hurts in every part of my body. Trouble the cat is being a rotten little monster, throwing anything and everything he can down on the floor. It's not a good day, at least not so far but it's my job to turn things around... to take this ugly, dark, frog of a day and turn it into Prince Charming. Or some other similar metaphor.

1. I've solved the sequester problem. Several of them, actually. Instead of paying the White House calligrapher 100k a year, give those Obama girls a big pack of sharpies and put them to work. Instead of cutting back on tuition payments for veterans, cut back on the salaries of those do-nothing politicians. The soldiers did their job, they deserve their benefits. There hasn't been any progress coming from Capital Hill, they don't deserve to get paid. Instead of passing out Obama phones to everyone on assistance, give them an orange juice can and a string and tell them to get busy. I could go on but I won't. You get the point.

2. My hands ache. It's going to rain. That's not a reason to love Monday other than explaining the pain, at least in part.

3. I made coffee this morning. It's so thick you have to stir it with a knife. It's hopefully the kick in the pants I need to get me moving today.

4. I don't go to work until 10am. The goal is to get through four hours and if I'm still functioning, make it longer. Going in an hour late will make it feel like the whole "spring forward" thing never happened.

5. Crazy Britney is back. She was keeping it together pretty well for awhile, what with the Daddy and Fiancee both serving as Conservators but it looks like someone is off her meds again and although it makes me sad for her and it's completely wrong to be amused by someone else's dysfunction... I have to admit that I get a chuckle out of seeing her at her sons' soccer games wearing nothing but a sundress and fuzzy boots. And nothing else. Because who forgets their underwear? Crazy people, that's who. And no matter how bonkers riding the Pain Train makes me feel, I promise that I have never forgotten my underwear. So... I'm not the craziest person on the planet.

6. Have I mentioned that my hands ache? Mercy. That's not a reason to love Monday, I just can't think of anything else. OH... here's one... turns out that Austin is working, at least periodically, doing construction work with his friend. I want him to learn a few marketable skills. I want him to be able to make a living. He's young and it's a perfect time in his life to learn what hard work feels like. Hopefully that will convince him to use the college money available to him so that he can work smart instead of hard.

7. Speaking of hard work, it was a rare morning where I get to see both of my older boys before they leave for work. Ryan made a pit stop here (next door) on his way from PA to FL. He's got a job in Naples, FL this week and hopes to be headed home in time for his girlfriend's birthday on Friday. Cody's working out his two week notice with his dad's company and they were actually leaving on time for once in a blue moon. Cody is leaving on great terms... the boss at the old company told him if things didn't work out, he was always welcome back. Leave those bridges in tact. That's the way it should be. 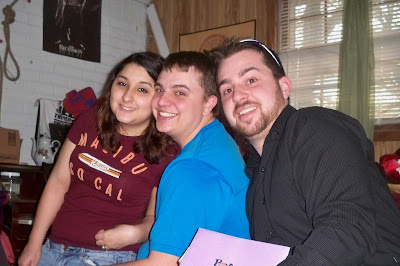 
Time is getting away from me... the world has come to wake here so I can't have consecutive thoughts. I like to stretch it to ten Reasons to Love Monday but I've run out of time. Hope you all have a great day...

Love and hugs y'all.