Grandbaby #2 Is On The Way!

I am so tired but so excited!

First... Thanksgiving was a great (but long) day with lots of food and family. We hosted (my parents hosted I should say because all I did was show up to eat) and I made a real effort to sit at the table and entertain guests all day. tasha was able to be with us, which was awesome. (They're back on again so things are good with Cosette's parents for now!) We had the best time with my Cousin Christie's little boys who were in Heaven with our craft supplies. No toys but I've got glitter for DAYS! They were adorable and we had a blast with them. Christie was the one who rescued Little Kitty from the pound. They intended for him to be an outdoor mouser for them but he was SO CLINGY and affectionate that he drove Christie's husband Nathan NUTS! He was destined to be the cat of a very sedentary person - a match made in Heaven for me! Anyways... back to Thanksgiving... Jim and Angie had to do a family thing with her family and came later in the evening. I was absolutely wiped out by the end of the day but my last visitors were my two favorite redheads so all was well. We watched Cloudy With A Chance of Meatballs and enjoyed lots and lots of dessert! 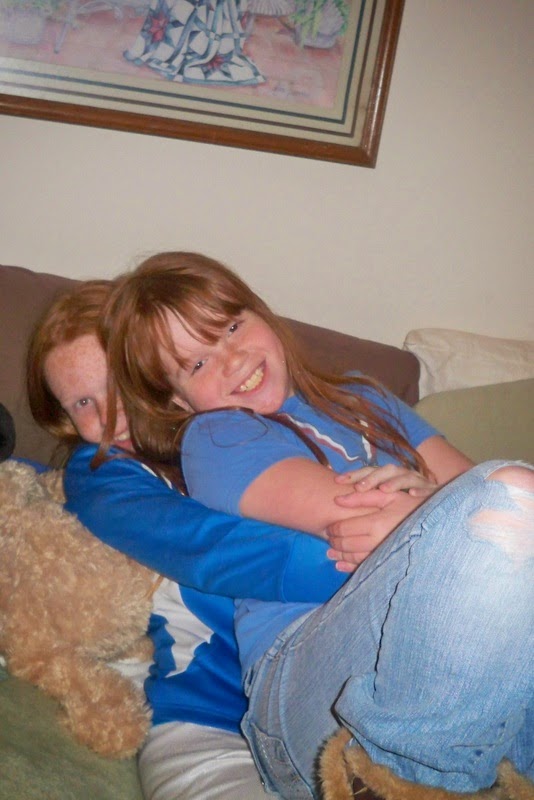 These two were worn out, especially Sarabeth who (much like me) can only take so much human interaction before needing to introvert for awhile. We developed the air hug for such occasions. Jamie could entertain for days and never miss a beat.


Yesterday I got up, went upstairs to scrounge for leftover pumpkin pie for breakfast and came back down to get busy sewing since I had taken a day off for Thanksgiving and still have approximately three projects to complete before Christmas and two that are just about finished but need a few little tweaks. (sorry for the run-on sentence). I was doing my morning routine - making sure the cats have food and water, getting my drink and getting settled into my sewing nest - when I realized that my left leg wasn't doing it's job. It's numb but not completely numb. It feels like it won't hold my weight. It's that shaky feeling you have when you're really sick. This is what happens when I sit upright in a regular chair/regular sitting position. It's not just the pain that makes me uncomfortable and keeps me from living a normal "seated" life.  It's the problems that I have in the days afterwards from the compression of nerves and the inflammation that gets everything all in a tizzy. As the day went on yesterday it got progressively worse. I couldn't wait for bedtime.

I was settled into my nest and highly medicated at nine-something, about to fall asleep when Austin came through the living room saying, "I just got a call from Cody to come upstairs and let them in..." At dark-thirty? When they live 100 miles away? On a day after we last saw them? I knew something was up! Cody, Marquee, their friend David and my granddoggie Sammy came in. Marquee gave me and my mom each a wrapped gift and told us to go ahead and open them. Mine was the book, "I'll Love You Forever" which my kids call "The Crying Book" because I could never read it without crying. Being rotten boys who tease their mom incessantly they would hand me the book to read so they could laugh when I got teary. I mean, I'm the mom who cried every single first day of school and my kids always got a giggle from it. Boys are like that. Mom's package held a book of Grandparents Memories to fill in for baby.

That's right. BABY! As in, Grandbaby #2! Due to arrive about 2-3 months after Grandbaby #1! They came all the way up to tell us in person. I'm not sure what my reaction was because I was pretty well sedated from my night meds. My dad did some kind of double fist pump jig that you really had to see to understand. The funniest part was that their friend David had NO IDEA why they were coming to see us at night on the day after Thanksgiving. They told him they had some kindling to bring up here and a cat climbing stand and he was just happily along for the ride. His reaction was also quite hilarious! Oh, to be so young!

Of course, my next question was, "can I blog about it?" because it's way early - about six weeks. They did a mental roll call of everyone who needed the info before I broadcast it to the internet and I was given the ok. I posted to facebook last night but didn't give the details of how they told us because I was really REALLY sleepy. I didn't trust my storytelling ability although I'm not sure it's any better now.

My mom took a few pictures last night but I don't think she's posted them yet. I'll snag them and include them on my next blog entry.

So two. I'm getting TWO grandbabies next year! I posted Ryan to see if he and Sara were going to go for the triple crown and got "Not. Right. Now." as a reply. Teehee. They've got until March to change their mind. The grandma clause - for me to change my allegiance from Florida to Florida State if I got a grandbaby - include a provision that if I got three grandbabies in a year I would get a tattoo of Osceola, the Florida State mascot, stabbing a spear through a Florida Gator. SO it's better if we stick with two babies for now!

Time to get started sewing and get ready to watch football all day. Love and hugs, y'all!

This is such a wonderful announcement! I'm happy for you and your family! My kids blessed me with three in one year. That's how I got broken into being a Grandma! You're going to have so much joy!

Wow!
Happy Thanksgiving and everything else.
m~