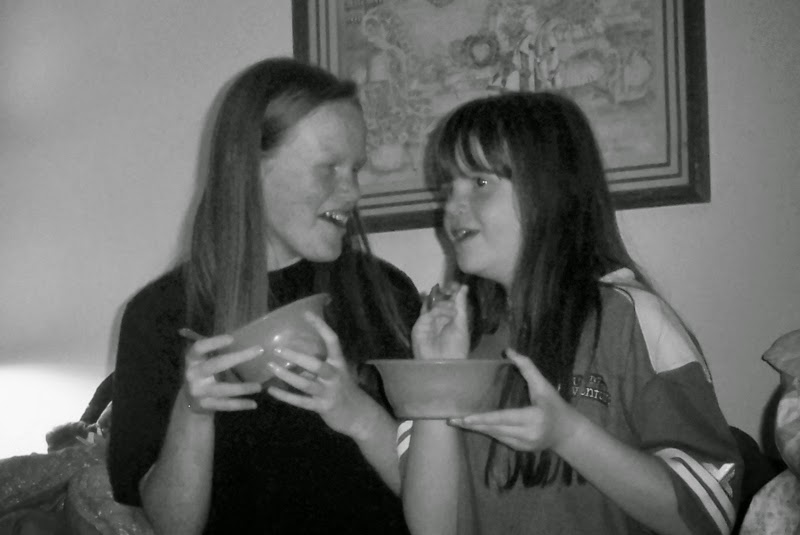 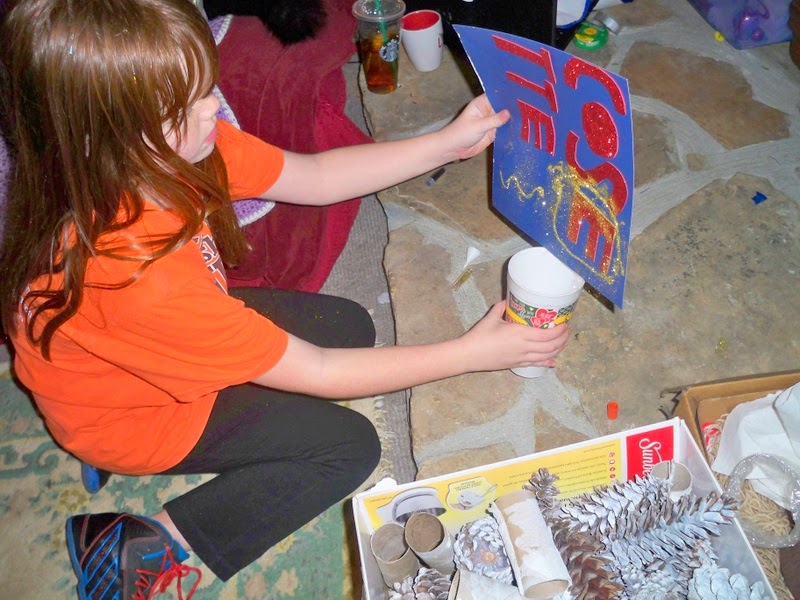 Just a few photos from this week thus far...

Monday I picked up Tasha and we made a run to Ingles to get a few things and then came home and decked the halls. Sorta. I've still got a lot of ornaments to hang but I ran out of steam. 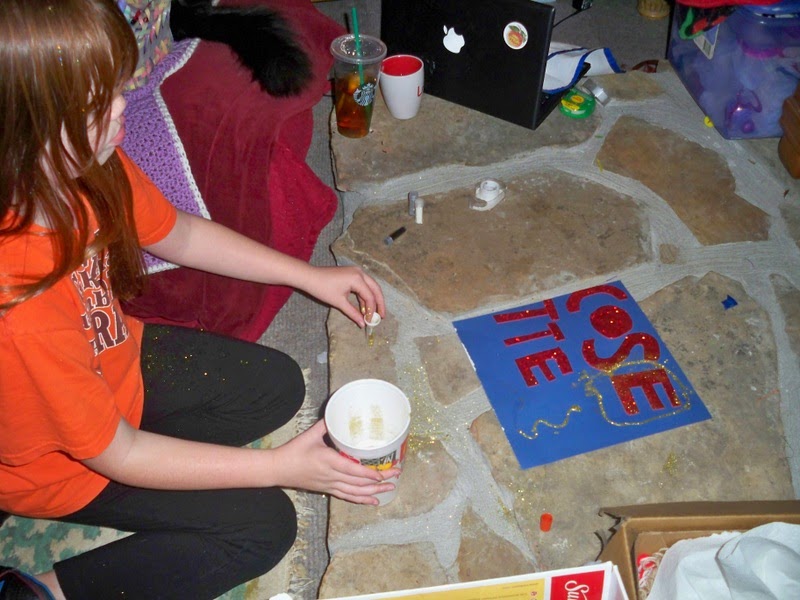 Tuesday my nieces came over and we made name tags for the TWO countdown chains I have for grandbabies. 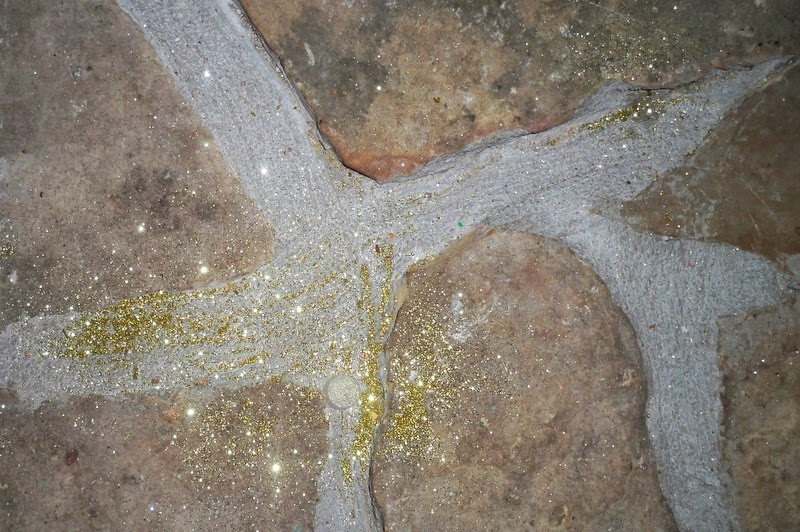 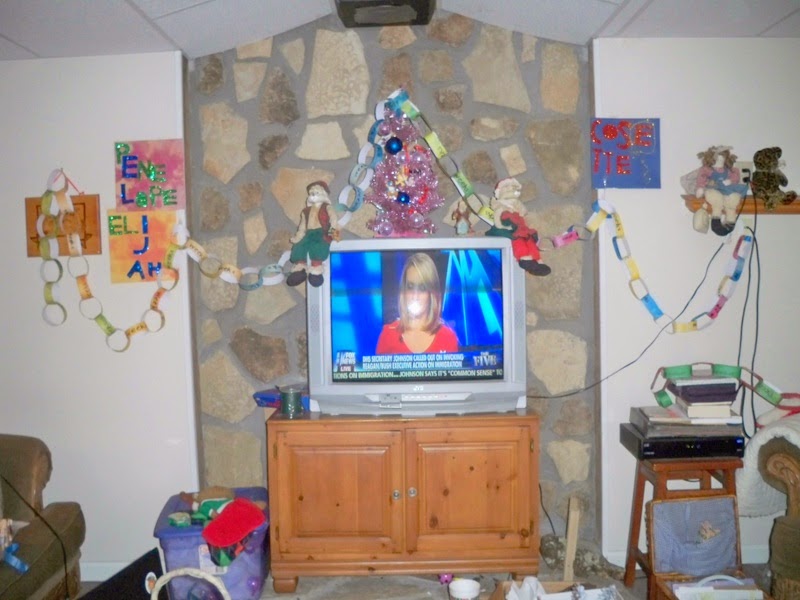 
Cosette - Grandbaby #1, is due 5/5/15
We're still leaning toward Camille as her middle name because Cosette Camille translates to "perfect little thing".

If he is a he his name will be Elijah Joel Espericueta-Sauls. Joel - like noel, not like Billy Joel. It's his maternal grandfather's name. The last name will be both Marquee and Cody's last names. They have been married since 2010 but Marquee kept her name.

Cosette's layette is feminine safari stuff - like pink giraffes and elephants and stuff. Super cute.
Elijah/Penelope's layette is Disney stuff. His first visit to Disney will be next October and we're hoping the whole family will be able to go along. I haven't been since I was 12! Cody and Marquee go at least once a year. 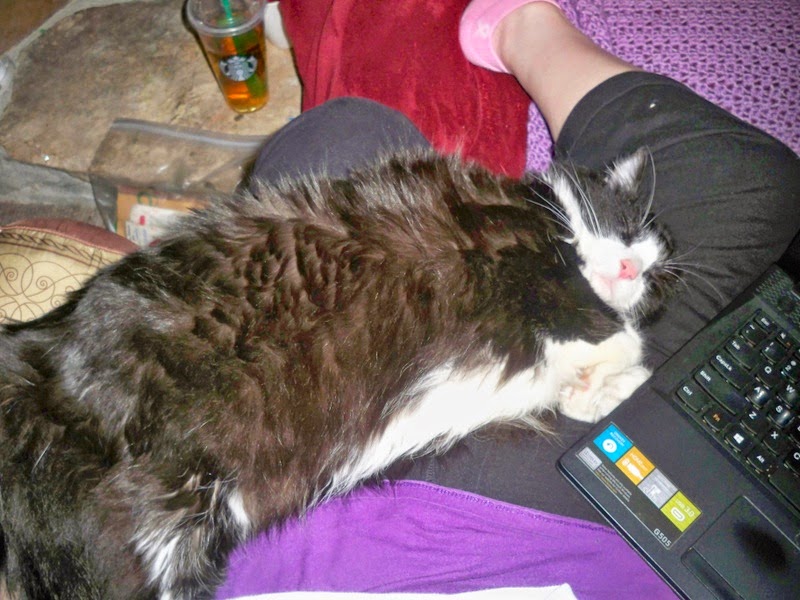 Also this week... big fluffy Little Trouble Kitty takes over my lap and pushes the laptop to the side. He Who Must Be Cuddled gets rather jealous when I spend my time cross-stitching instead of paying attention to him. He's a big ole love sponge. 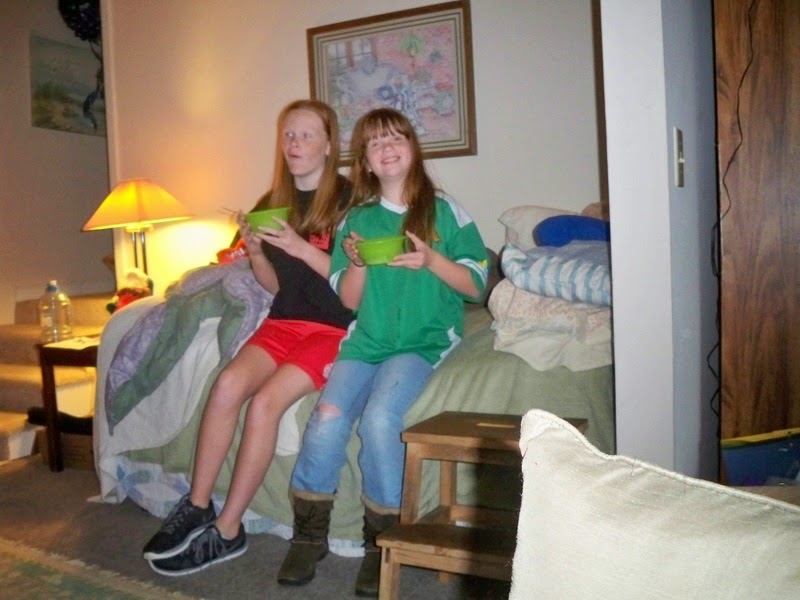 My crazy girls! When they're here on Wednesday it's for a very short time because then Pop takes them to the library and to church for dinner and stuff.... but there's always time to squeeze in a bowl of extreme moosetracks ice cream. Today they watched about ten minutes of Space Jam (remember that one?). I wasn't sure they would have heard of it but they were full on going synchronized ice cream eating while singing along to the movie. 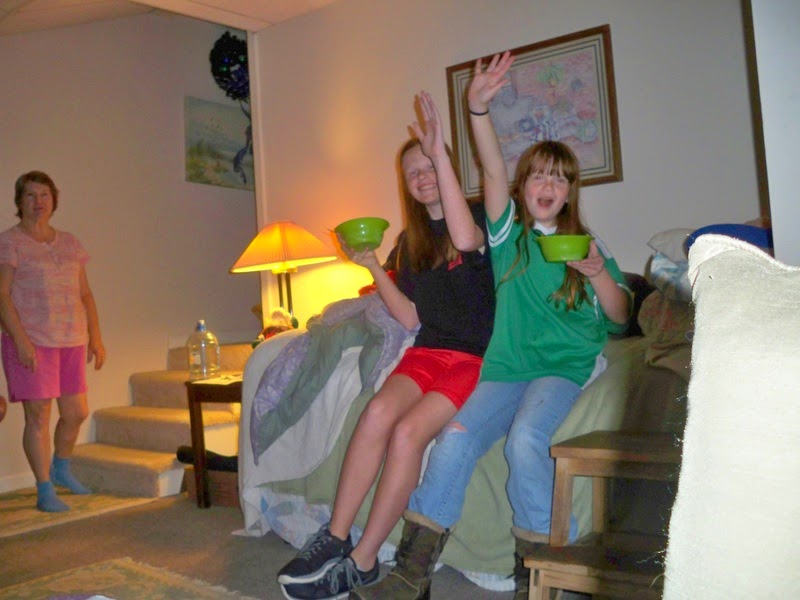 Including raising hands in the air and all that stuff. They are too, TOO cute together! I mean, yeah, there's a little "scoot over sister" and "let me hold the remote" and all that going on occasionally but they are just everything that I thought sisters should be. In a way I am sad that I missed out on having a sister... or being mom to girls... but honestly, I just feel like I'm living a bonus life right now having these two sisters who out of this whole big house full of potential red-head spoilers could be anywhere and yet they prefer to curl up in my Whine Cellar on my cozy bed with my remote control! I am blessed beyond measure.

The thought of having all this sweetness in my life and adding to it two new little babies just makes my heart overflow!

I have this elephant in the room in the form of my disability case, the anxiety of waiting for a decision and feeling so very, very afraid that I'll be declined. ... trying to figure out how I ever would/could possibly be in a position of earning money again. It's heavy on my heart and it really causes me a lot of tears and anxiety. What will I do if I'm declined? How would I work? I'm still in pain from the sitting I did at Thanksgiving. I'm taking my dad to the eye doctor on Friday so I have to be careful about I do tomorrow. Jamie and Sarabeth have a play at church Sunday that I just about have to go to or be kicked out of the family which means I'm got to figure out a way to sit because this week even my reclined position isn't working well. I've got hip pain that words cannot describe. I don't want to miss a thing. God saw fit to put me here in this place where I get just as much sweet, little girl time as I can stand and I want to be there for them. It's hard to explain pain to young, healthy people. I'm already having anxiety about going on Sunday. I even asked if I could go to watch their final rehearsal... I'd be able to hit my reclined position. But I don't know if that's allowed. If it is... bonus for them... I can give them notes and get good pictures and maybe, if I'm not dealing with pain on Sunday I will have already seen the show.

I don't know. I just mention it because I want to be transparent. Inevitably blog readers are interested in what you're going through because they know some one or ARE some one who is battling the same things. It's hard for me to appear in public, even in a church where the people I love in the world are loved because I have to either medicate the pain or mask the pain and both keep me distracted and distant and emotional and embarrassed.

Anyways... just felt like sharing these few things! Hope your week is going well!
Love and hugs, y'all~!

Love the name Cosette Camille. Very pretty. I hope it wouldn't get tagged "CC" for short. That would be a waste.
The names for baby #2 are also nice.
I have no clue but I hope you will get an answer very soon re: SS. That has to be a real PITA for you. I understand the social anxiety but try not to think
about it so far ahead. They are your family. Yes, you are blessed!
Maybe you should post more on your blog. :)I don't do Facebook.
(my keyboard is wonky today)
take care,
m~