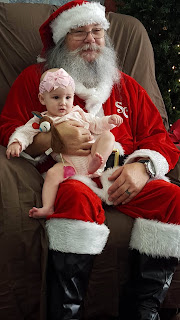 I had dental work done on Monday and it's been waaaaaay less painful than the last round. This morning it's a bit tender and the familiar aching in the jaw has kicked in... The Evil Gut Pain decided to visit today as well so it's sort of a Perfect Storm for a Pity Party. Mom doesn't have her results yet. Still. And we are so weary of waiting. I'm nauseated and congested and just generally dealing with the Yucks today which means.... it's time to find Reasons To Love Wednesday!

1. I no longer have "Mondays"... no reason to gear up to face a long week. I just have these occasional days where I need a little morale boost. It's so much easier to handle a raging case of the Yucks when you don't have to shower... dress for work... drive to work... face customers all day... I'm so grateful that my disability was approved because days like today make working impossible. I don't have to make that guilt filled call of shame to call in sick. I just curl up in my nest! 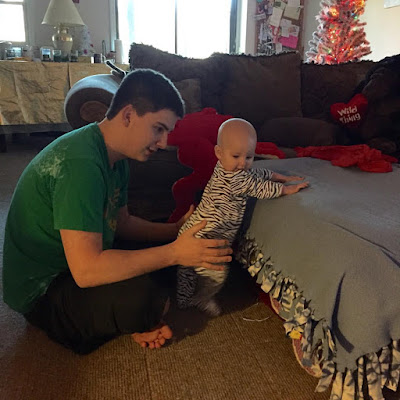 2. Austin, Tasha and Cosette have moved in with us. It's been so much fun having a baby in the house full time. They're on the top floor so I can't climb up to see her just whenever but everyone is good to bring her down to visit a couple of times a day. Even when she's not down here in my nest I can hear her little giggles and I can hear the joy in my parents' voices when they talk to her. She is exactly what we needed in this season of life. Having Austin and Tasha around to help with things is also a bonus. My mom and Tasha are the people I confide in the most... having them both close by helps.

3. My tree is up and sort of decorated. I just do a couple of ornaments and rest. I can't do anything while standing for more than a few minutes at a time because the muscle spasms kick in so it's an ornament or two... next time I get up to go to the bathroom or whatever it's another ornament or two... 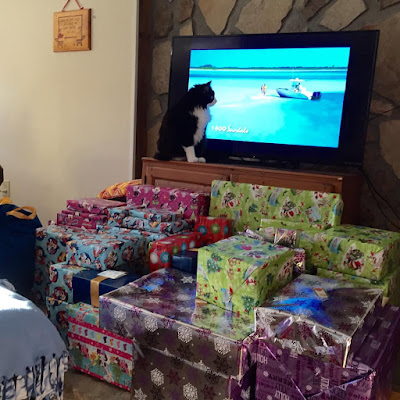 4. We have a massive pile of presents already wrapped. I have been Christmas shopping since September and although there are a few things I still want to get, if I had Christmas today no one would leave empty handed. I wrap a couple of presents a day. Mom wrapped several last week. Some (the ones from my brother and sister-in-law in New York) come already wrapped. We've put them on the stone hearth instead of under the tree just in case we have another flood. You never know. I started out giving everyone a specific type of paper but we have so many gifts that some people have run out of their original paper! It's the first Christmas in my adult life that I haven't had to decide between eating or giving gifts. I like it this way SO much BETTER!

5. Balsam scented candles. I'm addicted to the woodsy/green scent. I bought two Yankee Candles and a bunch of cheaper ones from Walmart. I especially love the way it smells when you leave the room and then come back in and are greeted with the scent of candles burning!

6. I've been watching a lot of old episodes of What's My Line and To Tell The Truth. It's nice to go back to simpler times. A lot of the vloggers I watch are doing "Vlogmas" where they do special Christmas themed videos or just do more videos than usual. It's fun watching people from all over the world preparing for Christmas.

7. My grandma is going to be up here this weekend so we're finally going to get to take a five generation photo with grandma, Pop, me, Austin and Cosette. My dad is in a music program and my sweet aunt is bringing grandma up to see it.

8. I'm almost through stitching the names on our stockings - 15 this year. And then I can start on a new project! I get so excited when I'm picking out a new project! I've been combing through Pinterest for the past week trying to decide what to do.

9. I'm loving Wednesday because even though I started off in a lot of pain, I've got proper medication to help it go away and I've learned a lot of tricks to make things better... things like warm heat, deep breathing, prayer... In the two hours since I woke up the pain is better. Not gone but better.

10. Cody and Marquee (and Ollie) made it home safely from California. Her granddad is really sick in the hospital, though, so keep them in your prayers. Cody sent me the cutest picture of him yesterday with his little jelly belly poking out but won't let me post it because his little belly is hanging out. LOL!

We still don't have the results from mom's biopsy of the mass in her pancreas. She was feeling pretty good last week but in the past several days I can tell she's uncomfortable again. The doctor told her yesterday that it may be as late as Friday before we have the results in. I don't know if I mentioned it here... but her biopsy was sent to Emory for scrutiny. Still trying to determine if it's the return of the carcinoid type cancer she had a few years ago or if it's a different type of pancreatic cancer. I think they have eliminated the possibility that it's a harmless little nothing so please keep her in your prayers. We are so ready to know... and still hoping for good news somehow. 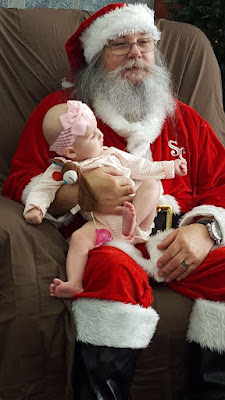 So that's about it for today. Hoping that you find lots of your own reasons to love Wednesday! Love and hugs!