Ever since Ryan was little everyone has called my mom "Mawmaw" instead of Norma... or mom... or whatever. Just like most people call me "Aunt Heather" or "Nana" or "Mom", my dad is Pop and my brother is "Uncle Bubba". We're Southern that way.

Yesterday a little before two, Mawmaw's doctors' office called and said they had what they needed - the results - and asked if she could come down to the office. It's about 45 minutes away so I had time to contact my kids and my brother and my sister-in-law to let them know that results were in and we were just waiting to hear back from Mawmaw. You know that the tell you good news over the phone and ask you to come in when it's bad news. I tried not to think of it that way but it's true. I used the time to make Russian Tea Mix - it's a mixture of ice tea mix with lemon and tang and cloves, cinnamon and allspice. I would give you the exact amounts but I don't measure, I just do it by taste and ... I'm not sure I got the balance right this time but it was a good distraction.

Mom has a neuroendocrine tumor in her pancreas. It's in the same carcinoid family as the tumor she had in her colon a few years back.... maybe 2010? It's a hormone driven cancer that is rare - only about 5% of pancreatic cancer is this type of cancer. It has to come out but the surgery has to be done at Emory (in Atlanta) so they're scheduling it as soon as they can. Once the tumor comes out I think they can grade/stage or whatever they do. If I understood correctly the doctor said this is the better cancer to have.

I'm going to cut and paste this next bit from the website listed above because I don't want to summarize it and get any of the information confused. It details the typical hormonal responses that can be caused by functional neuroendocrine tumors.


Pancreatic NETs make different kinds of hormones such as gastrin, insulin, and glucagon. Functional pancreatic NETs include the following:

I feel like my mom has had some of these symptoms, specifically the gastrinoma. Of course, all that will be sorted out by an oncologist who has more than a Google education. Just wanted to put this information here for family members, like my kids, who want to know as much as they can about Mawmaw's condition. I hope that my grandkids will love me even half as much as my kids love their Mawmaw.

The website goes into much more additional detail and if you're curious, I would encourage you to check it out. The bottom line is that she is in a good bit of pain and feels pretty crappy. Unfortunately the way chronic pain works is that you don't feel better just because someone else feels worse. I'm doing some things that my mom would normally do and struggling a bit in the process. I'm not able to take on many of her chores and I am nowhere near her attention to detail in keeping house. I took Austin to work this morning and Tasha and I did a little food shopping. When I got home from the store mom reminded me that we would need to pick Austin up from work this afternoon and I just about cried. I was hoping that my day would be over after grocery shopping. Tasha's going to see if her parents can pick him up.

So that's the long and short of it. Mawmaw will have surgery at a undetermined time in the near future. We'll know more when that happens and in the meantime we're just all keeping our spirits as high as we can! 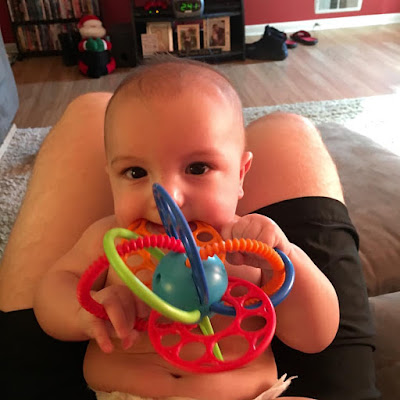 Cody gave me the ok to show the Jolly Ollie picture I mentioned yesterday. I never had chubby babies and I am just crazy about Ollie's chubbiness! You can't look at that belly without wanting to blow raspberries on it! And those dark eyes and fuzzy little head! I know I'm prejudice but honestly, I have the prettiest grandchildren!

I'll end on that happy note. Thanks for your concern and love and prayers for Mawmaw. I know she appreciates it as well. Love and hugs back to you!

Heather, I will continue to keep your Mom in my prayers..
Your grandbabies are adorable!

I was hoping that no news was good news.
Hopefully the surgery will be done ASAP.
I will continue keeping your mom and family
in my prayers.
That little chubby baby is too cute.
xo~m