That week went by fast. So has this month. So has life, here lately. You'd think it would be slow and boring-ish, being Winter and the fact that I'm home about 99% of the time but it's a speeding freight train. 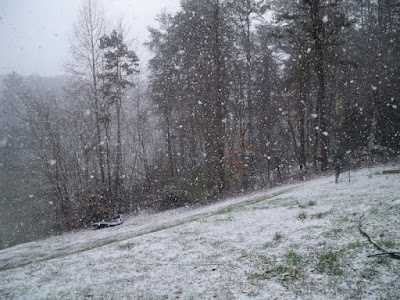 We had a little snow earlier this week and we're supposed to get ice, then snow between today and tomorrow. It feels a little like the Blizzard of 93, before Winter storms had names. It rained and rained and the Weathermen said, "oh it's coming...." and they were right, the rain turned to snow and it snowed a lot. More than I've ever seen, I think.  And we were young and (not so smart) and thought ... "wouldn't it be fun to get together a group of our friends to come hang out with us while we're snowed in?" For the record, it was fun but it was also a lot of work to keep everybody fed and happy.

I have had a love/hate relationship with wintry precipitation. I love a random snow day, love the beauty of the world covered in white... but I hated making the decision about whether or not it was safe to drive in to work. I have had a few really scary white knuckle drives and I've also had a few times when I was the only loser not to show up to work when the pavement was really, really ok.

My back pain started - well, exacerbated, I should say, my attorney found episodes of back pain in my medical records going back years and years but it got relentless and chronic starting after a spell of wintry weather. I hadn't done anything strenuous and I hadn't slipped or anything but it started after bad weather so the initial thought was maybe a pulled muscle. Little did we know that five years later... but... after that I couldn't risk it because I'm more likely to fall and a fall could cause a lot of damage.

Now I've got a kid who has to get to work regardless of the weather. I'm terribly proud of the fact that he has that work ethic that he can't be "the one who doesn't make it to work" but I'm so anxious about him being able to get home safely. The other day Pop parked the car at the top of the hill because our hill is pretty steep and if you slipped too much you could end up in the lake. The county sheriff lives past us on our private road so they'll clear a path for him to get in and out if possible so if we can navigate our driveway, that's about half the battle. It turned out that Austin got a ride home with a co-worker who lives nearby who dropped him at the top of the driveway. I felt relieved that Pop didn't have to go out in iffy weather but then I realized Austin rode home with a bag boy who probably hasn't been driving more than a few years. There is a motel across the street from his work and I suggested it as a possible alternative to someone making a dangerous journey. We'll see. I'm just hoping and praying that the streets stay safe until he gets home today and if the roads are bad tomorrow that they're bad enough that NOBODY would venture out. It's not like he's performing brain surgery....  he's a Protein Display Artist (meat stocker)... but I love his determination to not miss work. (He didn't get that from me!)

Mom came home from the hospital on Sunday. She's doing quite well considering she was sliced from stem to stern. She, of course, can't lift anything but she's getting around pretty well. Better than me, actually. I don't think we have any additional information on the pathology from the surgery yet but we definitely feel like the cloud has been lifted.

For me, once they were home and could care for Oscar my life got way easier. Essentially I was taking care of an animal that usually has two people caring for him in addition to caring for my cats, one of whom is quite territorial and high maintenance. Oscar must be right beside you ALL the time and didn't like my cat coming around. That was stressful and I felt bad for my Little Kitty. He's been extra needy this week to make up for it.

I had a few additional chores such as getting Austin to work and keeping the water out of the basement. I've been doing the litter box which, can be hard for me but is not as painful as climbing the stairs to take Austin to work or carrying the heavy water tank from the carpet shampooer to dump. The day of mom's surgery it rained and I had to make a bunch of trips to dump the water out of the carpet shampooer and that continued for most of the time she was gone. Usually she deals with the water, or Pop does, or I do in between when they do but I had never had complete responsibility for keeping things dry. That set me up for a few days of being uncomfortable in itself. 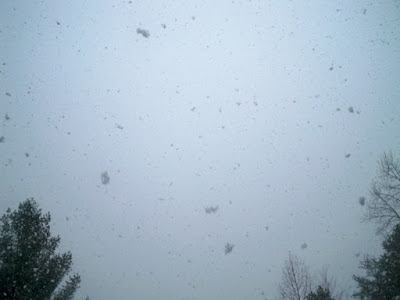 Pop usually cooks so while they were gone we did things like order pizza, eat leftover pizza, and such. I keep a stock of frozen/ shelf stable stuff down here that I can fix for myself as needed. Tasha kept the floors swept and vacuumed which was a huge help. She also had kitchen duty, keeping the dishwasher cycle going and made sure I had clean dishes down here (which is huge for me, not having to climb the stairs to get dishes). Austin worked his tail off making sure everything was "Mawmaw ready" before she came home from the hospital. He even cleaned out the fireplace and laid wood in for them to have a fire as soon as they got home. He's a good egg, that one.

In summary, we are glad that everyone is back home and life is slowly returning to normal.

Now we just have to hope that the weather is beautiful without being an inconvenience, that Austin gets home safely and back to work safely and that we don't lose power. Our heat and hot water and cooking is propane, I think. Not sure about the heat but hot water and cooking is propane for sure. And we have a fireplace but it only heats the main floor. I'm used to it been cool in my Whine Cellar. I was gifted (picked out for myself) a big, huge, oversized hooded robe that is so big it doubles across me and goes down to my toes. I call it my "sleeping robe". Oscar slept INSIDE it while my parents were gone. Little Kitty likes sleeping inside of it as well. On the really cold nights I sleep in a hoodie, the sleeping robe and cover up with another blanket. I'm sort of like Randy from A Christmas Story but it's super cozy.

So I guess that's life here at Patton Lake in January. Can't wait for the big renovation to start so we can keep the basement dry but in the meantime I'm ok. Everyone present and accounted for... limping along as best we can!

It's hard to believe that one month of 2016 is almost history.
It sounds like your mom is doing better than one would expect
after the extensive surgery. I hope her recovery is continuing
on a positive note.
I hope you are managing to relax and lay low and recoup.
It only takes one simple silly thing to throw the body out of whack.
but it seem to take forever to get back in the groove.
I hope you are staying warm and dry.
Monica :)