And then another week went by.

What can I tell you? It's been a rough week pain wise and I just haven't had much to share. Yesterday was the first time I had climbed stairs in quite awhile. I had put myself on restriction from picking up Cosette to try to get my pain under control. I would hold her in my lap (which actually put a lot of stress on my shoulders because she is so curious and wiggly so... six of one, half a dozen of the other) but I tried to not stand up while holding her. I tossed that out of the window yesterday and had a great time with her but I can feel it today!

I can now tell you what my nieces big Christmas gift was... they went on a cruise with their parents! They got home Monday and went back to school yesterday and there were some tired Gant girls hanging out with me yesterday afternoon! Pop fixed dinner for all of us so we had lots of time to catch up. Cosette is crazy about her big cousins! She leans her head toward them - her way of hugging - and kept giving them big old open mouth kisses and saying, "ooooohhhhh" like you would when you see something sweet. Cosy is so loving and nurturing.

Austin and Tasha got engaged on Christmas Day. There isn't a date set but it was a way of them sealing their commitment to each other and Cosette. Austin has been so consistent with his devotion to his little family and is such an integral part of our extended family. His day off yesterday was spent cleaning out the gutters (which we hope will help with the water that gets into the basement). There are times I feel like he doesn't get the credit he deserves and yesterday I apologized for not giving him a more stable nuclear family to grow up in. He said I gave him so much in the way of "bonus family" that it doesn't matter. I agree. Family is what you make of it and God has a beautiful way of filling in the blanks for us. 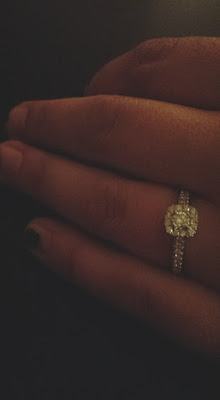 Then, much to my surprise, Ryan and Sara got engaged on New Year's Eve! I don't know if they have a date set for them either but I am so excited for them! It feels like Sara is already a part of the family. She is a beautiful, caring person and she has been so good to Ryan. They have been together for 4 years, I think? I'm just so happy to have my kids all have someone in their life who gives brings them happiness. It's always been my goal for my kids that they be happy and loved and I feel like they all are.

The update on my mom is that there is no update. She meets with the surgeon on Friday and hopefully we'll finally get a time frame for everything. Can you imagine living in limbo for two months, knowing you have a tumor that has to come out and not being able to speed up the process of getting it out? We have all sort of put things on hold waiting to see what our January and February are going to look like. And it's just time to get answers. I trust so strongly in God's timing in life because He has proved himself time and time again but we are ready to see Mom past this.

I've also had things on hold due to not feeling like doing anything. My sister-in-law's baby shower is this month and as much as I would LOVE a little trip to New York I can't imagine having two or three days in a row that I would be up to traveling, especially with unpredictable weather delays. I even flirted with the idea of seeing Les Miserables while Alfie Boe is still playing Jean Valjean but it turns out that he's not in the show the weekend of the shower. That had virtually nothing to do with my decision, honestly but it is fun to plan and dream from time to time.

I'm sort of on reserve for dog duty - and when I think of dog "duty" I always hear it in my head like "doody" because it inevitably plays a factor. Oscar has gotten really good at sleeping with me and is quite content. Little Kitty gets angry but... what can you do? Once we finish the waterproofing of the basement I plan to splurge on a bigger recliner where maybe two animals can sleep with me, if their temperaments allow. It's gotten easier to add dog watching to my normal cat lady routine and it gives me a way to contribute to mom's recovery. It doesn't come naturally for me but if Oscar loves you, he REALLY loves you so that's rewarding in itself.

Meanwhile, I've been entertaining myself during this current confinement with binge watching Call The Midwife. I love it so much and am on the last season on Netflix and dread finishing it! I've also been learning Italian with an app called "Duolingo". It's free and easy to use and I am currently 2% proficient in Italian. Basically I can ask for a drink of water but it's a good way to keep my mind in gear. I'm also binge reading a blog written by one of the people whose vlogs I watch. Vlogs are video blogs. I have about a dozen that I watch daily on YouTube. They usually are about ten to fifteen minutes long. I could see myself vlogging if it didn't mean having to put on makeup every day - which I don't. And of course I'm sewing for a couple hours a day and working on Ancestry.com and honestly never ever feel the slightest bit of boredom.

But I bet you're beginning to feel some boredom so I'll end here! I'll update if there's anything to share. Hope you're off to a great New Year! Love and hugs!