Today I straightened my hair. Haven't done that the past few washes. Which is like... weeks... because I only wash my hair once a week. You may think it sounds gross but it really isn't because I'm like... indoors 99% of the time. It keeps my hair healthier. This was totally NOT the point of this blog. I did my hair, I put on makeup, I naired my legs and I wore a dress to go to the prom my post-surgical re-check at the GYN doctor. Living la vida loca, y'all! I did at least get a "you look fabulous" out of the doctor but, honestly, compared to seeing me naked, unconscious and upside down anything would look better, wouldn't it? Sorry for creating that mental image. Really sorry.

Austin was off today for the first time since Tasha and Cosette moved out. We knew I was going to be at the doctor so he didn't plan to see the baby. Things are just really, increasingly unpleasant and it's quite stressful. Not my story. Not my story. Not my story. Trying not to blog things about it. Tasha and Cosette did come over yesterday and hung out for an hour or so which was nice because Sarabeth and Jamie spent the day with me. Cosette loves her "big cousins" quite a lot so she enjoyed seeing them. Austin was at work so he missed out.

Again, not my story, but most people get it... if you're not getting along well enough to live in the same house, you're not going to get along well enough to have casual conversation... or even meaningful conversation about your child because your own personal stuff can't help but get in the way, whether it be hurt or frustration or anger or misunderstanding or whatever happens to be the case. Not saying any of that is the case here, necessarily. Just that it's awkward. Everything that is an issue gets magnified when you take away the cushion of "I love this person and don't want to fight with them". The stakes are higher. The stress level is higher. Especially for the mom who loves her son and understands him... and loves her granddaughter and wants to keep the line of communication and visitation open with her. Stressful.

My doctor visit was mostly ok. One incision out of the three isn't healing well but the part that isn't healing is the top, outer level, which is better than it being all the way through. There was a lot of pushing and pulling involved in determining how it was healing so that was rather unpleasant. It was hot outside. The doctor said I shouldn't be holding babies yet ...oops! And he said to give it another two weeks before trying the baby holding thing. He said that after major surgery, with all the extra energy your body uses to heal, you can expect to be randomly tired for up to several months. I didn't mention that I've been randomly tired for the past five years all of my adult life. At least for now I can blame it on the surgery. 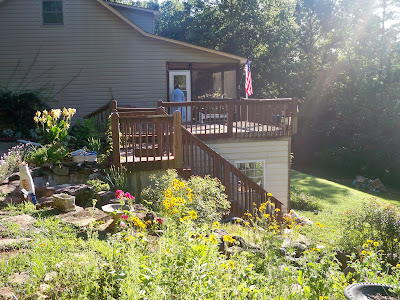 We're having one of the upstairs decks rebuilt into a nice screened porch. The work for that started today. I've taken lots of before pictures but I'm only posting one for now. 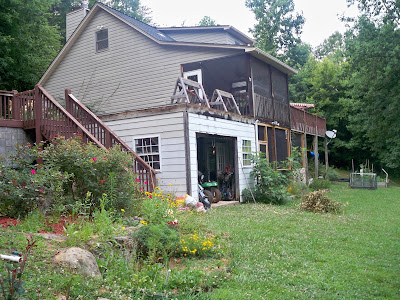 After one day of work. It looks like all they've done is take off the rails but they actually took off all the boards down to the shed. 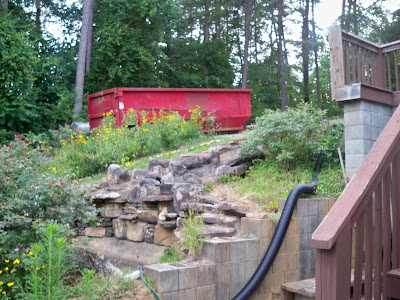 I'm particularly fond of the big red dumpster they're using for the project. Isn't it lovely? As if our driveway wasn't hard enough to back up in.
Today for dinner we had Captain D's. Fish burps. Ugh. 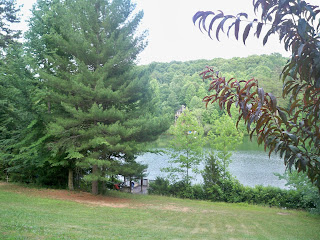 Summer is a good time for this sort of project because the trees around our property kind of make us isolated. For instance... I had to go way to the corner of the yard to catch our neighbors across the lake. Can you see the house across the lake? Right there in the middle. They are part-timers. They live in Florida and are only here occasionally and briefly. When they're here they're noisy and obnoxious and get out on the dock at night. Otherwise, they're good neighbors. When they're gone.
Austin came home with a new tattoo. It's a heart with "Cozy" in the middle. Austin and Tasha abbreviate Cosette as "Cozy" not "Cosy" like I do. Whatever. Still pretty darn sweet of him to get a tattoo with his daughter's name. He loves her very much and misses her terribly. He just couldn't handle the constant conflict between him and Tasha. And honestly, it was really hard on my parents hearing a lot of fighting going on because Gant's tend to be non-confrontational and don't raise voices except to sing or laugh or when my dad sneezes and scares the cat who, when startled, sinks his claws into my belly, which is already tender and THEN I yell. But not loudly. A few times I made the mistake of getting in the middle of things with Austin and Tasha and I finally had to stop. If Cosette can't grow up in a house with both of her parents, then I at least want her to grow up having peace in her life. She is loved, so deeply loved. We just have to make sure she always knows that.

Ok. That's it for tonight. Love and hugs!

yes, babies learn everything from their parents. I can NOT stand when parents fight in front of kids. IT is a pet peeve of mine. We are not perfect but we as parents created such beautiful little creatures and they do not deserve to hear bullshi$.
I will never understand that sort of nonsense.
My own son can be a pain in the butt. I tell him so. No, they do not live with us. They are NOT married and that is ok with me because I do believe with all my heart they do not belong together at all. They made me two of the most gorgeous grand babies , but they yell and scream and most times not happy. And my beautiful granddaughter who is not even 2 til August is picking up on this. WTH..?
So maybe they made the right decision for that gorgeous baby girl. As long as you have your grandparent rights and great grandparent rights you'll all be ok!