Good news! I survived! My surgery on May 25th  - two weeks ago tomorrow - was a whopping success. I mean, I guess it was a success in that I left there uterus-less and did not die from being held upside down. There were some dramatic moments such as a "must empty bladder to leave hospital" decree that had me arguing with nurses for four hours over 100ccs of urine. I won the draw when I said, "do you have one of those scanners that can tell if my bladder is empty? Go get it.". Once they realized that 100ccs was indeed, all of the urine my bladder had contained after drinking two liters of water (this is not my typical exaggeration) they agreed to release me. I had one nurse who was so precious to me that she returned on day two of my stay despite passing kidney stones... and one who was so evil that I called her "evil" when I filed a complaint, less than a half hour after coming out of anesthesia. Even when I'm down and out, I'm still sharper than most. Her mistake was to bypass giving me the ordered post-operative medications because - in her words - I am a "chronic pain patient and nothing will touch her pain anyways". I was awake. And heard. And demanded to be treated appropriately (I was, with morphine and yes, it did work) and asked for her supervisor.... who held my hands in hers and explained that I had "such very low blood pressure" that they were waiting as long as they could to give me pain medicine. Whatevs. So... yes. That was two weeks ago. And I am (as of today) driving and mostly back to normal. There's one little spot that isn't healing as pretty as I would like but... it's not like I'm going to ever wear a bikini again (you're welcome) so... it's ok. That being held upside down thing - they really do hang you by your legs in stirrups with your head at about 45 degrees lower than your body. Something about gravity moving the other organs out of the way. It was my greatest fear, even greater than fearing pain. I mean, because there is more of a gravitational pull on me, if you get what I mean... My anesthesiologist promised that he would keep me alive and he did so... there's that. 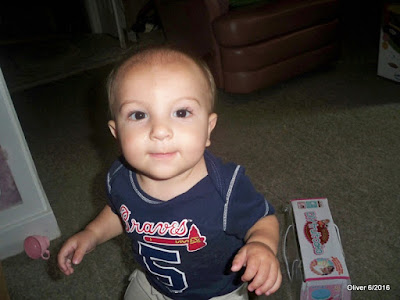 I've had LOTS of time to keep up on current events and we're in a sorry state of things, for sure. I've had lots of pain meds but not so many that it blurred my eyes to the daunting reality of a President Clinton or President Trump. I've never been a Trump fan but I've said that I would never ever ever vote for a Clinton. Or a Democrat. But especially a Clinton. Then Trump had to get out there and malign that judge with his Mexican heritage. The thing is... this little boy who holds a huge chunk of my heart in his beautiful chunky tan fingers is also of Mexican heritage... proud, legal, strong, responsible, good, GOOD heritage... the hard working, tax paying, college educating, loving my son like he was one of them Mexicans... the Mexicans who were here before we were kind of heritage... would a President Trump think less of my sweet Oliver because of this? There are two things you don't mess with... my money and my children... which now extends even greater to my grandchildren... and anyone who would think less of Oliver could never get my vote. I told Austin this morning that I would vote for Ugly Baby before I would vote for Clinton but... aaarrrrgh Donald Trump! Your big stupid mouth! 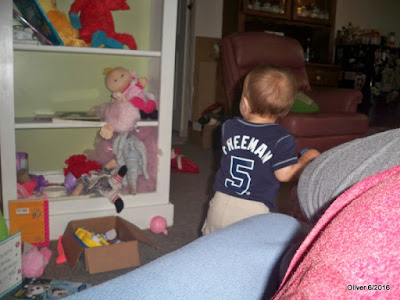 Ugly Baby is a doll that my aunt Ginger sent up for Cosette, out of her large... LARGE doll collection. It's a really ugly doll who makes a odd squeak when you move her arm. She kind of scared Cosy at first but I told her that even ugly babies need love so she is now in the growing line of dolls that Cosette must cuddle and then pass around for mommy, Mawmaw and Nana to also hug when Cosy's playing down in Nana's "house". I got such a laugh watching Ollie play with Cosy's toys last weekend. Cosette was on a church picnic with her mom so the babies didn't get to play together but Ollie played with Cosy's toys. Where Cosy would have "given a love" to the babies, Ollie dragged them around by their hair or the hem of their clothes. Where she would never go to the side of the hearth where there is no padding because the stuffed gorilla is there... Ollie had no fear. Ollie loved playing ball and blowing bubbles and playing her leapfrog bus. It was surreal to have a different child with the same toys. The babies will not likely be together again until Oliver's birthday in July.  It will be a logistical curiosity getting all of us down there and back but we'll figure it out. In the meantime, a little Ollie fix did me worlds of good. Cosy's mommy has been good to not tempt me to hold Cosy while I wasn't well enough to and they have spent a good bit of time with her parents lately. I want more baby time than is good for me right now but they are both just the most beautiful, entertaining, smart, funny... I mean, they're my grandbabies, obviously I think they're perfect!

Anyways... I hadn't said much for awhile here. I've been sort of introspective and not out of sorts but definitely not myself. I saw the pain doctor yesterday and he thinks I'm doing fabulously and gave me lots more meds which I hope I never need but I'm glad to have them available if I did. I'm not at full steam yet but I'm feeling better than I've felt in a long time. When I feel good, I have a lot to say so... there you go. I'm still working hard on learning Italian - I didn't take a break from it at all. I'm up to about a thousand words, which duolingo counts as 7% fluency. I don't know about all of that but I am learning. And I'm happy to know that the old grey matter still retains language. And perhaps will even allow me to articulate for you kind folks again here every now and then. I hope you're all well. Leave me a long comment telling me the most important thing that has happened to you in the past month and the thing you're most looking forward to this summer. Until next time... love and hugs, y'all!

On June 1 I had a biopsy with ultrasound of three "suspicious" places from my March mammogram. It wasn't as bad as I thought it would be, the waiting for the BENIGN result was worse! I am now sporting bruising so glorious that I look like "the greatest of all time" used me as a speed bag!

Glad to hear your procedure went well. Sorry you had an 'evil' nurse, that stinks, but I'm glad you reported her. Nurses and other staff should be very mindful of what they say within earshot of their patients, they never know who's conscious enough to hear them and comprehend what they're saying, especially so quickly after coming out of anesthesia! (lucky you on that front - I wasn't able to stay awake more than a few minutes at a time the entire day of my surgery, and remember very little of what happened the whole rest of the day, but I was bright eyed and bushy tailed the next morning after breakfast)