Reasons to Love Monday - I'm not a hot mess any more!

Whitney Houston is dead and I don't feel so well myself.
Obviously, we have another celebrity who has succumbed to the abuse of pharmaceuticals.
I think xanax is the devil. It's too easy to take too many and then you convince yourself that you need that many to function.
When truly... they just lead you down the path of dysfunction. 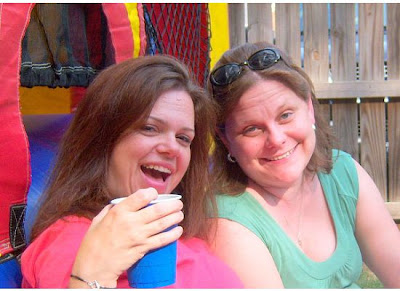 In this picture... I had a horrible fight with Michael. I have no idea what it was about. He wasn't even living with us at this point, he had already gone to Jacksonville to work and the kids and I were living in Woodstock. He would come home every other weekend and I would have a housekeeper come in the day before he came home to make sure that there was nothing that he was going to get upset about with my housekeeping. Anyways... there was something else I did wrong... it ended up with hours of him  "coaching" me... I took a handful of xanax at some point during the argument to slow my racing heart and numb the effects of his abuse...and then he insisted that we go to little Zoey's birthday party as we had planned. He didn't want me to tell my friend the truth about what my day had been like. So this is me and Amy... who is one of my soul mates, a sister friend who understood me from day one... this is me faking it... although the truth is... I was a hot mess.

The last pictures of Whitney... I mean no disrespect... but it was obvious she was a hot mess.  She was definitely numbing the pain. I mean... girlfriend walked out of a night club at two am with blood dripping down her leg... her spanx had quite clearly given up because she had a paunch that comes from years of drinking... hair all sweaty... sweat on her upper lip. Some times it takes a hot mess to know one.

When I left Jacksonville, I gave Jim the xanax to keep for me. Our agreement was that whenever I needed one, I would just need to explain to him why I needed it. I never have... not once... since I've been here. Oh, there's been times of great anxiety in my life - raising a teenager - car repossessed - house struck by lightning - a half dozen chronic conditions that make life difficult. I've leaned heavily on prayer, there's no doubt. There are times that I've had anxiety but not once since I left Jacksonville have I felt the kind of fear and anxiety that being with Michael caused.

These folks who are dependent on xanax or other similar medications need to figure out what the situation or circumstances are that are making them feel that way. There is a better way. That is not to say that people who have legitimate medical conditions that require treatment should avoid treatment. They should, however, be careful to take medications as prescribed. When you take meds the right way, the way they are prescribed, and observe the cautions on those medications (like... don't take with alcohol)... you don't end up drowning in a bathtub. That's all I'm saying.

Despite the pain with my back I have been extremely cautious about the medications I take for it. I have refused any narcotic medications although, truly, there are meds out there that would numb me and during the times that I don't have to function (drive, work, etc) I could take them. But I won't. I take a medication that changes the way my brain receives pain messages and I take a muscle relaxer at night. I take blood pressure medication (obviously not enough) and I take a vitamin D supplement. None of those are medications you could OD on.

I know that I am always going to be one bad day away from a hot mess. I just have to make sure my relationship with God is strong enough that I know... that I always remember... that He is all I need.

And now it's Monday... if there was ever a day that could lead to being a hot mess, it would be Monday! Yet....there are a few reasons to love Monday...
1. I'm no longer a hot mess.
2. Prayer is more powerful than xanax.
3. God preserved my life during the time that I wasn't doing a good job of preserving it myself. He sustained me.
4. I have a brand new pair of brown tights. I've been looking for brown tights for a year. I wear tights during the winter because they're warmer and hold up better. The pair of tights I've had has been with me for several years. Ive actually sewn up holes in them! It was time for a new pair.
5. I bought groceries yesterday so there is no menu panic for us before or after the work day.
5a I'm working hard on the coupon thing. Y'all send me your coupons if you're not using them! Pass along any tips you have! We have to make up the difference for a $400 a month decrease in income when child support stops... at least until summer when Austin can legitimately start working. This is about three points in one so consider this extra credit!
6. I'm feeling better. I'm still a bit of a snot factory but not as bad as I was. It's hard to draw a deep breath but I'm better.
7. My blood pressure was scary high last night - 159/114 - I think that's the highest bottom number I've ever had. This morning it's 129/84. MUCH better.
8. I had a great night's sleep.
9. It's cold outside but not as cold as it was overnight Saturday night.
10. Until time to get ready for work, I'm cozy in my fuzzy grinch pj pants and two pair of fuzzy socks. It's been a long warm and cozy weekend and I needed it.
11. I have another two and a half hours before I have to leave for work.
12. My cough is better. I was a bit anxious that it would turn into pneumonia... any snot in my body loves to head straight for those growths in my left lung. This time, I think we were spared. The mucus isn't moving in.
13. Trouble the cat is an amazingly accurate alarm clock. He wakes me up EXACTLY at 4:17 am every day. He goes to the window to watch for me every day at 5:48pm... even if I'm already here... he goes to the window, sees my car, looks around to see me... and then retreats from his post.
14. This is the day that the Lord has made, I will rejoice and be glad in it... Monday gives me a fresh slate, a renewed strength... reasons to keep on keeping on!

This is the passage of the day from www.biblegateway.com  -

The Message (MSG)
16-18"This is how much God loved the world: He gave his Son, his one and only Son. And this is why: so that no one need be destroyed; by believing in him, anyone can have a whole and lasting life. God didn't go to all the trouble of sending his Son merely to point an accusing finger, telling the world how bad it was. He came to help, to put the world right again. Anyone who trusts in him is acquitted; anyone who refuses to trust him has long since been under the death sentence without knowing it. And why? Because of that person's failure to believe in the one-of-a-kind Son of God when introduced to him.

Being in a disfunctional relationship is not pleasant to put it mildly. My ex was the kind who would just not talk to me, spend hours on the computer and then drink at night when he got home from work. I would find myself getting more and more angry and bottling it up until I finally exploded and started a fight with him. He would sit there with this look of superiority on his face and call me crazy etc.. blow it out your ass he would say and then I would leave the room and he would start breaking things or shout vulgarities at me. I would ask him about the broken things and he would say what are you talking about? You are crazy. By the time our relationship ended I was crazy, I was thinking of ways I could kill him and make it look like an accident. I knew I had to leave when he started abusing my kids. Men suck.. period!

Not all men... my daddy is awesome... and I've got some really outstanding brothers and remarkable sons... but it is very easy for the insane one in a toxic relationship to turn the tables on you and frame it so you look like the crazy one. *hugs*

Bless you, honey. I'm so happy to hear how much better you are; that you have a life now, and a future. I came from a horrific background and when I married, the first time it was like being a kid again. I was 37 when I met my Johnny and had children. He, second to the Lord, restored my sanity. Without the Lord I'd have still been in hell. With Him I am rich- have all I need. Your Monday is full of what I call "SHINY" moments. May you always have plenty of them.