What's Up Wednesday - While you were out.... 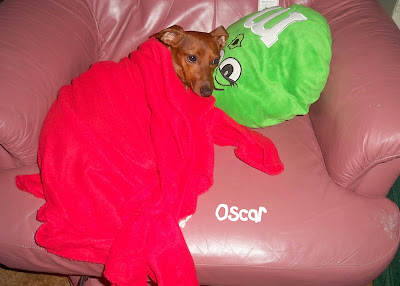 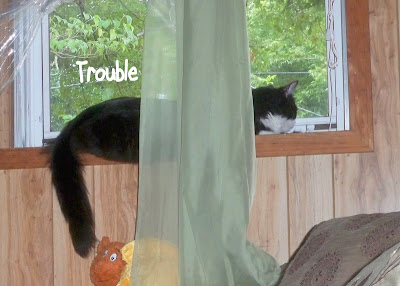 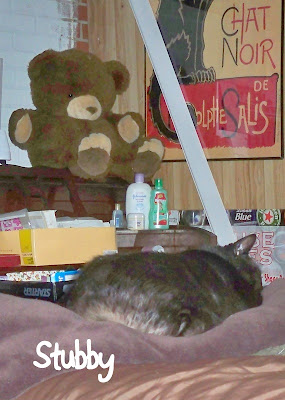 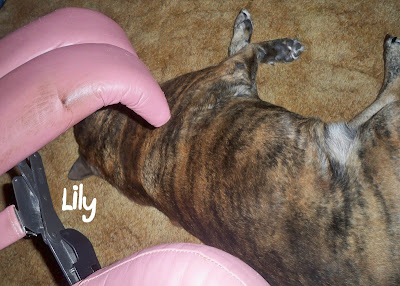 I glanced around my nest this morning and there were sleeping animals everywhere! Lady, who had a huge cyst removed from her leg yesterday, was at her usual post by the front door. Eddie, the old battle cat, was outside. Rosey, another old kitty was also outside. But everybody else was hanging out with me.

My kitties don't quite understand why all the other pets get to go outside and fortunately, they don't try to go out. Trouble watches out the back door... and he watches from my window, which is in the front of the house... and he watches over Cody and Marquee's house from Pop's window... but he hasn't tried to go out. Stubby never has cared much for going out.

I fought a headache all day yesterday and my back was killing me so I had an early bedtime and slept later than usual (until 7am). With Lady at the vet's, the other "goggies" were a little out of sorts and required a little more tlc than usual. Oscar is anxious whenever my mom is gone - and then for mom AND Lady to both be gone, he was bonkers! He was running a route between the front door and my nest... and every time he would come back to me he would settle right on my chest and I would have to lift him over and get him settled in beside me -not great for my back - but he couldn't help it, he was just freaked out.

Lily is a gentle giant. She was anxious, trying to find Lady, but she was quiet about it. Lily does have a little issue with Trouble... she'll leave Trouble alone 99% of the time but about once a day she will have a barking fit at him and it scares Trouble to death! Yesterday Trouble went end over end like a little cartoon fur ball and then hid under the bed for a few hours. Today when Lily "yelled" at him, he just came and sat beside me, so he's adjusting. Even with that... Lily endures a lot from Trouble... 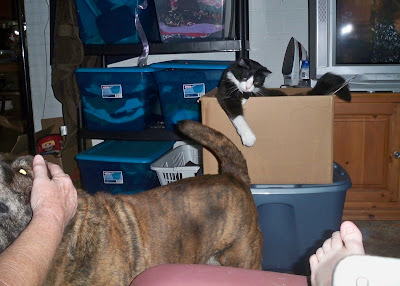 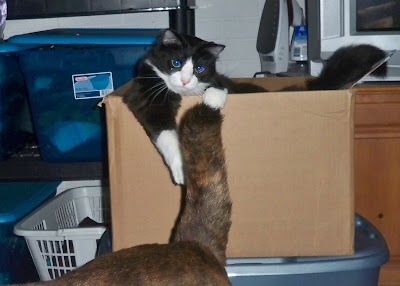 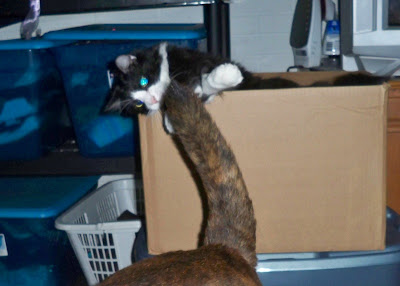 Lady is recovering well from her surgery. She came home last night wearing the cone of shame and kept bumping into things. Cody and I thought it was hilarious but mama and Marquee felt sorry for the old girl.  She's feeling much better, though, now that she has the cyst off. One of her stitches pulled open, probably from walking down the porch steps to go potty, but she seems happier.

At any rate, Vacation Bible School is taking a toll on me and mama... and I haven't even gone! Just doing the things that my mom normally does in the morning.... and for her, feeding about 80 kids a day, we're worn out. Pop has been off work all week so teaching Bible School in the morning is nothing compared to his usual schedule. He golfed yesterday afternoon and has gone to North Carolina this afternoon to tend to some of Grandma's affairs.

I made three trips back and forth to the college today... dropping Marquee off, picking Marquee up and going back to retrieve Marquee's phone... I went to the library and checked out a few books... and I went to the bank to see how I can keep DISH from docking my account for my disputed "early" termination of my contract. The bank suggested that I close my account. *eyeroll* I'm going to try negotiating with DISH again tomorrow.

I don't think things are going well for Austin. I mean, I think they are going about like I expected, in that he has run out of money, his dad won't give him any and I can't give him any. He hasn't found (or looked for, I suspect) a job. I suggested last weekend that he come down with me and we could get him something around here to do so that he would be in better financial shape to move in with his married friend or whoever in the future. He refused. He has resources there if he would take advantage of them but... the only shoes he has with him are flipflops. Nobody but nobody is going to hire a kid in flipflops. And he is living with people who are plain out poor. They can't afford to get him the basic things he needs to get established... and I can't send him money (because I don't have any) to help him get established... but even if I had it to give, I wouldn't trust him to do what he needs to do with it. He's just not there yet...and it's one of those things where I can't help someone who won't help themselves.

As far as my job perspective... I have heard zilch over the past week and a half. I knew there was going to be a delay, but I had at least hoped to hear a definite start date or something. I emailed the office manager and haven't heard back. I don't want to be a pest but... it's frustrating.