I've spent the weekend about a millennium back in time. I broke a tooth and it feels like it's trying to abcess, you know,  giving me a headache and an earache and aching into my sinuses and just draining my energy (even more than usual)... so I've stayed in the nest doing my genealogy and watching tv.

The thing is... I didn't have a formal history class in high school. Our gifted class took the slot where our history class would have been. We learned SOME history but it wasn't the same kind of memorization/test cycle of most history classes. And then... I didn't go to college. So when I embark on a certain branch of the family, I have to dig a little deeper to understand the background of that time period and I find myself googling things like, "The Mayflower" or "Middle Ages". I'm a wikipedia junkie.

Last night I figured out that *if my research is accurate* (and who knows if it is?) I'm a descendant of Lady Godiva. And then I realized that the only thing I knew about Lady Godiva was that the theme song for the tv show "Maude" started with a line that went, "Lady Godiva was a freedom fighter...". So I had to figure out WHO she was. Here's the lineage:

Below is copied from wikipedia...

Lady Godiva was the wife of Leofric, Earl of Mercia. They had one proved son Aelfgar, Earl of Mercia.[2]
Lady Godiva's name occurs in charters and the Domesday survey, though the spelling varies. The Old English name Godgifu or Godgyfu meant "gift of God"; Godiva was the Latinised version. Since the name was a popular one, there are contemporaries of the same name.[3][4]
If she were the same Godiva who appears in the history of Ely Abbey, the Liber Eliensis, written at the end of the 12th century, then she was a widow when Leofric married her. Both Leofric and Godiva were generous benefactors to religious houses. In 1043 Leofric founded and endowed a Benedictine monastery at Coventry[5] on the site of a nunnery destroyed by the Danes in 1016. Writing in the 12th century, Roger of Wendover credits Godiva as the persuasive force behind this act. In the 1050s, her name is coupled with that of her husband on a grant of land to the monastery of St Mary, Worcester and the endowment of the minster at Stow St Mary,Lincolnshire.[6][7][8] She and her husband are commemorated as benefactors of other monasteries at Leominster, Chester, Much Wenlock and Evesham.[9] She gave Coventry a number of works in precious metal made for the purpose by the famous goldsmith Mannig, and bequeathed a necklace valued at 100 marks of silver.[10] Another necklace went to Evesham, to be hung around the figure of the Virgin accompanying the life-size gold and silver rood she and her husband gave, and St Paul's Cathedral, London received a gold-fringed chasuble.[11] She and her husband were among the most munificent of the several large Anglo-Saxon donors of the last decades before the Conquest; the early Norman bishops made short work of their gifts, carrying them off to Normandy or melting them down for bullion.[12]
The manor of Woolhope in Herefordshire, along with four others, was given to the cathedral at Hereford before the Norman Conquest by the benefactresses Wulviva and Godiva – usually held to be this Godiva and her sister. The church there has a 20th-century stained glasswindow representing them.[13]
Her mark, di Ego Godiva Comitissa diu istud desideravi [I, The Countess Godiva, have desired this for a long time], appears on a charter purportedly given by Thorold of Bucknall to the Benedictine monastery of Spalding. However, this charter is considered spurious by many historians.[14] Even so it is possible that Thorold, who appears in the Domesday Book as sheriff of Lincolnshire, was her brother.
After Leofric's death in 1057, his widow lived on until sometime between the Norman Conquest of 1066 and 1086. She is mentioned in the Domesday survey as one of the few Anglo-Saxons and the only woman to remain a major landholder shortly after the conquest. By the time of this great survey in 1086, Godiva had died, but her former lands are listed, although now held by others.[15] Thus, Godiva apparently died between 1066 and 1086.[3]
The place where Godiva was buried has been a matter of debate. According to the Chronicon Abbatiae de Evesham, or Evesham Chronicle, she was buried at the Church of the Blessed Trinity at Evesham, which is no longer standing. According to the account in the Oxford Dictionary of National Biography, "There is no reason to doubt that she was buried with her husband at Coventry, despite the assertion of the Evesham chronicle that she lay in Holy Trinity, Evesham."[3]
Dugdale (1656) says that a window with representations of Leofric and Godiva was placed in Trinity Church, Coventry, about the time of Richard II.[16] 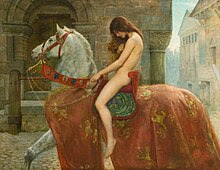 Lady Godiva by John Collier, c. 1897,Herbert Art Gallery and Museum
According to the popular story,[17][18] Lady Godiva took pity on the people of Coventry, who were suffering grievously under her husband's oppressive taxation. Lady Godiva appealed again and again to her husband, who obstinately refused to remit the tolls. At last, weary of her entreaties, he said he would grant her request if she would strip naked and ride through the streets of the town. Lady Godiva took him at his word and, after issuing a proclamation that all persons should stay indoors and shut their windows, she rode through the town, clothed only in her long hair. Just one person in the town, a tailor ever afterwards known as Peeping Tom, disobeyed her proclamation in one of the most famous instances of voyeurism.[19] In the story, Tom bores a hole in his shutters so that he might see Godiva pass, and is struck blind.[20] In the end, Godiva's husband keeps his word and abolishes the onerous taxes.
Some historians have discerned elements of Pagan fertility rituals in the Godiva story whereby a young "May Queen" was led to the sacred Cofa's tree perhaps to celebrate the renewal of spring[21] The oldest form of the legend has Godiva passing through Coventry market from one end to the other while the people were assembled, attended only by two knights.[22] This version is given in Flores Historiarum by Roger of Wendover (died 1236), a somewhat gullible collector of anecdotes, who quoted from unnamed earlier writers.

Lady Godiva: Edmund Blair Leightondepicts the moment of decision (1892)
At the time, it was customary for penitents to make a public procession in their shift, a sleeveless white garment similar to a slip today and one which was certainly considered "underwear". Thus, some scholars[who?]speculate, Godiva might have actually travelled through town as a penitent, in her shift. Godiva's story could have passed into folk history to be recorded in a romanticised version. Another theory has it that Lady Godiva's "nakedness" might refer to her riding through the streets stripped of her jewellery, the trademark of her upper class rank. However, both of these attempts to reconcile known facts with legend are weak; in the era of the earliest accounts, the word "naked" is only known to mean "without any clothing whatsoever".[23]
A modified version of the story was given by printer Richard Grafton, later elected MP for Coventry. According to his Chronicle of England(1569), "Leofricus" had already exempted the people of Coventry from "any maner of Tolle, Except onely of Horsse (sic.)"[citation needed], so that Godiva ("Godina" in text) had agreed to the naked ride just to win relief for this horse tax. And as a pre-condition, she required the officials of Coventry to forbid the populace "upon a great pain" from watching her, and to shut themselves in and shutter all windows on the day of her ride.[24] Grafton was an ardent Protestant and sanitized the earlier story.[21]
The ballad "Leoffricus" in the Percy Folio (ca. 1650)[25][26] conforms to Grafton's version, saying that Lady "Godiua" performed her ride to remove the customs paid on horses, and that the town's officers ordered the townsfolk to "shutt their dore, & clap their windowes downe," and remain indoors on the day of her ride[27][28]
I've been working on the same branch of the family all weekend. I'm not much of a "long-term project" kind of girl. I want to finish in a reasonable amount of time, i.e. before it loses my interest. Tracking your entire genealogy, even with the benefit of ancestry.com and the internet is a long, long, time intensive project. However, it's not like I'd be out feeding the homeless or running marathons if I *wasn't* doing the genealogy project. Hopefully, one day when my kids or nieces and nephews or grandkids or whomever gets interested, this will HOPEFULLY be a complete, completed record for them to access. And maybe by then there will be some other fantastic way to do this kind of research so they can just build on what I've already figured out.

As it turns out, we are cousins! Grandmother Lady Godiva. My maternal line through the family name of Green goes back to her as well. :)

She is my 32nd grandmother. Pretty cool