Yesterday was a good day for pushing through some of the heavy things that have been floating around our universe lately. The fact that heavy things seem to float should be an indication of how my mind works. At any rate...

I'm still grieving the plane that was shot down over Ukraine. Perfectly good plane... zapped. Perfectly innocent people... gone. And the utter disrespect toward the remains afterwards just hurt my heart. The fact that this may be just the beginning of much worse conflict between Russia and Ukraine worries me. Why can't folks just leave folks alone?

I lean toward being a Zionist, in that I am a believer that the Bible is the literal Word of God and I believe that we are told that the people of Israel are a chosen and special people to whom God himself has given the Holy Land. I know that most people in the Middle East disagree with this concept and are determined to eradicate the Jews from the face of the earth. Every time I heard/read something about how mean Israel was being by bombing hospitals and schools and whatnot in Gaza made me stabby. Has our world turned so much upside down that we expect a country to be bombed, to have their young people kidnapped on their city streets and to do nothing in retaliation? I could get really entrenched in a discourse on this but... Israelis vs. Hamas is a sad thing and I believe, something that will never end.

And the Christians in Iraq who are being slaughtered? My heart shatters! I'm such a lazy Christian and I see these people who are dying for their faith and I am just ashamed of me... of the world we live in ... in the way we have let the value of human life slip to nothing.

Then Robin Williams suicide hit the news Monday  and... I just know... I know that level of desperation. By the grace of God I've been blessed with almost six more years than what I was going to allow myself. And, no, these have not been easy years but they've been there for me to live. Being close to someone like Robin, my Purple Michael, who is talented and bright and beautiful and hilarious and magnetic and whom everyone wants to be around. Being around him makes you feel so good! But it doesn't always feel good to be him. I think for creative, talented people who have the ability to slip in and out of characters who make people laugh and cry and feel... I think for them the lows are so much lower and harder to recognize. We see him smile but that smile is a character, whether on stage or something he improvises as he goes. I've had Purple Michael (and others in his similar situation) reach out to me pleading for me to pray... to ask my Christian friends to pray... because sometimes the road is so dark. Early on in our friendship I realized that P. Michael had many more layers than what others see and I tried to embrace every one of them. I think that has always strengthened our bond. Back then I didn't really understand depression but now,  because I have walked in that darkness, I know what it means to not be able to find the light and to want to quit looking for it.

So... so... much sad. Plus the usual pain and uncertainty that color my life a little grayer than it would otherwise be. Yesterday was probably the least painful day I have had in a long while. This morning I'm having a good bit of pain but I'm still glad for the things I was able to do yesterday.

Austin stopped by yesterday with his girlfriend and his goofy friend. Remember the guy who wanted Austin to spend the night with him on his wedding night? And when I questioned him having company on his wedding night he said it wasn't a wedding because they got married at the courthouse? Yeah. That guy. He came over. He and Austin's girlfriend know each other from way back - I think their families are close. At any rate... they weren't here long but we did all have a friendly chat so that was nice. Austin's girlfriend is a bookworm as is Cody's wife (who has a degree in English). I'm not sure about Ryan's girlfriend Sara but Ryan's a big reader so I would bet Sara is too. I like that my "daughters" all like to read. I think reading opens up so many worlds and says a lot about your curiosity and ambition in life. I also want to think that my future grandchildren will be read to.

Yesterday my dad went to Walmart and bought a ton of craft stuff for my nieces. Jamie has been accumulating craft stuff from around the house to use when she's here. Pop got a big crate full of stickers and scrapbook paper and yarn and markers and glue sticks and ... tons of stuff. Can you imagine what the check out girl at Walmart thought with a man coming through with a big pink crate and all kinds of girly craft stuff? Mom had a doctor's appointment and Pop had to drive her so I picked the girls up from school.  I taught the girls how to make yarn dolls and Sarabeth made the characters for a Nativity scene to go in the Palm Tree Theatre (Jamie's box with curtains that she made out of an old shirt of mine). They used scrapbook paper for the backdrop. What I love is that if you give them some ideas and materials, their creativity is endless! Also, they both are so bright that if you show them something once they've pretty much got it.

The afterschool pickup situation is a little different this year since Sarabeth is in Middle School. There is a shuttle bus that brings kids from the Middle School to the Elementary School. Once I got Jamie from the front of the Elementary School we drove around to the back to the bus lanes to wait for the shuttle bus. I worried that the 20-30 minute wait would be boring for Jamie so I packed yarn to start making the yarn dolls and some snacks for her. She had so much to tell me about school that she didn't stop chatting for the whole half hour, not even to have a snack! And even when sister got in the car Jamie still had more to tell me. It was hilarious! I think that afternoon wait is going to be just what our little extrovert needs to unwind after being in school all day.

This morning I'm Oscar-sitting while my mom has a doctors appointment. She has another one this afternoon so I'll be Oscar-sitting again. Basically he just has to snuggle close to me with a blanket over him and he's fine. He thinks he'll die without body heat... must have a human with him all the time. Little Kitty likes to cuddle some of the time but usually he'll cuddle long enough to get brushed and get his ears scratched but when he wants to sleep he'll go get in his little box.

I got the camera working but since the dog is on top of me I can't get it without disturbing him so I'll show you what my finished project will look like... 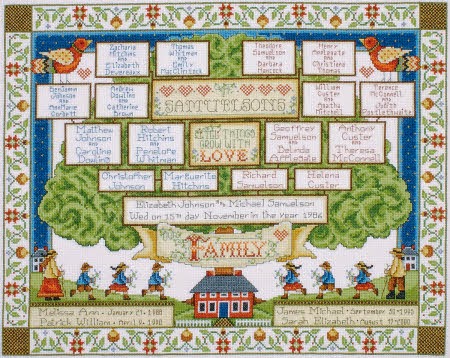 I'm really closed to being through.

Austin is fascinated with the progress I'm making on it. He has to show it to all of his friends when they come over. Who knew that my kid would be impressed with my mad embroidery skills?

Anyways. With so much wrong in this world, it's nice to have happy little interludes throughout the day with kids and dogs and crafts and so forth.

Hope your week is going well! Love and hugs, y'all!