Updates on Cosette and Other Things

I have the cutest little sample of a person for a granddaughter! She is six pounds of precious goodness and I can't get enough of her. Of course, my natural condition is hibernation and I try to give Austin and Tasha room to bond without a lot of interruptions. I mean, I don't call and ask how many wet diapers she had each day but if I'm taking her dad to work I might casually mention it. It really is insane how much love there is in the world for this child already and how many good wishes and congratulations we've received for her. But what you really want are pictures, especially for my non-facebook-readers so here are a few of my favorites: 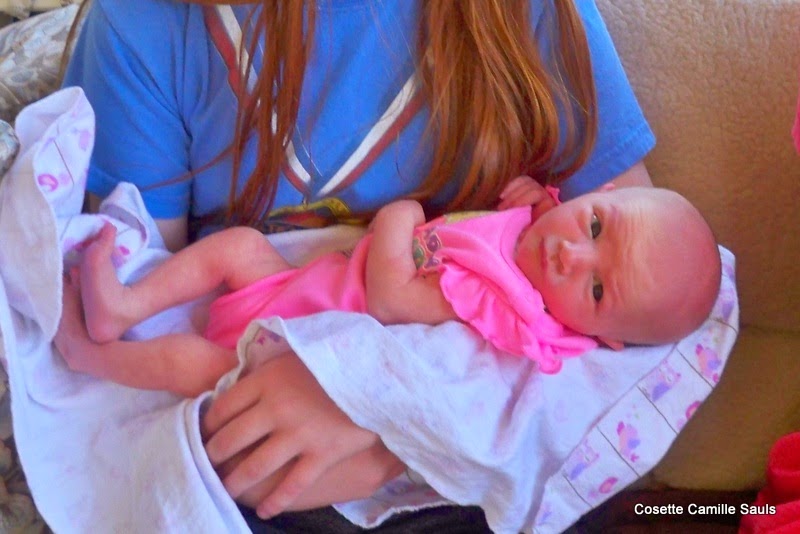 "Oh, hey Nana! What are you doing over there? Why aren't you holding me?" 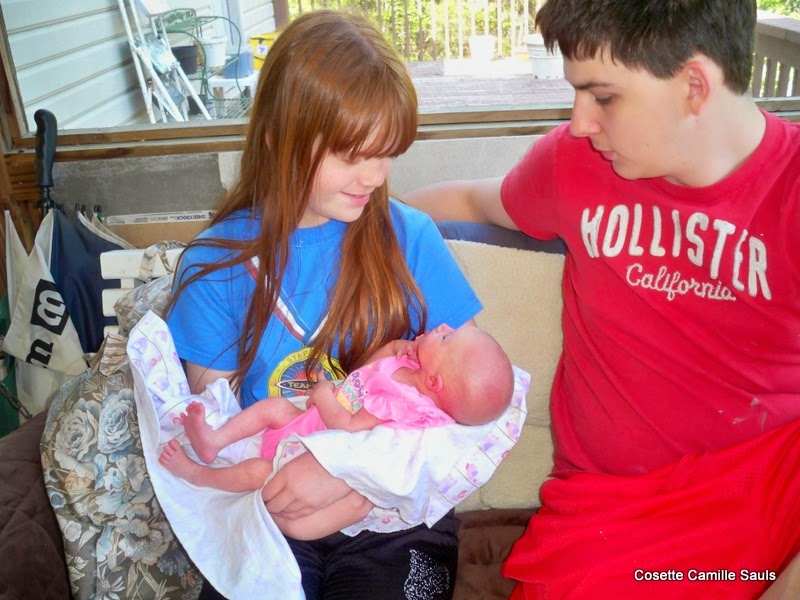 Cousin Jamie wanted a baby cousin SOOOO bad! I think she maybe enjoys cuddling Cosette more than any of us. It reminds me of a little girl at our church when Austin was born. Joy was ten and newborn Austin was her living baby doll. We spent a lot of time with her family between church services and church softball league and all the social activities that come with those things. Cody got very sick when Austin was about three weeks old. I stayed at the hospital with Cody and Joy's family were among those who helped out with baby Austin. Joy bonded very closely with him and would always strap on my baby carrier and tote him wherever she went. Since Austin was the third child it didn't phase me that he was roaming around with a ten year old. I had complete confidence that Joy loved that baby as much as her little heart would hold. She's now a mommy to, ironically, two little red haired girls and a little baby boy of her own. When I see how sweetly Jamie looks at Cosette I can't help but remember Joy cuddling Austin. And it all happened in a flash. 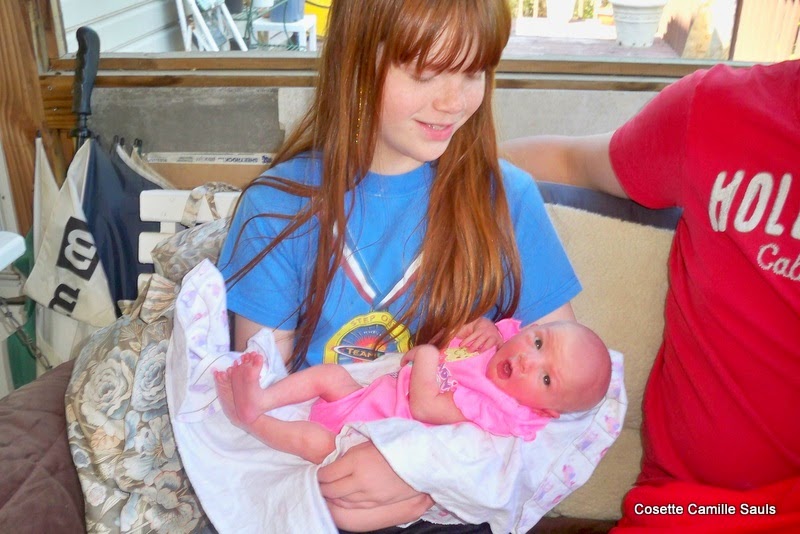 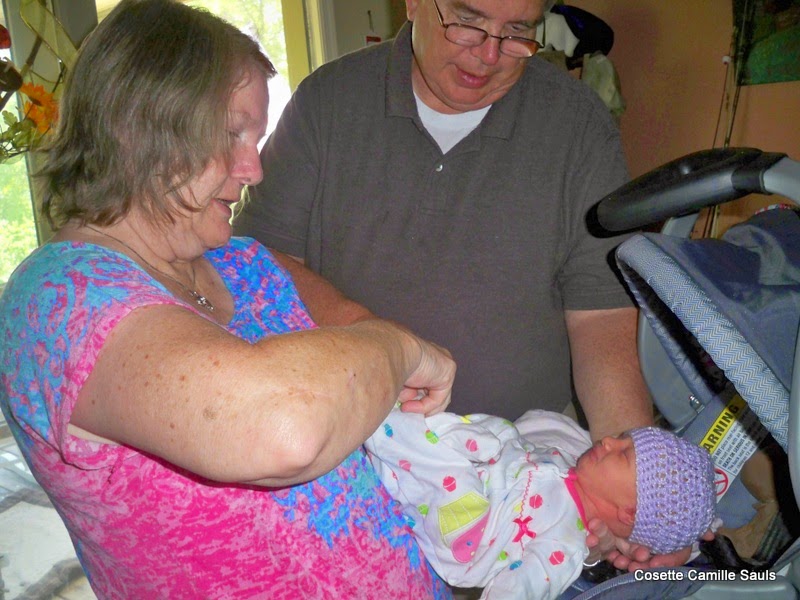 So... Cosette was born on Wednesday and then I went back to see her Thursday. Austin and Tasha came over on Sunday afternoon for Pop to meet Cosette and for Mawmaw and Nana to get to love on her (and for Austin to help out with some household chores). 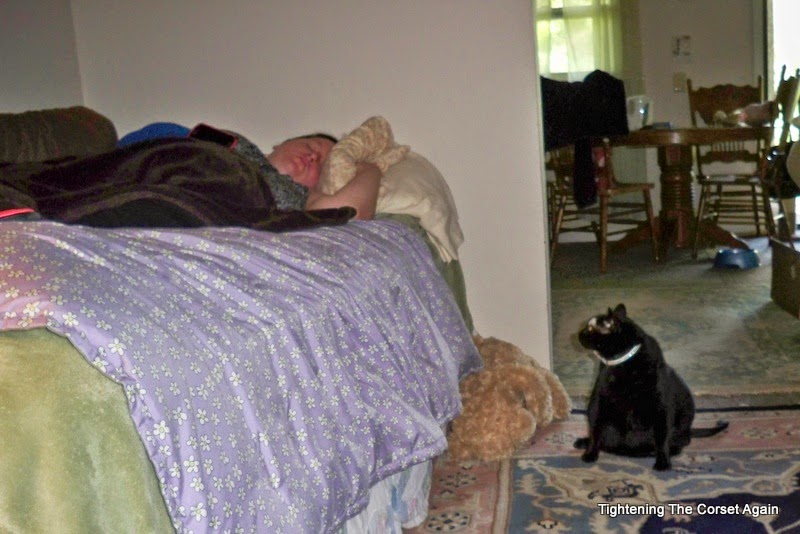 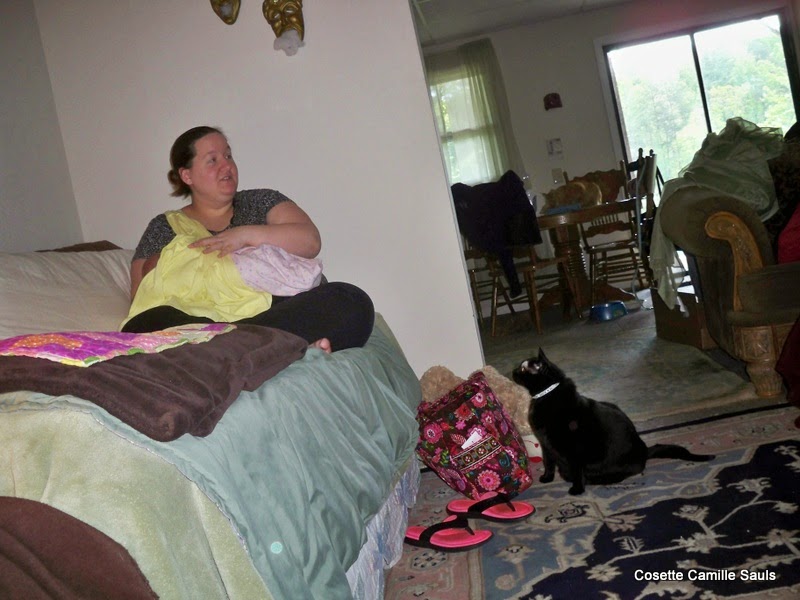 I took two photos exactly one week apart that involve Tasha and Stubby the Three Legged Wondercat. I thought these were both so indicative of what it's like to be a very pregnant mom and then a mom of a newborn. In the first picture Tasha is sound asleep and snoring loud enough to scare the cat. In the second picture the cat is trying to figure out what that "thing" is that Tasha's holding. I just love that he's in the same pose in both pics and that Tasha is enjoying the coziness of my princess day bed (which is also Sarabeth and Jamie's favorite snuggle place!) 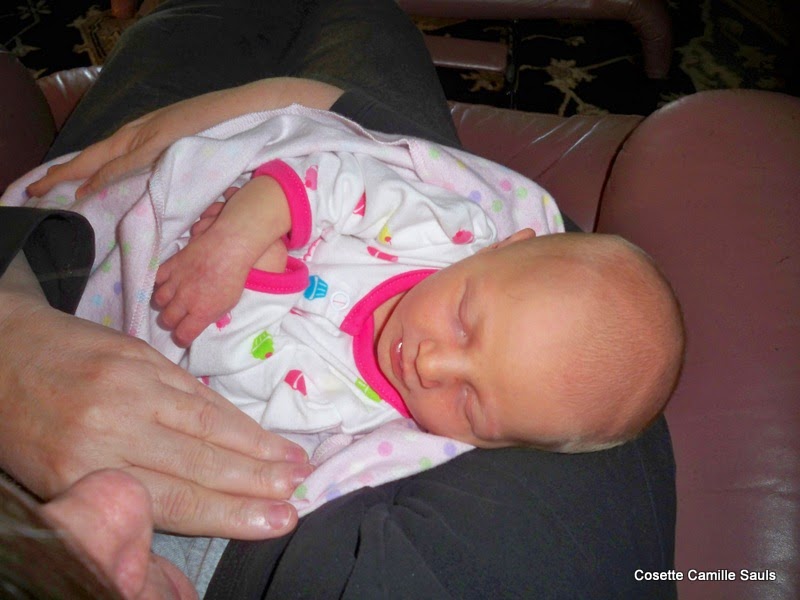 I casually posted a photo on my Facebook with a caption about how Tasha napped on Sunday afternoon and I got to hold Cosette the whole time. There was an underlying current of anger with Tasha's half sister that I was completely unaware of and she posted some really hostile stuff. It's weird because I really don't socialize much these days so I'm fairly well removed from dealing with people and drama and such but I think I handled it ok. She was flinging around accusations that Tasha's family had done everything for Cosette and ... yeah. Stuff like that. I got her to message me privately and gave her a line by line account of what "our family" had spent on Cosette and she backed off. It was kind of a shock to my system because I am so well insulated from drama down here in the Whine Cellar. I just don't have the capacity for stress on top of what I'm already handling from a pain management standpoint. Fortunately the dear girl lives in Arizona and hasn't been to Georgia in 17 years so its doubtful that she will continue to be a problem. 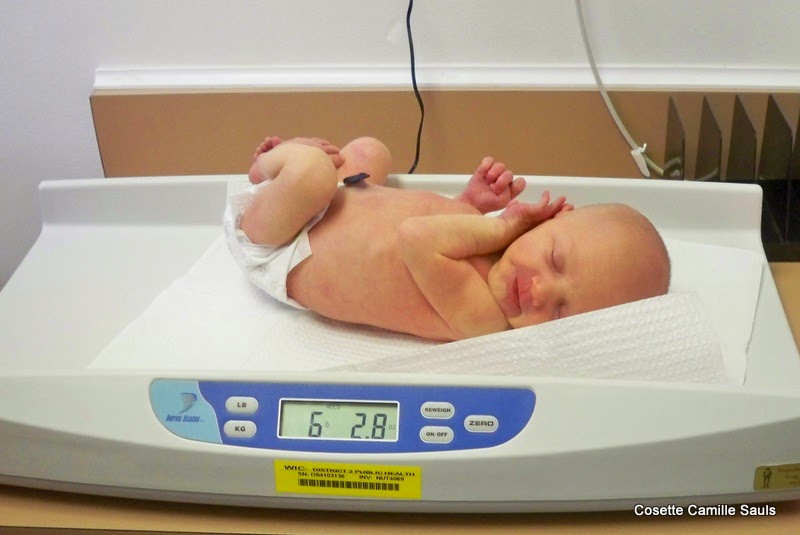 So... Sunday I had lots of quality cuddle time and then yesterday I took Cosette and her parents to the WIC office for their official check in or whatever it's called. Cosette had lost a few ounces off of her birth weight but the nurse said that she probably had some water weight at birth because Tasha had been pumped full of IV fluid. I'm not a big fan of the posed naked baby photos but if she's naked for a good reason such as to be weighed or to take a bath it's not quite as offensive to me. 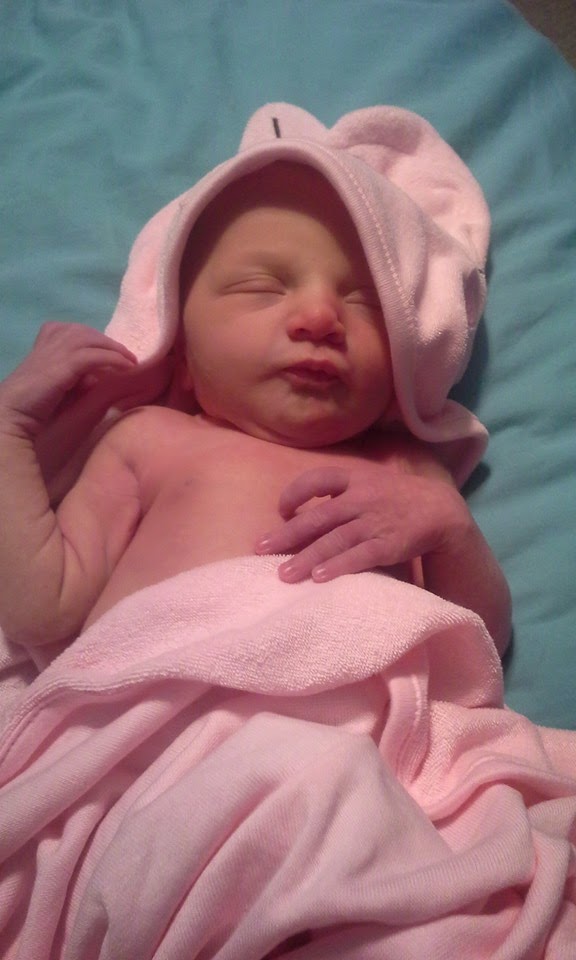 It was interesting to see how alert she was yesterday as opposed to the other times I've seen her. I simultaneously can't wait for her to grow and go through all the cute little stages of childhood and want to freeze time all at the same time. I just love her so much! 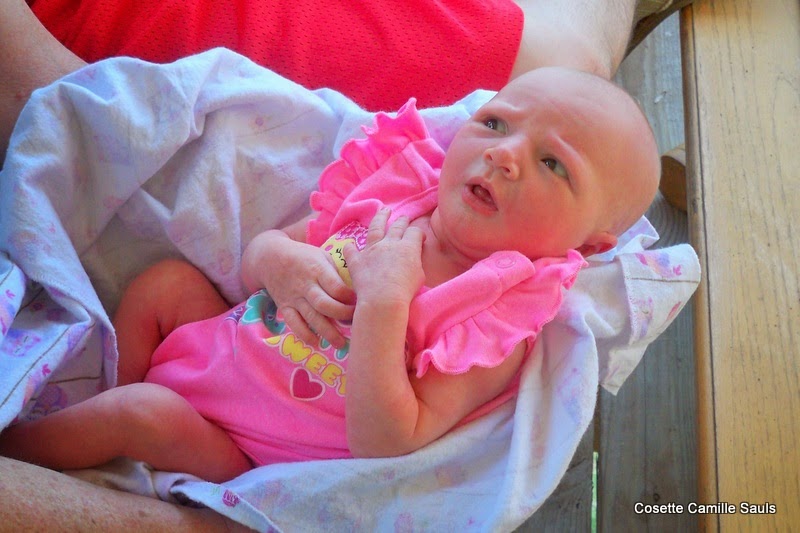 My cousin (second cousin, actually, which makes her Cosette's second cousin twice removed) reminded me to keep her swaddled because she looks cold in the photos from yesterday but I swear! She is so much like Austin in that she doesn't want her little feet or hands covered up! It was also pretty warm out on the porch, the warmest it can be without being uncomfortable so maybe 80 degrees or so. This also reminded me of a sweet old lady at our church who, every time she saw newborn Austin would scold me for not having socks on him. He wouldn't keep them on his feet then and he won't wear them now unless he has to. She would go to the clothes closet we kept with clothes to give to the poor people and would find him a pair of little socks to wear. Cosette has her daddy's feet... 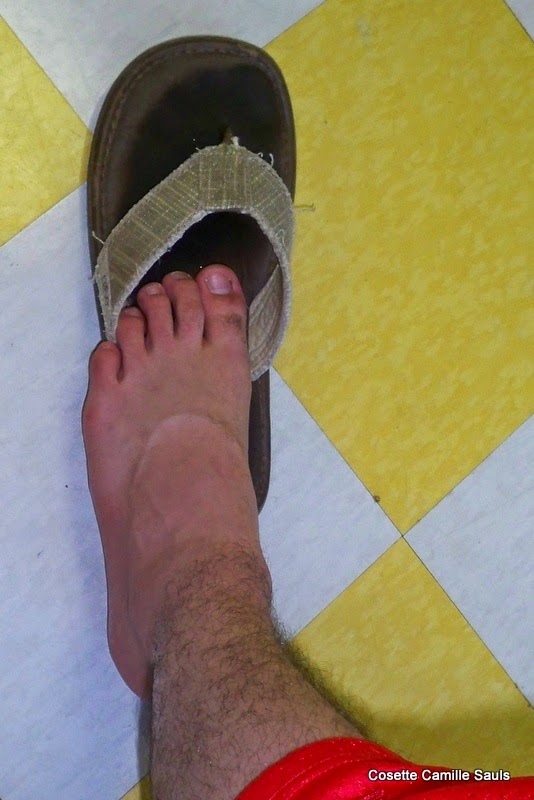 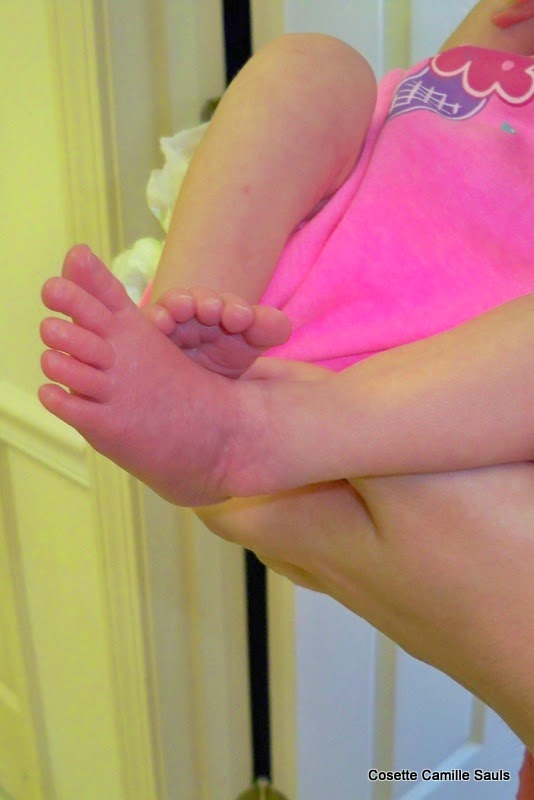 And her daddy's heart, so it would seem. 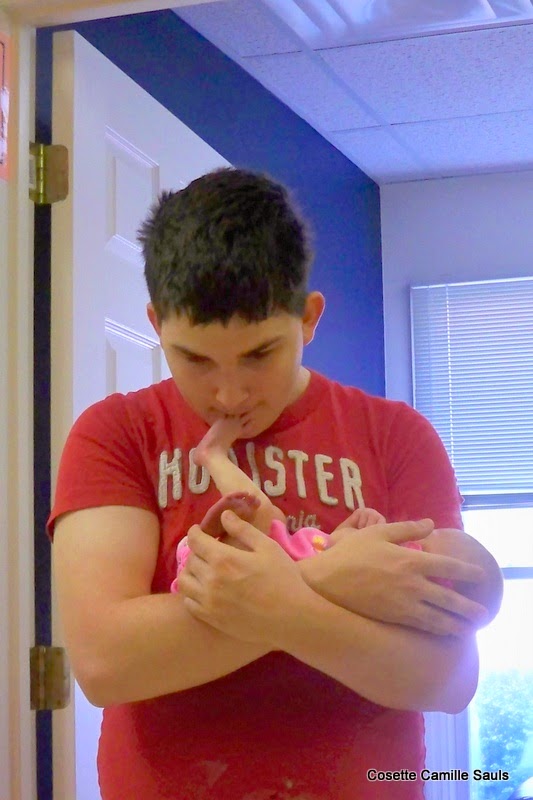 In other news... my mom, myself and my sister-in-law Angie will leave early Friday to catch a flight to New York. This will be a super short visit because Angie has a real job to return to and also wants to be with her mom on Mother's Day and because it's sort of a test drive to see how well I will handle travel so we intentionally kept it a short trip. We'll get to New York midday, have lunch with Helen (my future sister-in-law) and my brother and have a little down time (hot tub!) at Helen's family home in Pelham Manor, NY. (anybody live near there?) Friday evening we will attend Helen's bridal shower (the reason for the trip) and then Saturday we'll see Bryan's not-so-new apartment that none of us have been up there to see even though he's lived there for a few years already AND then have brunch and then catch a flight back to Atlanta. If all goes according to plan we'll be away from White County for about 36 hours so cross fingers that Pop doesn't forget to feed the cats while I'm gone!

It's been a flurry of activity (relatively so) to prepare for the trip and for the next trip up for the wedding. I was blessed with some Amazon gift cards for my birthday so I've been able to treat myself to new comfy (but not old lady looking) shoes, new sunglasses, a makeup kit and new makeup brushes (because honestly, I haven't worn makeup much in the past few years and when I've worn it I haven't worn much of it!) and a new swimsuit. I'm frankly developing an addiction to Amazon Prime. I'm either going to have to have another birthday or an intervention here soon.

Also, I don't have a good segue for this but apparently snakes have been sighted twice in the past few days on the property next to ours which makes me pretty skeeved out. Little Kitty has started his annual gifting of the half eaten lizards which is soooo not fun!

There's more to share but I'm eager to watch Jill Duggar's birth story on TLC that has just begun so I'll save some stuff for another day! Thanks again for all your well-wishes for our new addition! Love and hugs, y'all!