I woke up at 1am this morning with a migraine. Actually... I fell asleep while watching something on my laptop sometime after 8 last night and woke up at 10pm-ish. I got back to sleep again until just after midnight, woke up again and took a potty break, made sure the cats were set for the night and then went back to sleep. The next time I woke up was 1 am and that's when the headache started but it didn't turn to pure evil until around 5am. I tried doing my normal morning routine (fail). I tried going back to sleep but the cat kept doing a welfare check on me every time I would start to drift off. He knew I was slacking on my normal routine. OCD Cat strikes again. I started my Italian lesson but it was really hard reading with only one eye. The other eye was busy being drilled into by tiny evil hobbits who were building a fort in my brain. At least that's what it felt like. My stomach was empty or this would have been a vomitous migraine episode. The pain I can handle. The dizziness and nausea make life suck huge lemons. I went BACK to sleep around 7am and slept until almost nine, which is unheard of for me. Lots of accumulated sleep time... hardly any continuous, restorative sleep. My life. 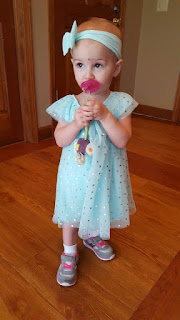 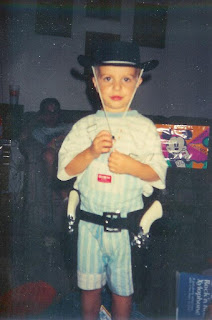 Cosy's mom sent me the picture of her on the left Sunday morning. Notable moment because she actually kept the bow on her head. She's learning to accessorize. Those big eyes plus pacifier remind me of her Uncle Cody. I tried to find a picture of Cody with his paci and I couldn't. He had huge Precious Moments eyes for the longest time. This was the closest I could find. This is from his third birthday. We had a Cowboys and Indians themed birthday party.

She also looks a lot like her dad. He didn't take a pacifier. Cody is the only one of my boys who did for any length of time. And Cody was every bit as much attached to his pacifier holder as she is. She rubs the silky tag on the paci holder whenever she's sleepy or upset. He had three paci strings because he had to have three pacis - one for his mouth and one for each hand. Here's a comparison of Cosette and her dad: 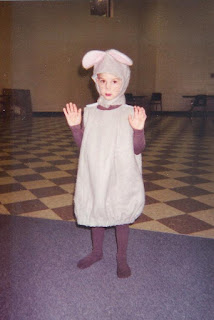 This was the Nutcracker in 1999, I think, which would have made Austin five in that picture. It might have even been 2000, which would make him six. He was an itty bitty boy. Austin and Cody were both tiny.

Austin and I  had some business to take care of this morning at the lawyer's office. I was going to put it off because ... headache... but after my extra sleep, I felt better. I thought... all we have to do is drop off some paperwork, let's go ahead and knock that out. We got there and it just happened that we were able to go through that list of questions with the lawyer and his assistant. It just worked out that we could get a lot MORE out of the way and since it was Austin's last day of vacation I thought... GET 'R' DUN... and so we did. So we saw it as far as we could which felt hugely productive, especially after my sleep-a-thon/lazy lie in.

Then I was like... what the heck... let's go ahead and make a Walmart run. I so deeply despise Walmart, not for Walmart itself but just the amount of walking involved, etc. I know, they have those little carts but the way you sit on those things is h-e-double hockey sticks on my back and hips. Walking is easier and it's not easy. Ultimately, though, more things off the "to do" list are "to done" so it was worth it.

With Austin on vacation from the grocery store, I was running out of groceries. Our meal arrangements are weird, I guess, but not weird for us because it's what works. I buy groceries, my parents buy groceries and Austin buys groceries. Pretty much I do my own breakfast and lunch, most of the time, and all of my snacks. Sometimes my parents will bring me down some grits and eggs or eggs and bacon, or whatever they've had for breakfast. Not everyday. I usually have yogurt and fruit or oatmeal or cereal or something like that for breakfast. Austin doesn't eat breakfast. For lunch... honestly... a lot of the time I don't think about it and when I do it's more like a snack than a meal. Austin eats lunch at work. My parents usually do leftovers or... just whatever is easy. For dinner we eat an "organized" meal about probably 1/2 to 2/3 of the time. My dad cooks sometimes. We get take out food sometimes, sometimes Pop picks up something, sometimes I pick up something, sometimes we order a pizza... it just depends. Sometimes we do our own individual thing. Like I say, it's weird that we don't have organized meals more often but we all have such different appetites and nutritional requirements. I don't hate cooking but the physical process of cooking is difficult for me. If I cook I'm usually in too much pain to enjoy what I'm eating. I keep a stash of frozen meals and soup and easy to assemble things... baked potatoes or steamed shrimp or salads. At any rate... since I hadn't been picking Austin up from work, I hadn't picked up any groceries lately.

I'm not a fan of the big Super Walmart but I am a fan of Autumn! They had all kind of Fall flavored stuff out. I bought Pumpkin Spice Cheerios, Pecan Pie flavored M&Ms and Pumpkin Pie flavored Chapstick. I told Austin I was going to do a blog post of all things Fall flavored and he said, "You need to do a before and after for the house". Oh. Yeah. That is a good idea. I should do that now that we've made so many changes to the house. I'm mostly just a "lifestyle" blogger in that I write about my life. Some people do blogs that are themed on things like fashion or... food... or... I don't know. I just write about whatever is on my mind at the time. I'm always open to suggestions, though because obviously, in my mind Pumpkin Spice Everything is an interesting blog topic. #notcreative

I bought Cosy some shoes while we were at Walmart. I wanted her to have some shoes to wear with dresses. Not the super fancy black patent leather Mary Janes, necessarily... just something a bit fancier than her tennis shoes. I think I found something that will be sort of in the middle. We'll have to see how she does with them. She's still pretty new at walking. I also bought her some fuzzy slippers because ... how cute are they???? They are the smallest size they come in and I think they're still a tiny bit too big but we'll see. Keeping tags on everything until after we see her on Thursday. And we will, of course, let her take her shoes home with her if mom wants to use them.

Austin dragged me out of the shoe department before I went totally nuts.

Anyways... we were back home before noon and the headache has mostly stayed away since then although it's hiding in the shadows. I've been catching up on the Italian lesson I slept through this morning and watching YouTube and just basking the in glow of my accomplishments today. Tomorrow is (hopefully) a rest day, other than picking Austin up from work and then it's Thursday again!

And I guess that completes the Tuesday edition of my blog. Hope you're all well...love and hugs!