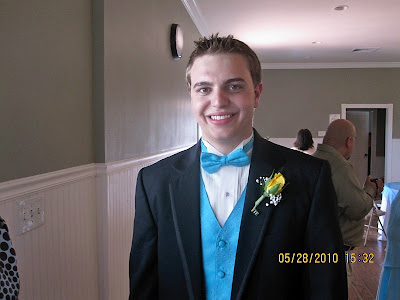 Coffee makes me happy.
My tummy hurts.
Today is Cody's 20th birthday. He said all he wants for his birthday is for Mawmaw to be well.
My mom is still in the hospital... more tests today. It's possible that they will have to do surgery.
My co-worker's dad is scheduled for surgery today which means she will probably be out for a few days.
Would make it hard on the remaining two staff members if I was out to be with my mom.
She wasn't much for visitors this weekend but I hate that my dad is dealing with this on his own.
Although Marquee and Cody are around...
I would vote for Glenn Beck for President but he isn't electable.
I didn't do a lot of the things this weekend I should have and I don't care.
My head hurt most of the day yesterday... still hurts a little today.
I ironed my clothes last night so I wouldn't have to today. Made me feel like a grown up.
I bought coke for Austin yesterday. I rarely do. I'd rather have him drink a 12 pack of beer than a 12 pack of coke. It's that bad for you. It was on sale. I stocked up for him. He drank an entire 12 pack in one day and got nasty when I told him that was excessive and a sign that he still doesn't have any self-control. I will not be buying any more coke.
I enjoyed watching Tim Tebow play for Denver yesterday. He threw an interception but before that, he was doing ok.
He's such a polarizing figure... I think he's an amazing young man and a fabulous athlete.
My boys stole my Gators tshirt that I stole from MJD when I moved out. Their plan is to burn it.
If they could, my kids would wipe every single possible reminder of him off the face of the earth.
I very much enjoyed the opening to the Emmys last night. Love Bruce Springsteen, love all the relevant people that were featured. Jimmy Fallon is hilarious. I loved him in the movie Fever Pitch. If you haven't seen it, check it out some time. It's about six years old.
Still haven't seen Eat, Pray, Love. Maybe over Labor Day.
The cats are jockeying for my attention. Spoiled rotten babies.
I hate commercials for prescription drugs. The thought of people deciding that they need pharmaceutical intervention because of what they see on tv... like choosing their brand of fabric softener. It's ridiculous.
Time to tend my farm and then glam and head to the office.
Happy Monday, y'all.