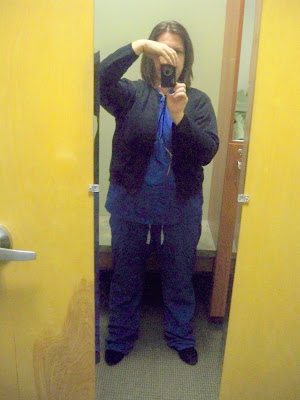 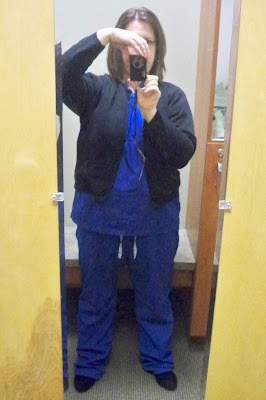 So... today I went to the pain clinic.
They did a THOROUGH... workup on me... in addition to the sixteen pages of questions I answered, this cutiepatootie PA spent about twenty minutes asking even MORE specific questions and then did a physical exam on me.
Oddly... other than some very brief things ONE time with the nurse practioner, nobody has really touched me through this process.
Not that I like being touched in that way, you understand... but you would think it would help diagnosis... and it seems to have.
The PA examined me and then I got dressed and he came in with the doctor and we had a three way chat.
They took the findings of the xrays and MRI and coupled that with the info I gave them on what hurts and when...
(after two months, I know exactly what hurts and when)
They think that yes... I do have osteoarthritis. and degenerative disc disease. and spinal stenosis... and bulging discs...
but they think that the primary source of pain is the spondylolisthesis - where the discs are out of alignment.
And based on the physical exam (which, once again, no one has bothered to do)
and the fact that I lost feeling in my left leg/foot when I did PT (which, they said I shouldn't have been sent to PT)
they think I have an "unstable spondylolisthesis"... which means that as I move and/or in certain positions, the vertebrae move.
which would mean, eventually, surgery to stabilize it.
What is happening... when the vertebrae get out of alignment they are squeezing off some nerves...which is why I'm uncomfortable sitting, standing or lying down but can get comfortable when I'm reclined... as that's the position that forces the least amount of compression on the nerves.
SO they sent me for xrays to see how my spine looks when I'm bent certain ways...
and in the meantime, they're going to do two epidural injections into my back, spaced a few weeks apart and then...
on my birthday (it was a convenient time to schedule it as I had already planned to take that day off to watch the Royal Wedding) I have a follow up appointment and they'll determine if in fact there IS an unstable spondylolisthesis and IF surgery will be necessary.

The good news: they totally took me seriously. the medication I was on was what they called, "a baby dose" and they prescribed me the same things but in a stronger dose which should give me much better pain relief.
I'm not on any narcotics, btw.
I made the right decision discontinuing physical therapy. (I was glad to have that validation)
The bad news: I have to come up with $200 extra bucks in the next month for the two injections.
AND... they think that sooner or later I will have to have surgery.
Remember when this was just a simple kidney stone?

I've got a copy of the xrays and I've been looking but.... yeah... I can't tell anything.
I've got to find someone who can drive me on Thursday.
OH.... I didn't mention that the first shot is on Thursday. I'll be given some loo-loo medicine... sort of a Michael Jackson cocktail (too soon?) like what I was given for my wisdom teeth... and when I'm visiting with flying pink elephants, they'll roll me over on my stomach and inject me. THen... they wake me up enough to be ambulatory and somebody takes me home.
Won't be able to drive afterwards.
Ok... that's it for now... time for Farmville. I need to decompress.

More later...
Oh... I forgot to explain that I'm in scrubs because the imaging center gives you scrubs to wear instead of a hospital gown... and I had on my cute boots with the scrubs... and a sweater because it was cold.

what is between your legs??? LOL

Cute about the scrubs! I think we all look cute in scrubs. Matter of fact...I want some! lol However, I am concerned with all that is going on with you. I AM glad they are finding answers though. I know you have been waiting a while for that. Good luck to you. Hope you find a ride for Thursday.

I am glad you found some answers, know what is going on is so much nicer that wondering.