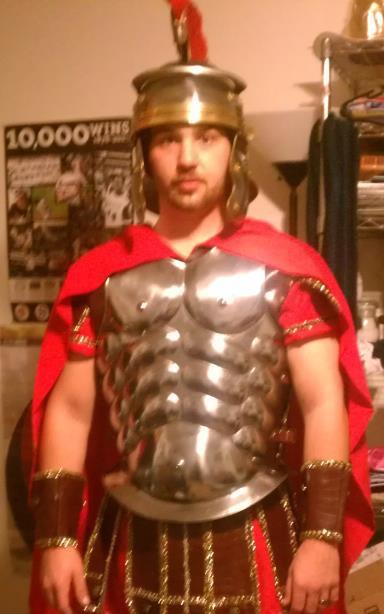 How much do I love this picture of my first born, almost 25 year old son? BooBoo the Gladiator!
He's always been good at Halloween costumes. One year - when he was about 10 - he went as the Unibomber... complete with hooded sweatshirt and sunglasses. It was HILARIOUS! I mean, not the Unibomber himself but... that he was that attuned to the news.

When he was almost 6, George H.W. Bush was running for President against Bill Clinton. President Bush did one of those campaign appearances in a newly developed section of our neighborhood which was such a big deal that we checked Ryan out of kindergarten so he could go and see the President. I mean, how many times in your life do you have the chance to hear a President speak? There was a huge crowd... it was about a half mile from our house so we just walked... and Ryan was very attentive and interested. A local political reporter (Bill Niget for those who live in Atlanta) wanted to get a cute kid on the street soundbite so he asked if it was ok to talk to Ryan. "Sure... " we said. He asked him, "if you were old enough to vote, who would you vote for?"  And Ryan said, "I would vote for President Bush because Bill Clinton thinks it's ok to kill babies before they're born"... talking about abortion. The reporter looked away dejected and said, "I can't use THAT". Ha!

Time change did well by me. I stayed up until 10:30 and slept until almost 7 this morning and the first light of day was already peeking through.

Keep us in your prayers this week, if you would. Austin has to retake the retake of the math graduation test. It's his third time taking the test. He has to pass this to be able to graduate. He's had over a week of "remediation" (he says, "It's just studying") one of those fancy education words that makes it seem important. It is important, without a doubt. I know he's nervous because he said, "It's not a huge deal if I don't graduate this year". Well. Yeah. It kinda is. I think he's also afraid about what happens after high school since we're just not sure how the college thing will work since he doesn't have a license yet and won't have access to a car when he does. There's no room in my budget for an extra car or for insurance on a young man. It just feels like we're living with so much uncertainty. I'm tired... weary... frustrated... and have spent the weekend trying to figure out our budget from between now and the end of the year. He came in my room last night to tell me what he wants for Christmas - an android phone - if you've seen my phone, it's a tiny little cheap pay as you go phone that can't even take or receive pictures. He said, "walmart has layaway"... yeah... so if I pay it now or pay it out the three paychecks left until Christmas, what does it matter? Anyways... the point is... we're both facing huge transitions in our lives and the uncertainty of my health and his future hangs over us like a thick cloud.

Time for me to grab a shower and ... do nothing. Hope you have a great Sunday!

Please call me. I want to talk to you about an idea I have for us both. I called and LVM a few days ago. I am helping an older friend of mine prepare her place for the winter today, but not until around noonish. Maybe I'll just call you!! Love her, him.

What kind of android phone?

Michael... I have no service here at the house. Will call you during the day today. Beth... I don't know exactly... something he found in the Walmart sales flyer.
*hugs*

Androids are touch screen phones, I believe you have to have a calling plan for them and according to a family member (who worked for a cell company) They are not worth the money.