Getting Past the Weeds 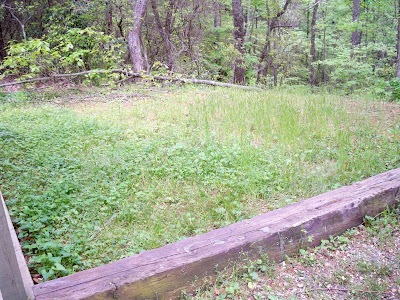 This is my yard. Not much of a yard, is it? We live sort of on the side of a mountain/hill/whatever you want to call it. 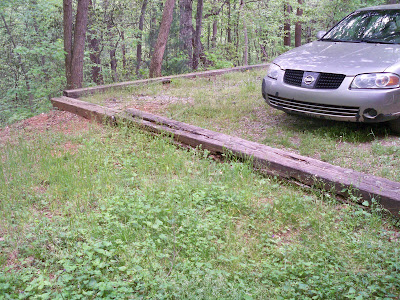 When we first moved in... actually, for the first eight months we lived here... the "grounds" (so to speak) of our "apartment complex" (in quotes because it's really just a half dozen buildings with 4 apartments each owned by the same nice lady) were maintained by our upstairs neighbor. They moved and things are really looking unkempt and overgrown and... wild, in a way.

This morning I had a bear of a headache... the kind that makes you want to take any and every drug in your medicine cabinet (except mine is a drawer) in hopes that something, anything, will make the headache go away. I didn't. Instead... I took a drive into Clarkesville and stopped by the Dollar General to buy some ibuprofen liqui-gels. I've tried just about every migraine medicine money can buy and nothing works as well as four ibuprofen. Always four. It's the equivalent of a 800mg motrin so it's not a risk to my liver or anything. Actually... my last blood test... oddly enough... showed my liver function was completely normal. Nothing ELSE was normal but my liver function is. Thanking God for small favors, right?

Anyways... I drove into Clarkesville... about a ten minute ride from me... mostly just curvy, wooded roads... residential... no stoplights (just the one, actually) (wait... there's two.... anyways....) a couple of four way stops... easy drive, even with an ugly, bear of a headache. And, I decided to go ahead and drop off my power bill since I was *that close* to the place where you pay it. It was a pleasant drive and I cried the whole way.

I had to allow myself a little time to grieve. And so I did. I don't recommend this sort of thing with a headache because it takes you in the opposite direction from being "headache-less" but I just couldn't stand it another minute. Ultimately, because this is the way that I'm wired, God spoke some truths into my heart that brought me such incredible peace and encouragement. No weapon formed against me will prosper. That is what He has promised me. I believe it so strongly that I gave the very same encouragement to a friend who is engaged in her own battle-not-of-her-own-choosing against someone else who has abused their power for far too long.

But in addition... He got me thinking on the beatitudes... you know, the "blessed are..." verses. I'll post them at the bottom of this entry for you to read, if you like. I believe with everything that I am that God didn't bring me this far to let me fall. I believe that there is nothing that happens by chance or circumstance. I would have written this story an entirely different way. My scenario, my plans were so very different. I tend to be a person who sees the path only through to the next bend in the road... and my next bend in the road was Austin's graduation and maturation to the point where he was no longer entirely dependent on me. I would have worked, Lord knows I would, as long as it took to make sure that he was settled and safe.

My entire adult life, my entire career, every job I've ever had since 18 years of age has been because of my kids. I was a working mother because I knew that was the *only* way to guarantee that my kids had the things that they needed.
I would never. ever. give up. on Austin.

And then I pulled into our driveway... overgrown with grass and weeds and such... and remembered the tranquil beauty of this place when I first saw it. Yes, it's just a little basement apartment tucked away, down a dirt road, where the neighbors dogs come visit and if you hear tires on the gravel, you know someone is on their way to see you... nobody comes here by accident. Right now it's overgrown and weedy and forgotten and needy... but it's still quite a beautiful sight to me. It's home.

And I realized.... that my life is a little bit lost in the weeds right now. Pain separates you from life. When you have to focus all of your energy on the very basics, it's hard to focus on much else. I'm paralyzed in a way... can't really get on with the next step until this season of life is finished. Can't really apply for jobs with other agents around here when I know that I run the risk of everything I say being funneled back and potentially used against me. I can't defend myself without accusing someone else and I'm not really wired that way. I can't see around the bend right now... but I'm trusting God and I know, that in His time, the weeds in my life will be pulled out, cut back, cleaned up... and I'll see the path more clearly.


3 “Blessed are the poor in spirit,
for theirs is the kingdom of heaven.


4 Blessed are those who mourn,


for they will be comforted.


5 Blessed are the meek,


for they will inherit the earth.


6 Blessed are those who hunger and thirst for righteousness,


for they will be filled.


7 Blessed are the merciful,


for they will be shown mercy.


8 Blessed are the pure in heart,


for they will see God.


9 Blessed are the peacemakers,


for they will be called children of God.


10 Blessed are those who are persecuted because of righteousness,


for theirs is the kingdom of heaven.