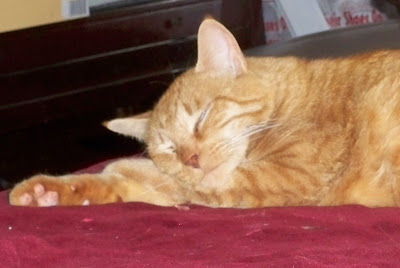 This is pretty much what I'm doing again today. I'm energetic... well, about as energetic as you can be while under the influence of pharmaceuticals. I mean, I wouldn't drive or anything. I'm moving pretty slow - or as little as possible - but my mind is still sharp. Don't put me out to pasture yet even though my social circle this week has tended to include more four legged folks than two legged.
This is Eddie, aka "Ginger Cat" who is partly feral but learning to enjoy the perks of indoor living such as electric blankets. 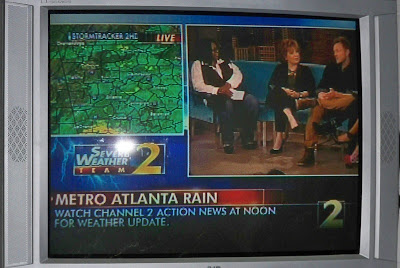 The news channels in Atlanta are apparently bored as well. When did rain - not accompanied by thunderstorms, tornadoes or flash floods - become breaking news? Seriously... not that I want to see Whoopi and Joy Behar up close and personal. I was only watching because I wanted to see Kendall and Kylie Jenner on there. Which, come to think of it, is more embarrassing than admitting that I would stoop so low to watch The View. 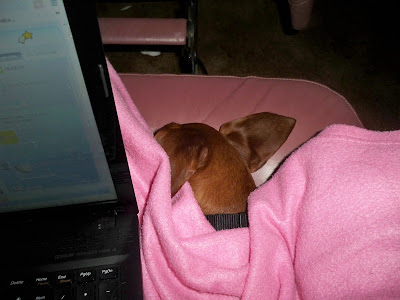 Oscar spent the past few days glued to my left leg in "his spot" either under his special blankie that I keep in my room for him or under my pink snuggie. Here he is molded to the nest. Bless his heart. Today he's cuddling Mawmaw who is home feeling icky too. We don't do bad weather well. I think that my pain this week is also directly related to the fact that we started weaning me off the neurontin that I've been taking for the past two years. This particular medication helps block the nerve receptors - and my doctor hoped that now that I'm on "real" pain meds, I could maybe get away from the neurontin which has some unpleasant side effects (weight gain, for example) and in the form I'm taking is outside of my budget - costs about $250 a month. Fortunately my dr has been giving me samples but that is not a practical long term solution. However... looks like it's going to remain part of my pharmaceutical reality. 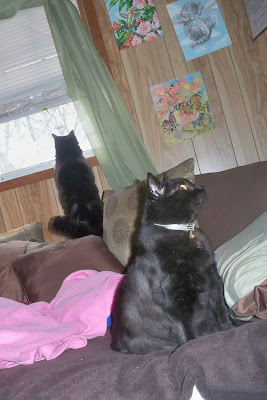 These pictures crack me up because it shows a rare waking moment for my two boys... and they are each guarding a window. You will note the lovely paneling (sarcasm) and the lovely paint by number pictures (serious) that my mom did at some time. My mom has always been really crafty... whether it was crocheting or painting or doing plastic canvas or cross stitch. She has always been a little Norma Stewart. She's not really able to do those kind of things any more since her vision has gotten bad.

Anyways... this room that I'm in is sort of a museum of our family history. The rule is that you can't take anything off the wall. That's why... there is an almost 30 year old rainbow hanging above my bed... one that I made in childcare class in high school to go on a bulletin board with Ziggy holding the rainbow.

And there are several Chinese restaurant calendars hanging up from 2002, 2008, etc. Bryan's drama masks. Michael's piano. Cody's graduation gown. A Young Jeezy poster. Whoever that is. 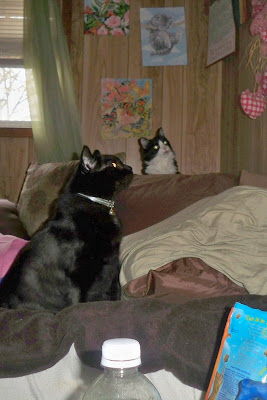 And, of course, the Chat Noir picture that I dearly love since I have a couple of chat noirs of my own. I have a very limited grasp on French but I do know that chat means cat and noir means black. I'm not sure how the plural is supposed to go but... we have 'em... .and now they're looking at the same window. This is the one with the bird's nest that I mentioned the other day.. And how boring must my life be for me to talk about a bird's nest twice in one week? Oy vey. Which is Yiddish, I think, and not French.

The Chat Noir picture followed Ryan here. It used to hang in my living room at the Cardboard Castle (my double wide trailer - for those of you who weren't around for that fascinating chapter in my life's story.) 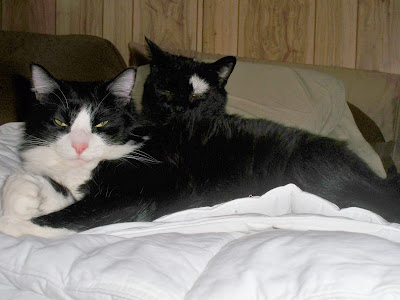 The only picture that I've contributed to the room is a photo of my grandparents on their wedding day - my maternal grandparents. I love it because in it my grandfather reminds me of my oldest son and my grandma is wearing the coolest cloche hat. Cloche, by the way, is French for bell.

How sweet are these boys? They absolutely love that white comforter, especially since I stopped putting the duvet cover on it. I fold it up for them in the morning and it makes a nice, cushy bed for them. And at night... 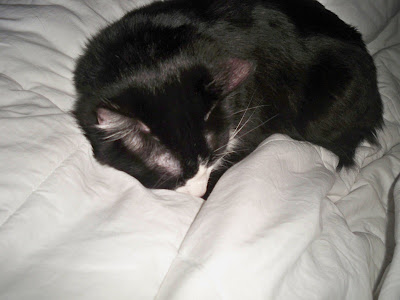 when I cover up with it... they just lay right on top of it, on top of me. Or... their favorite position is on the left side of me - my bed is pushed up against the wall on the right side (because I'm not sharing it with anyone other than cats) - so when they are on the left side of me and I have to go to the bathroom during the night - I have to wake them both up to get up. And usually, it's hard enough for me to get up, just because of the arthritis and how stiff I get when I'm sleeping - but moving those two dead weights is not fun. I've mentioned before.. Little Kitty either goes with me to the bathroom or waits outside the door for me, wanting me to pick him up and carry him like a baby propped up on my shoulder (imagine burping a baby) back to my room. He rarely meows but if I forget to pick him up, he makes an indignant little peep. Lately he has started reaching up for other people to pick him up. He started at Christmas when my brother Bryan was here... and then he started doing it with Cody. Little Kitty absolutely adores Cody! He watches in the window every morning for him to leave for work. Yesterday he reached up for my mom to pick him up (Little Trouble Kitty, not Cody). He's just such a precious little cuddler.

Anyways... so that's my Photo Finish Friday. No Yabba Dabbo Doo here this week as I've barely worked all week. Praying for strength to get back on track next week, especially to feel strong enough to go to the mountain house next weekend to check up on Austin and collect my mail and all that stuff. Hope you have a great weekend... I'm praying for all of you who are in the path of Nemo (even though I think it's ridiculous to name snowstorms)... and praying for a friend who is really struggling. Two friends. No... wait... now that I think about it... I've got three friends who are having a hard time right now. Praying for 'em all. Love and hugs, y'all. \

And I am praying for you, I hope you feel much better very soon!