I'm taking a break from my cross-stitching marathon to say hello and share a few things. The malady of the day is a migraine in my typical pattern - pain, dizziness, blurry vision - it's a blast. Advil helps a little but these headaches just have to run their course. I just kinda settle in and accept it. That's what I've done today. I worked on long straight lines on my cross-stitch so I didn't have to worry about exact counts.

Austin and his girlfriend have been working in VBS at her church this week. He is surprisingly good with kids, probably because he is just a big kid himself. Tasha is teaching a class and Austin is helping with games. Last night they did something like musical chairs. One little girl with Downs Syndrome got attached to him. She gave him a hug and melted his heart. The middle school he went to in Florida specialized in autism - they divided their special ed kids by disorder instead of geographically which meant that the staff knew a lot more about that disorder than most teachers. It was a great system but would only work in a large school system. At any rate, since he was high functioning autism he was mostly in the regular classroom but was able to go to the special ed class when he was out of sorts and needed "time out". Being in class with the kids who were profoundly autistic really made him compassionate toward kids who are different. I see that in him still and thought it was really sweet that he bonded with this little girl. She reached for him while her daddy was holding her - she was about two - which, like I said,  melted his heart. There were two little girls from our church there and they both were tickled to see "Auggie" which is what Sarabeth and Jamie (and most of our family) call him. 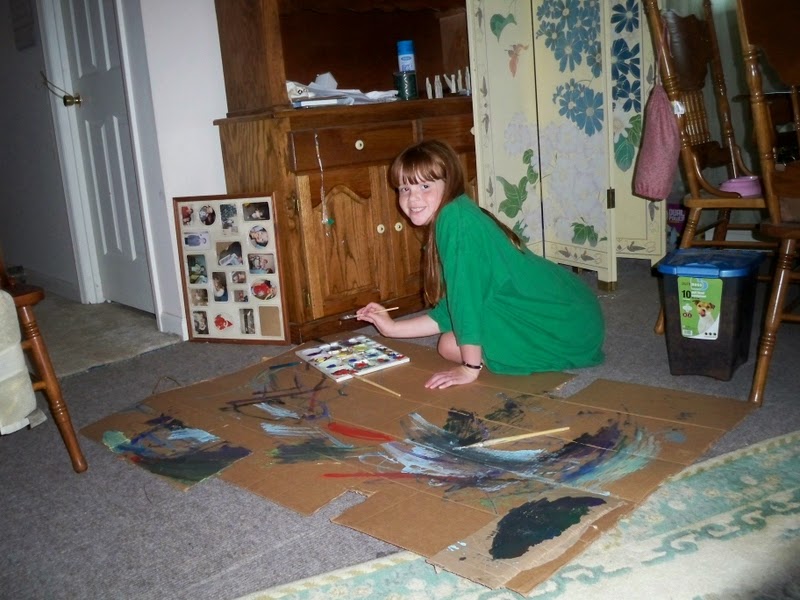 My nieces spent the day with us yesterday. I was having an off day and would tell you that I was probably not fun at all for them but... we watched High School Musical and High School Musical 2, they went to pick up Zaxby's for lunch with Pop, they went out on the lake with Mawmaw and Pop and played games together. Jamie brought out Pop's paint supplies and made a huge mural in the style of Jackson Pollack on a big piece of cardboard we had. I made a comment about it looking like a Jackson Pollack and she said, "yes, but he wasn't a good person. I think he did drugs or something." Discussing art with a nine year old - pretty funny. And true, for the most part. He died while driving drunk. Ultimately the picture ended up looking more Picasso than Pollack but... anyways.

Another funny thing... Pop picked up Zaxby's for lunch for us all. Jamie and Sarabeth ate adult meals and my mom and I ate kids' meals. The kids' meal was plenty for me and Jamie ate every bite of her adult meal. What was funnier was Jamie "taking orders" before they left. She said she wanted a big zax snack and I told her I wanted a small zax snack. She said, "then you want a kid's meal because there's not a small snack". She was right.

I'm watching The Bachelorette for the first time this season and it's about like reading the National Enquirer. You know it's complete bunk but you can't help yourself. I think there are like two more episodes and she'll pick her guy. They did this thing last night where she has the opportunity to invite guys to the "Fantasy Suite" which was essentially like inviting them to spend the night. I don't know... it just seemed a little... I don't know... creepy... that she took two guys there on subsequent nights. I guess it felt like Sister Wives without the kids. It was more than I wanted to know about their dating process. It's kinda like the two nudist communities here off our street - one is just a place where people hang around without clothes (and most of them are people you would NOT want to see naked) and the other is a place where they're naked and doing stuff, like a sex club. Club Med for pervs. It's like you just don't want to know people are doing that half a mile from your house.

Big Brother has been good this season. I won't bore you with details because either you're watching it and you know what's going on or you're not watching and couldn't care less. They show two hours in the house overnight so I DVR it and watch it in the morning while I'm "farming" on Farmville 2. Is it any wonder I have little to blog about? Seriously, there is very little content here.

Other than those two reality tv shows I've been pretty much a PBS and CSpan junkie. I could tell you a lot about what I've been watching on PBS but I'll save that for another day.

The headache is winning. Time to stop focusing for a few minutes. Happy Tuesday! Love and hugs, y'all!