Hello again from your twice a week blogger! Maybe I'll get back in the habit of articulating every day but lately I just don't have much that feels blogworthy.

I'm nearing the end of the big cross stitch project after four solid weeks of sewing every day. A new project is on it's way from Overstock.com... a really awesome family tree that will combine my cross stitch hobby with my genealogy hobby which in my world = perfect! I'm *hoping* to make more than one piece out of that pattern if I'm not totally burned out on it by the time I finish the first one. I'll re-use the pattern and just buy more material and thread. We'll see. 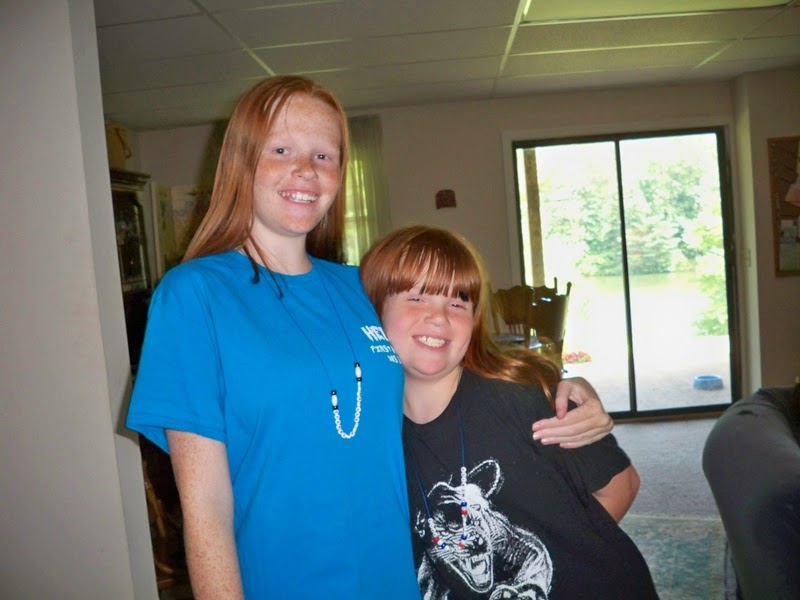 Yesterday my nieces spent the day with us. Their Summer break has flown by - they go back to school exactly a month from yesterday. They will be in Myrtle Beach for a week between now and then but hopefully we'll get another day or two to hang out before they go back to school. Mawmaw wants to have a water day where we make a water slide in the backyard and swim in the lake. Aunt Heather is not keen on the whole lake swimming thing but so far nobody whose been in the water has suffered from it. I want to ride out to Sarabeth's middle school so we know exactly where it is whenever we need to pick her up and I figured we'd make a dollar store run while we're out and about... so we need them at least twice more before the Summer is over!

Yesterday was our musical theatre/crafts day. We watched Gypsy, Seven Brides for Seven Brothers and The Music Man. I was a little unsure about showing Gypsy because at the end of the story Louise becomes a stripper but... she wasn't really a pole dancing-dollar bill collecting exotic dancer - it was very mild burlesque with her wearing more than most people wear to the beach. I ran it by my sister-in-law who had not ever seen it (!!!???!!!) and she checked the ratings which - it was made in the sixties and very clean cut as far as language and stuff - so she left it up to my judgment. The girls did have a lot of questions about why Louise decided to do burlesque and why she was mean to her mom in the end. It opened the door for a discussion about people who have their priorities wrong and want to be famous, even if they're doing something they shouldn't do. The girls felt like being in "show business" made everybody "mean" to each other in the end which is a conclusion that had never crossed my mind before. I think they enjoyed the story of Seven Brides the most although - they are totally my girls and noticed the fake backgrounds and poor production quality of it. They wouldn't TELL ME which they liked the best but they seemed to enjoy the music in The Music Man the most.

Mom had found a cool craft where you melt beads in a cake pan or cupcake pan and make suncatchers/Christmas ornaments. It smells horrendous but was a fun/cheap/easy craft and the reaction of the girls when they saw their melted creation made the smell totally worth it! Made me wish I could find shrinky-dinks to do with them. She also had beads with letters on them so the girls were able to string necklaces with some leftover embroidery thread that I had. Jamie found some cool crafting supplies on the top floor in the guest rooms - paint and foam shapes and just all kind of random things - so we started an art supply box for her. I'll have to remember to save her some toilet paper rolls and random things to use. I have a big (but dwindling) supply of sharpies and random pens. She likes making things. Sarabeth is always sort of nonchalant about doing things in the beginning but once Jamie has made something she gets into it and enjoys herself.

Pop took Jamie out to pick veggies from the garden yesterday morning and she skipped in all happy and excited about her basket of produce. She has so much enthusiasm about everything she does, it's contagious. Pop made the girls black beans and rice for lunch (which is one of their favorite meals) and went to town to pick up extreme moosetracks ice cream for Jamie because she loves it and we were out. It's a shame all my nieces and nephews don't live close by because my parents spoil grandkids rotten! 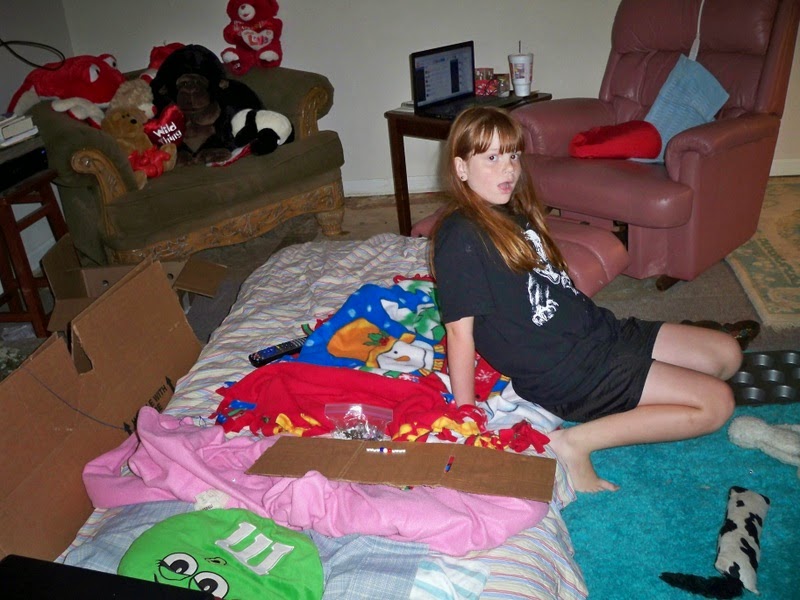 We put a single mattress down by the stone hearth in my living room to make a cozy nest for the girls. It takes up a little space but not much and it is a really cushy place to lay and watch tv. I've crashed on it myself once or twice. I don't have a tv in my bedroom and I love watching tv while I'm falling to sleep. Lately my habit has become falling asleep on either the mattress or the couch and then transferring to the bedroom halfway through the night. I wake up once or twice during the night anyways.

The only downfall to having a nice cozy place in the middle of the room is that the cats enjoy sleeping on it (especially Stubby who has trouble climbing on to the other cozy spots around the house since he's missing a leg). The cats got into the habit of sleeping there but when Jamie is here they can't. She's highly allergic to cats. We keep her blankets and pillows packed away in a closed trash bag when not in use so that they are as fur free as possible in a house with six pets. In between visits we wash her stuff and put it back in the bag until she's here again. It seems to work pretty well and she hardly ever has any reaction to being around the pets when she's here. Yesterday, however, Stubby kept wanting to get in Jamie's nest with her and we kept having to evict him, poor trick. 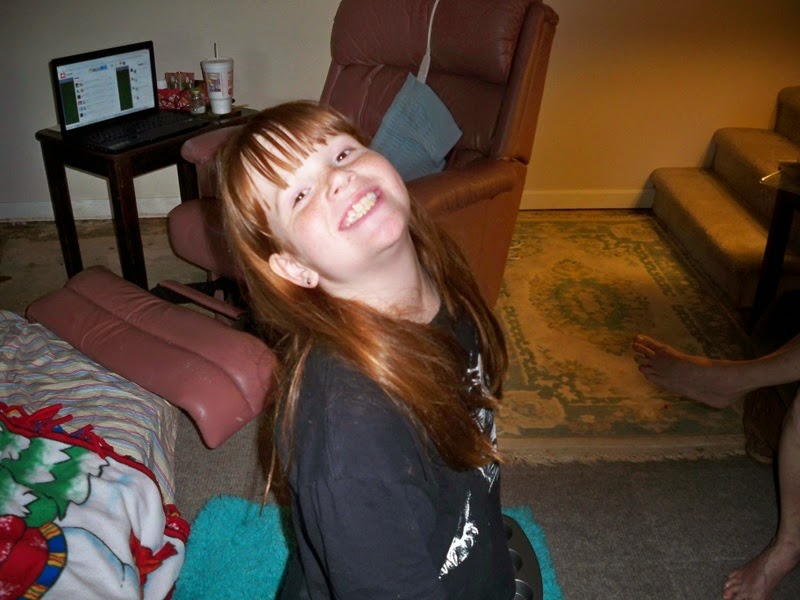 So far it looks like my tick bite won't be fatal. There are two spots from the bite that are a little red but no rash or any of the other symptoms of anything that looks potentially life-threatening. My pain level has been a little better this week than last and although I'm still dragging, I'm not feeling the overwhelming exhaustion that I had last week. Usually when the girls are here I am up and about more and always have a boomerang day of exhaustion afterwards but since yesterday was fairly sedentary, I'm ok today. Most of the tracking up and downstairs was my mom, getting craft supplies and snacks and drinks and so forth.

Anyways... it was awesome to spend time with the girls and today it's awesome to have a quiet day to watch my adult programming and nap at will. Hope your week is going well! Love and hugs!