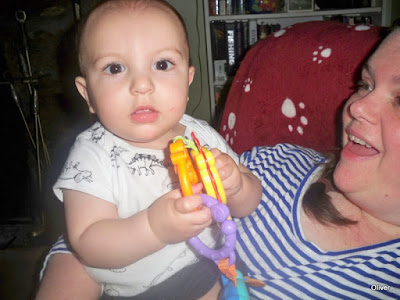 I watched Nancy Reagan's funeral. It was really moving and emotional for me, not that I was particularly fond of Nancy Reagan. I mean, I didn't think I had any strong feelings one way or another. The Reagan years were my teen years and I was leaning Conservative even then - small government, pro-life, that sort of thing. I thought the whole astrology thing was kind of weird at the time. But I gained respect for her during his battle with Alzheimer's and I was really empathetic with her while watching his funeral. Watching the coverage of her funeral I had a feeling like I was watching the end of the world as I knew it... the last of the Reagan years... the end of my generation's Camelot. There were many familiar faces, albeit aged. Hillary looked so ridiculously awkward sitting between the Bushes and Rosalyn Carter. Hillary was not their kind of First Lady, having none of their grace and sincerity. I found it interesting to watch the reactions of Nancy's son Ron, a noted atheist, during the pointedly religious funeral. He smirked a lot. In a way, he epitomized the difference between his parents' generation and his (mine)... the lack of respect for things that should matter, like God and patriotism. It was poignant. 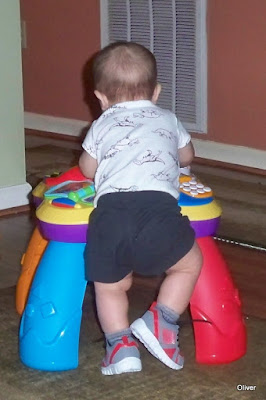 I had to record part of the funeral because my mom sent me a text to let me know that she was on her way home with Cody and Marquee and Oliver. We expected them on Saturday and I really needed a shower so I set the funeral to record while I grabbed a quick shower. After giving my "community partner" a very detailed explanation of how I modify the act of showering to make it less painful... I took a fast, abrupt, rather painful shower. Worth it, of course, to get a few Ollie cuddles. I wish I had more time with him. Between my doctor visits and my mom's Grandchild Tour of 2016 it's going to be April before I can get away to stay a few days with him. He's so solid and strong physically in comparison to Cosette's petite and delicate structure. She's louder and more "outspoken", if a baby can be outspoken, while he's more reserved and observant. I wish they had been able to play together. I want my grandbabies to be buddies in the same way that I always wanted my kids to. Photos in this blog post are of Oliver on Friday.

Donald Trump. I don't know what to say. If our choices are Hillary and Trump then I seriously worry about this country. Not that I want to move to Canada... although that Prime Minister is much easier on the eye than anyone we've had in office... but I just feel that we in no way are the nation we used to be / ought to be. I don't want to build huge fences at every border but I do think we need to have a closer watch on who comes into our country. I don't think we should ban Muslims any more than Hitler should have banned the Jews but I do think we need to be aware that in the eyes of Islam "we" - Christians/Americans/Westerners are the "infidel" and they are commanded to eliminate the infidel. It's not "hate speech" to be aware of your enemy or to be pragmatic about our security as a nation. I appreciate our country as a melting pot but I believe there should be a definitive path to citizenship which encourages legal immigration for those who want to pay taxes and become contributing members of society. Trump is harsh and rude and... weird... I don't trust his politics. I believe him to be a liberal in conservative clothing but I don't know that the Republican Party has anyone more likely to win versus Hillary and there is no limit to the amount of dislike I have for Hillary. 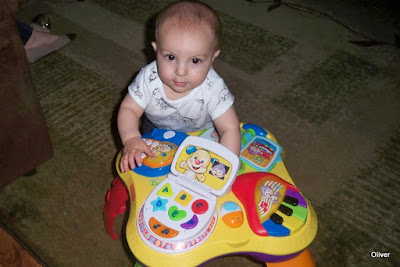 Yesterday was the most beautiful Spring day you could ever imagine! Cosette went to the park for the first time and loved the swing. Not so much a fan of the slide, however. Tasha posted some cute short videos on her FB page, you can check those out if you're Facebook capable, I don't think they're private. My parents did a big burn of all the accumulated brush and debris from over the Winter. I'm terribly afraid of fire so I had to just stay away from the windows and pretend it was just somebody cooking on the grill. After sitting on the back porch for a bit later on with Little Kitty I think I know why my allergies are bothering me more this year. Little Kitty loves rolling on his back on the porch in the sunshine. He was covered in dust/pollen but his fur is so thick that you could barely tell. He sleeps with me... even for a lot of his many "catnaps" during the day. I think he is pollinating me. 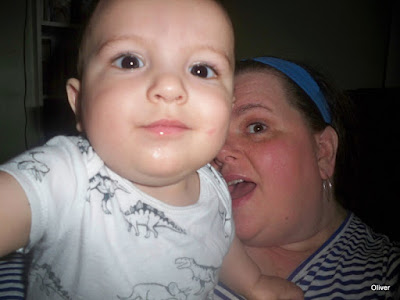 Cosette came downstairs to Nana's for a visit when she and her mom returned from hanging out with Grandma and Grandpa all day yesterday. We were waiting on Austin to get home from work to have dinner and Cosy was a little fussy. She had a busy day. We went out on the porch for a bit and she enjoyed swinging on the porch swing. Then we came inside and she was just a hot, whiny mess... I picked her up and walked her over to my china hutch and opened the doors so she could see all "Nana's Treasures". I have a lot of teacups and teapots and a few treasured heirlooms. I did have my last remaining Smurfs in there until she saw them during our last visit to Nana's Treasures. I let her pick out a tiny teapot that I got from Avon. It's sort of a hard plastic material. It's not completely unbreakable but it wasn't all that fragile either. She chewed on that teapot and totally chilled out looking at all the other special things. I only mention it here because that was such a special snapshot of why it's unique for me to have a granddaughter... especially after having all brothers and only sons... Baby Girls are so different! 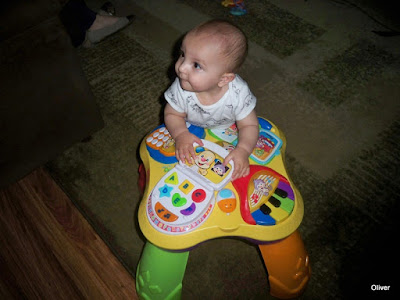 Of course, I am also just as impressed by how strong and sturdy and FAST Oliver is... and how adorable my new baby nephew is... there will always be much love for boy babies in our family, too.

For breakfast today I had one of those premade packs of sliced apples with caramel. You pay more for prepared produce but I am more likely to use it if it isn't labor intensive. My weight is crazy out of control. I swear that steroid shot added ten pounds! The more produce I eat / less processed foods I eat, the better I do. So I had the apples and then bagel chips with hummus. I bought the Boar's Head hummus this time... much like the Boar's Head pickles, I find their hummus to be superior to my usual brand - Sabre. It's creamier.

Going to try to sew a bit today. My shoulder wouldn't let me do much yesterday and I did a lot of bending over holding Cosy's hands while she practiced walking yesterday so I don't think it's improved much. I've got a dozen "learn Italian" videos qued up on my Youtube because PBS is having their fundraising this week (aka - nothing decent to watch) and I'm dog sitting while my parents are at church. Thinking about ways to make use of that extra hour of daylight... and I guess that's all for now. Love and hugs, y'all!