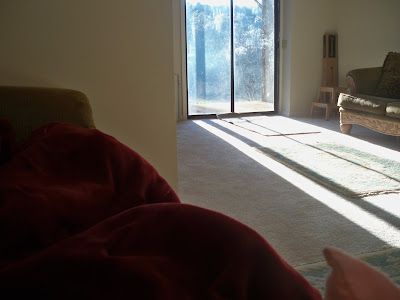 Fever. Chills. Aches. Exhaustion. Horrible stomach pain but I'm not nauseated.... I'm no MD but I can tell that there's more than the usual misery going on here. Is it the dreaded flu? Not sure. I have a doctors appointment scheduled for Monday with the pain dr and Tuesday with the regular dr and I imagine in between the two of them, we'll give this thing a name. Right now, we'll just ride it out. It's perfect timing that I'm seeing my "regular" doctor on Tuesday, though, as it's important for me to have a chest xray any time I have anything upper respiratory going on, since I have a tendency to segue into pneumonia fairly quickly. I'm a tad bit short of breath but not coughing. Honestly, it's more fever/chills/exhaustion than anything.

I'm settled in the basement aka "the Whine Cellar" grateful that it's Winter and that it's about ten degrees colder on this level than on the main level of the house. I've set myself up a little nest on the couch... which isn't necessarily blogworthy, except for the fact that my nests are usually recliners so it's taken a  gajillion pillows to prop myself up in a way that is comfortable and I keep getting these atomic wedgies that require me to reposition. This was the view this morning... apparently we need to do some major windex-ing of the sliding doors.... but not today. I considered it a huge accomplishment that I was able to go upstairs and watch the fur-babies while the old folks were creating a little dog pen so that mama doesn't have to take them all out on a leash every time they have business to take care of. The dogs, I mean. The folks use the indoor plumbing. 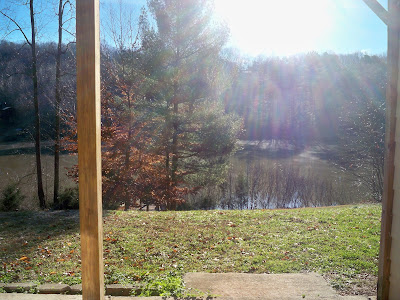 Here's a better picture of the view from the Whine Cellar. If I don't feel like moving, at least the scenery is pleasant. Pop made a run to the store this morning and loaded up on juice and hot cider mix (my fave!) and a few treats since I don't feel like eating much. Pop also bought a space heater for the bathroom down here because it is ridiculously cold. As a rule, the risk manager in me is opposed to space heaters but I'm making an exception in this case. It's funny... we've had this house since August and it seems like every time we're here, Pop spends half his time buying stuff. Cody asked me what we all do while we're here, since there isn't cable/satellite tv... and the answer is: I do the exact same thing I do at home, stay on the internet. Austin does the exact same thing as at home, plays xbox 360, although he also has friends come over to play xbox and/or goes to friends houses to play xbox 360. My mom walks the dogs and fishes and listens to her kindle. Pop goes shopping and goes to church. This house was bought out of foreclosure but it was in good shape... it just takes a lot to keep up two different homes and Pop is always out shopping for something. 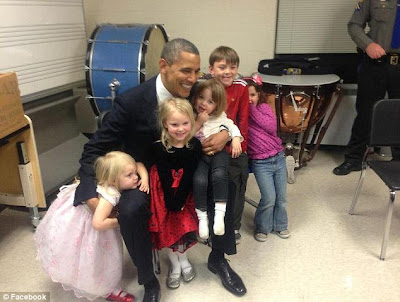 Remember when I shared this photo with a compliment about Obama and how genuine he looked with these kids? Seriously. First picture of him that I ever really thought, "this is a genuine, caring person, not someone taking advantage of a photo op". Something is troubling me about this, though, and it's not just the fever. The little girl in the black and red dress looks exactly like Emilie Parker, who was killed two days prior. I was here at the mountain house (away from broadcast tv) the weekend after the shooting and therefore didn't have my usual overdose of post-tragedy tv viewing. I am not one to believe in conspiracy theories (frankly, because I believe it would take too much to prevent these things from leaking out). Elvis is dead. 9-11 was caused by terrorists. There was only one gunman in the JFK assassination. I promise. I'm not one of those - as a friend put it the other day - a "right wing nutjob". I just can't figure out how the little girl in the photo above is NOT the same little girl in this Christmas photo of her family. You know, the one they kept showing the weekend after the tragedy. She was, I believe, one of the first victims named. 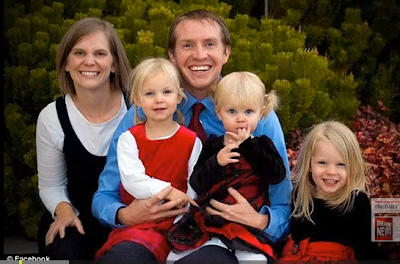 One other thing. When I started researching this whole Emilie Parker conspiracy thing (because you know me, I have to google the heck out of anything that interests me)... I ran across information showing that the memorial page for the teacher, Victoria Soto, was set up on December 10th. Four days before the shooting. I don't have a clue what any of this means or if it's all just some big cosmic coincidence. I hope this doesn't get me on the no-fly list (not that I ever go anywhere) for bringing it up. It's just weird. There's a lot of other stuff that doesn't add up when you start looking into it. I don't think it's a gun control conspiracy. I don't care anything at all about having guns but there are reasons to have them, legitimate reasons, and I would support the  rights of law abiding citizens to have them, because ultimately if it's illegal to have guns, only criminals will have them. I'm not comfortable around them myself. A co-worker at a previous place of employment kept one close by and it made me feel less safe. I don't think the newspaper that printed the names and address of people who own guns in their area was right to do so. If my son's dentist can't tell me what time my son's dentist appointment is due to privacy laws, people shouldn't know whether or not I have a license to have a gun for the same, even better reasons.

Anyways... that's what I'm doing today... staring at the lake through handprints and trying to make sense of this issue and just wishing I felt better. Not that I'd be doing much different, I'd just like to have the option.

In my research on the Sandy Hook shooting, I came across a you-tube video called "Sandy Hook---Fully exposed" that talked about the 2 things you brought up, as well as several more, to show how the whole thing was likely a hoax. It is disturbing, I will warn you. We need to really be in prayer for this country! I am praying you feel better, also