It's time to tell the truth, the whole truth and nothing but the truth, so help me God.
Arthritis is a curse word. I try not to curse so I think the next time I need an expletive, I'll just shout, "ARTHRITIS".
I recommend this for you, as well. That thing that is your "worst thing"... make it your personal profanity.
Mama had a tooth pulled yesterday mid-day and by the time I got home, a couple of hours later, she was still bleeding excessively.
I drove her back to the Dentist's office and there we sat for the next two hours.
They took her back right away but it took that long for the clotting to start.
It looked for a little while like they were going to have to stitch her up (when I had a tooth pulled a year ago, my dentist put the stitch in to start with, I highly recommend this.)
Sitting is not something I do well, especially after sitting at work for my five hour shift.
I was and am in a lot of pain. Didn't sleep well last night.
Mama feels guilty but she shouldn't. It's the dentist's fault, not hers.
I wasn't gonna let her just suffer. Sometimes you just have to buck up, buttercup and do the right thing.
I sat for two hours. Daddy missed his golf game, took care of the furbabies and washed the dishes.
We all pitch in, that's what families do.
The weather is bad, too. High humidity makes my joints hurt, my back, my hands, my feet. 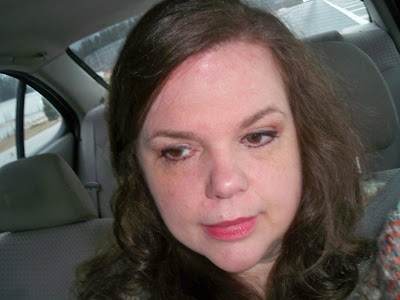 Frizzy hair = pain.
Gray skies = pain.
Rain = pain.
That's just my truth.
I finally gave up on using the duvet cover on my bed. Too many animals, especially little dogs who lift a leg on anything hanging down, like a comforter.
Instead, I just tucked my fuzzy blankets in where they don't hang... and I left the white comforter uncovered and fold it up and put it on top of the bed during the day. I need a fitted sheet in a matching color to go over the box spring since I can't do a dust ruffle or anything hanging down. Those little boy dachshunds are little puddle makers. 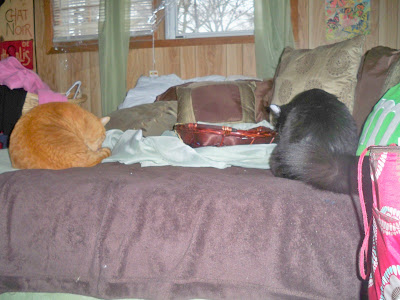 My curtains are crooked. A cat tried to climb them and I haven't climbed up to fix them yet. I will, eventually, get sick of them being off kilter and fix them. If type A is high maintenance and needs everything perfect, I'm probably type Q. I'm like... "eh... whatever."  I used my last bi-weekly burst of energy to hang up the clothes that pile up during the week. The curtains will have to wait until the next power surge.

Today I'm working from 10-3, just to be different. I wasn't scheduled to work today but we have some sickness going around the office and our office manager asked me to trade being off today for being off on Friday, just in case we're not at full staff today.  "A 3 day weekend? Don't mind if I do!" I texted Austin to see if he needs me to come up this weekend and get him. One word answer, "no". I wonder and worry about where he is and what he's doing but he's going through another prodigal season so I just have to patiently wait it out. 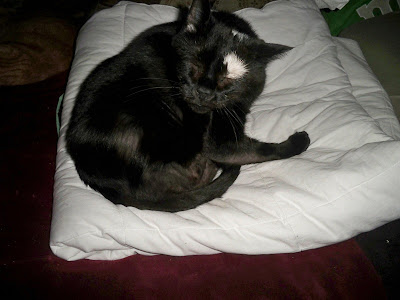 This is Stubby the 3-legged wondercat enjoying his folded up comforter.  He has a really sweet face, you just can't see it well because he's so dark that he doesn't photograph well. I took this photo in the dark so the flash caught him. He makes me think of Grizzabella, the old cat in the musical Cats who sings the song, "Memory". He's not as cuddly/dependent on human contact as Trouble but he crows like a rooster when he gets the slightest bit of affection. He starts his crazy little cackle if Cody sits on the bed because he knows he'll get some attention. Cody comes over to love on the cats whenever I'm out of town. I can tell when he's been there because my tv is always set on ESPN. 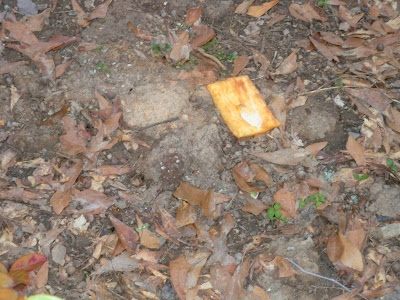 This is how you know Monday is gonna really suck... my mom's poptart on the ground. She eats breakfast on her way to her crossing guard post - you know, the one she retired from at the end of last year. They still haven't trained a replacement for her so she's still working. Yesterday morning when she was feeling so bad with her broken tooth... and running late... she dropped her dang poptart. I had to take a picture of it... it seemed symbolic... even more so after the day played out with her bleeding too bad to eat, take her pain meds or just in general get comfortable. It was much, much later in the day before we got back home and Pop heated up some potato soup for her. I had cereal.

Since this is Truth Day Tuesday, I'll confess that I had cereal for breakfast, a bratwurst that my co-worker brought for lunch and cereal for dinner. Cuz that's just how I roll. Nary a veggie or piece of fruit in the bunch. It's little wonder that my cholesterol is off the charts and my strength is waning and my arthritis is flaring. I need to do a better job of eating nutritious food. I know better.

T-minus two hours until I need to start getting ready for work... 8 hours plus until I'm back in the nest, Lord willing.

So ... that's my truths for the day. Anybody have anything they want to share? Comments welcome. Love and hugs, y'all.

truth tuesday=i hate my life at this moment and everytime I try to feel happy I cry. I hate crying-did I ever mention that?