Yabba Dabbin' from the Northern Nest

I will be drawing for the Amazon gift certificate for those of you who participated in my first ever Truthful Tuesday entry as soon as I come up with the energy to find a writing utensil and someone to help me draw so that it is fair. I appreciate those of you who weighed in with your confessions! Apparently there are a lot of nailbiters among us!

Austin and I made it up here to the mountain house by about 4pm yesterday. It was a dreary, rainy, windy and cold drive up and I was fighting sleep something fierce. For the first time ever, I nodded off while driving.  I'm telling you... I have been so exhausted lately that I can barely keep my eyes open. Fortunately... we were in the fast lane next to the Peach Pass lane with a double lane and lots of reflectors in between so when I started veering toward the concrete median, the noise of crossing that lane jolted me awake. Scared us both to death. Austin spent the rest of the drive chatting nonstop to keep me awake.

About sixty seconds after our arrival, Austin took off to spend the night with Fat Pat and Company. I wasn't particularly thrilled but... the poor kid has been sleeping on an air mattress in the computer room in a place he doesn't want to be... and he's been mostly helpful, even with helping out with this latest outbreak of dogs pooping in the house... he helps with the chores around the house and for the most part is cooperative and pleasant. I can't blame him for wanting to be with his friends. I don't expect to see him until some time Sunday or until he runs out of money. He has a job interview Saturday and I think he's more motivated than usual because not working is the only thing keeping him in Riverdale instead of in the mountains. His plan is to stay with his friends up here until our next trip up. I'm not excited about this sort of open-ended, ill thought out plan but it's his life. I can't live it for him.

At any rate... I must confess that having a peaceful evening to myself was faaaaabulous! I was contemplating what to fix for dinner and dozed off... the next thing I knew it was 8:17pm. My first thought - no kidding - was that it was past time for me to take my sleeping pill and other assorted night time meds. How ironic is it to have to wake up to take a sleeping pill? I decided to have pretzels and gatorade for dinner. I went back to sleep around 11:30... woke up from a nightmare at 2:30... went back to sleep... and woke up again at 6am.... having slept for the better part of the last twelve hours... and by 8am was ready for a nap. This fatigue is no exaggeration. I'm really, completely worn out.

I'll also toss in, since I've declared myself to have the flu at least a dozen times in the past month, that I have been sweating and having cold chills which... could very well be flu but also, is also indicative of a big old ugly fibromyalgia flare, which is more likely the case. I just feel miserably exhausted. And the exhaustion is so overwhelming that, although I could mention another dozen issues that I'm having from head to toe, the exhaustion is the first and foremost thing that comes to mind and, after having fully described the extent of the exhaustion, I'm too tired to discuss anything else. No joke.

Mom, Pop and the three dogs will be up later today, which means that I really don't have to make a run into town and, since I really don't have the energy to come up with a grocery list, walk through a store, carry bags into the house by myself and actually go through the process of cooking, I'll just make do with what we have here for the time being. And besides. I really like pretzels. No, seriously, there were still some sausage balls in the freezer from Christmas (despite having served gajillion dozen of them during our Christmas Eve brunch and despite Pop serving a group of hungry teenagers that were here for a retreat after Christmas) so I had sausage balls for breakfast. There are a few cans of soup in the pantry and some decent stuff in the freezer, so I could made do if I had to.

I already miss my little Trouble kitty. I wanted to bring him this trip but wasn't sure about the road/weather conditions and didn't want to get stuck in traffic with a kitty who panics and pants like he's running beside the car instead of tucked safely in his carrier. I also wasn't sure how well he would do alone with me in the car on the way home on Tuesday. Cody and Marquee take good care of him when I'm gone. I just miss his furry little self. 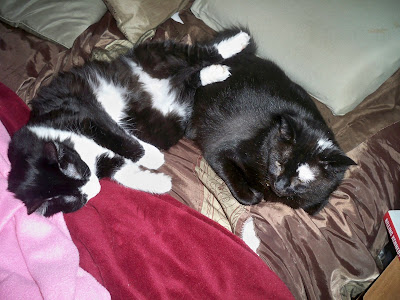 This is him crashed out on his back, using Stubby as a foot rest. He is so blooming obnoxious! There is a little stuffed penguin here at the mountain house that, at a glance, looks like Little Kitty. I've done quite a few double takes thinking that was my baby... but it isn't. Oscar was not happy that Austin and I packed up the car and left yesterday. He has come to recognize that bags mean that people are leaving .... although, honestly, that dog is never alone for more than an hour at a time, he goes everywhere my parents go and if they can't take him, usually either me or Austin are with him so it's not like he's going to be abandoned or anything... but yet... he worries. 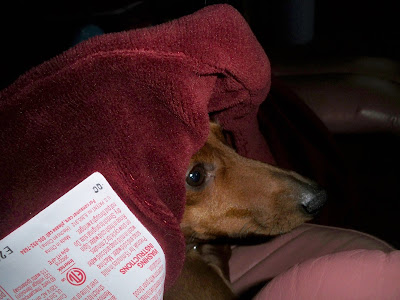 Because... if the hoooomans are gone... who will turn on the electric blanket so that he can be Abdul the Electric Arab?

Anyways... we didn't get the snow that had been forecast for this area last night. It was only going to be an inch or so and it would have quickly melted once the sun came up but still... I am just aching to get four seasons worth of photos from the back porch looking out on the lake. All I managed to get yesterday was this big ole rainy pond full of red clay... 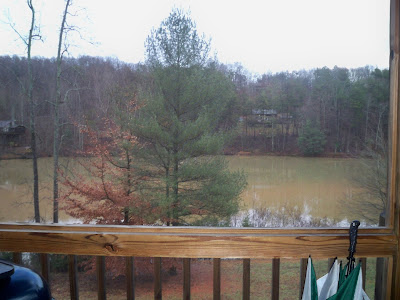 I don't know when my next extended weekend will be but I would say that the odds of having a weather event coincide with a non-working event would be slim to none. By this time next Winter, mom and Pop will be living up here full time, so we may just have to wait until next year to get a good wintry photo.

Anyways... the weekend plans are to just chill and rest. I need to get the keys to my P.O. Box that I reserved online last week and I have a doctors appointment in Gainesville on Monday and here in Cleveland on Tuesday... and then I'll head back to reality... If you're in the old neighborhood and you see this... 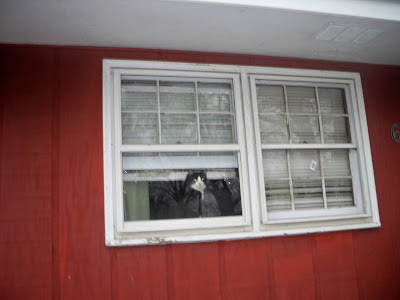 Stop and say hello to my lonely little kitty.

I hope you enjoy your visit to the mountain house. Kitty will survive! I like the picture of the dog with the electric blanket. Made me LOL

Wow, scary that you almost crossed the median, so glad God protected you two! Enjoy the weekend, I hope it is relaxing.

Did I win??? I would love an electric blanket. I do have a space heater in my room (which is up and has 3ft clearance) but it dries the air so quickly!