Going To The Chapel - Day 4 - The Rehearsal

I wish I would have had time and energy to write up the rest of our trip as it was happening because I've slept since then and it's probable that I will forget things. I'm hoping the photos I took will help.

Friday morning I woke up around first light (which is my habit). First light, as it turns out, comes earlier in Connecticut than it does in Northeast Georgia. Who knew? Well, probably anyone who looks at a map because DUH Connecticut is way further East than Georgia.

The rental house had a Keurig machine. I stopped drinking coffee about a year or two (or maybe three?) ago because it makes my heart race sometimes and because my parents drink coffee that is a little weak for my taste. I realize that I could just drink the weaker coffee and have fewer heart palpitations but it's the kind of thing that if I can't have it the way I like it, there's no point in having it at all. This trip I needed coffee and I had coffee and I had no problems with it. That was nice. I had a cup of coffee and pizza leftover from the pizza/swim party at the bride's family home the night before. The girls had cherry poptarts because Pop and I had done the grocery shopping and I am all about indulging them whenever possible!

We had a lazy morning. Some folks went for walks in the cute little town. Some walked along the shore. I took a lot of photos of the rental house and soaked in the hot tub with Sarabeth and Jamie. I've got a huge album of photos on Facebook which you can see by clicking this link, even if you don't have a Facebook account. Here are a few photos from that morning: 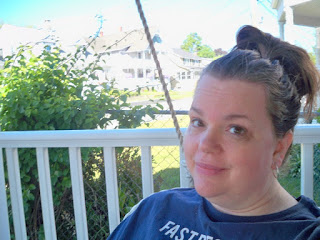 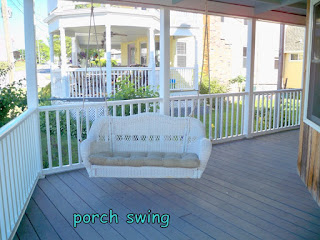 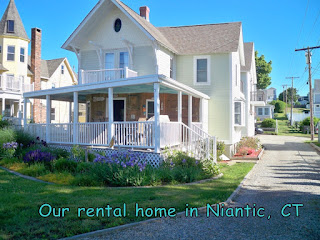 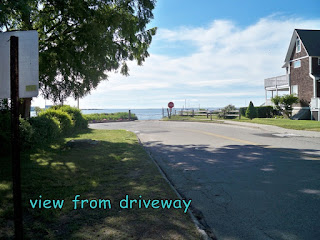 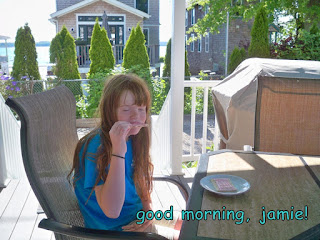 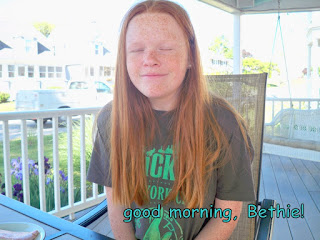 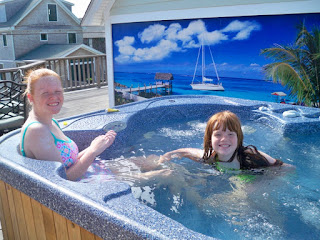 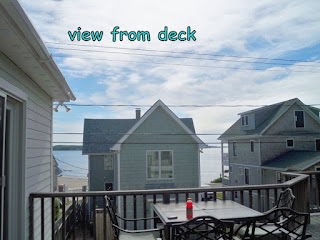 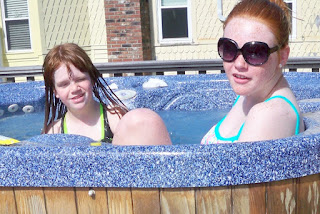 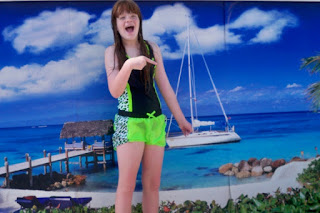 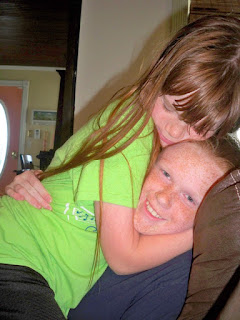 After the hot tub I got a shower and did my hair. My hair is better the second day so I wanted to wash it on Friday for maximum glam potential. I took a long time doing my hair and makeup and then we decided to move me and the girls to the master bedroom. The rental house had five bedrooms but one of the bedrooms was in a really creepy attic and none of us were up for sleeping there. The groom was going to stay with us that night because, you know, seeing the bride before the wedding and all those superstitions. The best way for us to make the most of the rooms we had was for me and the girls to move to the master suite (which had a king sized bed) , Bryan slept in the girls' room, Pop slept in my room and my mom slept on the really cozy couch in the game room. 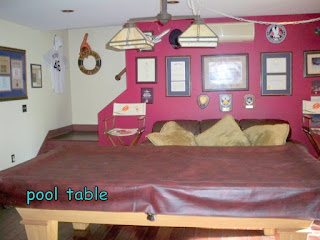 (It should also be noted that mom wanted a break from Pop's snoring). The girls were excited about having a spend the night party with Aunt Heather and decorated the entire master suite with the streamers we caught at Wicked.

I told you in my previous blog about the Naughty Mermaid. When we stepped into the living room at the house the first thing we saw was the coffee table featuring a mermaid as she would occur in nature (topless). The bride's mom (who arranged for our rentals) was mortified that she booked the conservative Gants from Georgia in a place with nudity! We all found it quite funny and just tossed a towel over the coffee table to protect young eyes. 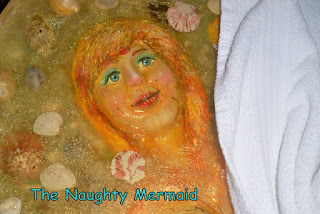 Well, then we moved me and the girls up to the Master Suite and found a few more pieces of erotic art... not overt at all - nobody noticed them the first day of the trip- but not something we would have had in our own homes. Things such as the statue right above Sarabeth's head in the photo below. Tiny, not terribly noticeable unless you're a 10 or 12 year old putting streamers around the room. Also, there's a lovely old classic Marilyn Monroe nude above the bed. It's tastefully done and you can't see any "parts" but it's not something that would put in a little girl's bedroom. Not scandalous... just ironic. 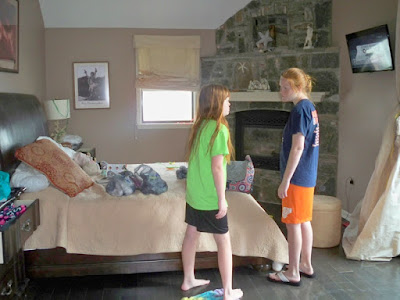 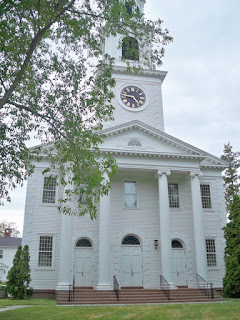 We went to the church for rehearsal. The ceremony was pretty straightforward so the rehearsal was basically to plot out logistics of the bridal attendants entering, where the family would sit and the order of the ceremony. It was in the Old Lyme Congregational Church, which was lovely and quaint. You can click this link to see the church website. 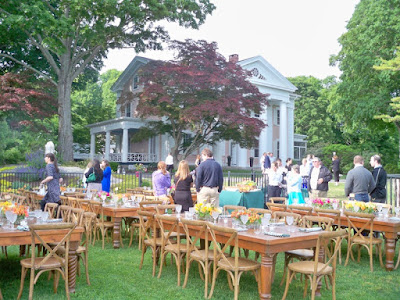 From the rehearsal we traveled to the bride's family home, Tantummaheag, for the rehearsal dinner. Tantummaheag is a lovely home with quite a bit of history, including a near drowning of Albert Einstein while staying there. The views are breathtaking and it was the perfect setting for the nuptial events! For the rehearsal dinner we were in the pool area where they set up grills and held a good old fashioned Southern style cookout. I know I'm going to forget something but the menu included bbq chicken, bbq ribs, beef brisket, baked beans, mac-n-cheese, sauteed green beans with shallots, cracklin' cornbread, apple slaw, corn on the cob... lots of good stuff! The rehearsal dinner was fun for me because it was where I first got to see my oldest, Ryan, and his girlfriend Sara. I had not seen them since Christmas 2013! I also got to see my brother Michael and his sons Cory and Matthew for the first time in awhile. 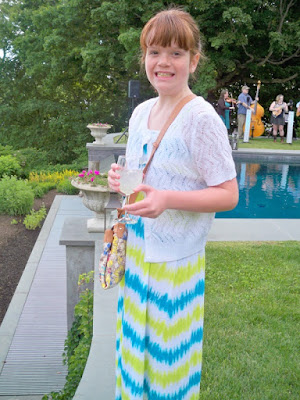 It was at the rehearsal dinner that the bridesmaids and groomsmen had the opportunity to make toasts. Helen's sister Abigail served as the hostess for the toasting portion of the evening. My favorite was my brother Michael's toast. Abby introduced him as :the groom's beloved brother, Michael". When he got the mike he said, "This is a special day for me... I just found out that I'm beloved." And I don't remember what else he said because I've slept since then. It was a bit chilly outdoors, something we weren't quite prepared for since June in Georgia is hot any time of the day, every day. June in Connecticut is not quite the same. Personally I was happy for the cooler weather because I hate feeling sweaty and sticky and because either my new meds or my old body is causing me hot flashes lately. It was cool enough that I didn't participate in the ice cream sundae bar but I did gladly accept the brownies with hot fudge that my sister-in-law Angie fetched for me (I was conserving steps at this point) and the decaf coffee Ryan brought me.
We went back to the rental home after dinner and the girls and I held our first spend the night party which turned into a book club slumber party because we climbed into bed, got into our nooks/kindles and all fell asleep fairly quickly. The bed was soft enough that I could sleep in it all night and large enough for me, Jamie and Sarabeth. We slept great and woke up Saturday morning ready for the main event! More on that later... stay tuned! Love and hugs, y'all! 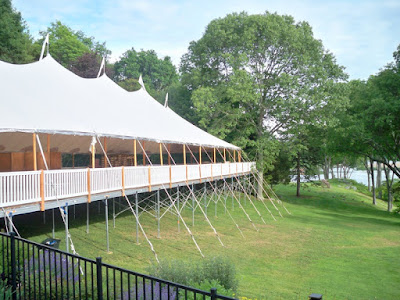 Thanks for the link to your facebook pics.
The entire set up is perfect. This looks like a movie to me.
How awesome.
You look great!
Can't wait for the next post.
Take care,
m~