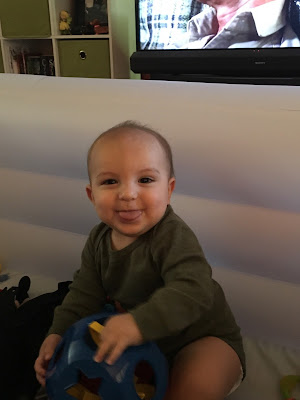 I've got about two weeks to cover and I'm not sure that one blog post will do. I'm going to post an interim post from last week describing two new-to-me afflictions that were curbing my creativity. I'll do that seperately because it's a bit lengthy. I never quite finished it due to the circumstances. In short... I had a dry socket and a new medication that put me into orbit for a while.

Since then... I've had a visit with my Ollie which was amazing and exhausting. He is seriously freakishly strong! I tried to pry a cup with a straw out of his hand and he was pulling me down with it. BAM BAM! He has the most beautiful eyelashes and he's busy and curious and always on the move... nobody else heard it but I promise he said, "Nana" plain as day. He was hanging off of my shirt and saw the chapstick I always have tucked away in my bra and questioned me, "Nana?" and grabbed the chapstick.  I melted! Just like Cosy, I taught him how to put it on (with the cap on) so that he could give good kisses.

While I was with Oliver I had an ugly migraine and because I was not in my nest I didn't get it under control so I had the full fledged puking-my-guts-up pain response that I do my best to avoid. At home I have the perfect position and the perfect temperature and can manage any and every possible variable to get pain under control and it just didn't work for me there. Episodes like that are terrifying to me. They are my primary reason for sticking so close to home and minimizing my social appearances. I don't like for anyone to see me in pain like that. I don't like complaining about pain (although it may seem like it sometimes because I do it so often!) and it's just really embarrassing to me when it gets that bad. I don't want anyone else to feel bad because I feel bad.

Oliver is adorable but he is not a great sleeper. He is also lightning quick... so much so that he has a big blow up swimming pool for a playpen to try to contain him and minimize the damage. He's just curious about EVERYTHING and is a fast crawler and is taking lots of steps. He'll be nine months old on Saturday. My boys all walked by nine months so I'm not surprised that he's that mobile. It's just hard on mommy that she has to keep up with him on limited sleep so Nana's job was to spend the first morning hours with Ollie. We sat in the pool and watched Mickey Mouse Clubhouse and had lots of great bonding time. It's only been a day and I miss him so much already!

This morning I was back on Nana duty with Miss Cosy who has been dealing with an ear infection this week. I cut up half a banana for her breakfast and put it in a bowl. She reached for the uncut half and ate it instead. Miss Independent!

(next day) Not good at finishing blogs lately. Yesterday I went to Gainesville for a surgical consult for the Dr who is doing my hysterectomy since my regular gyn can't do the robotic method, which he thinks will be better for my body type. Turned out that my appointment is actually TODAY so it was a wasted hour and a half drive. I stopped by Subway so it at least felt like the journey had purpose. Hopefully TODAY I will find out when I can have the surgery (and start being anxious about it).  The Subway sandwich was quite good, though.

I was in Britwit heaven yesterday with HM, the Queen's 90th birthday. I'm just so fascinated with her life. There has been no one like her in history. She is compared to Queen Victoria a lot but in my opinion Queen Elizabeth has handled the throne so much better. I mean, Queen Victoria was in mourning for the greater part of her reign and the media was nothing like it is today. I just think about how much the world has changed in Elizabeth's lifetime... just like my grandma's...

Then the news came out that Prince had died... that sort of grabbed my attention. I wasn't really a huge fan - but honestly, I've never been THAT into popular music. I still am primarily into showtunes and Christian music and don't even listen to much that often. But Prince reminds me of my youth. I remember singing Little Red Corvette on the swings at a hotel in Savannah where my friend Susie's parents had taken us over the weekend of my 12th birthday. I remember in the bus heading to youth camp when my friend Stacy said, "have you heard that new song When Dogs Cry?" I still sing it that way... when Darby reformatted my iPod for me and put Darling Nikki in my exercise playlist. Prince was only ten years older than me and there is so much mystery around his passing.  I'm not much of a music fan but I am intrigued by the story.

It's raining hard today and I'm delighted that so far, fingers crossed, water is no longer getting into the basement. We had new drains installed to funnel rainfall away from the house and so far... sooooo faaaaaarrrrr... it's working.

I am still on a break from sewing. Just haven't picked it back up. I am working on my Italian though and have over one hundred days in a row of working on the Duolingo app. It says I'm 5% fluent now. I feel like I know a lot of words but I'm still sooooo slow at interpreting things.

One more week to Cosy's first birthday... one more week to my 48th. My mom did a huge deep cleaning and reorganization of the entire Whine Cellar while I was gone so that leaves less on the to-do-list for Cosette's birthday party but there are still many details to be done. First party in the Whine Cellar but at least I won't have far to go!

Hope life is being kind to you all! Love and hugs!

Don't forget to read the previous blog post (if you're interested) to find out about my dry socket and new muscle relaxer.

Love that little chubby bunny aka Ollie!
He has grown. And so cute.
The red heads aka nieces look so adult like &
different. Growing up.
I don't own any music by Prince but he was a legend
and talented. This is a mystery that will take a while
to unfold and most likely never truly revealed.
Well, it's good news to know that you are OK.
Take care,
Monica