My poor overlooked blog... another two weeks tick by and another inch of dust accumulates. I've been busy - well, busy for me which is what most of you would call "a normal Tuesday". Cosette's birthday party was a lot of fun and I (despite my introversion) really loved having it here in my space. But it was a lot more work than it should have been. My mom and I did what we could to let Tasha put her own stamp on things which translated into a lot, UH-LOT of hours of watching Cosy so Tasha could bake, etc. Next time, we'll have it catered. Not that I don't love time with my sweet girl but I pushed myself waaaaay past my limits and honestly, am still (ten days later) trying to get back to (my) normal.

I posted a ton of photos from the party which you can see here at this link even if you aren't on Facebook. Warning - I look horrible. You can see the pain on my face as I have that nasty red sunburn looking rash that I get when I'm having a "flare" of whatever autoimmune something is taking over my life. Not lupus but the doctor says everything says lupus except my blood test so... I looked awful but I was loving every minute of cuddling my babies. Oliver had a bit of a fever that day (urgent care said it was a virus - the only symptom was fever) so he was more cuddly than usual so I just took a big pillow out to the ball pit on the porch and sat on the pillow cuddling him before the party. My screened porch makes a nice place for a gathering, at least in late April, in the afternoon. It gets the morning sun. And my living room is large enough to have a lot of people gathered without feeling crowded.

Cosy's Uncle BooBoo was good enough to make the drive over from Myrtle Beach for her birthday, even though she's not really sure about his beard. She was warming up to him by the day he left. My Cousin Kevin and his wife came. Cosy's grandpa's boss and his wife came as did the girl who did her birth photography.  Of course the "big cousins" Sarabeth and Jamie and even Jorjanne - who we don't see often - was able to come. Aunt Marquee and Uncle Cody along with Cousin Ollie were there. And of course, Tasha's parents and all of us who live here... so it was a good turnout and we had WAAAAAAY too much food. Again, live and learn. I know how our family does a birthday - cake and ice cream and maybe some peanuts or m&ms to snack on- not a big spread. I ate party leftovers for the next week.

I'm doing my normal late Spring switch to craving fresh fruit and veggies. I think it's the only thing that keeps me from weighing a ton, my addiction to healthy stuff at certain times of the year. I've been having pimento cheese (homemade by Pop) on celery at lunch every day... an english muffin or cereal or oatmeal with a ton of fresh fruit for breakfast and a smallish dinner because when I'm in pain I don't feel like eating much. My pain is always worse in the evening - usually because I've done too much during the day.

Oliver is walking pretty well now. He is 9 1/2 months. Cosy is still "cruising". She walks holding on to things. She will stand and lean against things to play but won't just let go and walk. We practice all the time and I always tell her, "walking is faster". But then again, every day that she doesn't walk is a day that we don't wear ourselves out chasing her.

Cosette is so smart and remembers everything you show her. She loves the cats but every time she would get near them she would get so excited that she'd grab them - big handfuls of fur. I showed her how to hold her hand out flat and gently pet them "soft". Now whenever she sees a cat she puts her hand in that position to show that she's ready to be soft with them. When she went for her WIC checkup there were pictures of cats all around the room and she would point to them and put her hand flat to be soft. The nurse was impressed. She also signed the word "more" last week and said the word when she did it. I started taking her hands in mine and forming sign language from the time she was just a few weeks old. It's amazing how much of it she uses, things like "milk" and "want" and "eat". It makes sense that she thinks putting her hand flat is the sign for cat.

Something funny that she has started doing lately is when there is someone there that she likes or wants to impress, she shows them her toys and demonstrates how to pet the cat. She did it first with Jamie - and then last night my friends' son was over while they were delivering me a big wall unit I bought from their yard sale and Cosette was showing off for him. He had a superman shirt on so Cosy was pointing to her shirt with a picture of Hello Kitty or something on it. Then she wanted to show her bellybutton because we've been reading a book about "where is baby's belly button". 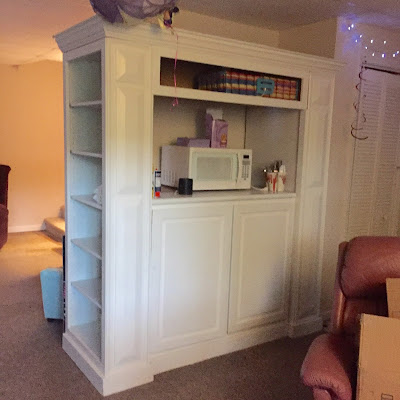 The wall unit I bought is huge but it will make a perfect pantry for me. I've had my food and dishes stored on an ugly rubbermaid shelving unit that is really more for a garage. My friend is raising money to go on a mission to Kenya and had the wall unit for sale for only $100! Her husband was nice enough to deliver it and set it up - which was no small feat because they had to come down the hill and through the backyard to my space. Fortunately Austin got home from work and was able to give them a hand. (I also gave a generous "tip" for the delivery) It has enough storage for me to tuck all of my food and dishes in and the shelving unit is perfect for Cosy's toys and books that she keeps down here. There are so many toys in my living room that it looks like a daycare. I don't mind as long as they are put away when she isn't playing with them. I'm not a clean freak by any stretch of the imagination but I do like for things to be tidy and for everything to have a place. My living room is such a large space - the wall unit helps to break things up a bit between living area and kitchen area and we can tuck Cosy's recliner behind it. I may even put my keurig in the space beside the microwave but we have to put a power strip in the wall so we don't have to move the whole thing to plug things in.

Today is Cosette's one year checkup. She's still nursing but we have added in whole milk to her diet. She spit up a few times yesterday which is out of the ordinary for her. I feel like it might be the milk but her mom thinks she just ate too much. I'm having a lot of pain today (and for the past few days) but I'm on chauffeur duty for the doctor visit so I can't take any pain meds until afterwards. I'll be grumpy but we'll get through it. Turns out that last episode of evil gut pain wasn't the last. I have my preop appointments on Friday and my surgery is scheduled for May 25th. I'm anxious about it but I know it will improve life for me once I heal from it.

I know this in no way summarizes the last two weeks as they have been so eventful. For instance, I finished the entire Duolingo Italian course and have started using a new program - Memrise.com - to study. Memrise is a much more difficult program because you have to spell everything correctly and duolingo wasn't that strict on spelling. I went ahead and invested in their advanced program for $47 dollars a year. That's a fraction of what most language learning programs (like Rosetta Stone) charge. I'm still not back to sewing because of my shoulder / neck pain. The neck pain is new and brings along wicked migraines and dizziness with it. Basically carrying babies wrecks my spine but I can't NOT hold the babies! A few times with Cosy I've just laid down on the floor beside her while she plays but I like holding her. I've also been following my sister-in-law's father's blog as he bikes across the US to raise money for a cycling program in Connecticut schools. I don't have permission to publish his link but if you message me or email me, I'll give it to you. I find it fascinating.

Anyways... that's life in Cedar Hollow, as best I can share it at the moment.. hope you're all well and ready for Summer! Love and hugs, y'all!

Posted by Heather at 8:37 AM 0 comments Links to this post