What I Ate Wednesday - In Bed

Ok, so it's been a week since I last blogged. It's been a rough week. Marvin and I both got sick with this cold/flu misery that sidelined him not one bit but has had me barely able to sit up. Then, in the midst of my misery I had Cosy over (because I missed her sweet face) and wrenched my back while playing on the floor with her and could not unbend. I was hunched over for a few days. But mainly, the biggest issue is the cold. Honestly, it's the sickest I've been in forever. I'm a human snot factory. It's coming out my nose, I'm coughing it up. I'm dosing with various cold meds every four hours just trying to survive. It's sucking the life out of me.

So... when we last left this story... Marvin and I had a lovely visit to Oakland Cemetery that I still need to tell you about but... not today. The next day, Thursday, we had a Cosy day -- where Marvin and I take Cosy on our lunch date with us because she absolutely loves Marvin and he is particularly fond of her as well. We got to her house about midday on Thursday right after two of Tasha's dogs had attacked another one of their dogs so it was one thousand degrees of chaos. I left the car door open (as I do) and one of the bloody dogs jumped into the car and made a mess. We ended up going to Austin's work for lunch, the Old Sautee Market. They have a little bucket of soap suds and big bubble wands set up and I knew that would be a good diversion for Cosy. It was. I have tons of precious pictures but honestly, I just don't feel well enough to go through the process of posting today. They have been on my facebook but I try to share here as well for you non-Facebook folks and I just can't. 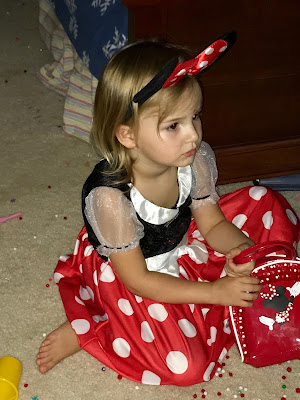 Also, there are some freaking adorable pictures from later that day when she got a package in the mail from Austin's dad and stepmom - I am posting one photo of that although I took dozens because she was so proud of her little outfit they sent her. She's a mini-Minnie. You will notice beads all over the floor. Beads are a controlled substance in our house but she found a vase that my mom had filled with beads and then put fake flowers in... she said, "oh... treasures!" I spent that afternoon teaching her how to thread beads on a string to make a necklace. It was awful sweet. The beads got everywhere, though and that's how I ended up throwing my back out... trying to pick up beads. Once I threw my back out, I couldn't bend to pick up any more beads and they are all over my floor now. It makes me really twitchy. I'm not a neat freak but... help me Jesus... what a mess.

Anyways... so, as I was saying, I've been sick. Austin has been bringing me food. Pop took pity on me and brought me up some cough medicine. I missed date night Tuesday night (we're back to Tuesday nights... long story) because I honestly just didn't think I could stay awake long enough to go out for dinner. Sleep has been my refuge. But I came down to Marvin's this morning so we could have a little time together. It's THAT WEEK for us... the one year anniversary of when he lost his son and I lost my mom. I was prepared for lots of emotion this week but I wasn't prepared to be sick. Instead of having a lunch date somewhere fabulous, he picked up take out Chinese while I slept and brought it to me. He also brought me more cough medicine and cough drops. Honestly, he's just so good at taking care of me. I ate a little but just have zero appetite and then I slept some more and we watched a movie and he went to work and that's everything you missed.

Ha. I'm kidding. Obviously, more happened. Austin and I had a nasty fight, as we tend to do every now and then. I talked to Ryan. I talked to Cody. I facetimed with Oliver. I got messages from you guys asking if I was ok. I talked to Marvin on the phone but not as much as usual because I just haven't been able to stand talking. Have I mentioned that I have been sick? I've watched a gazillion episodes of Bones. I've played a ridiculous amount of freecell on my phone. But I stayed in bed 99% of the time. I only left the house once, on Monday, to pick Cosy up. She had a little bit of an attitude at first but I've programmed her a channel on Spotify that I play through the bluetooth in the car and that cheered her grumpy little butt right up. It's all the kid songs like Mary Had A Little Lamb and Old McDonald, and so forth. Then we went and picked up her favorite - pink donut with sprinkles - and had a really nice day together.

Monday morning Cosy was quietly playing on my floor in my bedroom and completely out of nowhere said, "I miss Marvin" in the saddest little voice you could imagine. Of course, I told Marvin and so he's heading back up my way tomorrow so we can take her out for lunch with us again. Feeling a little emotional here but... it bears sharing... if you want to know the true heart of a man, see who he is to the tiniest of humans. Kids have a highly acute bullsh*t meter. They know if you're good people or not. Oliver loves everybody so he doesn't count for this equation... but Cosy, she's a hard nut to crack. She's particularly introverted and very shy. Her Uncle Cody sees her at least once a month and she will barely make eye contact with him but she loves Marvin. She would barely talk to my dad until Mawmaw passed away and there was something... something that made her want to love on Pop. Maybe there's that little bit she sees in Marvin too but the girl really loves him and I love that she loves him and I never for a minute take for granted that he's willing to give up his day off to drive all the way up to my place to see a little three year old girl. I could tell you lots of stuff about what he has meant to me in the past year - the laughs and tears and unmentionable moments that we've shared and thousands and thousands of phone calls. But the fact that Cosy loves him, should tell you everything you need to know.

And now I'm going to put my laptop away, hopefully not for another whole week but... if it is, just wait for me, I'll be back. I have a doctor's appointment on Monday to evaluate the whole blood pressure situation (it's been mostly ok lately but I had a high reading the other day) and if I'm still snotty, I'm sure he'll give me antibiotics. My lungs aren't healthy so stuff really digs in and takes hold of me which I'm sure, is part of the reason a simple cold leaves me flattened. I'll let you know what's up. In the meantime, I'm just gonna appreciate the folks in my 3-D world and do my best to get well. Love and hugs!