What I Ate Wednesday - Six Feet Under 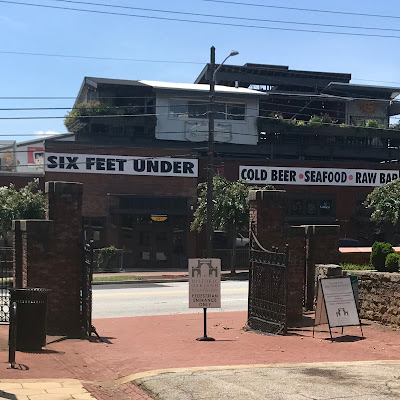 Today's blog is part one of a two part special (it's honestly not THAT special) on mine and Marvin's big adventure today. Part one is a restaurant review of a place called Six Feet Under that - no lie - is right beside one of Atlanta's biggest and most historical cemeteries, Oakland Cemetery. Part two will be more about Oakland. I want to do it in two parts because 1. I am sleepy/not feeling great and I know if I try to blog too much right now it will be lousy content and 2. I want to give you a little extra background on Oakland Cemetery and I don't have time/energy/brain space for it tonight.

Sidebar - I don't discuss this part of my multiple diagnosis' much but one illness I deal with is fibromyalgia which gives you horrible brain fog at times. I also have an unspecified autoimmune disorder that does a number on me when I'm out in the heat and will make me feel run down / really tired at times. I'm also still struggling to adjust to the new muscle relaxer which makes a huge difference for me pain wise but makes me terribly loopy when it peaks in my system. I'm feeling all three hitting me at the moment and it's draining me to where I'm worried today's blog will be more of a blahg. That's just sort of where I am today... very happy/peaceful/content but in such a fog of exhaustion that it's hard to function. 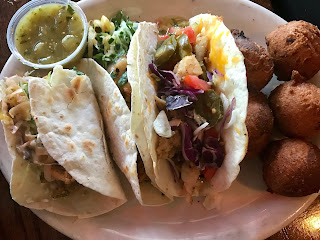 BUT LUNCH... was AMAZING! We went to a place in Atlanta called, Six Feet Under (check the link if you'd like to see their entire menu, etc) which is - like I said previously - RIGHT beside the most historic cemetery in Atlanta. I am Old Atlanta. By that I mean... my family has been here - in Atlanta and surrounding areas - for several generations. Our roots are deep in this city.  I have such an immense love for the history of this city, even the ugly bits, because it gives us our character. Atlanta is a city that does a horrible job of preserving it's landmarks. So many of our cities treasures have been bulldozed in the name of progress but Oakland Cemetery stands proud, dotted with the names of city founders and famous folks. So eating lunch right across from this iconic part of Old Atlanta was truly, an amazing surprise for me. 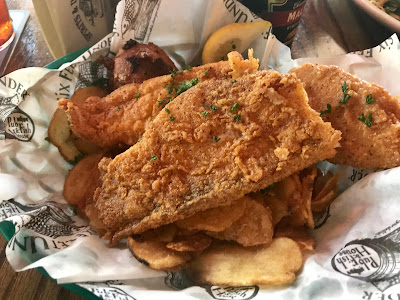 Six Feet Under is sort of a fish/pub type place. They had a pretty extensive menu that was sort of a Southern food / fish / pub fusion with the undertones of the graveyard theme but not so much that it was Halloweenish. Marvin had a taco combo platter that came with a  their catfish taco, fried calamari taco and blackened shrimp taco with hush puppies as his side. I tasted his blackened shrimp taco and it was good but... the blackening spices were a little spicy for me. I had a fish and chips basket that came with the US version of chips... you know, round thin slices of fried potatoes... and mine also came with hush puppies. My chips were... crispy and fried exactly as I would have liked but the oil seemed a bit old. It was a little off. The fish, however, was perfect, browned and crispy and not the least bit greasy (which can be hard to do with fish, I think). I loved the hushpuppies but they did have bits of jalapeno and my tongue is still sore from that encounter. We drank iced tea with our meal... we're fancy that way... and we skipped dessert because we were both stuffed.

Service wise - it was fast, attentive enough and we avoided the usual jinx of if I'm blogging about it, our glasses never get refilled. We got refills. Everyone was friendly without hovering. My big beef with this place is that they've gone straw free which makes me 1. Roll my eyes really hard and 2. Want to buy myself metal straws to tote around. I'm not anti-environment at all but I read some stat that said our straw usage makes up like such a ridiculously small percentage of the entire trash in the world - something really small and seemingly inconsequential - that we're wasting more resources by the effort to be straw free than using straws would make. Marvin says I wouldn't care if I wasn't such a big straw user - and he's true. I prefer to drink through a straw, even at home. It didn't make a huge difference to me, honestly, but it was the first time I had encountered this so... buying metal straws now.

Price wise - it was Marvin's turn to pay so I didn't actually see the bill but I think it's reasonable for lunch, especially inside the Perimeter (inside I-285 - the highway that circles Atlanta). My fish basket was around $14. It was two large pieces of fish, a lot of chips and two hushpuppies.

Free parking is available with a short walk. We walked around the cemetery for just a tiny bit after lunch which made the walk back to the car seem really, really long. I would ... maybe take little kids here. We were there for a weekday lunch so we mostly saw blue collar type workers... a lot of Atlanta Police officers (including one who accidentally whacked Marvin on the head- it was a lady - she got very embarrassed but I told her I do that to him all the time... which he was claiming as police brutality... tee hee).

In other news... I won on HQ - the trivia game that Marvin and I play on our phones. It was my third win and this time I earned $6.05! I would NEVER have won if Marvin hadn't been playing with me because there were 4, maybe 5 answers out of the 12 questions that he had to answer for me. He got out earlier in the game on a question about the Real Housewives franchise. I didn't know the answer but I guessed correctly. And I just lucked out and knew the ones he didn't know!

Cosy's mama posted some really cute pictures of our sweet girl out at Dairy Queen today. I love that she will let her mama put her hair in "dog ears" because she sure as heck won't let me do it!

And... that's about it for today. I'm going to have a bit of dinner then soak in the tub before Marvin gets home from work. I'll do the blog post about Oakland Cemetery some time in the next few days. Tomorrow we're having a Cosy day! 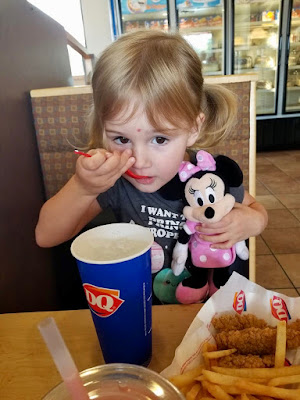 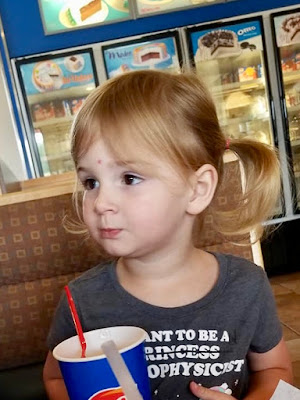