A Lovely Day Where Nothing Bad Happened

See? I knew yesterday was going to be the rock-bottom part of the week. Nowhere to go but up!

And honestly... when your drive home from the grocery store looks like this: 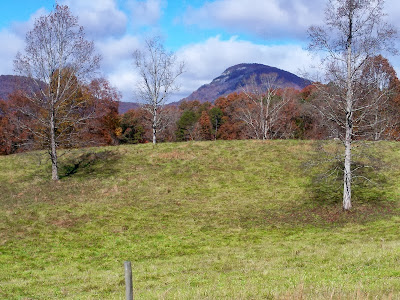 How can you complain?

It seems like we waited all of October for the brightest of the colors to show and it seems like we had about three really pretty days and already, things are on the downward slope. It's quickly going from vivid colors to more muted shades and the strong winds we had today blew a lot of the leaves to the ground. 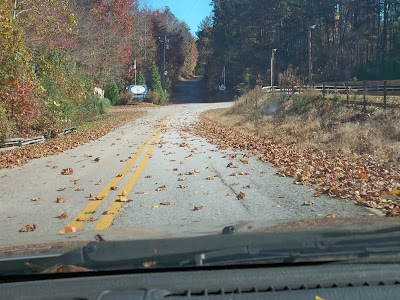 It's still not a bad view. 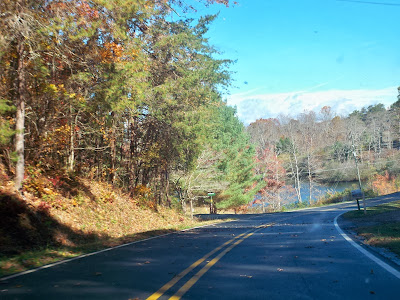 And honestly, a few obstacles don't make for a bad life. A bad week, maybe. It's not like I'm dealing with a demanding boss or bratty kids or phone calls from teachers telling me I have bratty kids or crazy busy schedules or, let's be honest, bills.

I went to the county DFCS office this morning because I had to renew my food stamp application. You have to do it every five months. While I was there a lady came in upset because she had lost her welfare benefits and her food stamps because she didn't come in to do the renewal. She said she never got a letter. I could see how that could happen... yesterday in my mailbox there was a letter dated October 10th reminding me to come in before November 15th. After she left and I went to the counter to turn in my forms, I mentioned to the girl behind the desk that I didn't mean to eavesdrop but I was the only other person in the room so... hard to avoid it... and I showed her the date on my letter and told her that they genuinely did seem to be delayed. I asked if it had anything to do with the government shutdown and she said that no, they use a subcontractor to send out the reminders. (sidebar: as many people as our government employs and they have to have a subcontractor to send out letters? and one that does that poor of a job, at that?)  She said there are frequently problems with people getting the reminders late or not at all but... she haltingly said... renewals are every five months, whether or not you get a letter. She wasn't being rude or unkind. She just said that she hears the same thing everyday and yet every time they talk to anyone they remind them that they have to do it again in five months. This was the case for me. They told me in the office and then when I did my phone interview. It just seems like a source of income or essentials like food would be important enough that you make sure you're in good standing. Not that I'm judging this lady who came in. Just an observation.

I also double checked to see if there was anyway for me to qualify for Medicaid. There is not. Not until disability is approved. She gave me a lovely green card with the healthcare.gov website listed on it. We both laughed. Such is life.

With that task out of the way I made a grocery run that will sustain us for a few days. I felt like I should take advantage of a day that I was mobile. I was having a little bit of trouble with that pesky left hip but I had less pain than usual. 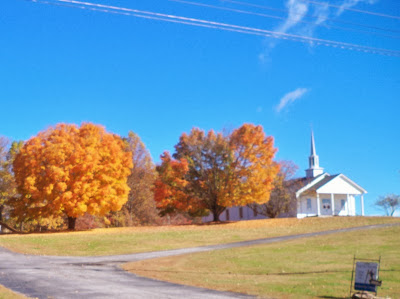 There is this one spot that every Fall is one of my favorites... I tried to catch a picture while I was driving and then I just pulled into the driveway to take a few more shots but by then the pesky left hip had become a painful left hip and I realized that I would have to walk quite a long way to get the view I really wanted. Still... it was lovely.  I didn't make any alterations to the photo other than cropping it. I think I got a better shot of it last year from across the street at the storage place but you can tell how bright the colors are. 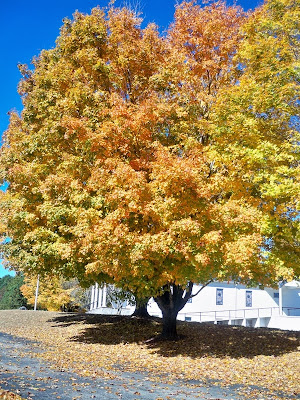 Not as bright as they seemed in person but the sky seems bluer.

Anyways. Mama wanted to get some more painting done so I sat upstairs with the doggies for a bit but I really wanted to curl up in my nest with the kitties and watch a few more episodes of Mad Men. I'm addicted. What's worse... I'm addicted and I'm almost finished with the fourth season and Netflix only has through the fifth season. I'm going to have scrounge around to catch up with season six and I don't even know if it goes further than that. It's a bit steamy... not for kids... but for a history buff like me, especially someone who appreciates period costumes, it's a lot of fun. It takes awhile to adjust to people not walking around looking down at their smart phones. Smart phones make us look pretty dumb, don't they?  I just love the whole business culture that they depict and the way they weave in historical events like Kennedy's assassination. I'm definitely a fan and I have appreciated the diversion so as soon as mom finished I settled in downstairs and I've been there ever since. Therefore it has been a good day. A better day than some of the other days this week.

Tomorrow I'm going to find a place to have my functional capacity evaluation done and we'll see where that takes us. All I can do is keep waking up and doing the best I can every day and finding little treasures along the way. Like this house.... 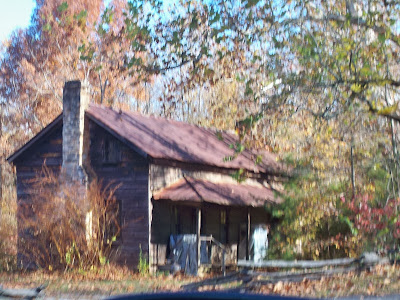 Sorry for the blurry photo. It's right before the entrance to the Nudist Resort and I didn't want anyone to think I was trying to catch pictures of nekkid people. I love old houses like this... I always want to go in and explore them. I don't believe anyone lives in this house. There's a nicer, newer house built on the same lot. I tried to strike up a conversation with the lady who owns it when I saw her posting on one of our local facebook pages but she either didn't see my comment/request or just ignored it. I can imagine that it can't be easy having nudists for neighbors.

Anyways. That was my Thursday. Hope yours was nice.