JFK, My Kid and My Kitty

Let me start by saying that I have this pair of fleece lined leggings. They are right up there with "sliced bread" in the best thing ever category. I got them from zulily.com. I would love to have a pair in every color but budget being what it is, I'm going to just reuse the heck out of this one pair all winter. Paired with a dress that hits right above the knees and a cardigan, I'm toasty and don't look like Britney before the conservator ship. As much.

It's dreary and cool here. I'm still riding the heating pad (but being very careful not to burn myself this time). I've been battling a migraine since Wednesday and it's making me even less sociable than usual (which is why there was no blog entry yesterday.)

Yesterday the kiddo and I went to Walmart to buy food for him. Most of my grocery trips are for stuff that I like or that I know my mom will eat and I don't worry so much about Austin because honestly, the kid could live on ramen noodles and scrambled eggs. So once a month we go buy a few cases of ramen noodles.

He also, lately, is really big on drinking water. My kids have always been such coke-aholics that I probably spent a full college tuition on cokes while they were living with me. For Austin, lately, it's been water. I repeat that because it's shocking. The only downfall about him and water is that if he drinks bottled water he accumulates a landfill size load of empties. If he drinks tap water, every glass in the house disappears. For the most part, over the past year, we've been keeping him stocked with styrofoam cups to preserve our glasses. The problem with styrofoam is that he eats it. I'm not kidding. It's like a nervous habit. He chews the sides of his cups. Which means he goes through cups faster than I can buy them and they're cheap at Dollar General but it still adds up. SOOOO... yesterday he asked for a big travel mug for water and I did backflips in the Walmart aisle trying to find one that he really, really loved. I did - for $2.57 - so I bought one for myself as well. Since the only source of water downstairs is the bathroom, I make several trips up and down the stairs for refreshments. A big ole jug eliminates a lot of painful stair climbing. It's amazing how something so cheap can change your life! We filled our cups up and headed downstairs and he said, "we should have gotten one for Mawmaw!". Awwww.

Sometimes Austin's compassion amazes me. He doesn't always have appropriate responses for emotional situations so when he does, it is especially heart warming. When I told him that Tommy the Cat had died his first response was, "How is Cody?"  It was a Helen Keller "water" moment. To recognize that his brother would be hurt because of the loss of an animal... very sweet. He has also talked about making a marker for Lily the dog for when she inevitably passes. He has always had a real love for animals, even though he sometimes plays a little too rough for my taste. Little Kitty is fascinated with him. Kitty will sometimes run away from Austin and other times he will circle around him waiting for him to acknowledge Kitty. If Austin ignores him, Little Kitty will meow. This is a cat who is mostly always silent and the rare times that he meows, it's a soft, gentle, barely audible sound. He CAN meow loudly, I've heard him a few times. He just doesn't. He's far too dignified for screeching like a yard cat. 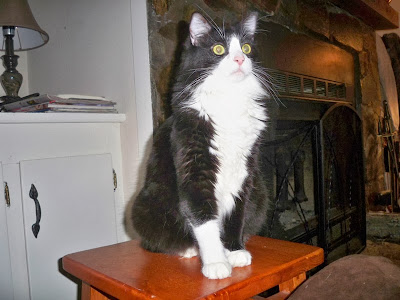 Yesterday, just out of the blue, Austin came upstairs, loaded the dishwasher, wiped down the counters and mopped the kitchen. I cast a wary eye as did Little Kitty... Have I mentioned the Little Kitty is terribly OCD? Any time something is out of place or something unusual happens he gets this look on his face. It's like he's saying, "Ssssssomething unusssssssual is happppppening here.... " Whether it's me not coming downstairs once it gets dark... or me not getting out of bed once the sun comes up... around here the "C" in OCD stands for cat.

Austin asked if he could use some of his food stamp money to buy food for a friend and his pregnant girlfriend. They've moved into their own place and his car broke down and he couldn't get to work so he got fired. He's working again but still in the hole. It's hard... because I don't want to be selfish and oh-my-goodness how touched am I that he is compassionate toward others? Of course, OUR only income right now is our food stamps and they really don't provide all we need. I told him it was ok for him to use some, just not all of his money. There's a lot more to the story... this girl gets food stamps under her mom and mom isn't giving the money or food to the daughter but for some reason the girl can't report her. It's more drama than I wanted to think about. I've always believed that giving is as much a gift and a blessing for the giver as the receiver and I want his heart to stay tender toward others. It's like the Christmas that Logan got one big thing early, before Christmas and wasn't going to have anything to open on Christmas morning so Austin asked if I would use some of the money for his Christmas to buy some things for Logan. Never mind that what I was able to spend on Austin was very, very, not much. So that's what we did. I'd love for Austin to be in school or on a career path and he makes a lot of choices that I disagree with but his heart is pure gold. Gold, I'm tellin' ya.

I like to believe that his kindness was learned by my example but I think it's just as likely that it's by the example of the people who have shown us so much kindness during Austin's lifetime. He has no memories of being in a two parent, two earner home. He has no memories of being in any financially stable situation. Even when we lived in Florida, our lives were anything but stable. Everything BUT stable. And then I moved here and struggled so much to stay afloat and we missed out on child support so often. That kid knows what it's like to try to eat for a week on $20. We've done it. And he also knows - because I always tell him - all the times that people have been generous and thoughtful toward us. It has definitely shaped his character.

I've been watching a lot of documentaries about the Kennedys this week. Due to the 50th anniversary of the assassination there is a ton of stuff out there. Oddly, yesterday I was watching a Frontline piece on Lee Harvey Oswald. Austin was upstairs making ramen noodles and he listened in for a few minutes. He said, "who was this guy?" He had no idea. I was born five years after the Kennedy assassination but it feels like I've always known the story. We had a series of books, "Meet the President" and I probably read that at 6 or 7. My love of history started early as did my love of reading.

I've been reading a blog about King Edward II this week. He is my 21st Great-Grandfather through the Gant line. I think I remember that we're also related through someone in my mom's line. I've been working for hours today trying to get those branches straight. It is believed that Edward was bisexual and had very involved relationships with two men. (Maybe those branches aren't so straight AFTER ALL...) Things like this make history more interesting to me. It makes my ancestors more than just names on a page.

Anyways... that's life for today. Sloppy joes for lunch. A clean kitchen. A good documentary or two on tv. Life goes on. Hope you guys have a happy weekend! Love and hugs!