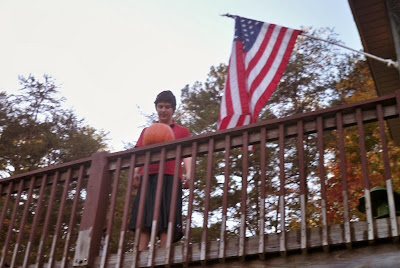 I woke up at 3:37 this morning and haven't been back to sleep therefore I'm a bit foggy and a lot slap happy. This may explain why I was delighted to take thirty-eleven pictures of my kid destroying the pumpkin that never got carved. I did my part - I paid the $4.48 at Walmart for it. He wanted to carve it and never got around to it. So when he asked if he could toss it off the deck it seemed like a decent return for my investment. I agreed that he could drop it off the deck if he agreed to pick up all the pieces. And let me take pictures because blog material is kinda scarce on days like today. It really was funny. 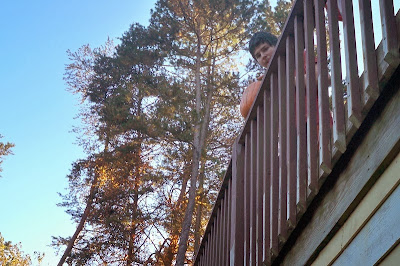 In other news... we relocated all cat related items to the Whine Cellar aka "the kitty cats' house"... so now they are taking their meals on my kitchen table which is not used for eating since we don't actually have a kitchen here. Yet. Once Uncle Sam takes pity on me and I get paid my chunka-disability going back to the last time I was able to work full-time (thinking positive here) then I'll be able to put my little kitchenette in down here. A former spouse once claimed that I could live in a hotel room and be perfectly happy as long as I had a coffee pot, a mini-fridge and a microwave. Since I've kicked the caffeine habit, I only need a mini-fridge and a microwave and I'll be set. I mean, ideally I'd like to have a counter and a sink but I could make do. 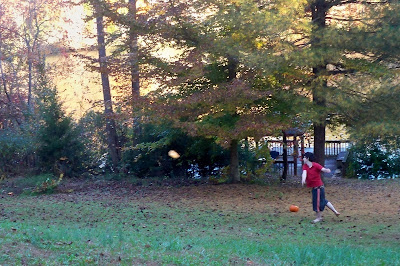 Anyways... one of the cats (Eddie) kept leaving a little deposit beside the litter box on the top floor so my mom moved that litter box to be right beside the other litter box in what will one day be my kitchen. I'd really prefer all litter boxes be on the top floor, which is essentially not being used other than for my dressing room. I figure, why be any closer to poop than you have to? But mom thinks that this will stop the unauthorized dumping so ... we'll see. I love cats but don't enjoy co-existing with the litter. If I ever have another cat he will be potty trained. If I can teach Austin to go, I can teach anyone. Anything. Oh, whatever. The boxes are cleaned out almost every day so they don't REALLY smell that bad unless one of the older cats (Stubby, Eddie) have just gone. Why am I talking about poop? 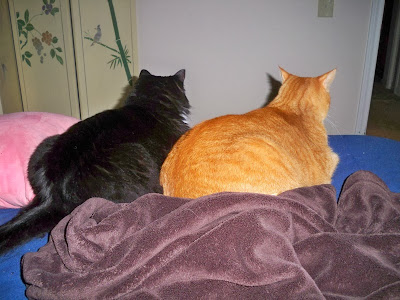 Back to the kitchen... as it stands now, every morning I gather my "must haves" and make a pilgrimage to the living room upstairs for the day of tv watching and dog cuddling and dog watering and dog potty breaks and watching Mawmaw nap. I go to the top floor where my clothes and toiletries are stored and design a costume for the day (today I'm playing the role of a color blind homeless woman) and then settle into Pop's recliner until I can no longer handle being sociable. Then I gather my things and head downstairs. Sometimes to my little living room and sometimes straight to the big cozy bed.... where the cats are usually waiting for me. Once my big old - too big to fit in anything other than a UHaul - television is finally brought up here and we have satellite on it, I will be spending more time in the Whine Cellar and less time upstairs. And when I no longer need to go upstairs to obtain a chilled beverage, I will be as close to a hermit as I can possibly be. Ultimately, the truth is that being sociable takes a lot out of me. I'm in a lot more pain than I verbally say (although I say it here quite a bit, don't I?) because it's simply redundant (as you can tell by how often I mention it here) and when you're in pain your filters don't work well and you don't always respond in the way that you would if you weren't distracted and already literally at your wit's end. The Whine Cellar is a good place to... well, whine. 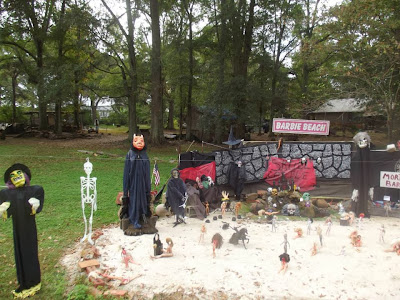 In other news... this Barbie Beach thing kept popping up in my Facebook feed. It's in Turin, which is a little town south of Atlanta where my cousin Christie lives. (There's always a cousin connection with me, isn't there?) For those of you who are Walking Dead fans, it's near Senoia which is where TWD is filmed. The story goes something like this:  7 years ago there was a driveway leading to the owner's house. No longer wanting a direct drive they built an old fashioned wooden gate. They planted wild roses, not knowing they posed a threat to the utility lines. The roses were "agent oranged" and an ugly bare spot was left behind. The USA women's beach volleyball team won the gold medal at the Turin Olympics in 2006 (not the same Turin, just in case that isn't clear). To honor them they brought in sand, made a volleyball net and bought six Barbies who were naked at the time. A printout of the Olympic rings laminated and Turin 2006 on an old tshirt was put out there and Barbie Beach was born.    There's a Barbie Beach Facebook page if you'd like to see more photos. It's one of those bizarre things that can only happen in the rural South where we don't hide our crazy people - we put them out on the front porch for the whole world to see. 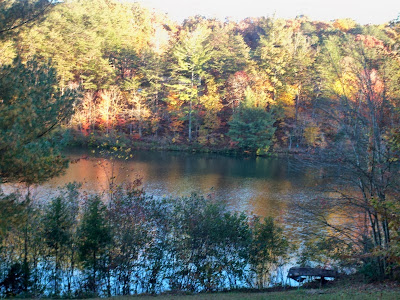 I noticed the other day while I was holding Little Kitty in the window - there's a game we play where I hold him up on my shoulder like I'm burping a baby and he looks out the window and I name all the things we can see out the window like birds and squirrels and so forth - trust me, he enjoys it - anyways - we were looking out the window and I noticed a swarm of ladybugs outside. Later that day while I was walking the dishwasher repairman out, I noticed that ladybugs were clumped all over the screened porch. We discussed how odd it was but I hadn't thought anything else of it. Well, as it turns out, if ladybugs are trying to get indoors it's a sign of a cold Winter ahead. I'm dying for one or two good snows here. I know you're sick of Autumn lake pictures and I would love to get a few Wintry weather photos. Maybe, just maybe, the weather will be favorable. It was warm enough last night that I left my bedroom window open but it already seems too cool tonight for that. Cold damp weather really stinks with arthritis but heck, it's not like I'm exactly dancing a jig otherwise. I might as well get a change of scenery.

I am officially out of things to share so that will have to be it for today. Happy weekend, y'all.