I just realized that today is the last day of November. I have to say, I'm glad to see this month go and HAPPY HAPPY HAPPY to see December arrive! 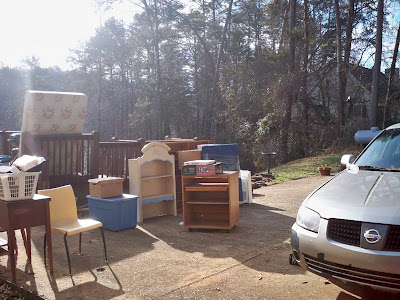 Today was part 2,174 of the big move to Cedar Hollow. Up to this point we've moved in the stuff from my storage place (last August) moved in stuff from Grandma's house (in two parts) and slowly, over the course of the past fifteen months, brought carload after carload up here. Yesterday Pop got a UHaul. My boys and my brother and my mom and dad and I don't know who all else got it loaded and my brother drove it up here yesterday afternoon. This morning our "unloading crew" came and got everything off the truck and into the house.

Since I stopped working at the beginning of May, I've been here at the mountain house almost constantly... but my TV and my favorite chair... have not been. I have this big old tv that I "inherited" in my last divorce that is too big to fit in any of the cars we have. It's out of date, it's bulky and heavy and it's not HD but it's mine and it works fine. Up until last Christmas we didn't have tv here at all and then my parents got a nice one as a Christmas gift. Last April we added satellite so we could use the tv for more than watching dvds. But ALLLLLL this time I've been without a tv in the Whine Cellar and tomorrow that comes to an end. The tv was Uhauled up last night and unloaded this morning and tomorrow (yes, on a Sunday) the DISH guy will be here to hook it up! I will have broadcast tv in my Whine Cellar! And as my dad says, they'll never see me again. Now I don't have to drag my laptop and my sippy cup and my chapstick and camera and whatever else I'm going to need during the day upstairs to set up camp in the living room. Now I can just use MY living room and hang out in my own little nest! 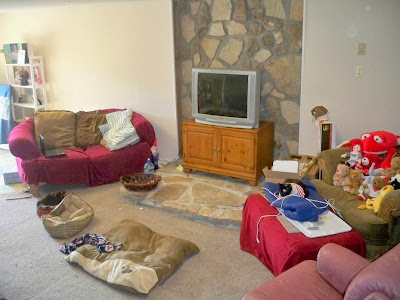 Moving the recliner and the tv/tv stand into my living room makes it feel so much more like my home. They also moved up my dressing table that I've had since I was 7 so my bedroom feels more like my own bedroom.

(animal beds all over the place because I kept the zoo down here in the basement so that they wouldn't get underfoot or escape through an open door).

There's a lot to be done around here. I keep telling my mom that she's got the rest of her life to unpack but it will be nice to get things tidied up so we can decorate for Christmas. I've got a stack of gifts that need to be wrapped (can't find the wrapping paper that I KNOW we have leftover from last year and I refuse to buy more when I know it's here somewhere!) and no, I haven't addressed the first card yet... even when you don't have to do anything, there's always so much to do! 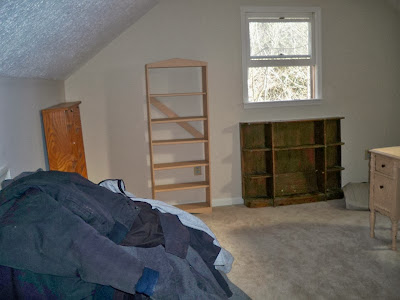 We also now have two more bedrooms furnished so we have actual beds for people to sleep on instead of air mattresses! One of the top floor bedrooms is set up as a library and the other is set up as a guest room but both have beds. And now that I have my dressing table here I can move all my glam stuff from the upstairs bathroom to my bedroom. And if I could get my hands on a couple dozen coat hangars I could move my clothes back down here too...

We were able to feed the moving crew with Thanksgiving leftovers and my leftover potato soup from last week. And my yummy poundcake. It was chilly but otherwise a good time of year to move, I think. Not that I actually moved anything, but in theory. I tried to take a few pictures of the moving crew but it seems that I mostly got pictures of people standing around. 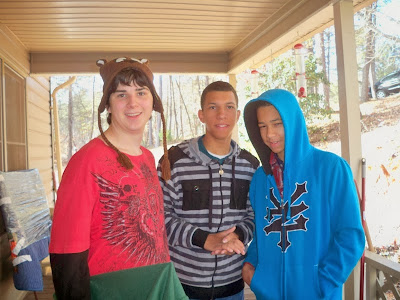 Austin with his new Scooby Doo hat, my nephews Cory and Matthew. 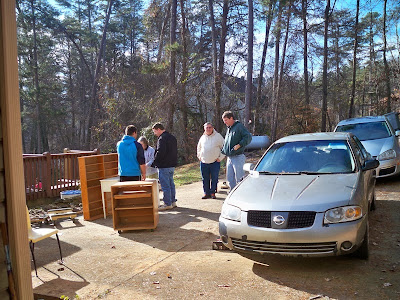 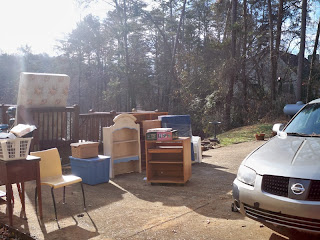 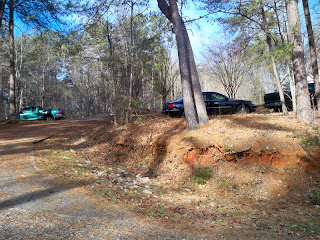 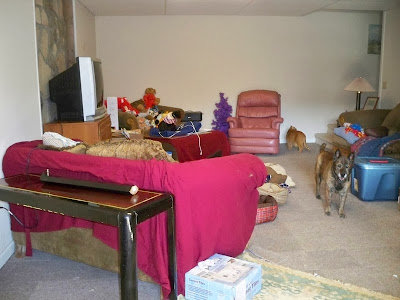 Other view of my living room. We desperately need to hang pictures on the walls. 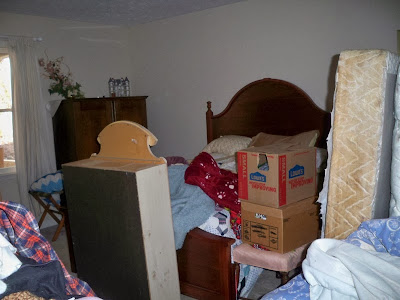 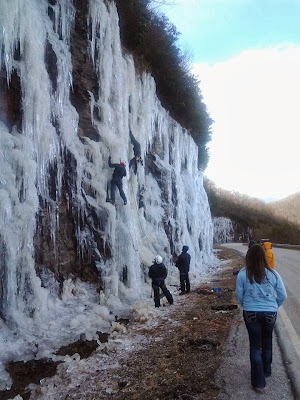 To show how cold it has been... I snagged these pictures off my friend Angie's facebook. This is Richard Russell Parkway - just a little bit North of us. 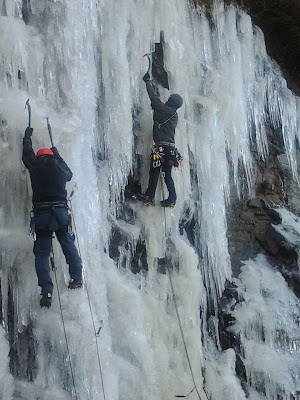 So that was my Saturday! I didn't watch any football today. I'm so unhappy with the way the Gators have played this season... I just couldn't watch... they ended up not getting beaten as  badly as I expected so that was good. I've had more of that evil gut pain. I'm ready for that to be resolved. One day I'm going to get fed up with it and just throw myself on the mercy of the closest ER but I keep thinking of trying to pay off that bill with no income and it makes my head hurt worse than my gut. Things have a way of working themselves out. I moved back to Riverdale a year and a half ago, heartbroken to leave this area, heartbroken to leave my kid behind. Here we are... just a short while later... and I'm back here with my kid in a place that was better than anything I ever imagined and we've made it through seven months of me not working, even with paying all of my own medical bills out of pocket. Now I get all that plus satellite TV!

Happy December, y'all! Things are going to get better for all of us this month, I'm sure of it! Love and hugs!