Linking up with Kendra at Catholic All Year for Answer Me This because my list of things to mention in my next blog entry is looking pretty anemic and I'll jump on any writing prompts. Hope you are entertained.

The way this is SUPPOSED to work is that you link to your own blog and answer the questions there but the large majority of my blog readers are not bloggers themselves. I hear that blogs are no longer in vogue but ... I still have a "dumb" phone so apparently, keeping up with technology is not high on my priority list. If you feel moved to join in the conversation feel free to respond via Facebook or in comments or email me. I love all methods of feedback. Anything to prove that you're not my imaginary friends and really do read here.

I'm answering two sets of questions because... who doesn't like seconds?

In some ways, bless my dad's heart. She and I have many of the same physical issues which makes us alike in many ways... we rarely feel good two days in a row and we rarely feel good at the same time. I think personality wise I've always been a bit more like my dad - same lame jokes, never met a stranger extrovert kind of way. Pain makes you an unintentional introvert because it's hard to get out and be among "the people" and when you are out and about you are often uncomfortable so it's hard to be outgoing and engaging.

I've mostly eliminated coffee from my routine except in rare occasions. I'm a big fan of iced tea and in cool weather I love hot tea. I start with two tea bags and just refill with water all day so by the end of the day it's mostly hot water but that's ok. Tea wise I prefer mint teas because the flavor lingers longer.

Italy, first for the food and secondly for the history. England first for the history and maybe a tiny bit for the food (fish and chips?). I've been reading a lot of travel blogs lately and they make me want to visit France where as in the past I've been kind of meh on all things French. I'm fascinated with other cultures but not particularly adventurous when it comes to weird meats. I'll eat pretty much any fruit or vegetable ONCE but when it comes to consuming unknown protein sources notsomuch. This makes me less interested in visiting Asian countries than Europe. Although they eat some pretty questionable parts in Europe too.

If you're looking for a good travel blog to read I like Ott's World and Rick Steve's website. You kind of have to dig to find the travel blogs on Rick's website but they're worth it - really great recaps of his tours made by people on the tour.

I cry at milestones, crossroads, life changing moments... I always refer back to Ryan's first preschool performance where I was holding the huge videocamera to record the event and was sobbing so much that the video wiggles with every deep breath. I cry whenever I see reunions. I prefer to cry in private because I don't cry pretty - red face, snot and all that.

5. How often do you wear heels? 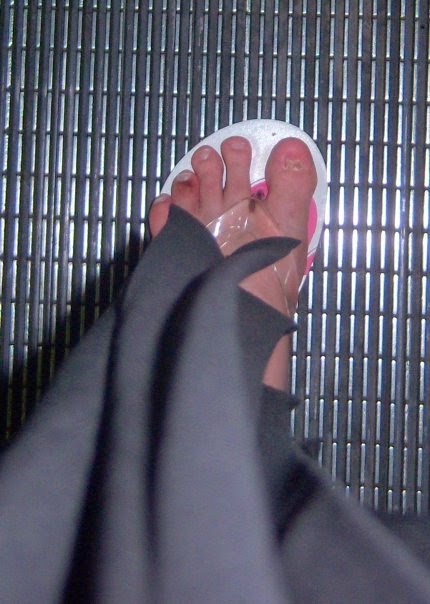 I hate heels so much that not only do I not wear them - I don't think anyone else should wear them. I am overly concerned when I'm out and about with my daughter-in-law when she is wearing heels. I'm just certain that her feet must hurt. The moment that broke me from heels forever was when I was in Vegas for my wedding. We were walking late at night in the old part of Vegas and my feet hurt so bad that I stopped at a street vendor and bought a pair of flipflops.  $140 cocktail dress - $2 flip flops - I'm just THAT classy. For the most part now I wear crocs or my mary jane sketchers or flip flops. Anything that makes my feet happy.

I played the flute (badly) in band in 5th, 6th and 7th grade. I was really bad. Once I got demoted to the lowest level band, I gave it up. I've always wanted to play the piano because it is one of those life skills that makes you valuable at parties and gatherings. Since I rarely go to parties or gatherings I don't imagine it matters so much any more.


1. What's for dinner?
I had an elaborate food post on Friday so you kinda already know what's for dinner. That's mostly what I've been eating this weekend. Evil gut pain returned today so I imagine I will be eating that which pains me least to make for the rest of the day.

2. What's the last thing you borrowed from someone?
I try not to borrow things because I'm the world's worst at returning them. I mean, the worst. If you lend me something you might as well be giving it to me. With that in mind, I never lend anything - I give it away. If I have something that someone else can use, I'm happy to share. If it comes back, that's ok too.

Right now I'm sleeping in a bed that came from my Grandmother's house and was intended to be passed down to my cousin Michelle but they haven't been able to arrange transport for it. When things got damp around here last Summer Austin's bed was ruined and I gave him mine so I'm sleeping in Michelle's bed (which is really going to go to her daughter McKenzie) for the time being. That's my biggest borrowed thing, I suppose.

3. What is your favorite prayer?
I'm not Catholic, although I do love my Catholic mommy blogs. We Baptists tend to improv our prayers. I will say that in my darkest hours when I don't have words to express, I like knowing that simply saying the name of Jesus is all I need. I believe that the Holy Spirit interprets our groans and makes sense of that which we can't articulate.

4. What is the oldest thing in your house?
Besides my parents? *snicker*
We have several antiques here that came from my Grandmother and Great-Grandmother but I don't know the exact ages of any of them.

5. What's the best concert you ever attended?
I haven't really been to many. When I was a teenager I was a groupie for the band that played at Six Flags. I had a seasons pass and we went to Six Flags several times a week to hang out with the band - they were called Rare Breed.

I went to the Madonna "Like A Virgin" concert in 1985 with a group of friends. We rode in a limo and thought we were something special.

There was one concert at Six Flags - on the big stage - that a group of us went to see. It was open seating and they had the crowd line up to enter the arena at a certain place in the park. When they opened the gates there was a stampede and one of our friends got knocked to the ground and we were pushed past her. A big guy picked her up and carried her out of the crowd. It was before the days of cellphones so it took us several hours to find her and find out that she was ok. That was probably the defining moment of me NOT liking crowds. Another concert at Six Flags - Michael W. Smith, a Christian artist, we were in the third row near a big speaker. I couldn't hear for days afterward - which began my hatred for loud music. So... me and concerts... not always the best of times.

6. Do you have a nickname?
My name doesn't really shorten well. I don't really have a nickname which is odd because I'm always nicknaming other people and animals and things. I think the closest thing I have to a nickname is Mom, Mommy, Aunt Heather and sometimes Sis. My kids are Boo, Codes, and Doodle Bug/Augie. They've NEVER been called by their given names!

Hope this was more entertaining for you than my recap of the various aches and pains of the weekend would have been! Happy Sunday! Love and hugs!

Yes, happy feet make a happy person. I love the title of your blog. Although I thought it was referring to when Mammy is tightening and measuring Scarlett's waist after she had Bonnie. I am pretty sure the same idea applies.

The concert at Six Flags with the mad rush-was that Night Ranger? I was at that one and was SO SCARED!