Nothing To Talk About 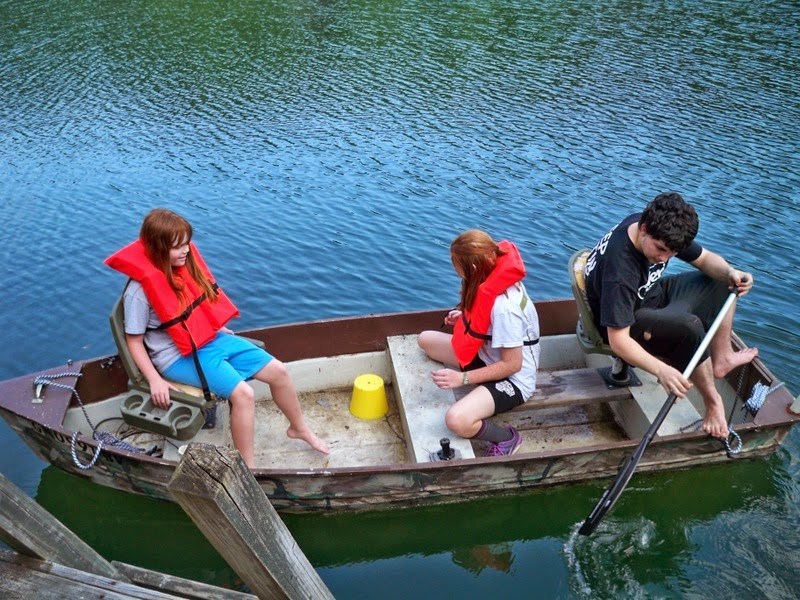 I don't have anything exciting to blog about so I thought I'd share a few photos. I posted these on Facebook already but some of my blog readers aren't on Facebook (and some of my Facebook friends don't read my blog). I was in a pretty pickle yesterday with pain but I didn't want to miss my nieces' first boat ride in Granddaddy Pennington's fishing boat. Granddaddy would have loved those girls... he died when I was ten so (of course) my memories are limited but most of my memories are of him being outdoors. Even after he was diagnosed with brain cancer and they had moved into a little apartment, he would sit out on the back porch and grin at me turning cartwheels in the yard. I've got to think he would have loved the crazy antics of these adventurous redheads. I know they keep me amused!

A few more photos from the lake yesterday: 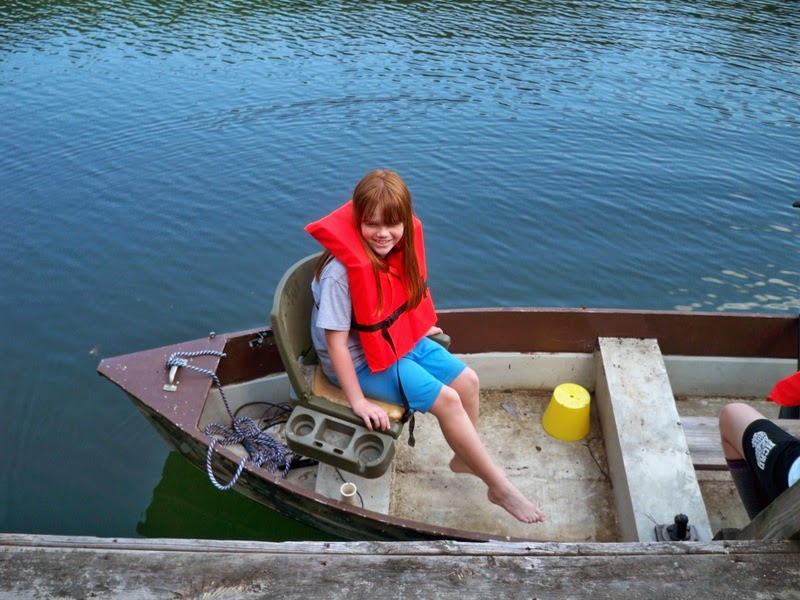 This girl LOVED the boat. Sarabeth wasn't a fan. I think something about putting her life in crazy Cousin Auggie's hands... but Jamie would have stayed out there until dark. 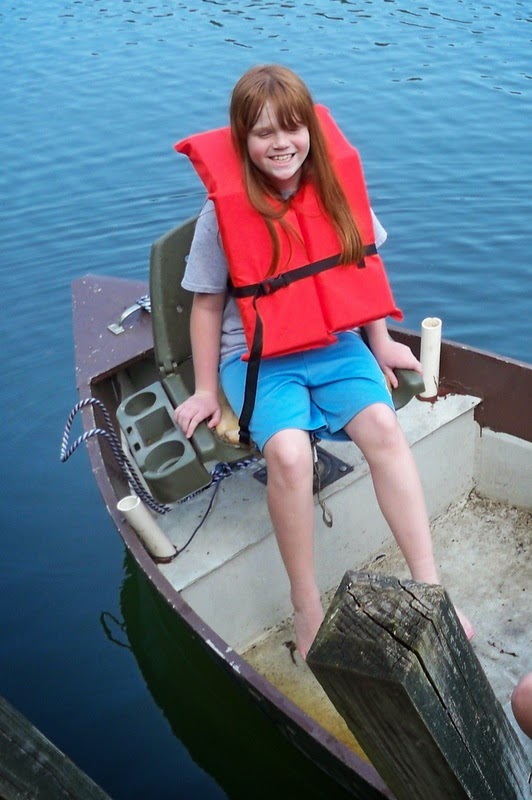 that grin... I love that grin! 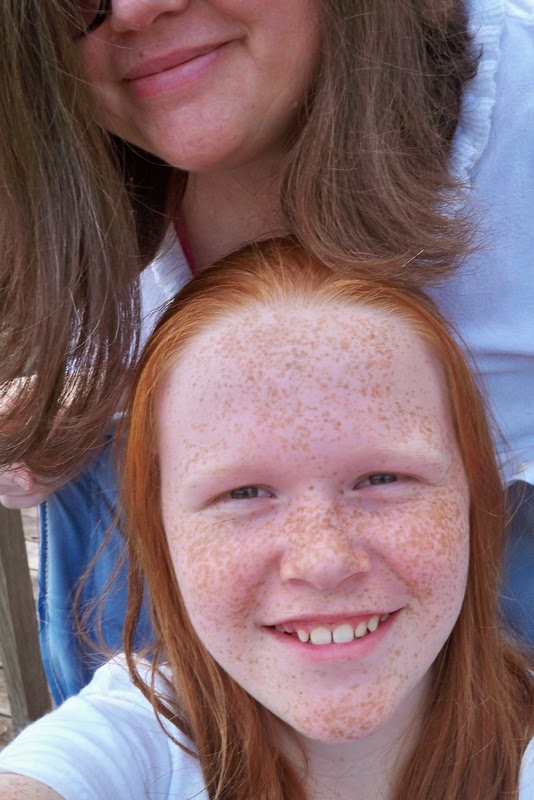 Selfies with Sarabeth on the dock - that awkward moment when your 11 year old niece has to hold the camera when you take selfies together because her arms are longer... check out the reflection in my sunglasses of her long arms! 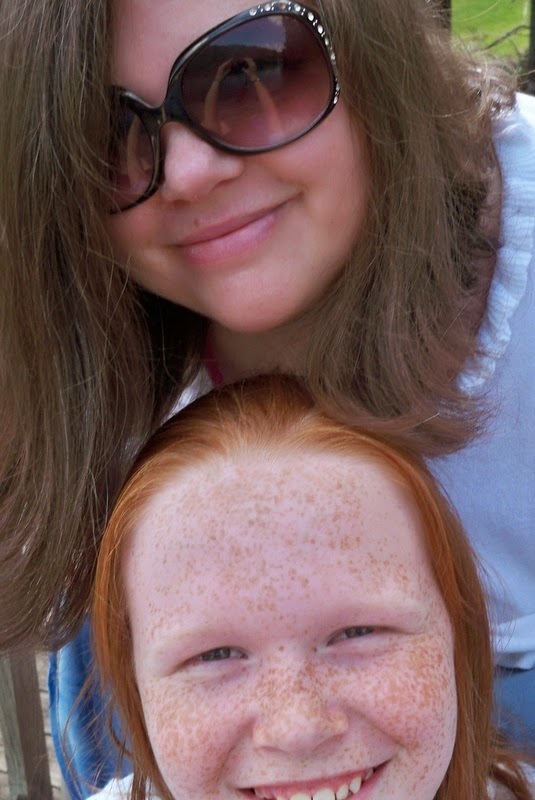 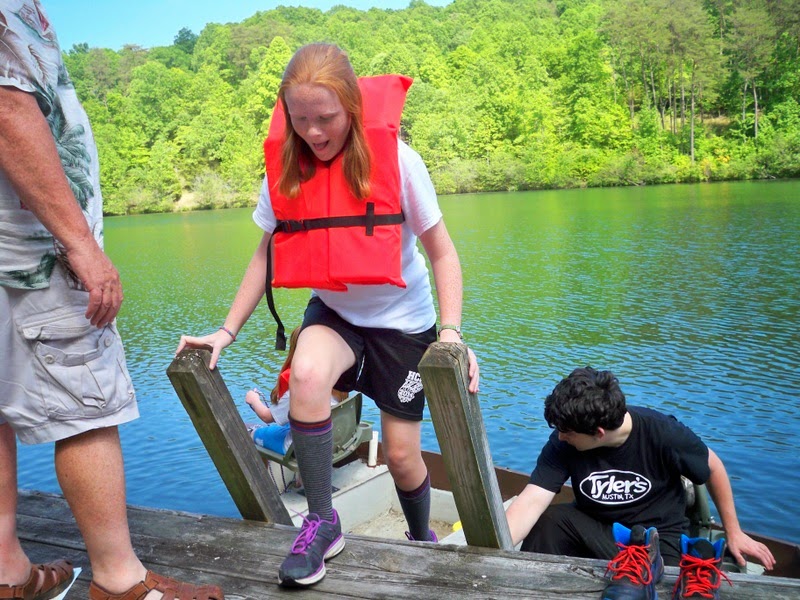 Sarabeth bailing on the boat ride


All of a sudden I'm having trouble going to sleep at night. I've been up past 2am the past two nights. I still wake up around the same time (thank you, Little Kitty) so I've been sort of groggy during the day. It's just about impossible for me to nap during the day because inevitably about the time I doze off there's some sort of activity here in the Whine Cellar that wakes me up. Being woke up from a nap is much worse than not taking one at all. Part of it is pain related as I'm having a hard time getting comfortable. Part of it is my highly animated roommate who hits his stride around 11pm and wants to chat. I try not to be unsociable too much. His Basement Clown Posse has moved on to parenting and other adult roles and he's feeling a little lonely. He's also mostly enjoyable and I don't want to miss this time with him. He might leave some day and I would miss him.

I'm not doing as well with food this week. The whole "big meal in the middle of the day" hasn't matched up with life. I'm still trying to pick healthier food choices... snacking on peanuts instead of pringles, chocolate covered strawberries instead of Little Debbies... and I still find myself unable to eat huge portions. I want more food than I can comfortably eat and more often than not, I stop eating before I get full. That's progress.

Today I tripped over the garden hose while going out to get an ice cream for a snack. Eating poorly can hurt you in more ways than one. I didn't hit the ground but I had a big jolt which is never good. 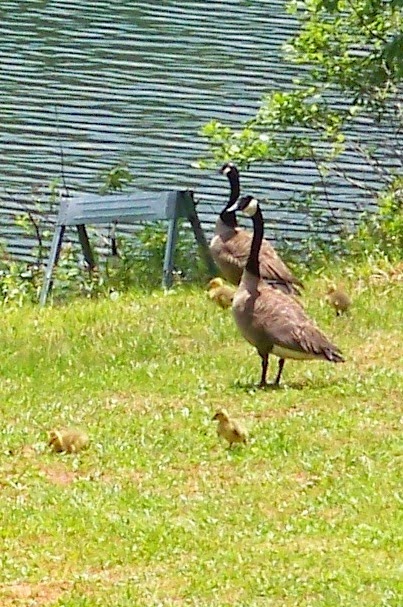 Mother Goose and Father Goose have been MIA for the past week or two. They came back today with five little goslings! I couldn't get very close and my camera doesn't really have any sort of telephoto close up magic but you can see the beebies in the grass.

In other wildlife news... there was a cute little bunny sitting right beside the garden when I got up this morning. I always pick Little Kitty up and hold him where he can see out the window in the morning. When I said, "do you see the bunny rabbit?" He purred like it was his job. I don't know if he thought it was a friend or thought Mr. Bunny would taste good or what but he was sure glad to see it. We finally got Little Kitty to allow us to put the harness on him and tried walking him on the leash. He didn't quite get the hang of it... he just wanted to sit, like it paralyzed him.

The windows downstairs have a very narrow windowsill, too narrow for him to sit. He goes through all kind of crazy maneuvers trying to see out. Of course... he could just go stand at the sliding glass door and see the whole wide world...  but I guess the windows offer a better vantage point. 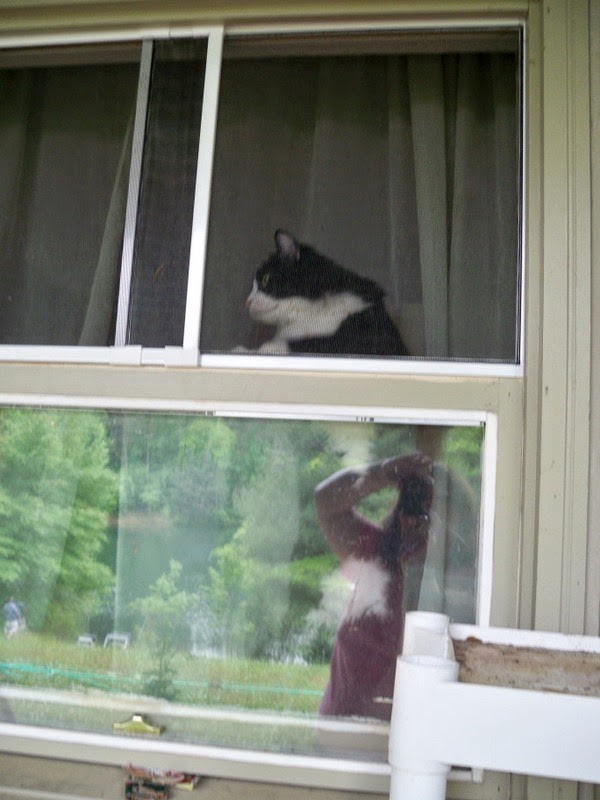 Kitty standing on his hind legs in the window so he doesn't miss anything... he's got some sturdy hind legs. He could walk upright if he really wanted to. 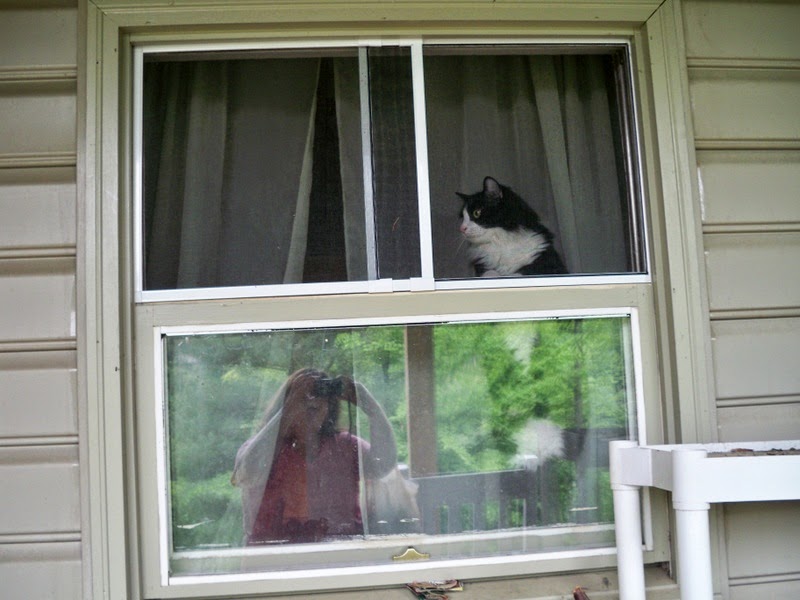 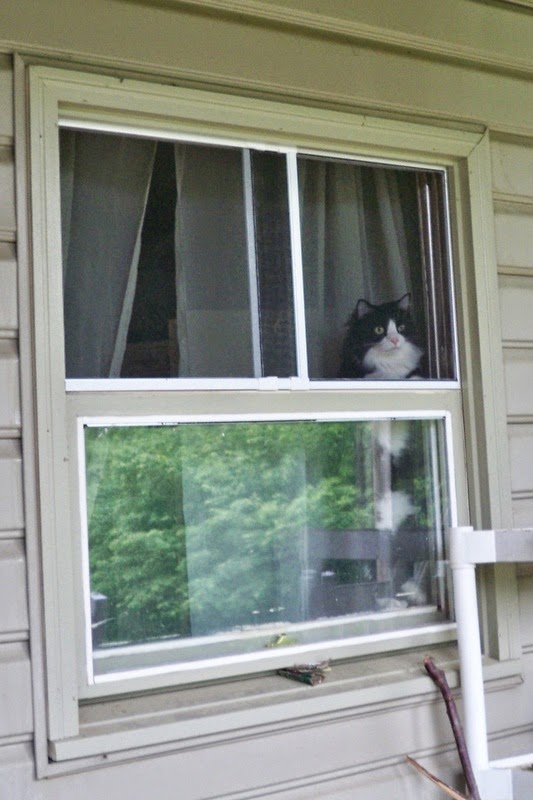 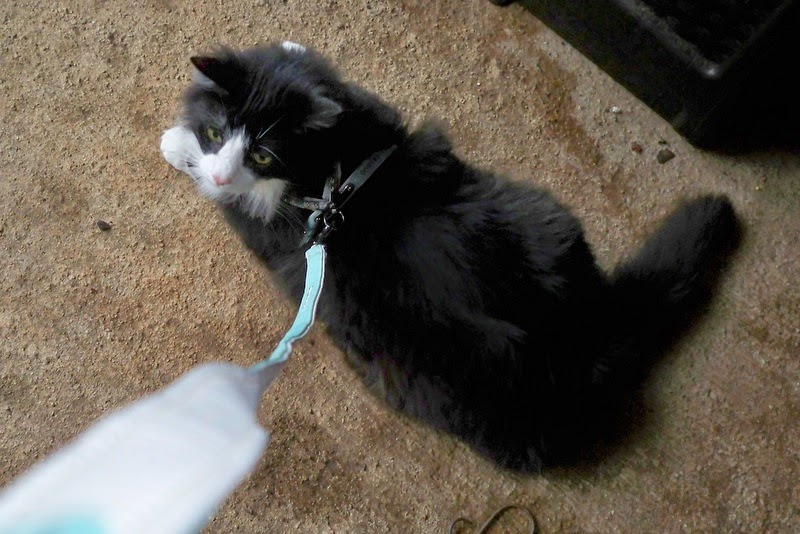 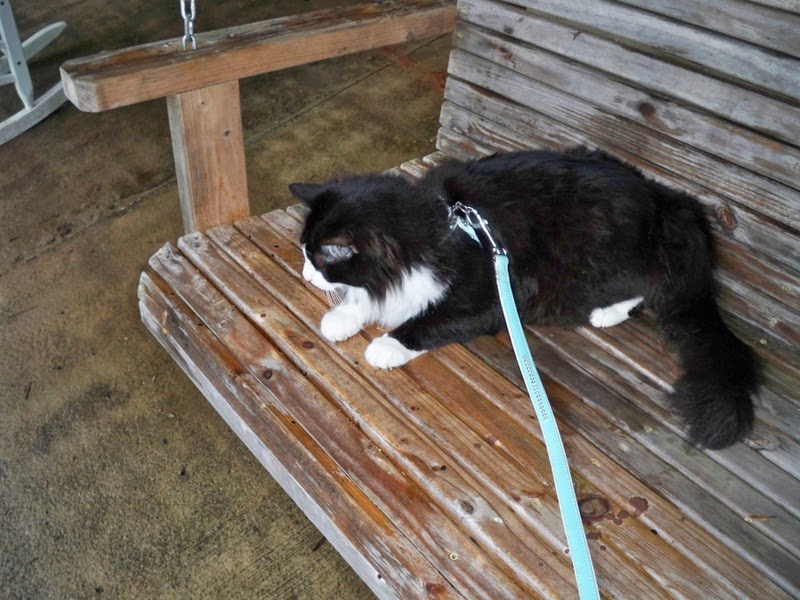 "walking" on a leash 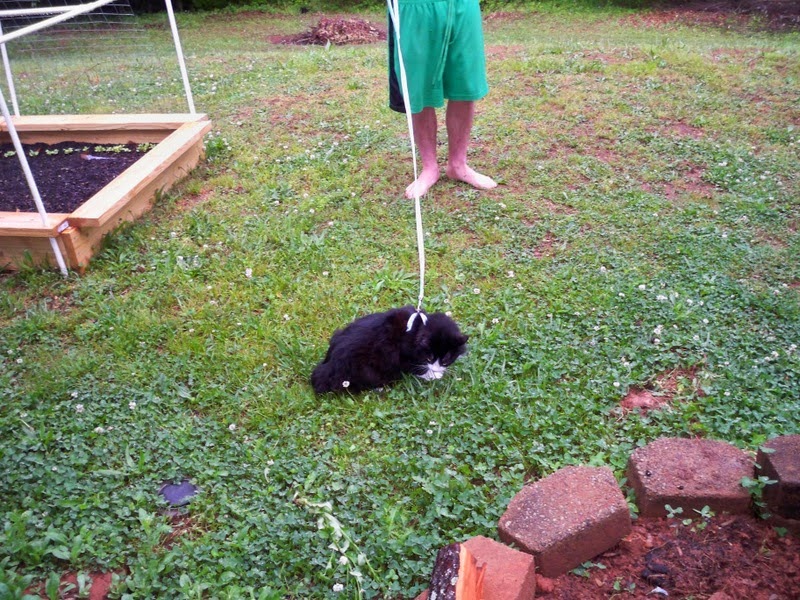 I was really stressed out watching Dancing With The Stars last night because it looked like Maks and Meryl were going home which is RIDICULOUS because she is the best one on there. My sentimental favorite is Candace Cameron Bure but let's face it... she's no Meryl. She has white girl hips... they don't lie. Tuesday night TV includes the Duggars, the Little Couple and their adorable adoptees and Tori and Dean's train wreck. Maybe it's the tv watching that's giving me insomnia this week. Not sure.

I downloaded a kakuro app on my Nook today. Kakuro is sort of a crossword puzzle with numbers. You're given the total and you have to figure up the digits that make up that sum. Digits can't be repeated in the same line. So if you have 3 as your sum with two blocks beside it, you know your digits are 2 and 1 and you just have to figure out which goes where. I've mastered sudoku so well that it was time for a change. Have to have something to keep my mind stimulated with all the reality tv I watch.

Anyways... that's all the "nothing to talk about" that I have for you today. Happy Tuesday! Love and hugs, y'all!

I want to gently and sensuously lick your rectum.

what did you do the day before the pain got intense? this is important to note and modify your schedule going forward. eating well is hard when you are tired for everyone. the cycle is too much activity, pain, unhealthy behaviors such as insomnia and food, more pain. you really must get to the root to stop this. schedule and modify. you are doing good. all is learning. god bless.