Reasons To Love Monday - We Are All Still HERE! 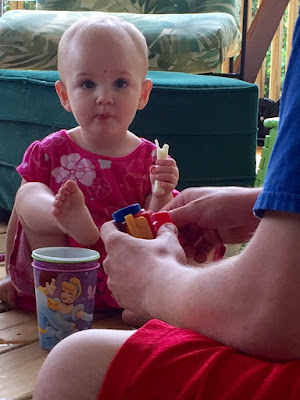 Hello Monday. Here were are again. I'm feeling really exhausted. The autoimmune issues that I have that are not entirely diagnosed yet are really making life hard today. It's like... we know it's not lupus, at least not the kind that can be determined by your blood but my joints are on fire today... and my cheeks are on fire (which is my "things are getting out of control" symptom) and I'm just so exhausted. Beyond exhausted. And I have done absolutely nothing to warrant such exhaustion. Cosette came over for an hour or so last night and I did hold her for just a few minutes but the ick I feel is beyond baby fatigue.

BUT DESPITE the fact that it's Monday and I feel incredibly miserable today... there are still so many reasons to love Monday. Let's give it a shot: 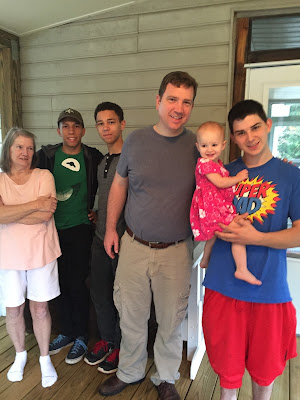 1. We had company yesterday (still have company today) - my cousin Kevin and his family stopped by yesterday afternoon. My brother Michael and his boys came down (over?) from Chattanooga and spent the night. And, as I previously mentioned, Cosy came for a little while. People have been checking in on my mom and that's really sweet. I almost love drop in company more than planned for company because if my mom knows people are coming she will wear herself out getting the house "company ready". I keep telling her people are coming to see her, not to judge whether or not her house is clean... but, what can you do?

2. The bonus time with Cosy was great fun! She had a bit of a Nana attachment at first and then moved on to a Mawmaw attachment and then was a full on Daddy's girl. Mostly, she wanted to pet the kitties and the Holy Grail of cat petting for her is Little Kitty who is entirely TOO FAST for her to catch most of the time. It's the sweetest thing ever watching her call the cats by clicking her tongue (like me) and patting the side of her leg (like Mawmaw). We were playing on the new porch (because honestly, it's the best playpen EVER) which is Oscar's (the dachshund's) favorite place in the house. Every time Mawmaw would go in to get something, she would leave Oscar and Cosy would get concerned and say, "Ooof?" as in, "you forgot your dog". Cutest ever. Also, I had pour water into a cup for her and splashed it on her toes on Thursday and she wanted to do the same thing last night, even though she is not as much of a fish as Oliver. It cracks me up - the things she remembers from week to week. So... starting off the week with happy Cosy memories is the best. 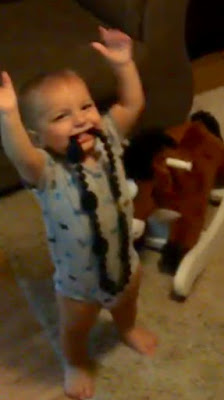 3. Speaking of the cutest kids ever... Oliver learned how to signal "touchdown" this weekend. He already knew how to do the tomahawk chop - since his dad is a big Florida State fan. Unfortunately they didn't have the opportunity to celebrate many touchdowns this weekend as FSU suffered probably their worst loss ever. It was painful to watch.

4. Despite feeling icky... I am so grateful that this is a "no demands" day for me. I don't have anyone to pick up from work (I don't think). No doctor's appointments. No dog-sitting. I had lunch plans that I postponed because... not moving. It's really quiet and peaceful here, even with company. My nephews are 19 and 17 and probably the quietest teenage boys on the planet. They're doing their own thing and I'm down here in the nest just resting.

5. We're having more company this weekend because my parents birthdays both fall in the next week. My dad's birthday is Wednesday and my mom's is next Monday. Cody, Marquee and Oliver are coming up, Cosette is coming over, my brother and sister-in-law are coming and... if you're local and want to come by, just come on over! Let me know if you need directions... we're going to have a very informal gathering around noonish. Bring a snack if you like. I'm sure we'll have some kind of food although we're not that organized at this point. If you're not local... the leaves are *just barely* beginning to turn colors and it's beautiful up here lately.  It's a great time of year for a day trip! I think there's rain in the forecast for Saturday but... we have the big covered porches to hide out in and still enjoy the cooler weather.

6. My Little Kitty has been glued to my hip today. I think he knows when I'm not doing good because those are the times that he is very possessive. Or it could just be that he's a cat and they think they own the world.

7. I'm drinking a big glass of my favorite peach tea. Even though Pumpkin Spice is available... after getting sick off the very first one I haven't had as much of a desire for them. Also... it has to get cooler for it. I see some fifties ahead in the ten day forecast so it will be feeling autumnal very soon. Glad the PSL is there when I want it... and I'm sure I'll want some soon. In the meantime, iced tea is a big reason to love Monday.

8. My last (and biggest) Reason To Love Monday is that we're all still here today. The terrorist attacks over the weekend struck too close to "home"... not my geographical home but people I love/family members = home. My brother lives on the Upper West Side and the bombs were in Chelsea so... I didn't worry so much. It's still all too close for comfort and it's still somebody's brother that got hurt on Saturday night. However... it could have been so much worse. I'm grateful that no one was killed and I pray that those injured will have a swift recovery. I feel so very insulated here in my nest far, far off the beaten path but that doesn't mean that my heart isn't distributed to various places where bad stuff DOES happen. The truth is we are never promised more than today so waking up this morning and counting heads and realizing that all those I love are still with us... that's all the reason I need to love today! 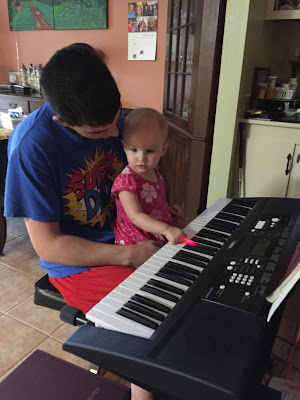 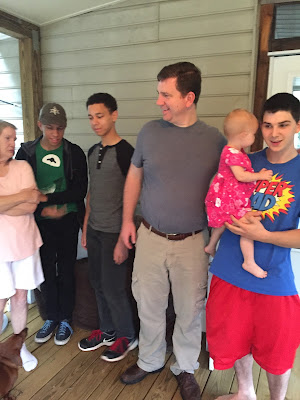 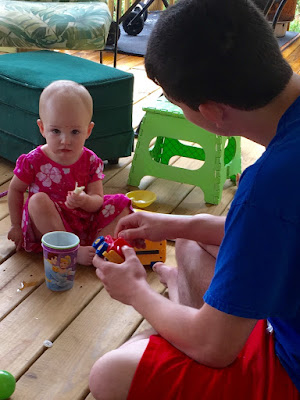 < ---- Note that Cosette has a piece of string cheese in her hand. Baby Girl loves her cheese! She was telling me in sign language that she wanted to eat so we gave her some cheese and she just carried it around munching on it until it was all gone. With both babies... they're in the stage of doing things independently now... and it's like... awwww... precious girl can eat cheese all by herself... like she's doing something miraculous. I guess it's just part of being a Nana but I'm impressed every time they do things bigger people do. She went potty again this weekend too! We're not pushing the potty training on her because she is just 16 months old still. She has always hated having a wet diaper on and she is starting to get the concept of "my pee can go in the potty" so her mom is just easing her into it. I think she will train easily. Ok. That's all.

Those two babies are just gorgeous! She is so dainty and he is full of freshness and toughness! LOL So cute!

Thank God for everyone that this guy didn't kill anyone. I'm so sick and tired of reading this ISIS crap!! Sadly it will continue.... til then we have to keep living.

Hi Heather, been a while since I commented & I lost a ton of friends on FB a while back when I went off for a bit. Anyway, I'm sorry to see you're having all of the health issues! I totally understand; I have quite a few & was DX'd w/Sjogrens Syndrome last year, which explains a ton of my Autoimmune issues; which include GI, Neuro, Joints, muscles etc. Your grandchildren are just precious! Going to friend request you on FB, if you'd kindly like to add me back. Mary Anne