Waiting For My New Computer... RTLM 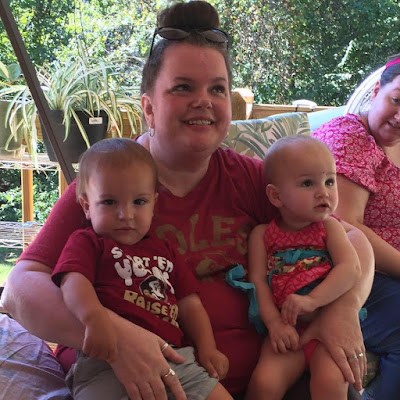 Welcome to this week's Reasons To Love Monday post!

Today is my mom's birthday! She is celebrating by going to a doctors appointment. Fun for her, right? We actually had a little family gathering on Saturday to celebrate both her and my dad (whose birthday was last week). Cody, Marquee and Oliver drove up from south of Atlanta, my brother Jim and his wife Angie and my sweet niece Jamie joined us and Tasha came over with Cosette. We feasted on chickfila nuggets, fruit, cheese and crackers, pretzels, chips and dip. Angie brought two yummy pies and Marquee made some awesome cupcakes! I posted a lot of pictures on my Facebook and... as soon as my new computer arrives I have about fifty more photos that I took on my digital camera to share. Truthfully... I only took pictures of Oliver and Cosette because I had a bad case of Nana-brain combined with a pretty nasty auto-immune flair (which you can see in some pictures because my face was flaming red). I held up until everyone went home and then have been hibernating ever since.

Today started really yucky as I just honestly am miserable. I was having major chills, coughing, sneezing, aching from head to toe. I took a few magic potions and I am feeling a little better than I started off. My only duty for the day is keeping the animals alive - RTLM! - and I am grateful. The cats are fed and Oscar is tucked in beside me in my Nest. Best purchase of my life - the extra wide recliner so that the dog can lay comfortably beside me. I have a huge comforter doubled over twice padding the seat of the chair (helps my hips) so the little doggie can lay his head on the arm of the chair for a little pillow.

My trusty laptop bit the dust on Friday. It was fine and then all of a sudden it was dead. It had a full battery and was plugged up... I got up for a few minutes and came back to nothingness. No amount of poking, prodding, turning off and on, changing batteries, changing power source can lure it out of it's darkness. It was fine and then it wasn't. That's never happened to me before. I've had that laptop approximately 3 years, it is (was) a Lenovo, the economy model and I have used it probably 12 hours a day every day since I got it. I consider that a reasonable amount of use out of it for what I paid although I would have preferred to have some notice that it was about to leave me so that I could have put some time and effort into choosing it's replacement. Ultimately... I just bought another Lenovo, the most current model, because it is inexpensive and I figured there would be less of a learning curve. I am not completely technically ignorant but I also don't consider myself that up to date, either. I don't want to have to read a manual to figure out how to get back online so I bought what I know and I hope it will be reliable. It is scheduled to arrive tomorrow. RTLM because Tuesday brings a new computer!

In the meantime I'm using a Toshiba of my mom's that I don't love. The keyboard feels different and ... I don't know. It feels like cooking in someone else's kitchen. I didn't want to download my photos on this computer which is why we will wait until I get the new one.

Someone asked about the photos on the other computer... the good news is that I'm so connected via social media that a lot of my photos, certainly the best ones, are posted on Facebook, the blog and Instagram. I use picasa - a google based program - to edit my photos and therefore can access most of my ol photos via google chrome. There are some documents that are saved that I can't access so I may take my dead computer to someone who knows how to take stuff off of the hard drive to be able to get those things back. Not the end of the world either way. 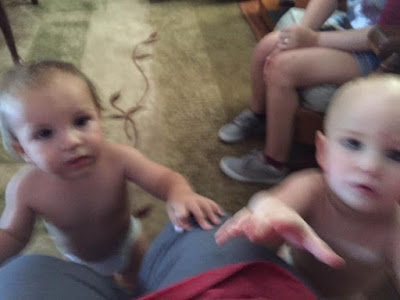 One thing I did want to share from Saturday - it was the first time that Oliver and Cosette really played together and it was so precious to watch them interact! Oliver is a little fish - he loves to get wet - so we let him play with Cosette's Hello Kitty sprinkler (that was a gift from my Cousin Kevin and his wife Tobye - thanks guys!). Cosette was afraid of the water but she was absolutely enthralled with Oliver playing in it. She clapped her hands and laughed out loud at him! He also had gotten a hold of a birthday balloon and was running around with it attached to him. Cosette would point and say, "WHOA!" They also played together on my dad's keyboard and there are a few really cute videos on my Facebook of that. Two little babies wearing just their diapers plunking away at a keyboard - honestly, if there's anything cuter in the world, I don't think I could handle it! I know as a Nana I can't guarantee that these two little cousins will always be buddies but I want to do all I can to connect them. Cousins are so important! Mine are to me, anyways. They're still so little and Oliver is so freakishly strong that we have to watch them carefully... he pulled Cosy to the ground trying to hug her on Saturday (which was really funny, even though it made Cosy cry for a minute). I got one picture of the two of them both trying to get my lemonade. It's out of focus but it's just so much of my heart... it's precious to me.

Also on Saturday (but we'll make it a RTLM because I'm only posting this now!) my brother and sister-in-law brought over my nieces' old picnic table and sandbox for Oliver and Cosette to use! They even brought brand new sand for us! It all fits nicely on my screened porch and I am thrilled to have the babies - now toddlers - use them. My living room and porch look a bit like a day care... as does the upstairs covered porch. Having babies around just brings so much life into the house. Even though it takes me a few days to recover from having them over, it's absolutely worth it.

This week I have nothing on the agenda, just my usuals plus two doctors appointments for mom. The weather is turning milder and we will have temps in the fifties for lows and the upper seventies/low eighties for highs. I'm so ready for it to be cooler! Getting hot aggravates so many things that are wrong with me. As a result I am greeting this week with wide open arms and can't wait to welcome October!

Hope you're all well and that you are finding your own Reasons To Love Monday! Love and hugs!

PS - this dog has gas and it is making my eyes water! RT NOT Love Monday! Whew!

Happy Birthday to your Mom!!! Hope her appointment went well :)

Happy Birthday Mom!
All the best to you.

The pics of the duo grandkids are wonderful.
He looks like a little tank and she looks so
delicate. Perfect.:)
Good luck with new pc. That's always exciting.
monica

Make sure you keep the cats away from the sandbox!!