Last night we had a great time at Spice-55 - a Thai restaurant in Helen. We had - seriously - the most enthusiastic waiter of all time. I have never had anyone sing "Happy Birthday" to me with as much - well, enthusiasm. He was a hoot! He giggled at everything you said and had a huge smile! The food was great. Austin was able to get sushi (which he loves) and the girls were able to get "Cody Special Fried Rice" - fried rice with no vegetables. That's how my Cody always orders it. 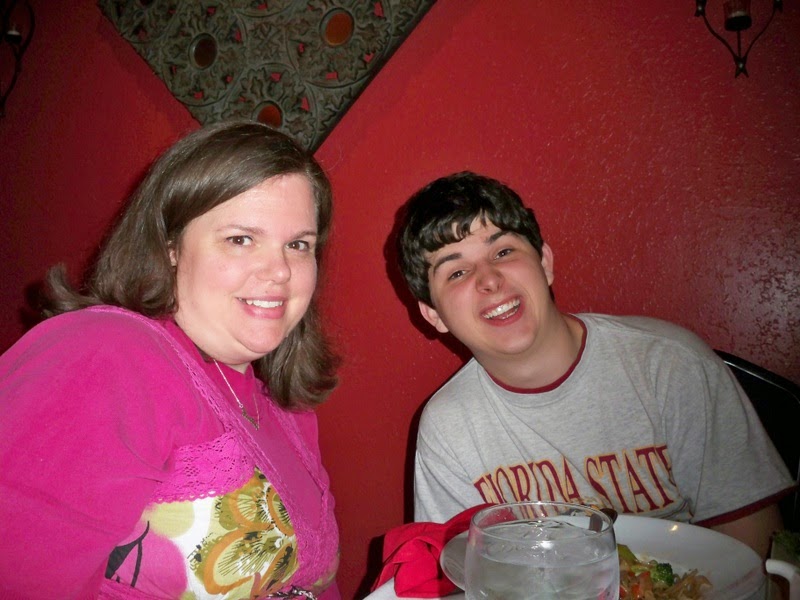 I had pad kee mao. It's my standard "go to" meal at Thai restaurants because the first (or maybe second) time I had Thai food I asked the waiter what his favorite dish was and that's what he recommended. I'm always worried about it being too spicy but it wasn't - it was perfect. I also ordered basil rolls which are always good and seem to be a healthier choice, maybe? They are rice noodles and cucumber with a big basil leaf wrapped in rice paper. It comes with a spicy sauce. I know I always feel like Thai food is lighter than Chinese food.

I'll sprinkle a few pictures throughout this post for your viewing pleasure.

One of the funniest things was the Asian Muzak they piped into the restaurant. We were sort of playing "Name That Tune" trying to figure out the songs. Sarabeth was able to pick out several but then Madonna's "Like A Virgin" came on. She said, "what are they saying? who is that?" Her mom just said, "You wouldn't have heard it before". And we tried to stifle our giggles. When she's older I'll tell her about the Madonna concert that Aunt Heather went to in 1985. Angie, Jamie and I embarrassed Sarabeth by dancing in our chairs to YMCA. Good times.

I had the best time last night because I got to be surrounded by the kids. It seems like wherever I sit it ends up being the kids table. I can't even pretend that it bothers me... I mean... I'm the cool aunt and my kid always chooses to sit beside me... so I can't complain. Although, to be honest, my kid sits beside me because he knows I can't eat restaurant portions and he likes to be close enough to "help me finish". It goes both ways... he had a sushi roll that was called a bagel roll that had salmon and cream cheese and a crispy layer... and I snagged a bite or two. I left his octopus alone. Not a fan.

Pain wise - I took a percocet so... it wasn't pain free but it wasn't miserable either. There's a lot of stuff I could do if I was willing to take a lot more drugs but... it's a balancing act. I wasn't driving or drinking or making any legal decisions so it was ok to go out "under the influence". The sad truth is that it doesn't really alter me. If anything, when the pain is eased up, I feel like I can think more clearly. I won't drive under the influence of pain meds but... it's a shame there's not a way to make the pain go away AND be able to function at the same time. It's rare that I HAVE to go out to eat and I certainly can't afford to treat myself to a nice meal out. We have a lot of great meals here at the house - and all of us can cook - so it's not like we ever HAVE to go out to eat to have a decent meal. But it's nice every now and then. I appreciated having my family gathered around.

Poor Austin entered the Publishers Clearinghouse Sweepstakes this year and has been getting tons of spam mail from them telling him that these things will "improve" his chances at winning. He has been diligently responding to all of these emails and really believed that he had a very good chance of winning. The announcement was supposed to be today - although it seems like they have other times of the year they do it? Right? For the past month he has been talking about how he will spend the money. He even set his alarm this morning so he could be awake and dressed if they came here. I never want to be a dream buster but you always want to help your kids be realistic about things. I told him many times that it wasn't likely to happen and his answer was always, "but it COULD happen" and you can't argue with that. Since they didn't show up in the driveway today with his roses and the big fake check, I think he's a little disappointed. He also burned his hand cooking dinner so he's uncomfortable from that, too.

My nieces and I watched The Muppet Movie (the 2011 version) yesterday and today and they had to leave this afternoon with only 2 minutes and 49 seconds to go but they want me to wait to watch the end with them. They have seen it before - they want to see my reaction to the end. Jamie is LOVING the plush rug that Cody and Marquee got me for my birthday and spent her afternoon making handprints and playing tic tac toe in the rug drinking her hot chocolate that Mawmaw made her. We love spoiling them when they're here.

I've had a bit of birthday whiplash today. I'm dragging. I was badly out of breath this morning but determined to accomplish the only two tasks that I HAD to do today early on. The humidity is high so it took twice as long to straighten my hair and it didn't work. I'm still a frizzy mess. I'm not in absolute misery but I don't feel great either. Somehow, though, hurting after a few good days is less frustrating than hurting for no good reason. I'm gonna float on that for awhile.

That's about all for today! Happy Wednesday, y'all! 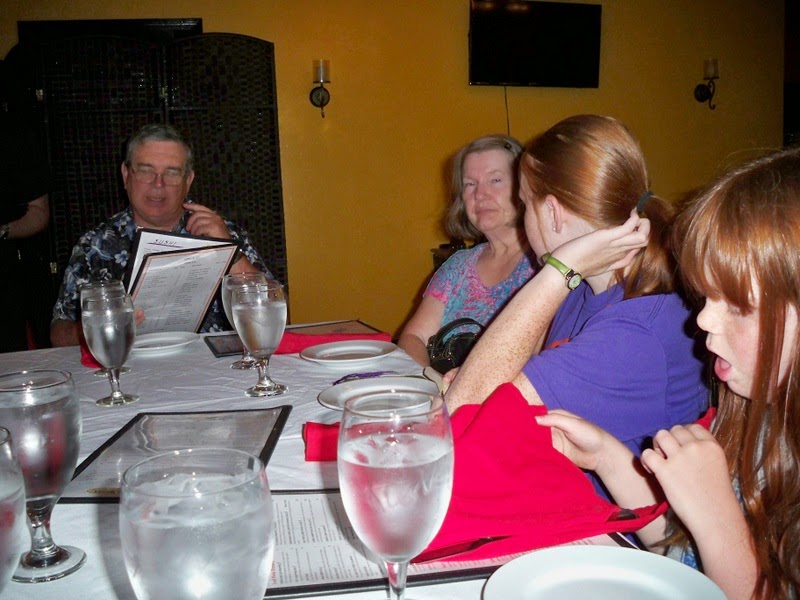 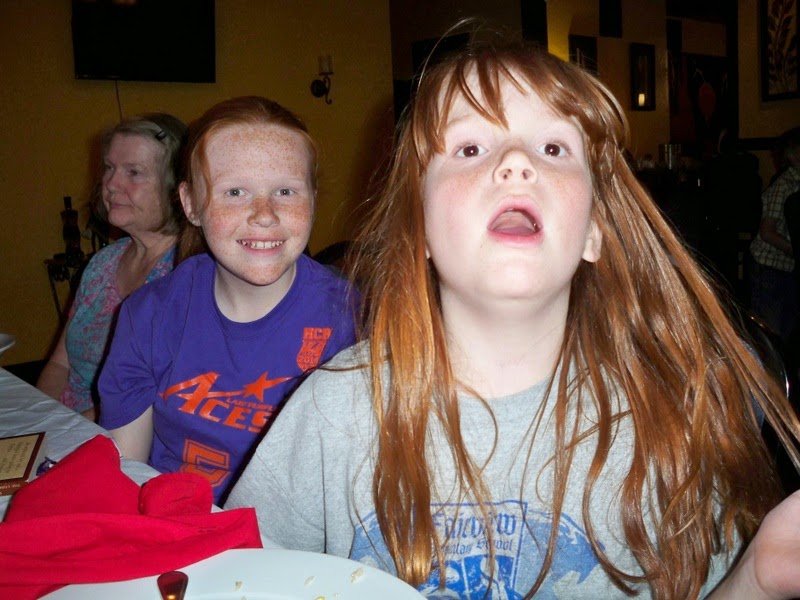 These picture show you had a great time! You have much love surrounding you. The weekend birthday party and this dinner. Your family loves you so much. You are very blessed.

I have fibro. I learned pain will not be the boss of me. I manage the pain and my schedule so there aren't intense periods of activity and then inactivity. This and my weight loss helps. You look so happy. You are an inspiration.