Life In The Whine Cellar

It started out as a fuzzy blanket on the floor in front of the tv. My niece Jamie would make her nest there when she was visiting. That evolved to a single mattress on the floor which... kinda crowded things up but I also loved falling asleep on the mattress watching tv. I love to sleep with the tv on but with satellite it is so expensive to have tvs in every room. I spend more time in the living room so it made sense to have the tv there... but that meant I would have to sleep on the couch or the mattress if I wanted to fall asleep with the tv. And... when Tasha spends the night here she sleeps in my bed because Austin's room smells like boy. My mom kept saying, "we need to put a daybed in here" and I sort of resisted but I had about a half dozen falls that involved the mattress on the floor. With my spine, even the slightest jolt is painful.

So eventually I said, "let's do it." My mom loves painting and redecorating and that sort of thing so if  you even hint that you might consider a change... she's all for it. In just an hour or so she had commandeered Pop as her assistant and had a daybed up in my living room. We put the bed where the couch had been, moved the couch to where the loveseat was and put the loveseat right behind the couch creating a little sitting area that looks out on the lake. Here are some pictures to demonstrate. A little. 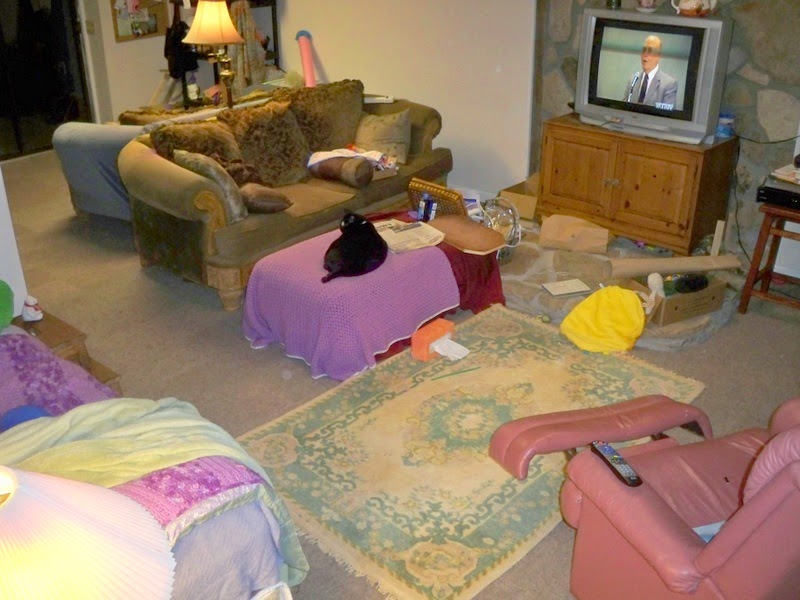 I was going to wait until I straightened up to take pictures and then decided that might not ever happen so... don't judge. It's lived in.

This shows the view as you come down the stairs into my Whine Cellar. Lots of open floor space where there was a mattress. 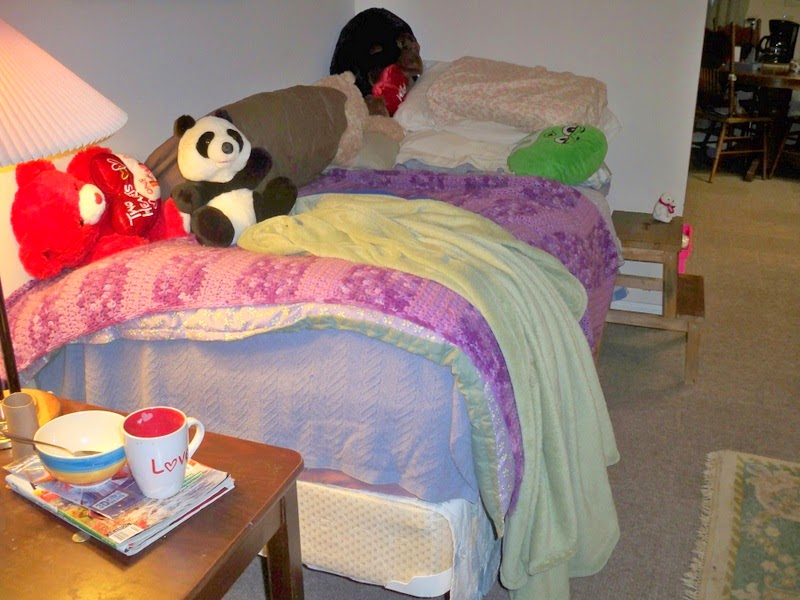 This is the daybed on the wall where the couch used to be. Sarabeth and Jamie christened it "the Princess Bed" which is not surprising since we've been eating at "the Princess Table" at every family gathering since they were able to sit up. We do a lot of Princess around here. 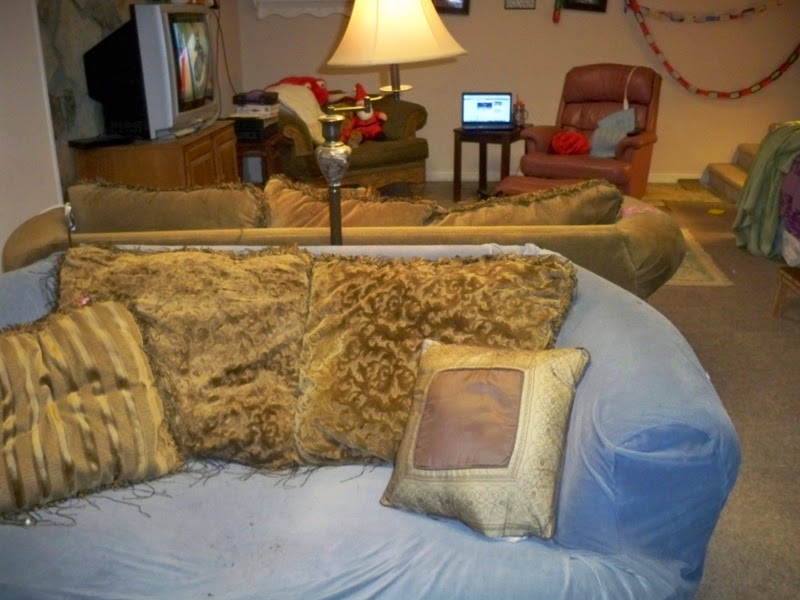 This is the view as you come in the sliding glass door, looking over to the living room. I've got to get someone to slide the couch over a little because they're not perfectly straight and... I'm no perfectionist but it does sort of bug me.

Notice our countdown chains on the wall... counting down to Christmas and Grandbaby #1. 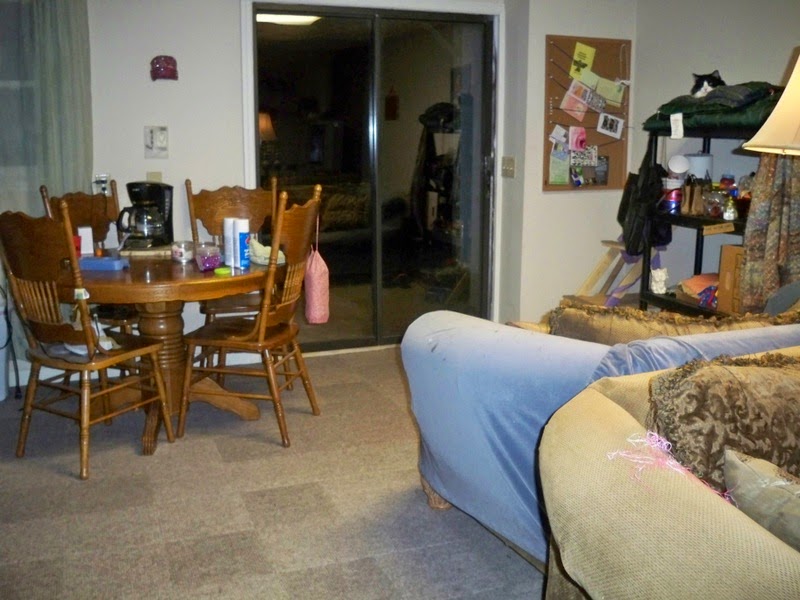 Here you can kind of see how the dining area is. Eventually I'd like to have a microwave and a little fridge in this area to cut down on the need to climb stairs to get to my parents' kitchen. Things are a bit cluttered because I haven't found homes for everything yet.

We are still enjoying the carpet squares that Austin and his friend Logan laid last Summer after the flood. We had kept some of the squares up because we would have occasional seepage but... knock wood/cross fingers we haven't had a problem in several months. I'd love to have a really cushy, plush carpet but it's just not a good idea for a basement. 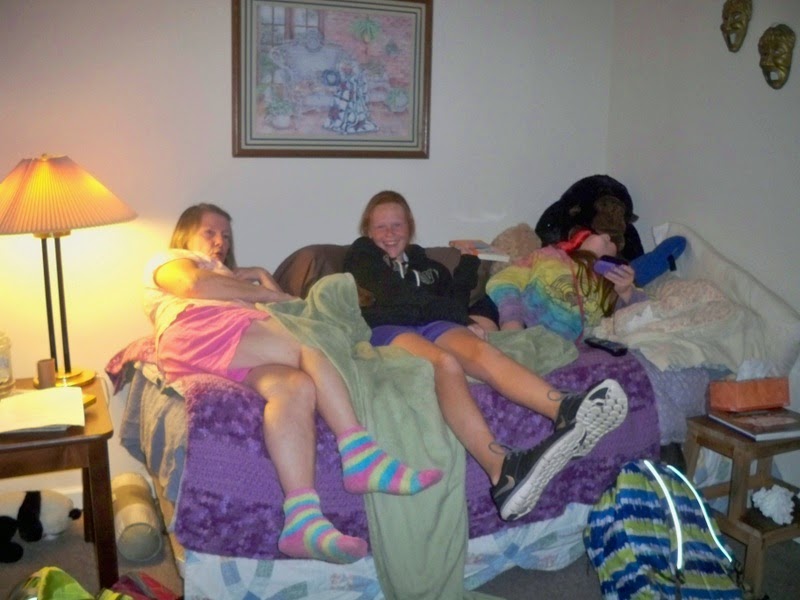 So now Jamie has been promoted from her little rug on the floor to the Princess bed and there's enough room for Bibby (her sister) and Mawmaw and Oscar (aka Abdul, look closely at the green blanket between Mawmaw and Sarabeth which is why Jamie's head is flung back laughing). 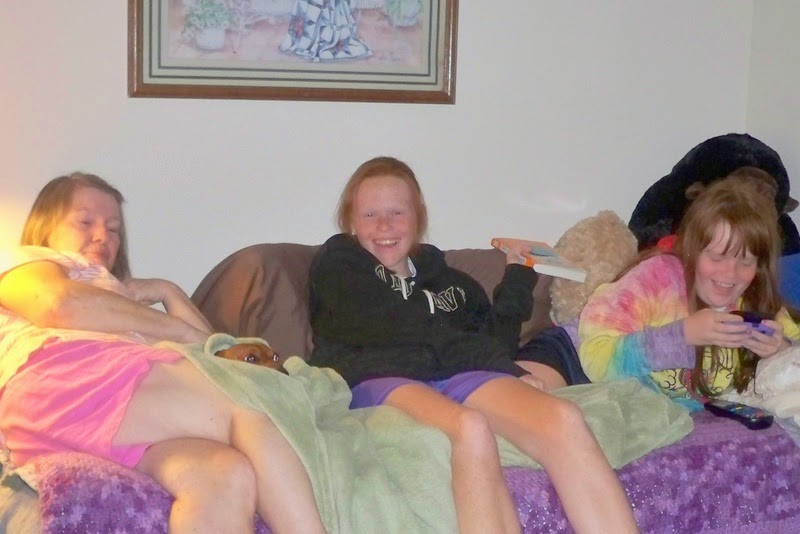 Notice the cellphone Jamie is holding? That's my cellphone. She was playing with it while we waited to pick her sister up from school and she said, "I just love old timey technology!". It's maybe five years old but it's not a smart phone. She was still playing with the phone while I was texting with her mom to let her know what the kids needed from the house to take to church. After she left I noticed that Jamie had sent a few texts to her mom and had the tech savvy to know to put her name at the end of her text to let her mom know it was coming from her and not me. She's nine. And hilarious. 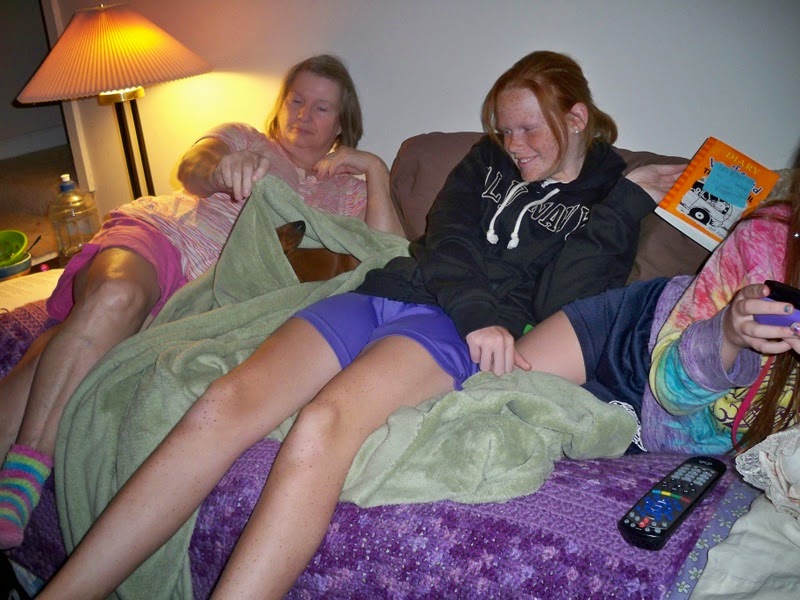 Notice how much taller Sarabeth is than Mawmaw? Sixth grade, y'all! And you can also see more of Abdul the Dachshund under the green blanket. 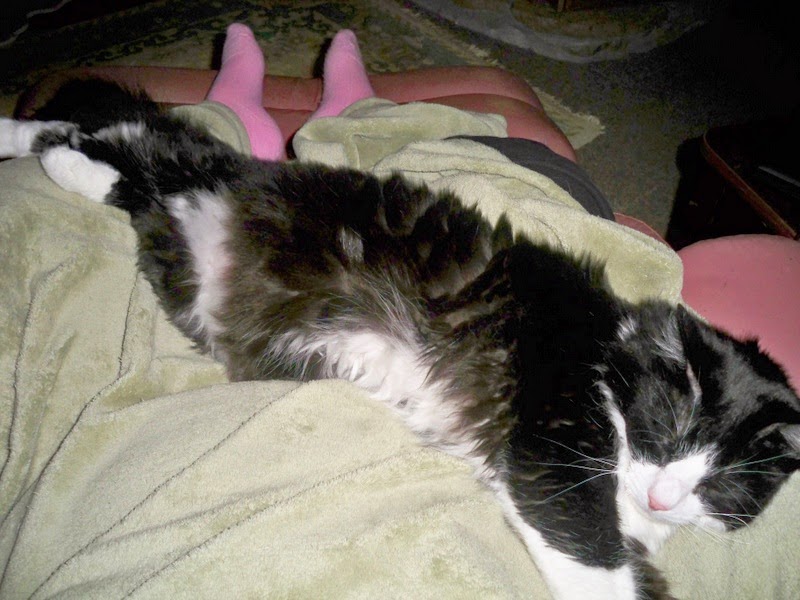 I've had a rough week pain wise and a little cold and congestion. The pain gets worse when I lay down - something about the ways the discs and nerves are compressed. Sleeping in the recliner is the least painful position... except for the cat who sleeps on top of me.


And can you stand a few more Fall Photos?  Here you go. 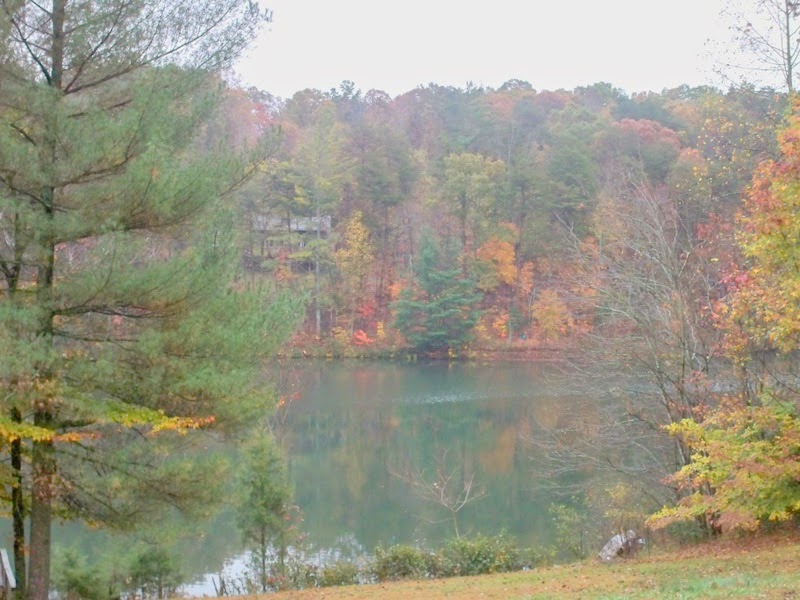 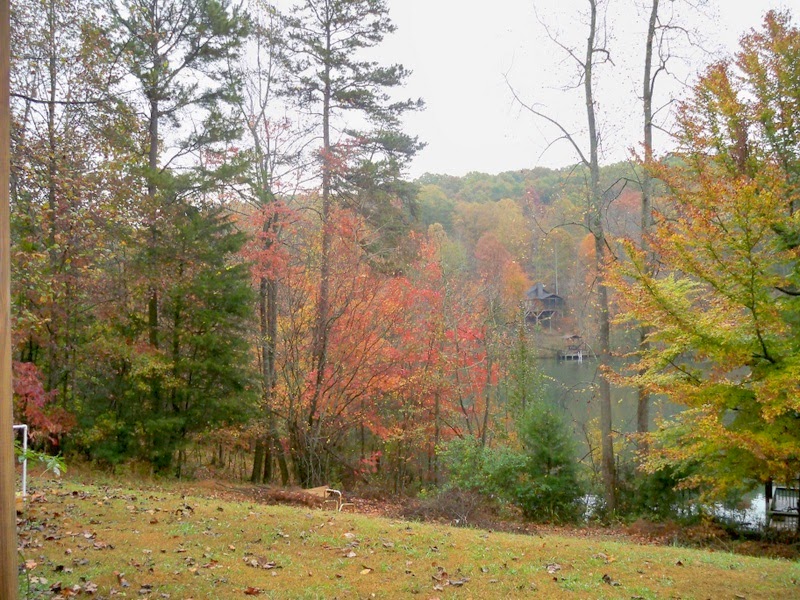 And that's what's happening here in the Whine Cellar this week. Love and hugs and happy weekend, y'all!

That looks really nice and super comfortable.
You are lucky to still have a bit of fall outside. Nice pics too.
Oscar knows what's going on for sure. :)
m~

Nice little Whine Cellar you have Heather. I can't sleep on a regular bed either cuz of my back and and knees. It's either a recliner or my hospital bed which I bought used for $100 and bought a new mattress for it for $100. Since I'm newly divorced, I don't have any furniture. I wanted to buy furniture to my taste. I may have to wait a couple months but it's ok. All I have a a white rocking chair like you buy from Cracker Barrel and a wheelchair from when I had my knee replaced. It's coming It's coming in handy since I have a fractured foot. My sister lended me a card table and my Smart TV is sitting on a box. It will be a slow process but I'll get furniture soon starting with a recliner.