That title sounds like one of Johnny Carsons old swami skits but it's the best I could do and it will get you caught up on all the haps here in the old nest.

First... Tasha and Austin were showered yesterday with lots of lovely things for Cosette. I'm not a big fan of showers - I try but you know it's all about uncomfortable chairs and anxiety over guest lists. They had a fair turnout and we did have a good time and Tasha looked lovely wearing one of my dresses that I have never felt like it fit me right. She definitely wore it better! Austin's dad and step-mom made the long journey up here - they live almost near the Alabama line and we're up in the far northeast corner of the state so it's a road trip for sure! I get excited thinking how many people are going to love this baby girl and be in her life and that's the real pay off of a shower for me. I'm posting a lot of pictures since some of you aren't on facebook but for the facebook folks, you saw these yesterday. 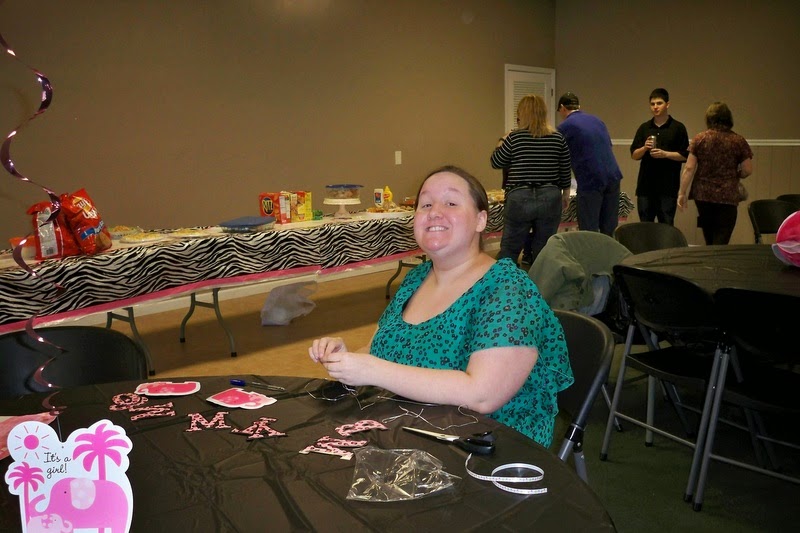 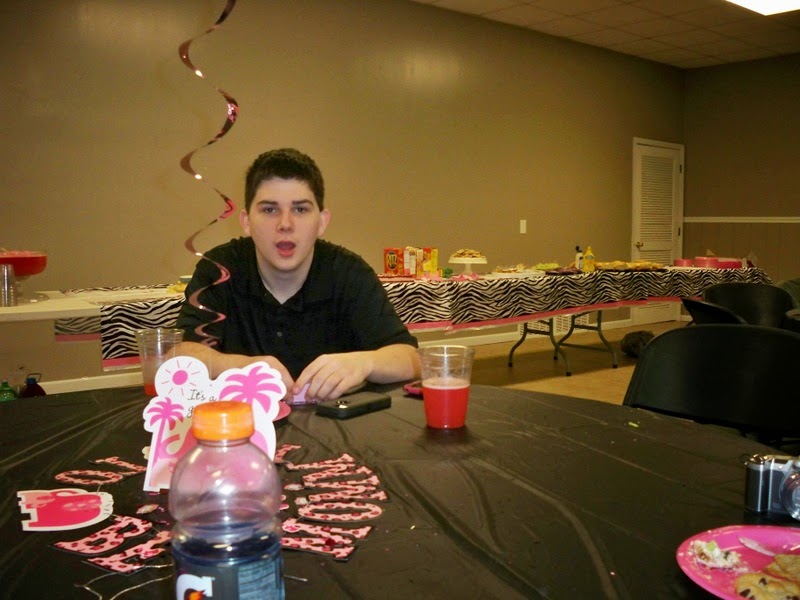 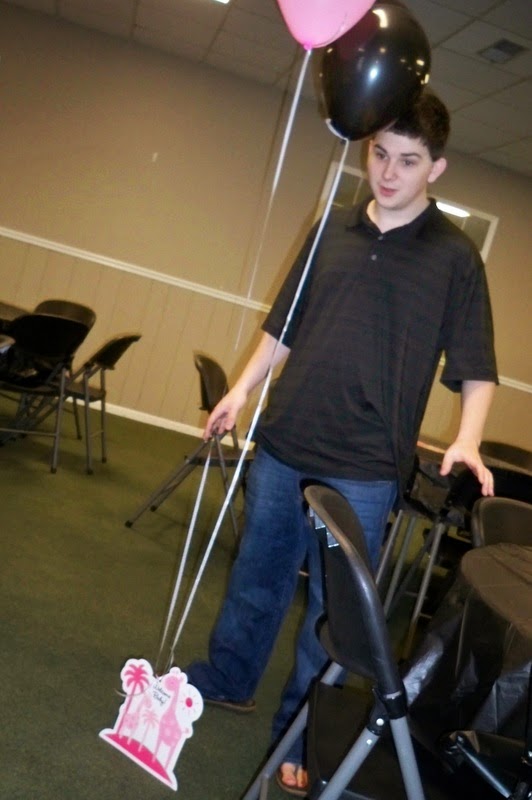 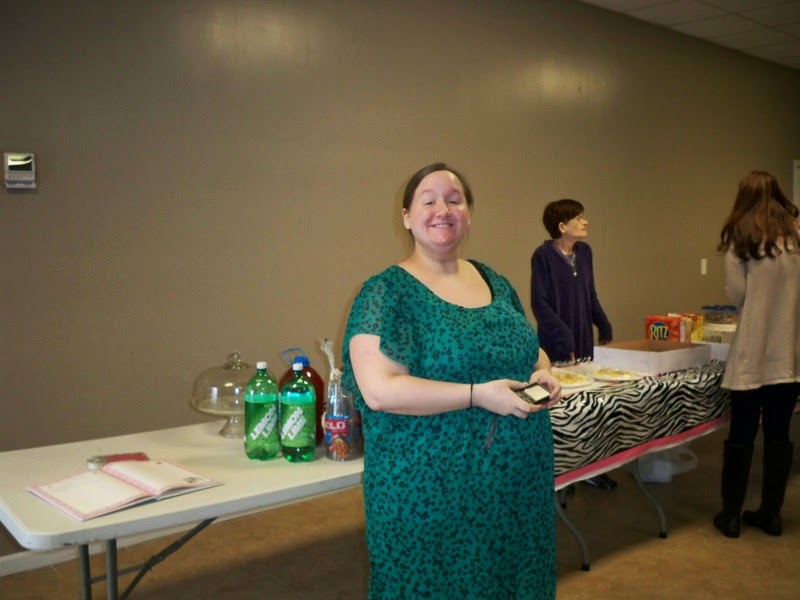 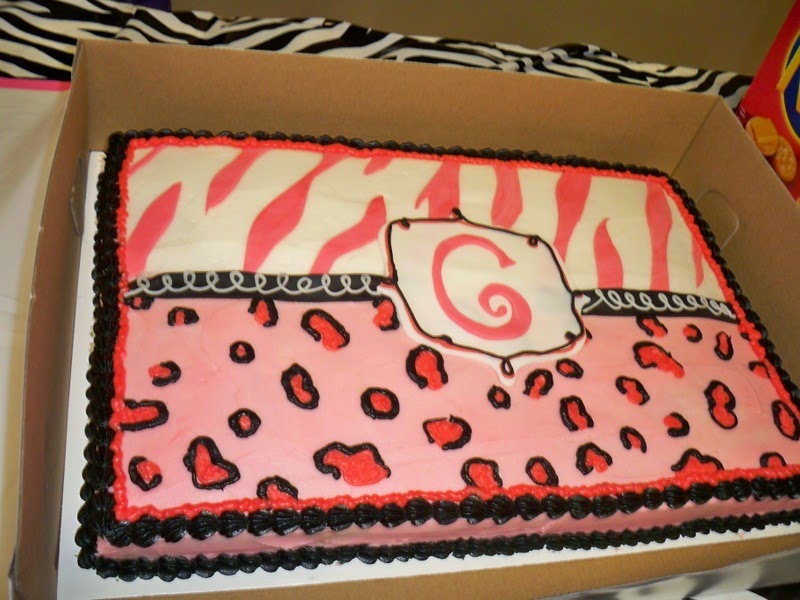 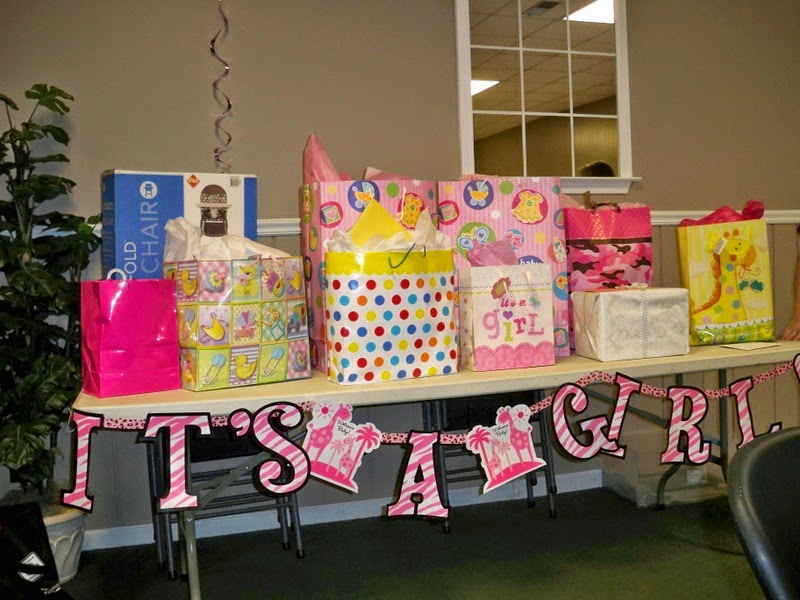 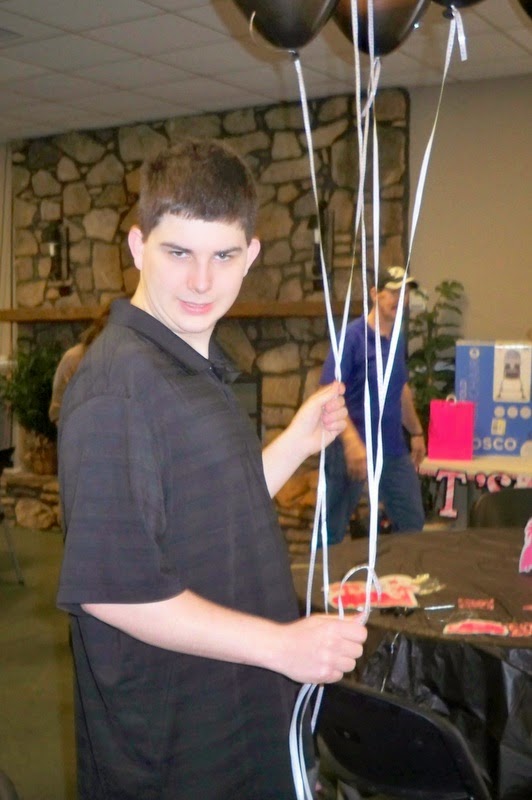 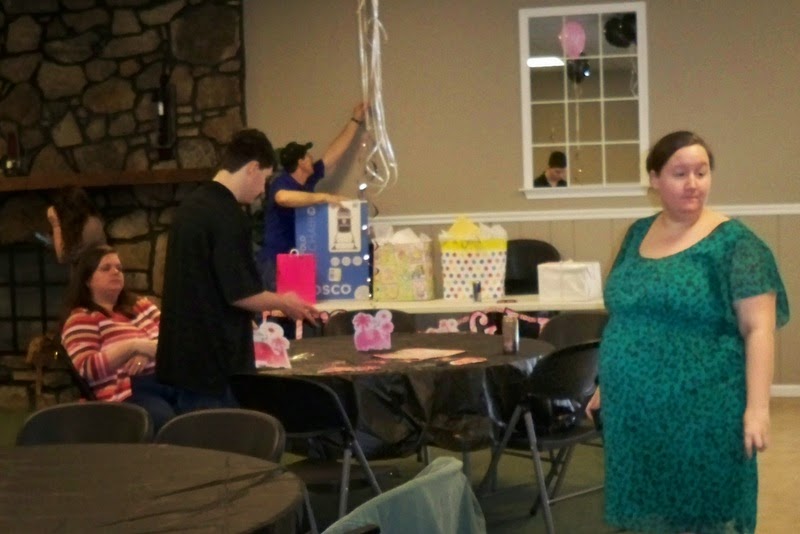 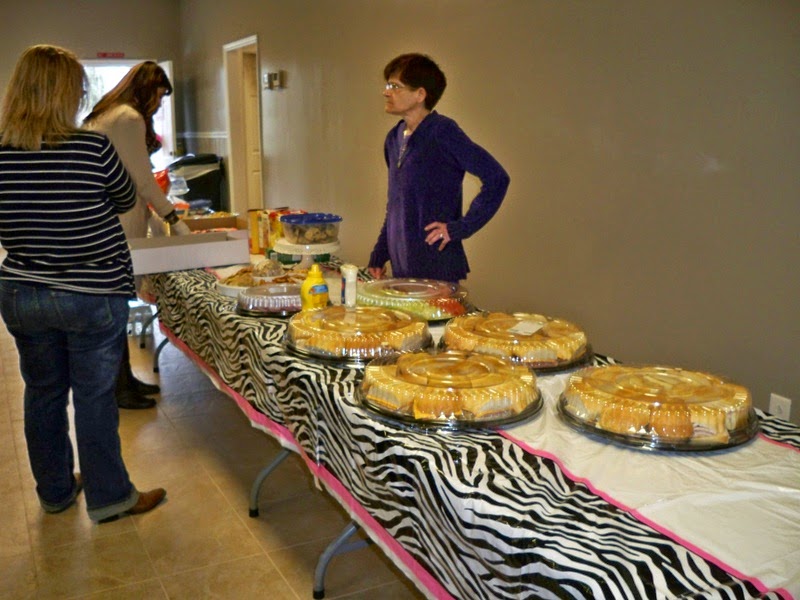 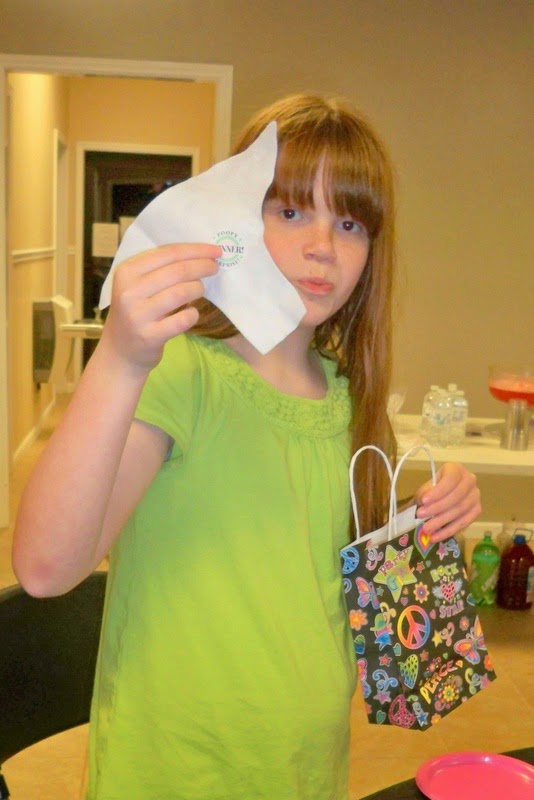 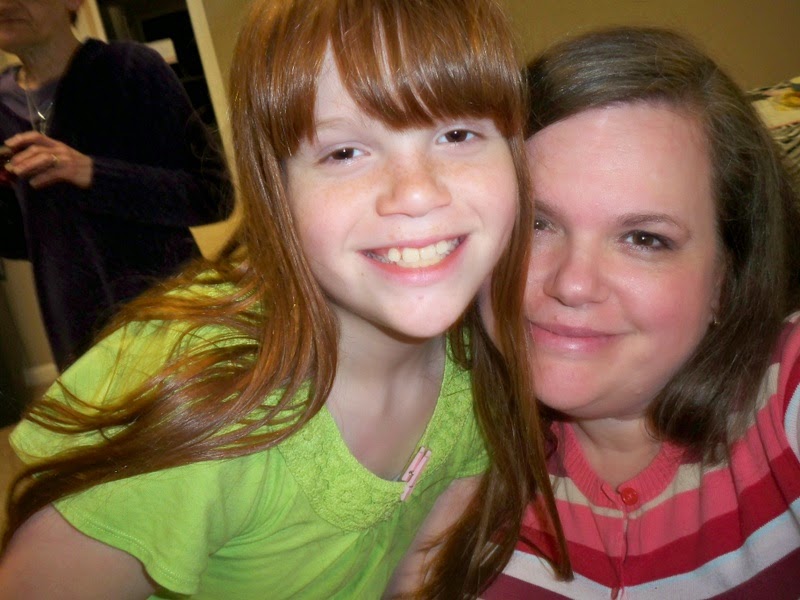 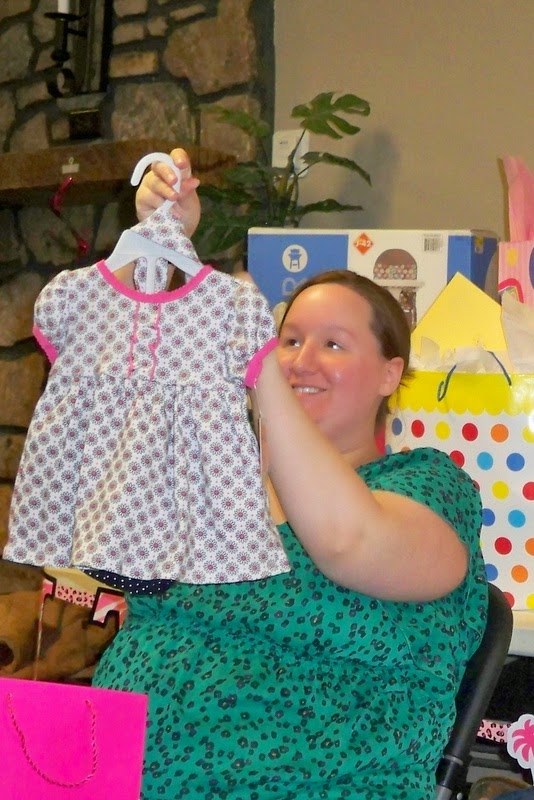 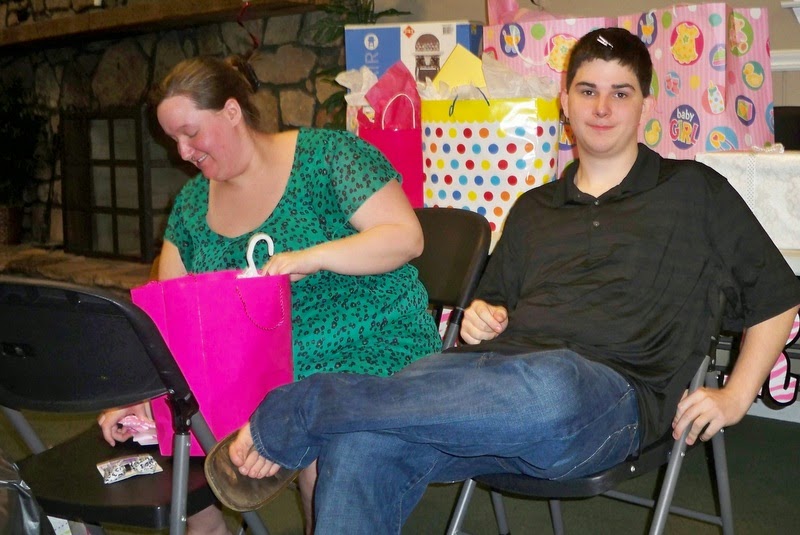 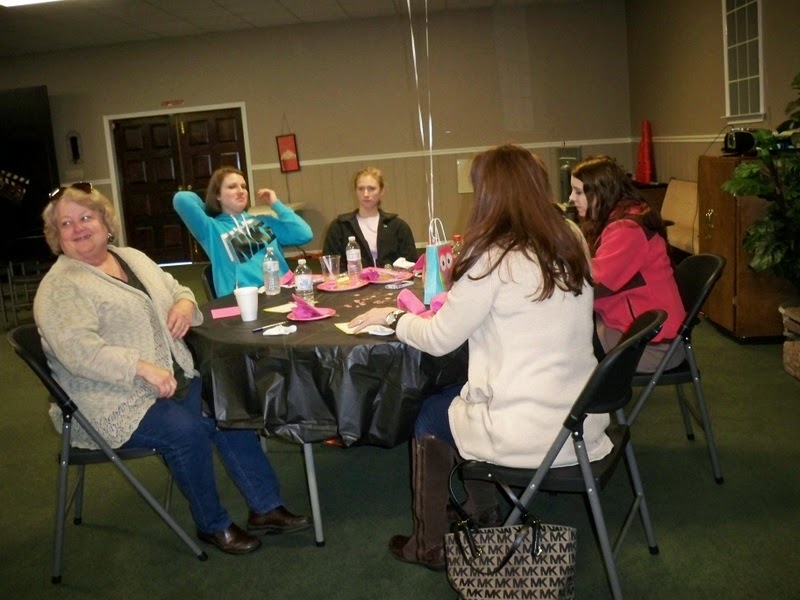 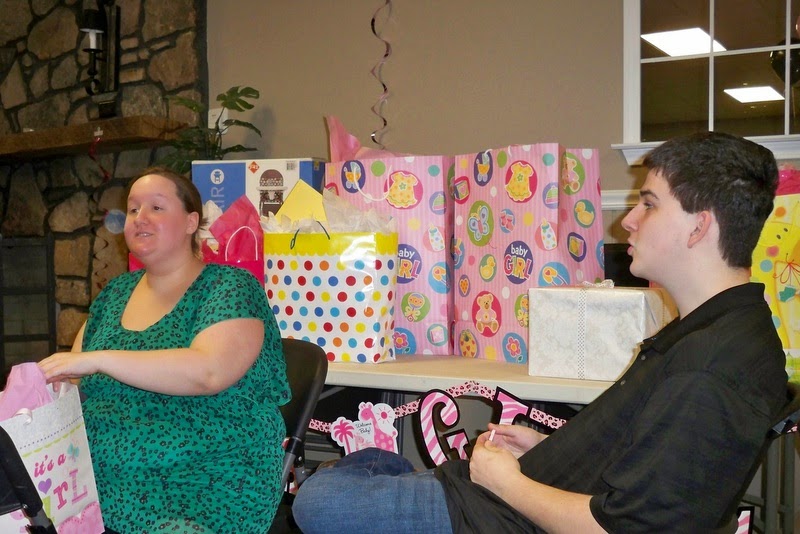 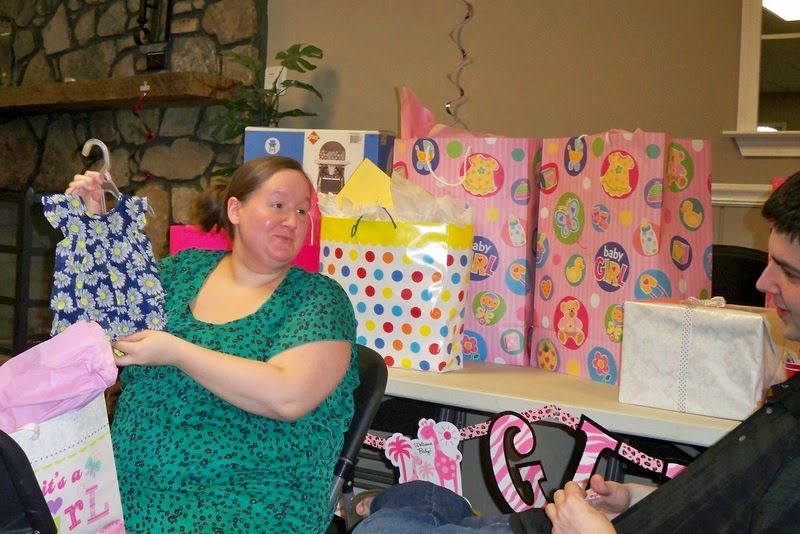 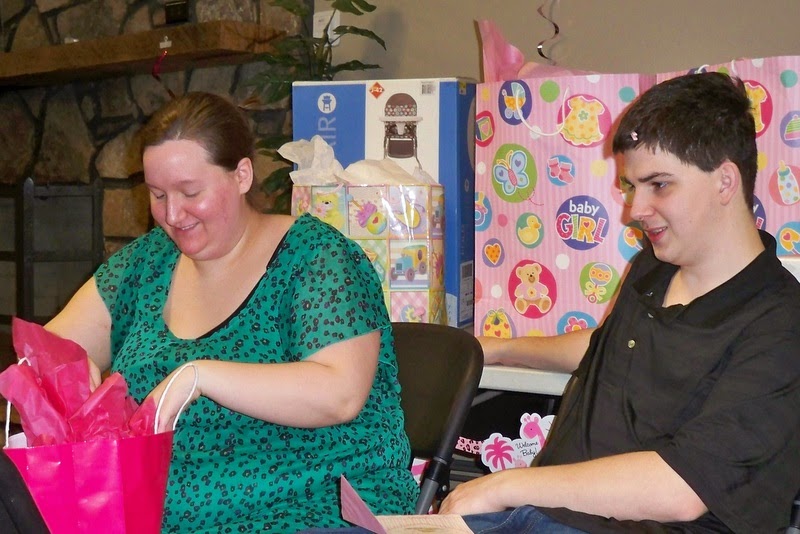 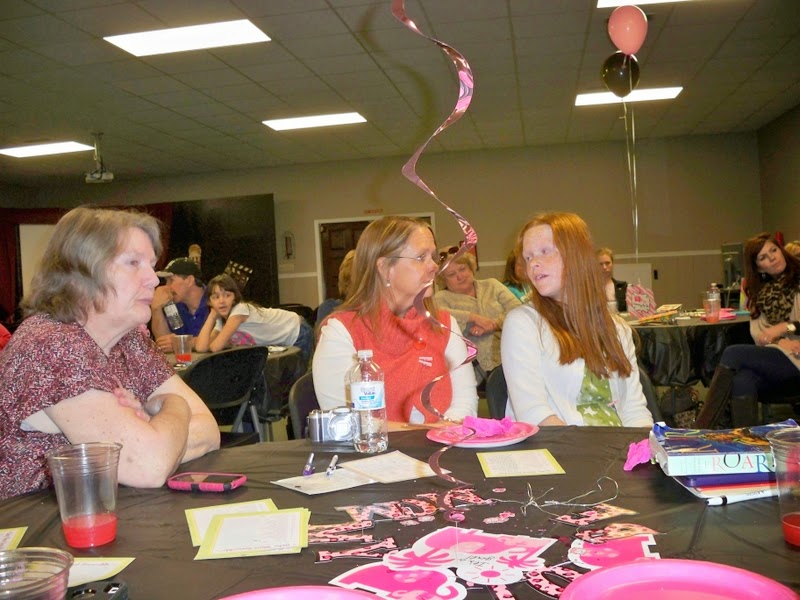 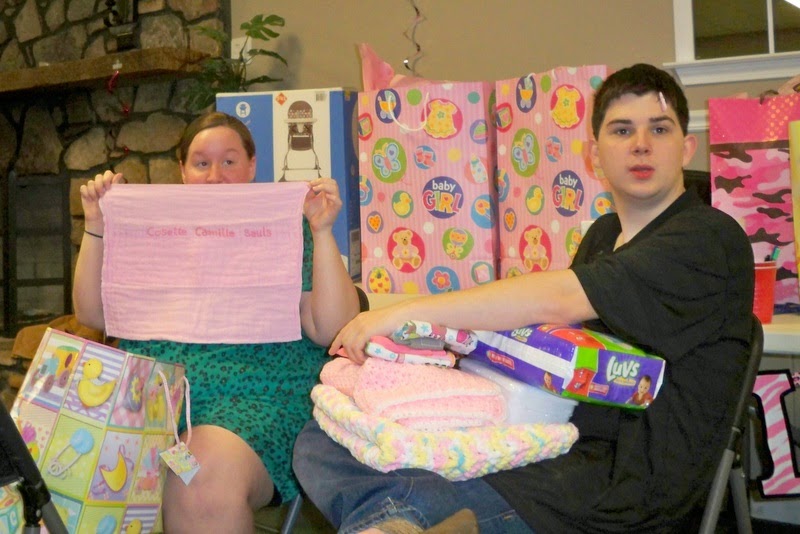 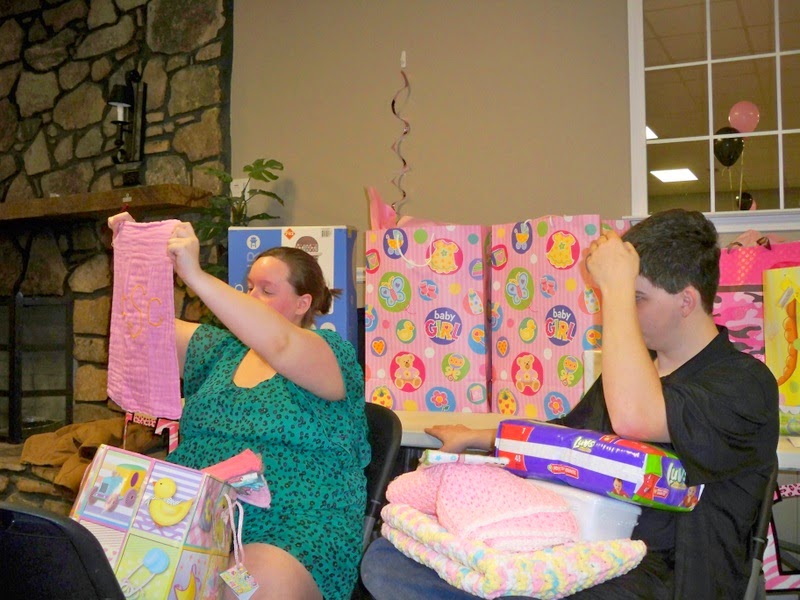 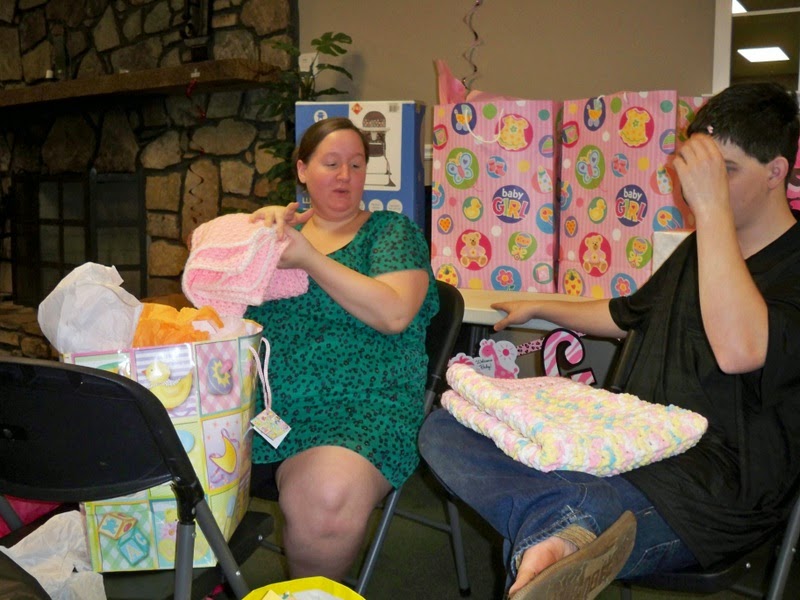 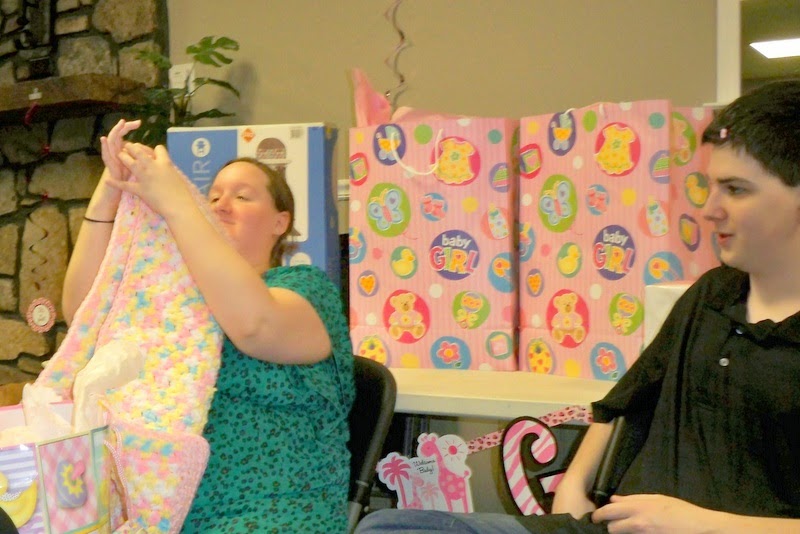 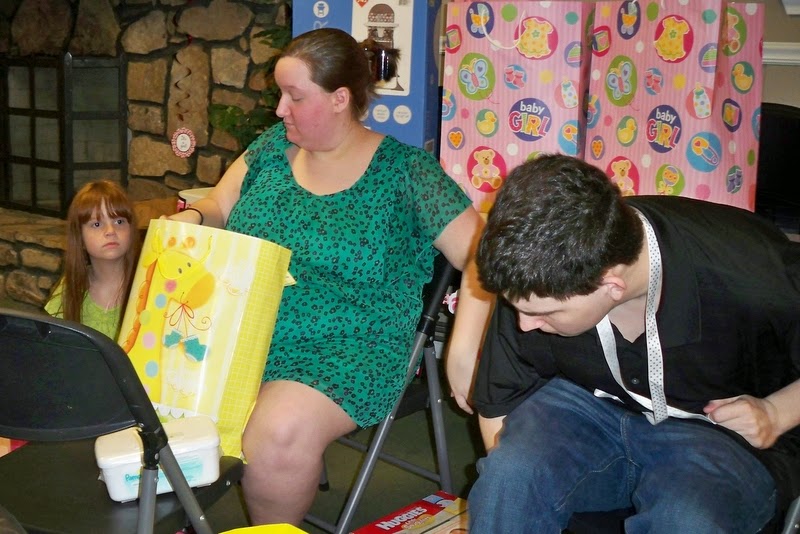 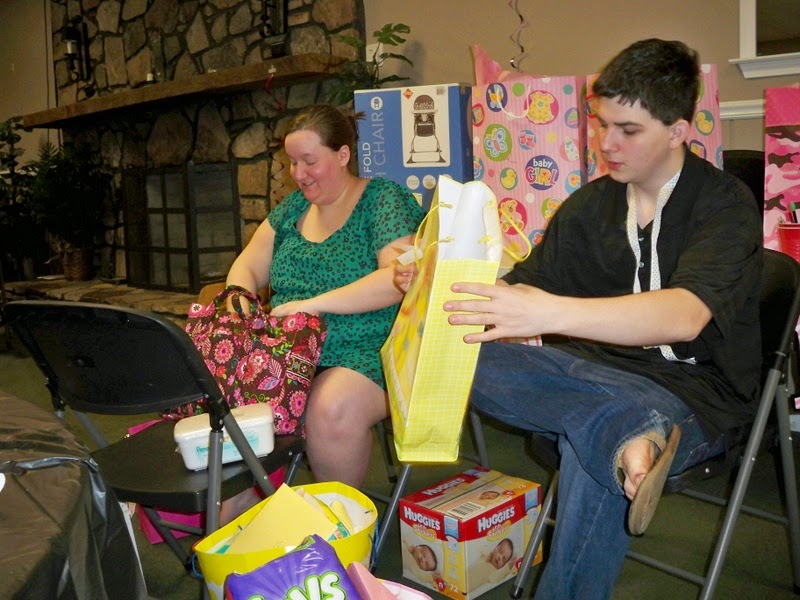 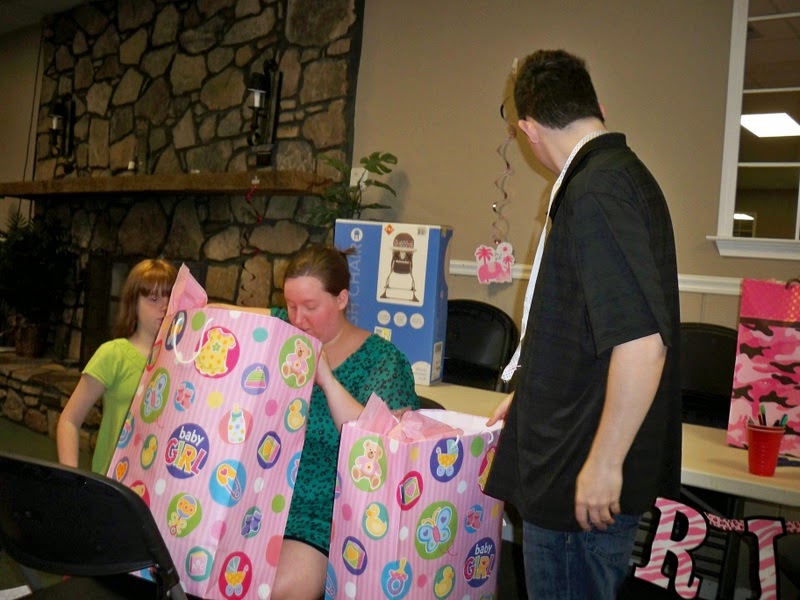 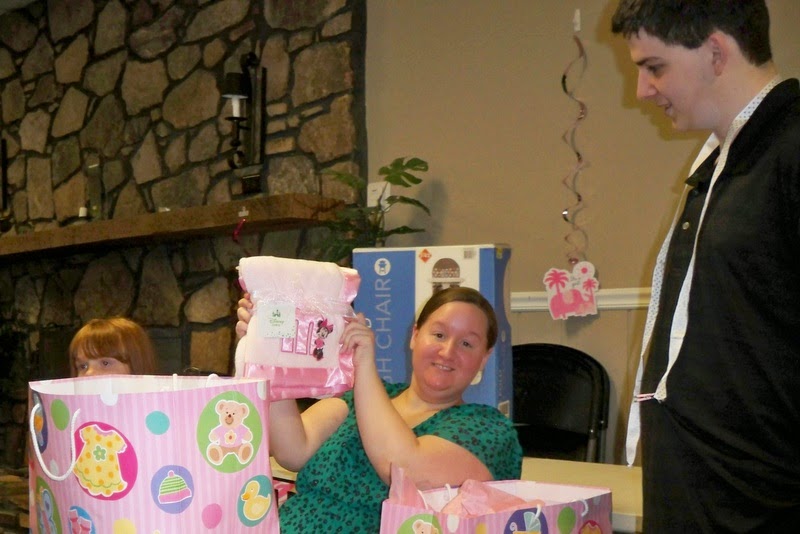 Part Dos... As I've previously mentioned my brother Bryan is marrying the lovely Lady Helen on June 6th. Bryan and Helen live in New York (the Upper West Side for those of you who know how things work on that island). The wedding will be in Old Lyme, Connecticut where her parents have a home. This means we'll be taking this dog and pony show up north for a few days this summer. And it's not really a dog and pony show. We don't have a pony. But we are trying to coordinate itineraries among ourselves so that we can make the most of this once in a lifetime family gathering. The wedding part of the itinerary is organized quite nicely. They're experiencing all the pre-wedding parties and events and have a wedding planner who is dotting i's and crossing t's and we are so excited to be a part of something so nice.

I've mentioned before that Bryan is the only person in the world that has been witness to both of my weddings. The first one he was an usher and was 7 years old. The second one, he accompanied us to the hot side of hell (Las Vegas) to witness the unholy coupling of myself with he who should not be named. Have I ever mentioned that we didn't consummate that wedding until a month later? NOT an auspicious beginning. Nevertheless... the only consistent thing between my two failed marriages is the presence of my brother who is younger by ten years. Therefore, if he were bungee jumping off a mountain in Upper Tibet (not sure if there is an Upper Tibet) I would move heaven and earth to be at his wedding. I'm not kidding. In the past two years I've traveled no farther than "civilization" a half hour south so New York and Connecticut will entirely feel like Upper Tibet to me. But there's more... we've never seen him so happy and in love and my big sister heart just swells two sizes too big when I see two people who really love each other making a commitment to each other. It's going to be enough happy that I can push through the pain. Just has to happen.

Anyways... we've all been kinda dragging our feet on deciding who is going up when and where are they staying and what will we do. There's a question of whether or not we should bring grandma - that's a heckuva lot of traveling for a 91 year old woman but honestly, she gets around better than  me most days. Mawmaw is bringing Oscar because they can't bear to be apart. I'd bring Little Kitty but it would be my luck he'd Houdini his way out of his carry-on and take over the plane. I'm going to miss him but...

Anyways... sorry for all the rabbit chasing... we finally decided that we definitely want to take Sarabeth and Jamie to see their first Broadway show. They've been to shows at the Fox but you know it's not the same. Angie invited me along - because Aunt Heather is always happy to be there among the firsts so she can cry off some mascara. We found a show with a matinee that fits right in our schedule (Wicked) and there were good seats in the orchestra section available and now they have been purchased. It will be Jim, Angie, Sarabeth, Jamie, Aunt Heather and Pop taking in an afternoon show and getting back to our lodging before dark, I hope. The lodging is still being sorted out. There are many possibilities that don't involve a hotel for me and Mawmaw and Pop. Jim and Angie are getting a very small broom closet with a shared bathroom - or something like that - for the days we're in New York. Then we will travel to Connecticut where a guest house has been secured for the whole fam-a-lam. Think they'd mind if we took down the drapes and covered the front window with a confederate flag? No?

So the way it looks we'll be Tuesday and Wednesday in NYC and then Thursday - Sunday in Old Lyme, CT. I've got a dozen things I'd like to see in both locations but the reality is that I'm going to have to strike a balance between "once in a lifetime experience" and "not having to be carried home on a stretcher".

Before the shower yesterday my sweet daughter in law messaged me and wished me a good time at the shower and cautioned me to take it easy. I tried. The seats were hard and those nasty jelly-filled donuts that are replacing the discs in my back are all kind of compressed and I have a variety of numbness, extreme pain and muscle spasms in every part of my body you could think of. And a few that would surprise you. We're trying to arrange the wedding trip to take my 89 year old spine into consideration but I want to do so much!

I've rattled on too long here. One last thing... while working on my Ancestry.com stuff today I discovered that I am a 3rd cousin seven times removed of Meriwether Lewis, of Lewis and Clark and the Louisiana Purchase fame. This is the book I need to write - all our interesting ancestors.

This first column shows Meriwether Lewis going back to our common ancestor and the second shows that mutual ancestor down through me. As always, my research is all internet based using information available on ancestry.com and this may be a fact or just an interesting possibility.

That makes Meriwether Lewis my third cousin seven times removed. And it also makes for a very long blog. Hope you enjoyed! Love and hugs!