This Week / Last Week in Pictures

I have to be honest with you and say that apart from the progress on craft projects and the number of boxes of Luigi's Mango Italian Ice in the freezer most weeks in 2015 have looked the same thus far. I completely expect that to change since there are two babies and a wedding happening this year. What I'm saying is stick around, it's bound to get more interesting. Eventually.

Tomorrow Cody and Marquee are coming up to celebrate Austin's birthday (which was last Sunday). I did not go with Austin and Tasha to the doctor yesterday as I was in a whole world of pain PLUS had a sore throat/flu-ey feeling going on. She will be going twice a week starting this week-  I think -so I will have many opportunities to tag along. Cosette is up to about 3 and a half pounds and has chubby cheeks so I think we're past any growth issues. She's flipped back to breech but there's still room for her to flip again in the next two months. 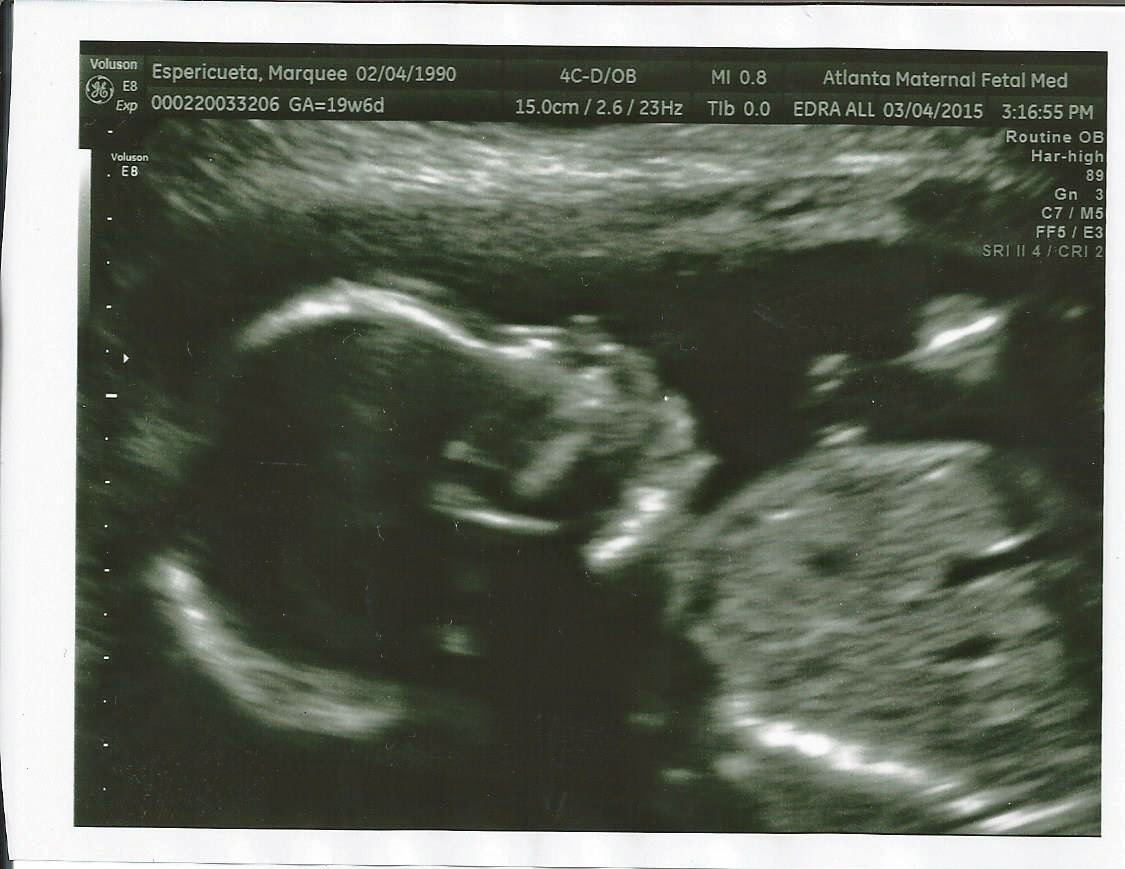 Baby Peanut/Oliver/Elijah/Name-as-yet-undetermined also had an ultrasound this week and has grown several ounces since last week. He has placenta previa so they're getting watched a little more closely as well. I was trying to determine the official name for things like, you know, monograms and stuff. I asked Cody and he said 100 per cent Oliver. Marquee said 90 per cent. If mama ain't sure yet, I'm not monogramming yet. Cody was going to be a different name up until the last month so I certainly know that pregnant minds can be changed. And in case you're wondering if he's for sure a boy... 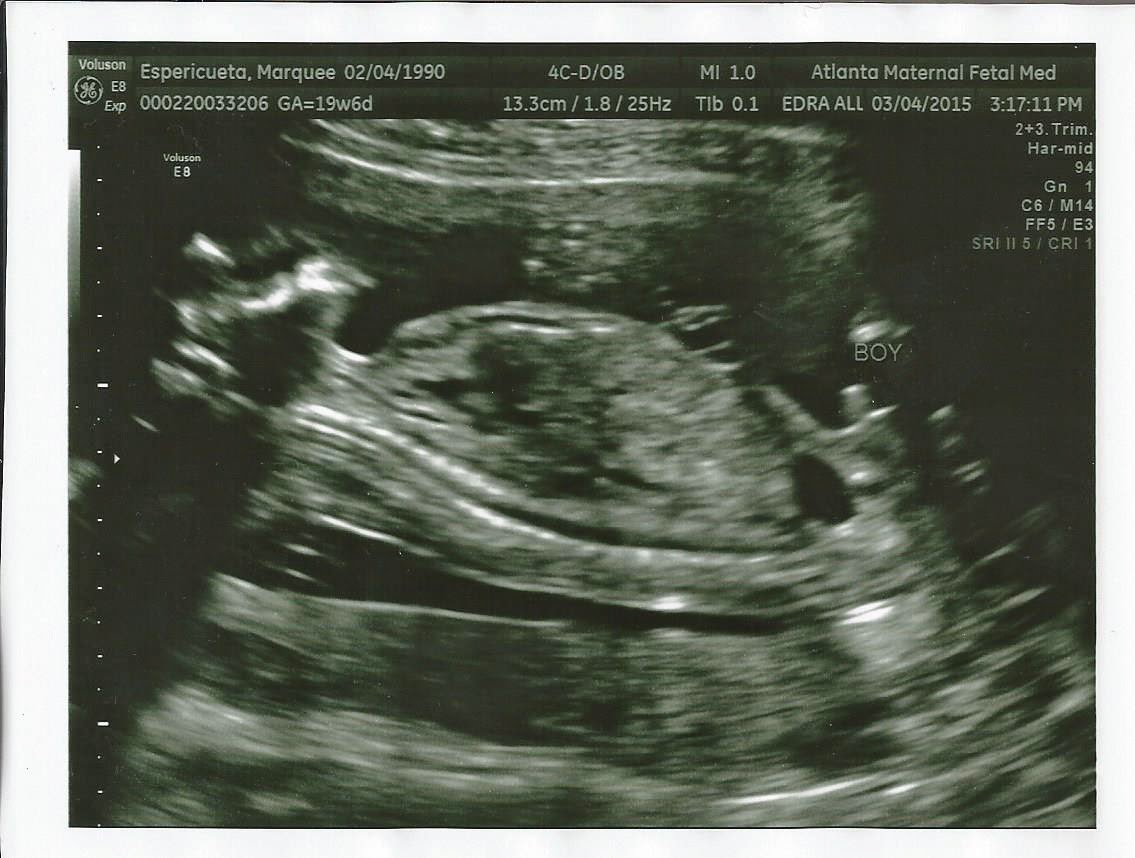 He's happy to show you. 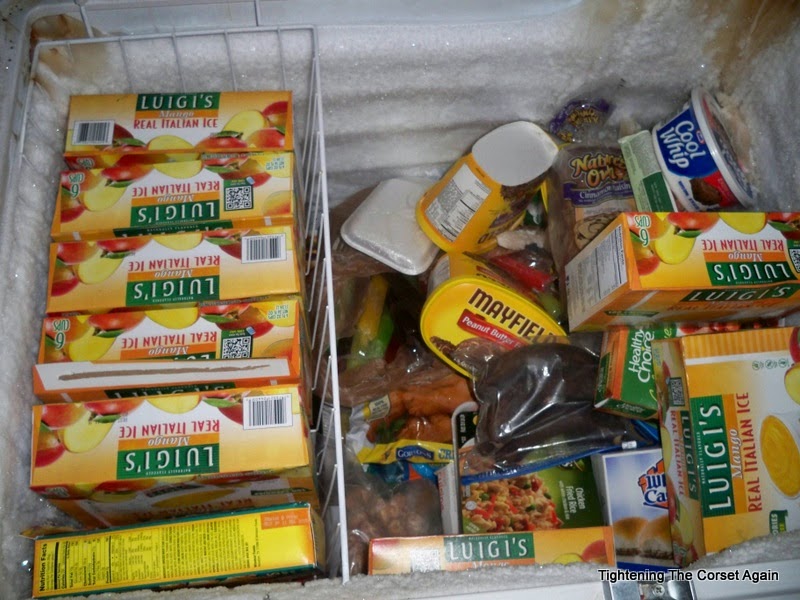 I did finally get out of the house the other day to go to the store and stocked up on my favorites. Luigi's has been on sale for the past two weeks and I'm just being frugal. I'm not hoarding. I promise. I also stocked up on gatorade (do I have to call it Seminol-aid now?) (My kids and my niece Jamie will get that joke.) because it's been two dollars cheaper per 8-pack. Pop picked up an 8 pack when he went to the store today too. It's the little things in life... I was shocked to see how many trees have come down around here due to the Winter storms. I cannot exaggerate it - you literally cannot go a half mile without a tree down. I had no idea. 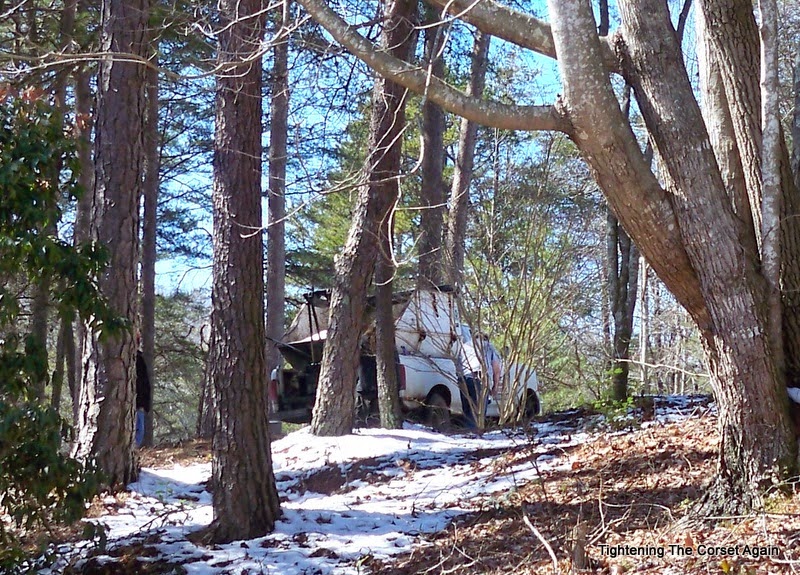 What else can I share? Oh, this... last week our trash men thought they could navigate our icy driveway and... slid off into the yard and got stuck. It was funny enough (and things have been SOOOOO slow around here) that I climbed the stairs to snap a few ninja photos. Yes, our trash service uses an old pick up truck, we're fancy around here. They have a bigger truck but the little pick up does our little pick up. We had snow on the ground all week last week and our driveway remained un-navigable for several days. Just when I thought we wouldn't have a single flake all year we had two weeks in a row of frozen stuff and I'm completely over it. I know I said that earlier this week but just in case you missed it, I'm over this Winter and ready for Spring. This being Georgia it will be Spring-like in a matter of days, I'm sure. And the time change makes a huge difference as well so I'm excited for that to happen this weekend. Want to see some more photos of the trash truck stuck on the driveway? 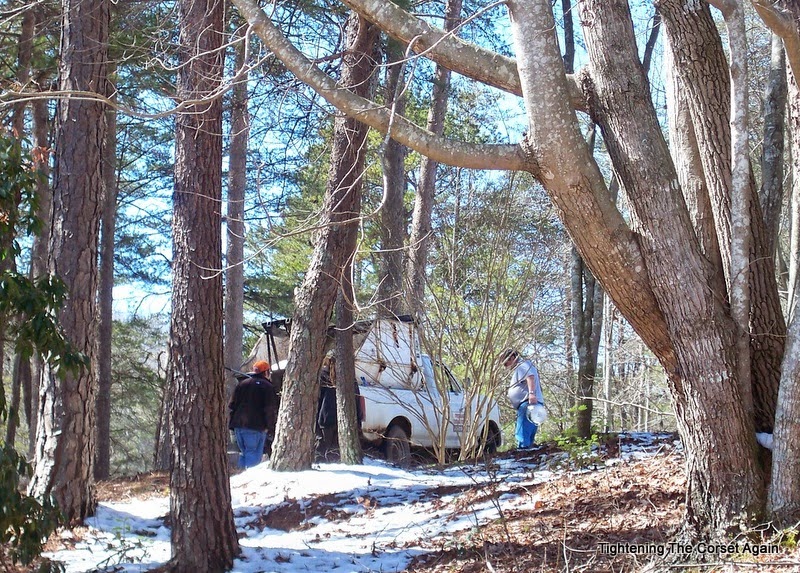 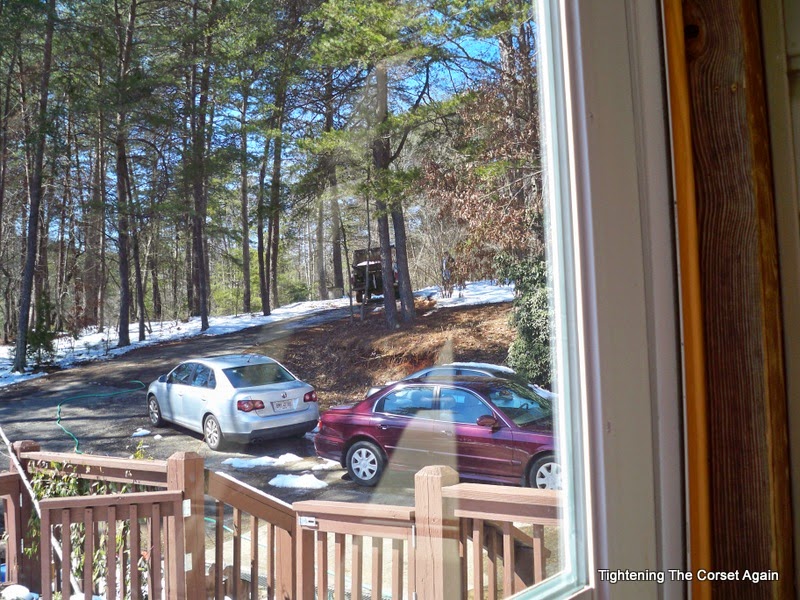 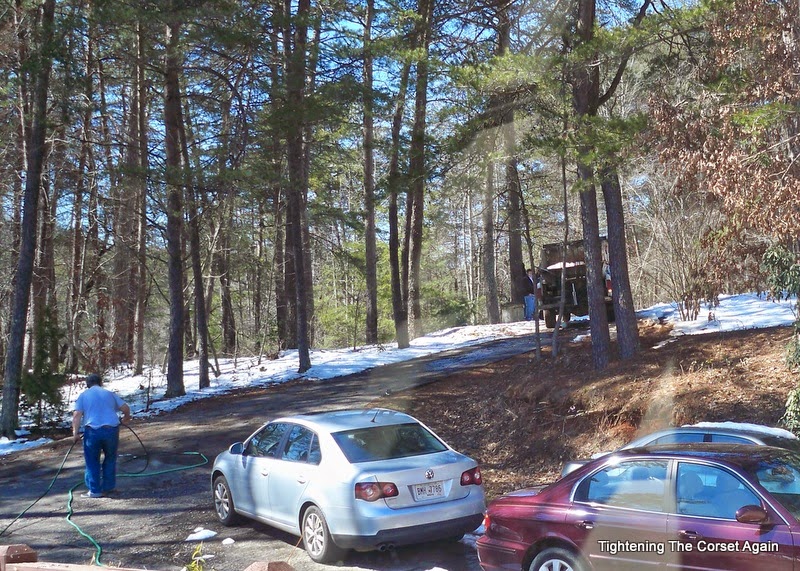 And that's my dad out on the driveway with a water hose in his shirt sleeves because honestly, it wasn't that cold despite the white stuff everywhere. The trash truck slung mud all over the cars while they were trying to dig out. Honestly, our driveway IS steep and it was obviously frozen. I don't know why they even tried to drive down. It would have been much easier for them just to walk down and retrieve the trash.

Also in the past week or so this happened: 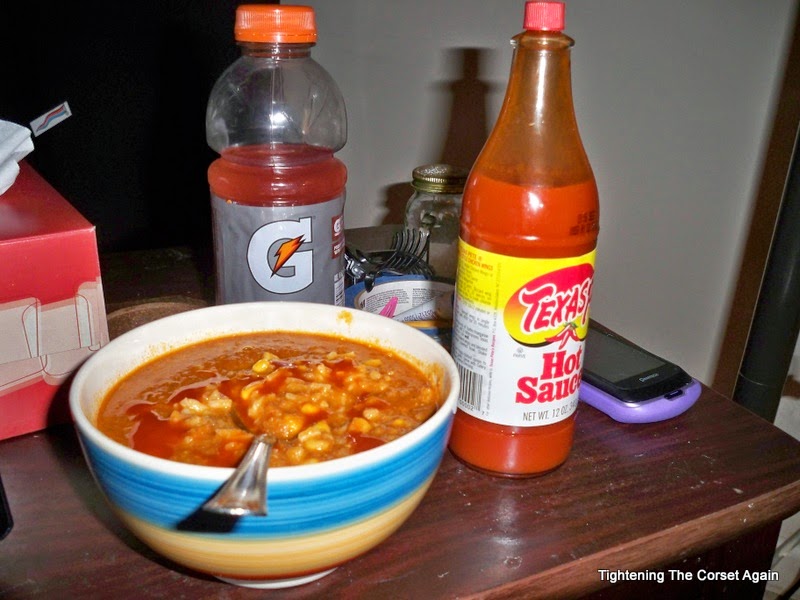 it's amazing how happy I can be with canned brunswick stew with hot sauce. And Seminol-aid. 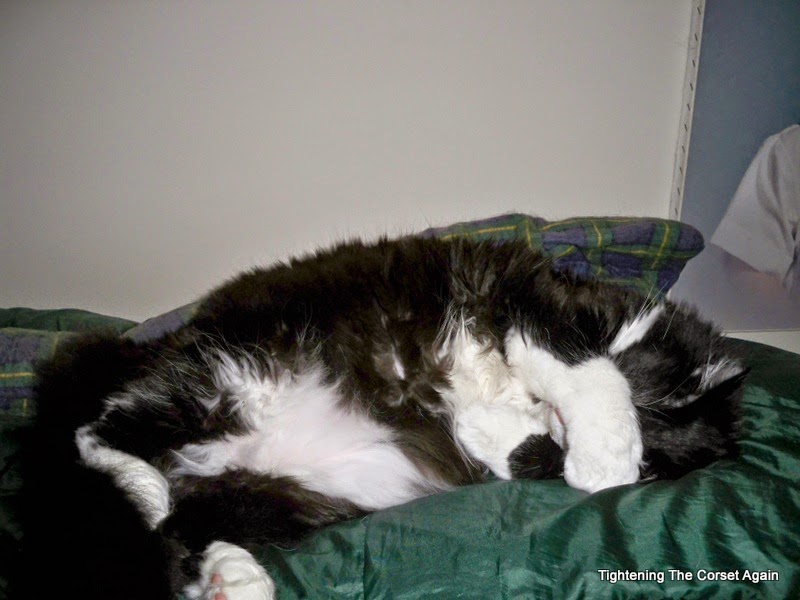 And seriously, how cute is this baby covering his eyes while he sleeps? He's on the top shelf of my little utility shelf where he napped for like... 25 hours yesterday. He usually just naps there in the early evening but he was up there all day yesterday and almost all night. He woke me up this morning because his favorite stray cat was outside the door and he wanted me to get up and feed her. He's the sweetest thing about making sure everyone and everything is done exactly the same and he knows that we've been putting food out every morning for Rosalita.

Speaking of cute babies... another of Peanut... he's 20 weeks today!

And our final snow pictures. I love how the snow outlines the topography here. It's much more hilly than it looks without snow. 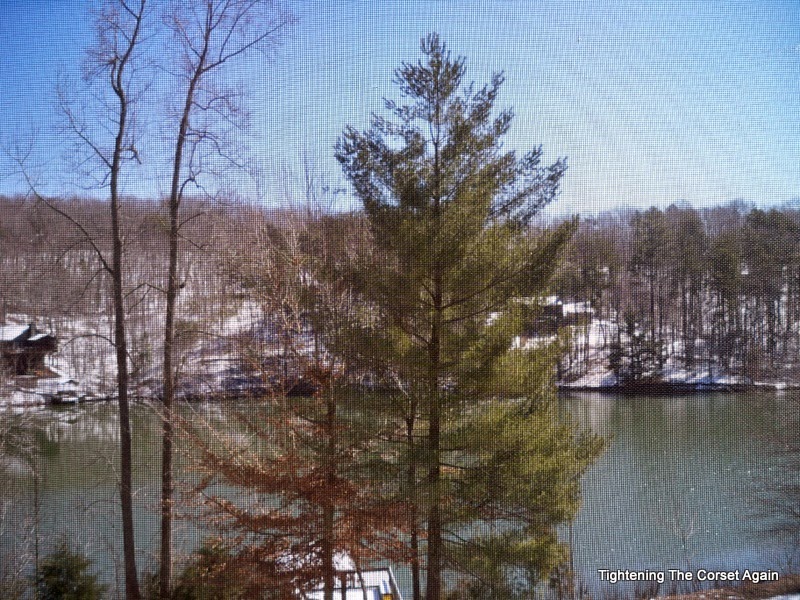 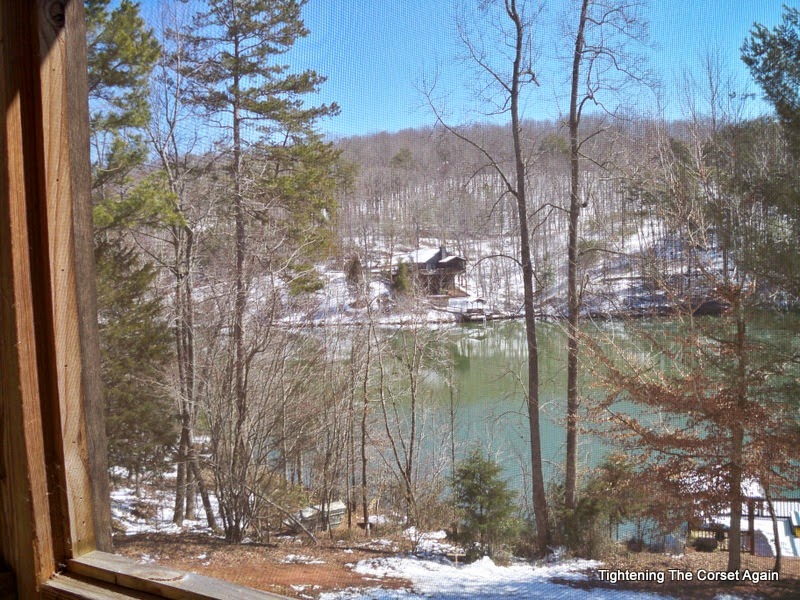 And Lady in the snow. She's been adjusting to Lily being gone. Lily was the one who announced their need to go out and Lady's been having "accidents" in her absence. She's been frolicking like a puppy but pooping on the floor. 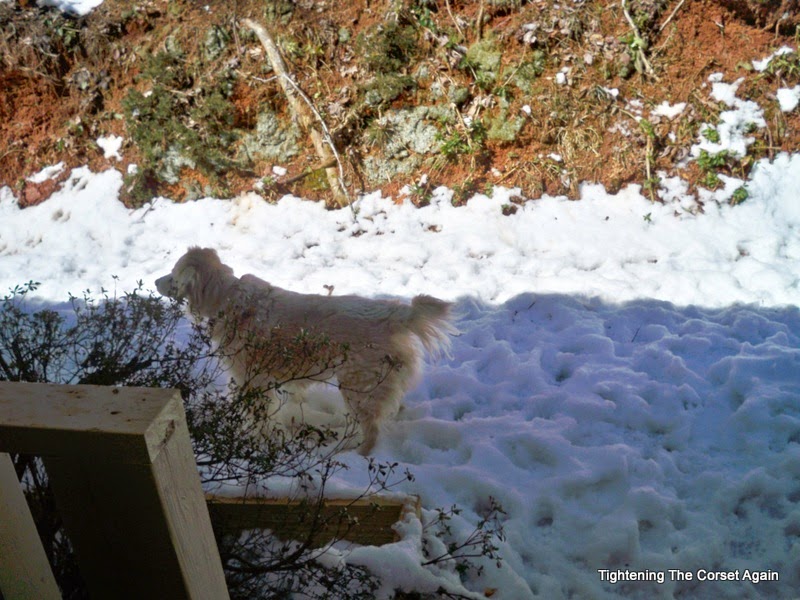 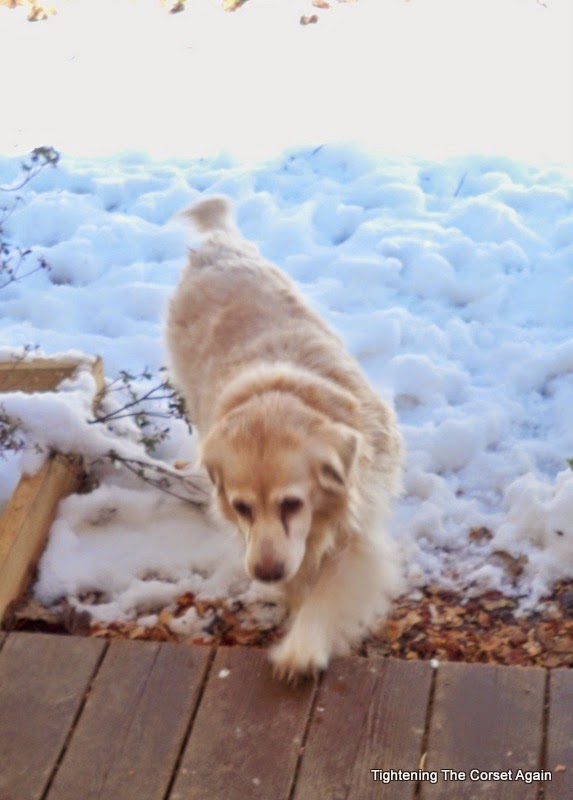 And that's about all I've got for today. Happy weekend, y'all!