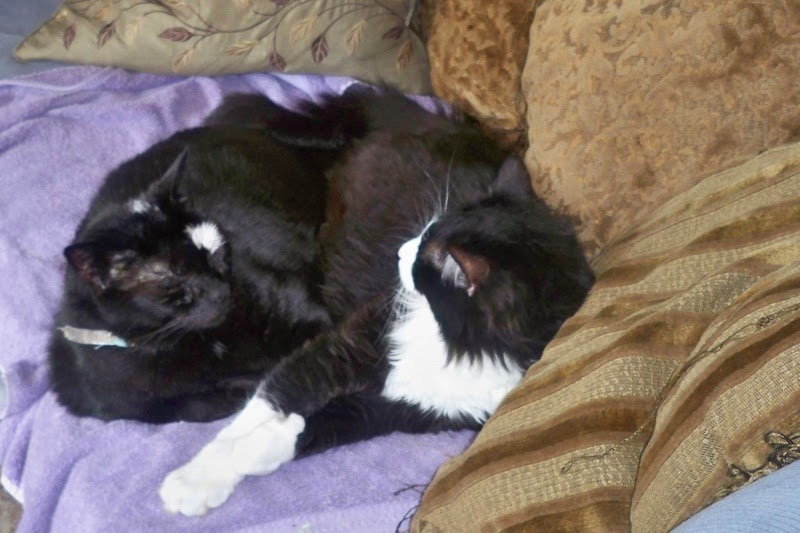 I got up this morning and brushed my teeth and got dressed and took my meds... except I took my night time meds instead of my morning meds. You know, things like ambien and other things that make me sleepy. I took a long nap midday and now I'm just all discombobulated. It's just been that kind of week.

The Unidentified Gut Pain survived diagnosis through yet another diagnostic procedure. The CT scan shows fatty liver (which we knew, based on my lab results), an ovarian cyst (which we knew) and constipation. The male nurse who called to give me the lab results said, "so, everything is good. Just give us a call if you have any further problems". I said, "ok. Here. I'm telling you now that for at least a third of my life for the past 20 months I have the same pain in the same place and take the same strong pain meds without relief. Dr. Newton said we would figure out what's causing the pain and we haven't yet so.... " And he set me a follow up appointment. I don't want there to be anything wrong with me but it's impossible that the tiny cyst I have is causing this much pain. And it's impossible that constipation is causing the pain because it gets worse when my system is... um... tmi... emptied out. So that's frustrating that we still know nothing.

No response yet from the judge about changing my hearing date. The girl in my attorney's office said that it's almost certain that he will but in the meantime we can't purchase plane tickets, etc. 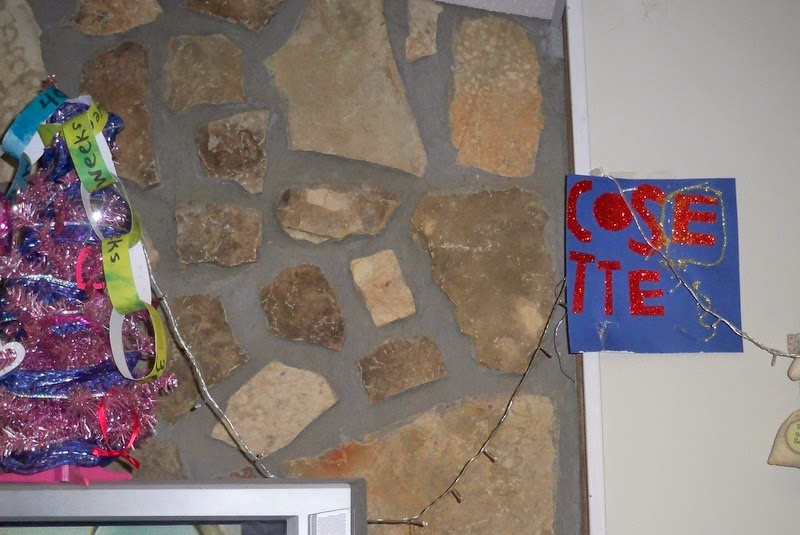 Cosette is doing well. Note how short her countdown chain is! Her guesstimated weight is 5 lbs 14 oz and she is at 36 weeks gestation. Austin and Tasha had another big disagreement this week but they have resolved things, I think. I just keep telling him to be calm. His role in life right now is to be the calm in the storm for Tasha. Becoming a mom for the first time is terrifying. I had been around babies all my life and I still had major anxiety about doing things right. Facing labor and delivery is scary. I mean, it's just a big ole don't-know-fest. They did receive an amazing gift from Uncle Bryan and Aunt Helen. I'm telling you - baby items have changed since I was having babies. Our swings had a metallic crank that scared the baby half to death when you wound it up for the music to play. This one they got from Bryan and Helen has five different movements at four different speeds and you can hook your ipad or iphone or mp3 player or whatever to choose the music the swing plays! It's uh-mazing!

Speaking of Uncle Bryan and Aunt Helen... we got these in the mail over the past week: 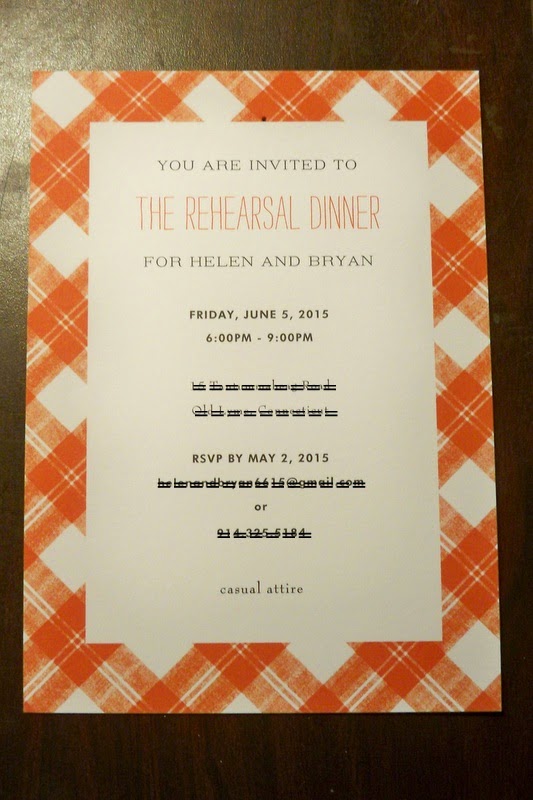 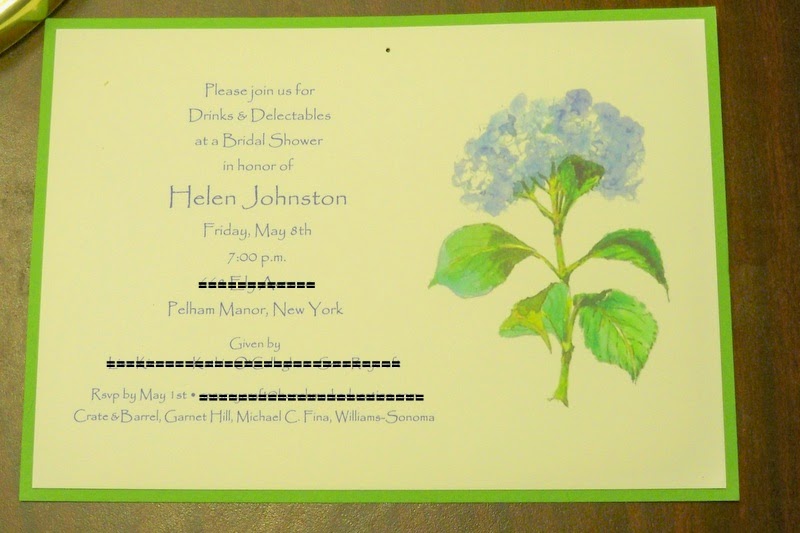 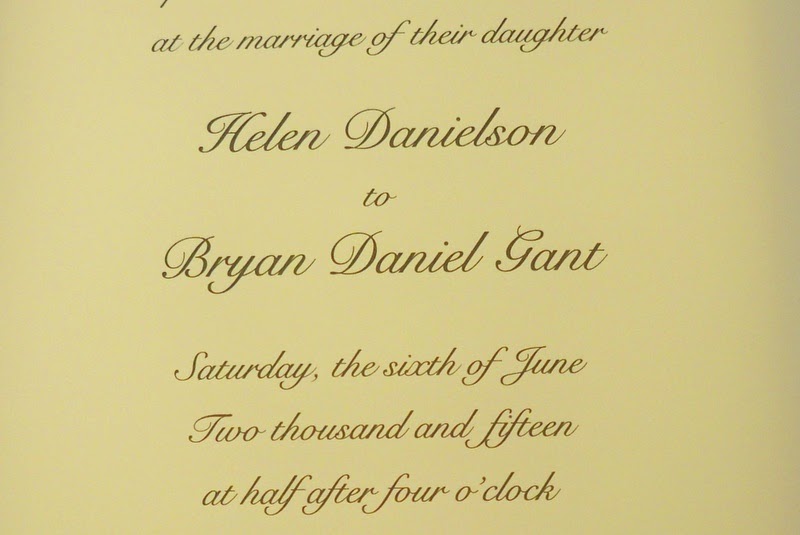 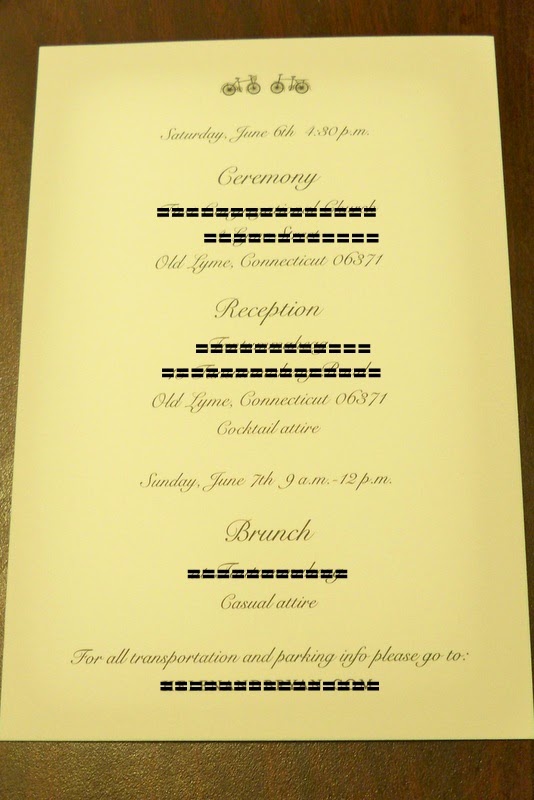 Invitations to her shower in May, the Rehearsal Dinner, Ceremony, Reception and Brunch the day after the wedding.

Mom and I did some shopping this week and found her two awesome dresses and an outfit for the shower. I didn't have any luck. Apparently Belk doesn't sell cocktail/semi-formal stuff for anyone over a size 16. I've found a few things online that I kind of like on Asos.com - their Curve brand has things that fit bigger girls and still maintain a youthful style. I'm also nuts about Modcloth.com - they lean toward vintage / classic looks that I really love. Until we know if I'm going to be able to be there for the Rehearsal Dinner and seeing Wicked and so on, we can't really figure out what I need in my wardrobe. I bought a maxi skirt/open cardigan from zulily.com in a deep purple and I love the color and the feel of the material but the maxi is so big that I could wear it as a strapless dress. And I might. Being short and curvy turns you into sort of a wardrobe McGyver.

I love shopping with my mom and it was good to get out of the house for a little while. The downside was that as we were leaving the store I got hit with a massive migraine that left me pouring sweat, sick to my stomach and absolutely miserable. I had taken percocet that morning around 2am for the Unidentified Gut Pain and it seems that I have these rebounds 10-12 hours after taking percocet. Will have to discuss that with the pain doctor.

Anyways... back to the wedding... my brother was named one of the top litigators under 40 by Law360.com and they did a really awesome article about his achievements and stuff. You can reach it by going here. For those of you who grew up with me it will be a shock to see him go from the kid who always wore a cat costume to this rock star attorney. Even for those of you who don't really know me in real life... I found it really interesting and you might too!

Peanut is now officially Oliver! He had a check up today and prepare yourself... you are gonna melt... he is the most adorable baby boy I've ever seen in utero and looks a lot like his daddy! 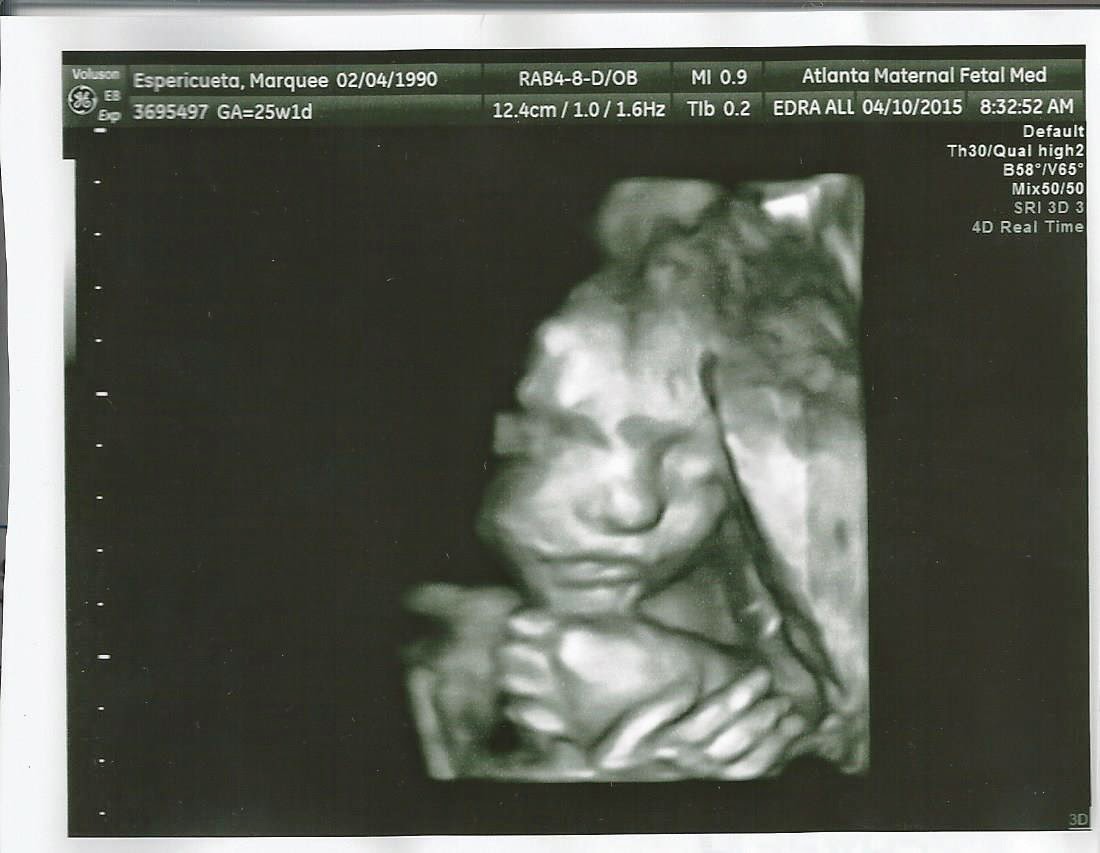 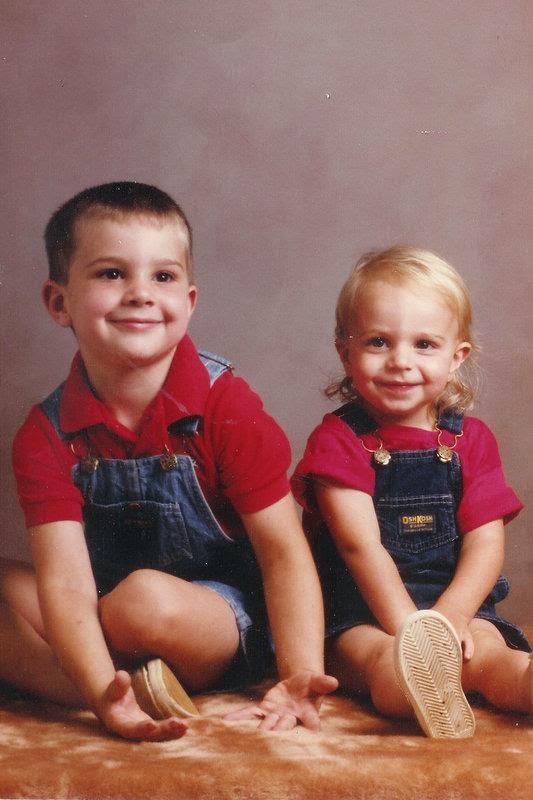 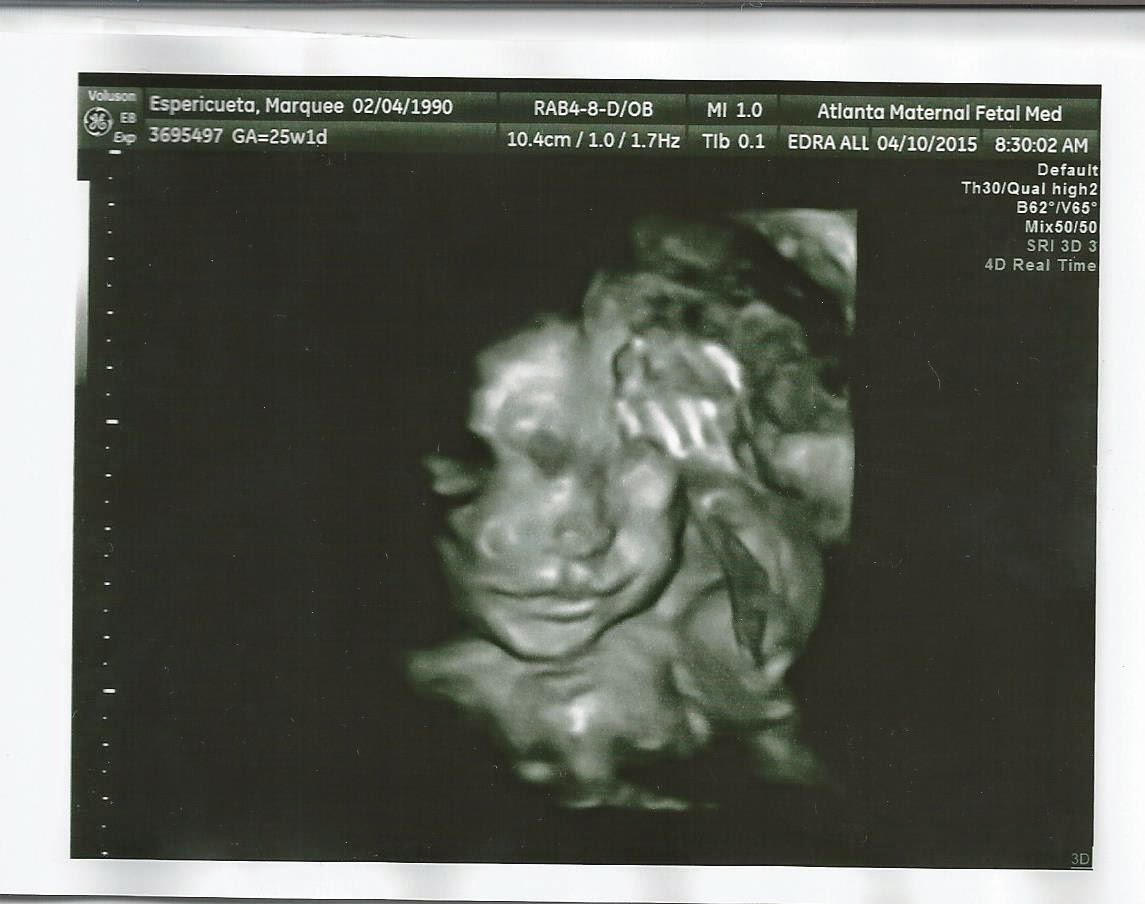 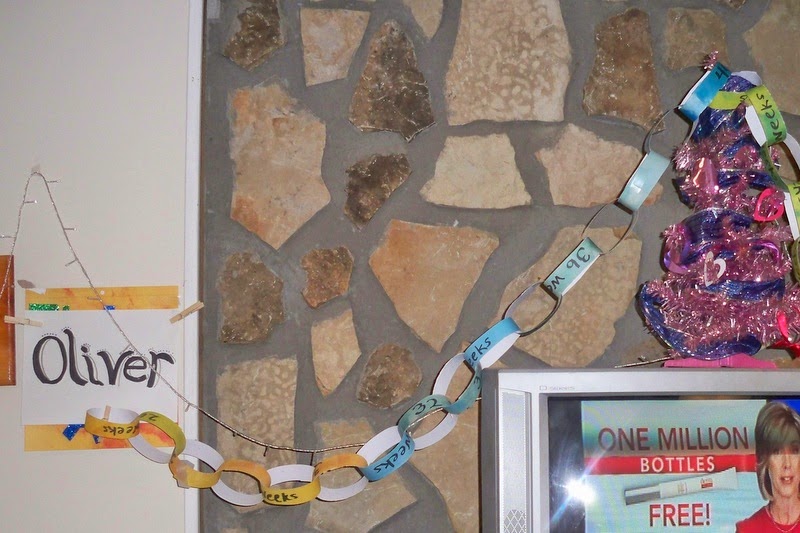 And Oliver's chain is getting much shorter, too! Because he has placenta previa, he will more than likely be a scheduled c-section at 37 weeks gestation which would bring him into the world around the 4th of July.

Invitations for his shower arrived this week. They were made by his other grandma, Marquee's mom. They are amazing! 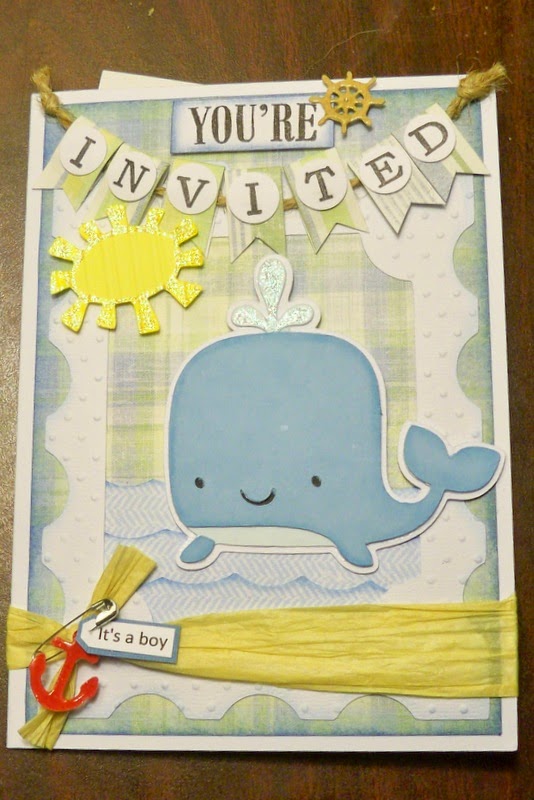 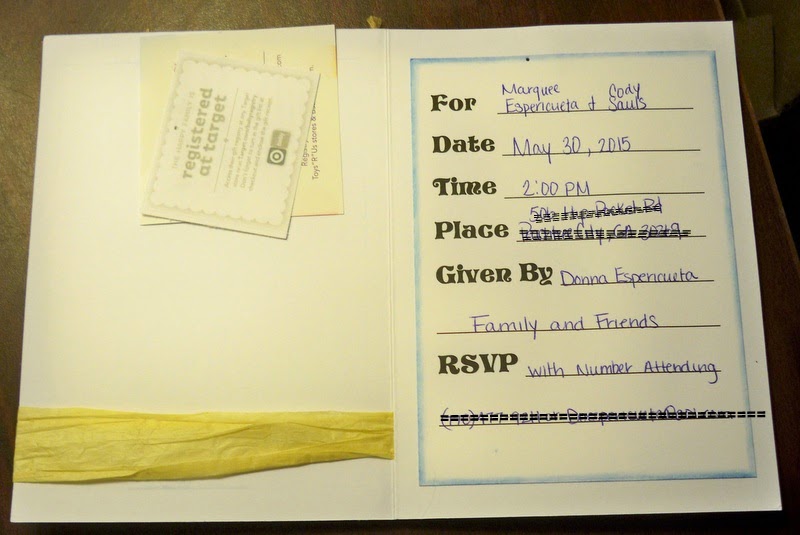 Plans for the weekend ahead are watching the Masters and getting past this round of U.G.P. - unidentified gut pain. My long lost cousin is coming to visit next week with his lady friend. I couldn't tell you when I last saw him. That's the downside of having such a huge extended family, you go decades without seeing each other. But the upside is that there are all these cousins out there!

Hope this week has been good to you! Sorry to be away for so long, pain has ruled the past week but I'm believing for better things next week! Love and hugs, y'all!