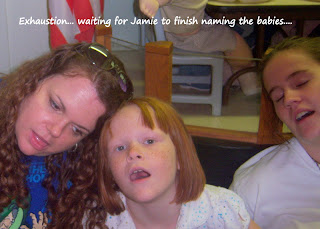 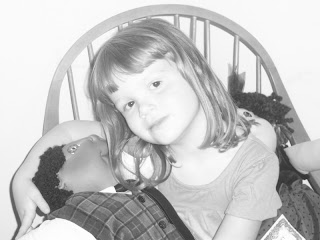 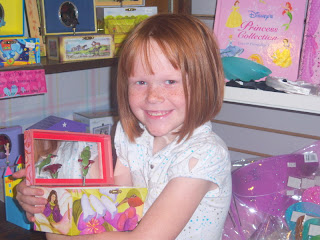 I'm in love with my nieces... just when I thought they couldn't get any cuter... sweeter... more fun... we spend a day playing tourist in our little neck of the woods and they make me fall in love with them all over again.
I started the day by singing our special wake up song... (for those of you who went to Camp Pinnacle in the 70's, you'll remember it as "The Birdie Song")... then we had breakfast. Or they had breakfast while I waited.
Then all four of us... me, Stasha, Sarabeth and Jamie... got into my car and headed to Helen. Helen is a tourist town... lots of little touristy shops... lots of traffic, including foot traffic... and it's kitschy. People who live here generally avoid Helen and subsequently, the girls haven't spent much time there. It is a fun place to visit... when it's not hot and crowded... so, maybe in January?
Our main reasons for going to Helen were to go to the toy store (which is tiny but has great stuff) and to go to see Stasha's parents (who own a jewelry store and a shoe store in town). We spent a LOOOONG time at the toy store... mostly looking at music boxes. The girls went nuts over the music boxes! Sarabeth had to listen to all of them. Jamie mainly focused on the pink ones... especially the ones that had "ballerina ladies" in them. Such a great girl fix for a mommy of boys like me!
We walked through town just a bit... enough to stop in to say hello to Stasha's mom... and to browse (nervously for me) through the (very breakable) Christmas store. I wanted to get some fudge but it was on the other side of the street and traffic was heavy. It was easier to not try to cross the street with two little girls in tow.
We DID, however, go to Hofer's Bakery which has all kinds of "Bavarian" treats. Jamie had a donut... Sarabeth had a linzer cookie (which was covered in powdered sugar! yum!).... Stasha meant to have a linzer cookie but they gave us a donut instead and we didn't catch it until we were out of the store. I had a butter cookie... a huge one... covered in almonds... we sat at a little picnic table outside and enjoyed our treats.
Then... we went to Fred's peanut store north of town... and pooled our change (I didn't have any cash and they don't do plastic) to get some boiled peanuts. Fred's was fun... but we had bigger fish to fry.
We went... for the third time this summer... to Babyland General in Cleveland. It's a magical little old house full of Cabbage Patch Kids dolls... I've described it before... it's free and it's girly girl nirvana! I think we held every baby in the place... we saw two babies "born" and we just soaked it up. It was great fun but exhausting...
We went back to Jim and Angie's to make lunch and rest... I came home with a splitting headache but it was soooo worth it! I realized that I haven't been posting many photos here (as it's just too much trouble) but I included a few cute ones from today... the rest of the pictures are on my facebook.
Hope you had a fabulous Saturday as well... love and hugs, y'all!

I can see why you love your nieces. They are so adorable. I am happy you had a great time.
I collect music boxes and I just love them. I think they would make great gifts for the girls.
Have a super Sunday.