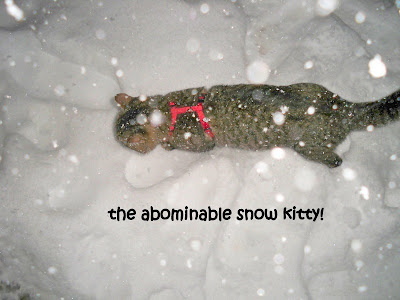 It's Newsday Tuesday... the day when I comment on the news from the nest and beyond...
The biggest news here is the deep freeze we're currently in... schools are closed for another day and it's not looking like i'm going to make it out of the driveway again. We have about six inches of snow on the ground with a nice layer of ice on top. My neighbor made it part of the way out of her driveway and got stuck. Our driveways aren't that long. The kids in the "frat house" across the street (it's not really a frat house but there are about a dozen college age kids living together. They're nice, don't cause any trouble, there are just a lot of them) got out with their 4wd vehicles and made it back safely.
It feels like Groundhog Day. It's my fourth day in a row of being home. I feel like time is standing still. On one hand... I'm enjoying the mini vacay... on the other hand... I'd rather be vacationing somewhere... oh, I don't know... where they have room service... or a beach... or good theatre and restaurants... not that I'm not an awesome cook and not that I'm not enjoying the beautiful scenery but... yeah. Hate to burn my vacation time on snowdays.
In case you were wondering, I'm on 4th day hair. It's frightful. I'll shower here in a bit. The cats are starting to complain. When the cat comes up to you and his nose starts twitching like he's trying to identify a new smell... and you realize that the unidentified smell is you... ok... a shower is in order.
I wouldn't say that I have cabin fever but I actually encouraged someone to call me. On the phone. For a real conversation and not just a text conversation. I hate the phone but I don't think I've spoken out loud since Friday other than to say, "do you needs more num nums?"
The munchies are holding me hostage. I'm eating healthy... and I'm eating my daily points plus a few extra points. Still on plan... just eating more than I'd like or should. That scale needs to move.
They don't think we're going to thaw until the weekend. I'm hell bent and determined to get to work tomorrow. Even if that means finding a guy with a 4 wheel drive vehicle to take me. My friend Alisa came "into town" yesterday and checked in to see if I needed anything from the store. Our provisions are holding out nicely and the power is still on so life is... good.
Today... I guess I'll just do more of the same that I've been doing... the view from the nest doesn't really change much... pepto bismol pink recliner, electric blanket, coffee or ice water nearby, remote, laptop... yesterday I watched the endless news coverage of the storm. This morning i'm watching the news reports of people who braved the icy roads and have been stuck in massive traffic jams for hours. Stupid people.
I'm craving an egg mcmuffin.
I turned off the wall to wall storm coverage last night to watch the BCS Championship game. You know how I love my college football! It was a good game and my conference won again. If I was a drinker (and i'm notsomuch)... I could have still gotten tipsy off the Tim Tebow drinking game... the way it works is ... you take a shot for every time they mention TT's name. With Urban Meyer as one of the commentators... I could have gotten a good buzz going. There's a new commercial out where Timmy talks about his naysayers. I. absolutely. love it. From the time he was a child in his mother's womb, when the doctors told her to abort because there was no way he could survive... all the way through the conversation I had with Crunch and Munch about how he is "not an NFL quarterback"... (which really hacked me off, btw) people constantly talk about what he CAN'T do while he just keeps on proving them wrong. That commercial made my day.
That... and the snow plow that I posted.
This whole thing about the shooting in Arizona... and they're blaming Sarah Palin? Really?
So... that's the news from the nest today. Shower. TV. Online gaming. That's all I've got going on.
What's new in your world?

We're iced in here as well. Doug hasn't evn ventured out in his 4wheel drive. He started a 3-day fast yesterday (leading up to the Daniel Fast) and so far, so good. I was worried he qould get weak and dizzy and fall off a ladder, but the Lord provided - no ladder in sight, you know?!?
We've heard folks drive by, and then my neighbor a 1/2 mile down the road will post on FB that another car has entered the intersection at her house going too fast and has wrecked. State Troopers closed all roads in the county last night. Just too much ice. Plan to just stay in again today, but might actually work from home today. I figured I was ready for a free day yesterday, so I didn't work then. Shannon has been at the hospital since Sunday night. I hope she'll be able to get home today, or at least make it to mom and dad's. Franklin was out on storm duty but he's home now (no widespread power outages) but he can't make the trek up 75 to get her. I'm sure she's going stir crazy, particularly since she's not scheduled to work today.
Have a good, quiet day. You'll need it when you get back to work!
Ly,
Mary