The weather has turned to Spring/Summer around here and I've been enjoying some time in the porch swing and the rocking chair out of doors. We never really get a gradual warm up. It goes from too cool to sweltering in the space of a week. This afternoon while in the car on the way to the store I thought I was going to have a heat stroke.

I slept with the living room window open last night thinking that it wasn't going to get that cold and wouldn't impact me back in my bedroom. My bedroom is where the double windows are. The living room window is between the door and the sliding glass door, way down at the end where Pop is sitting working on Mom's fishing rod. (Ignore that bit of information if you're a stalker).

Anyways...then Little Kitty had a complete spaz attack trying to catch something creepy crawly on the ceiling at 3am. He knocked off the lamp, a book, my Nook, a bottle of water and was doing his dead level best to climb the wall. Seriously... he was trying to be Spidey-Cat. The only way to get him to chill out was to go sleep on the couch and close my bedroom door. If I wasn't such a Cat Lady I would have just put him outside the bedroom and closed the door. Instead I slept in the living room which was downright chilly. We have a stack of blankets in the living room taller than me and I was shivering under my two little blankets. Never crossed my mind to get another blanket and closing the window is a two person job because we have the upper portion of the window open and it has to be raised from the outside while someone on the inside locks it in place. I'm not sure that it's supposed to work that way but it does so shutting the window at 3am was not an option.

The upside was that I was awake to see a 4am showing of The Long, Long Trailer on TCM. It's a fabulous Desi Arnez/Lucille Ball movie that I have to watch at least once a year.

I just nagged Austin about something that I knew would aggravate him so that he would stop chatting and I could blog/watch The Five uninterrupted. Kid sleeps twelve hours a day and talks non-stop the other twelve. Maybe that's not great parenting but Mama needs a little peace and quiet.

I let Austin drive for a short distance this afternoon. We are in need of prayer. He is a long, long way from being ready to drive. We're talking... ten miles an hour and still running off the road. I was sure he was going to hit my parents' car as he was parking. Mercy.

He has a meeting next week to be evaluated for technological assistance that he could qualify for due to his autism. The lady was really excited to find out that he has a smart phone and access to computers here at home.

I finally got word today that I qualify for the free clinic. I have lab work on the 16th and an office visit on the 22nd. Here's my thing - instead of having a government sponsored health insurance brokerage coupled with a new tax to insure a tiny fraction of the people who don't have insurance, a program that is not fiscally sustainable... why not just help fund programs like this that care for the people who fall in between the cracks? I'm so grateful for this opportunity to receive medical care... grateful to the folks who established and fund and volunteer their time... and grateful to God for allowing me to live in a community that takes care of its' own.

We got some trees cut down yesterday. That was exciting. Also exciting - the large amount of firewood.

Austin does a much better job of driving the riding lawnmower than he does driving a car. Maybe his first car should be a golf cart. Wrapped in bubble wrap.

I know I've probably told this story a thousand times but every time I think about golf carts I'm reminded of the time that Purple Michael and I went out for a ride on a golf cart in Peachtree City. Peachtree City is a planned community that is connected by golf cart paths. You can literally drive your golf cart to the grocery store or to restaurants or even to the chiropractor. (I did that once but don't recommend it... you get all out of alignment again with all the bumps on the way home.) We wanted to get to Fuddruckers but couldn't figure out how to cross the big highway to get there. We took what we thought was a shortcut through some land that was under development. The ground was super, super soggy and the golf cart quickly got bogged down in mud. I jumped out of the golf cart and suddenly realized that the ground was covered in worms - apparently to aerate the soil - the ground was literally crawling with them - even the nearest road was covered. Michael and the kids tried to pull the cart out of the mud and it toppled over while I was trying to keep the worms off of me! It was absolutely insane and hilarious.

There was another time I fell off the back of a golf cart while wearing a dress and got all kinds of road rash on my legs. I did not, however, drop my wine glass.

I'm good like that. I once slid down the steep hill that my kids' other grandmother lives on. I was holding two kids at the time - Ryan was about five and Cody was about one - and neither one hit the ground. I fell one time in Cracker Barrel carrying Ryan when he was about six months old. I hit the ground hard but he didn't. Another time I fell on an icy road carrying Ryan when he was a toddler. I hit the pavement hard but Ryan didn't. I owe my worthless spine to being a really good mom.

Today while walking down the outside stairs (which are a little steep) I felt something pop in my left knee and I can't stand to bend it now. Because I didn't have enough stuff to whine about.

And that's what's up this Wednesday. Love and hugs, y'all. 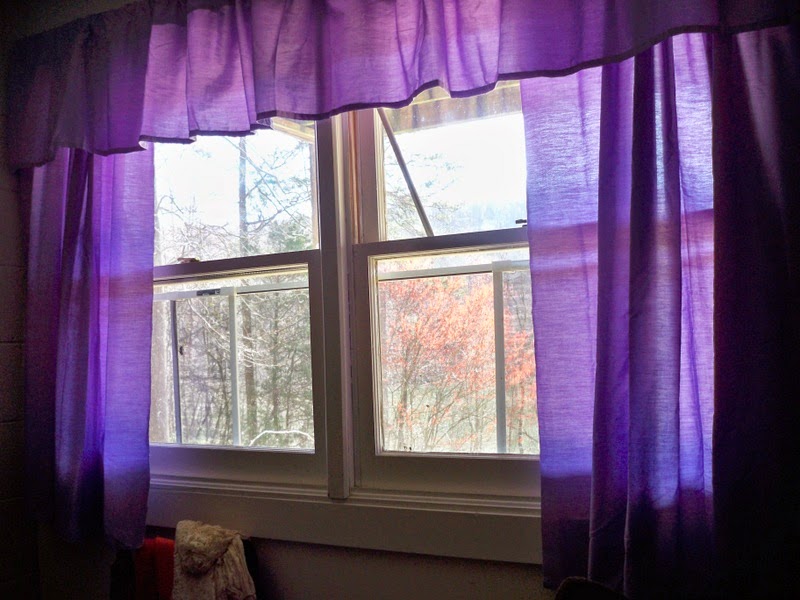 The colors looking outside of my bedroom window are just starting to show and in real life, it looks so beautiful framed by my purple curtains (that my mom made). My little digital camera couldn't capture it but you can use your imagination. 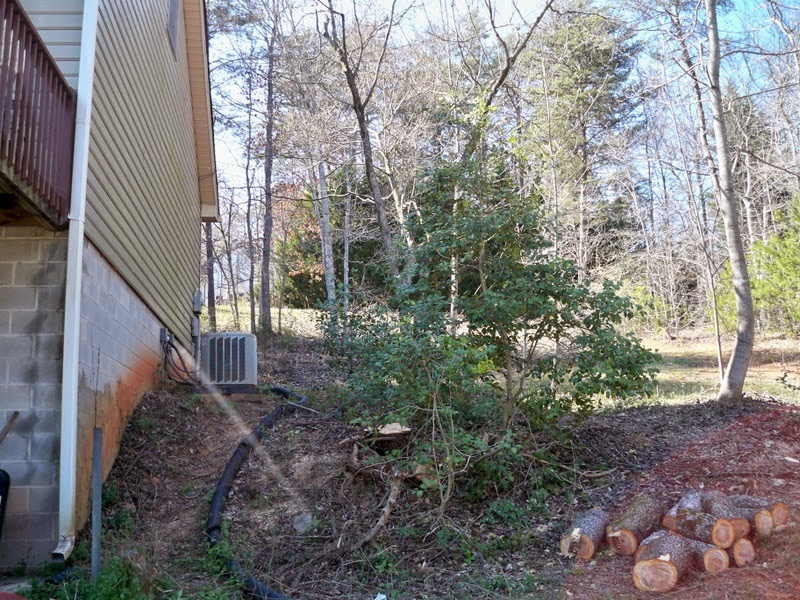 The side of the house without the big tree brushing too close for comfort. It was borderline whether or not the insurance company would have approved and it was always in the plans to be removed. Just took awhile to find a reputable and available tree guy. 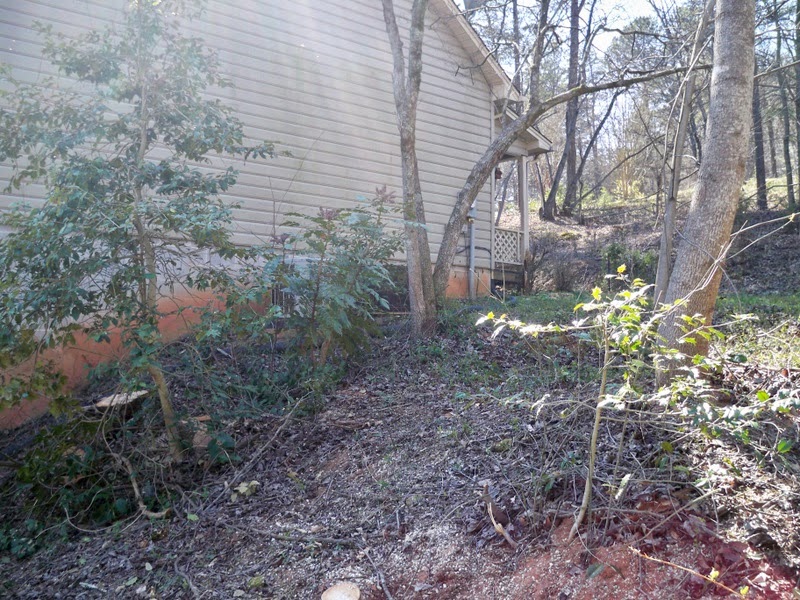 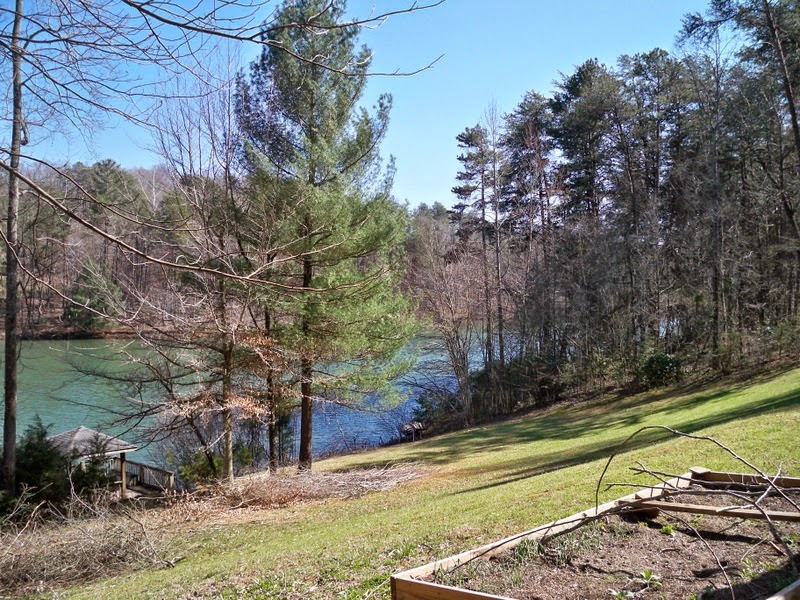 Never gets old. Ever. 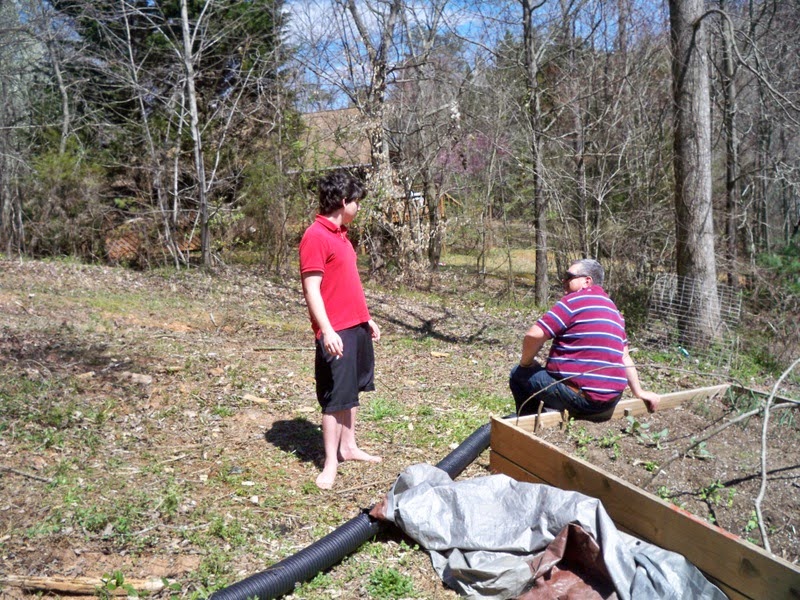 Pop pops a squat on the edge of the raised garden while chatting with Austin. Who is barefoot. Always.